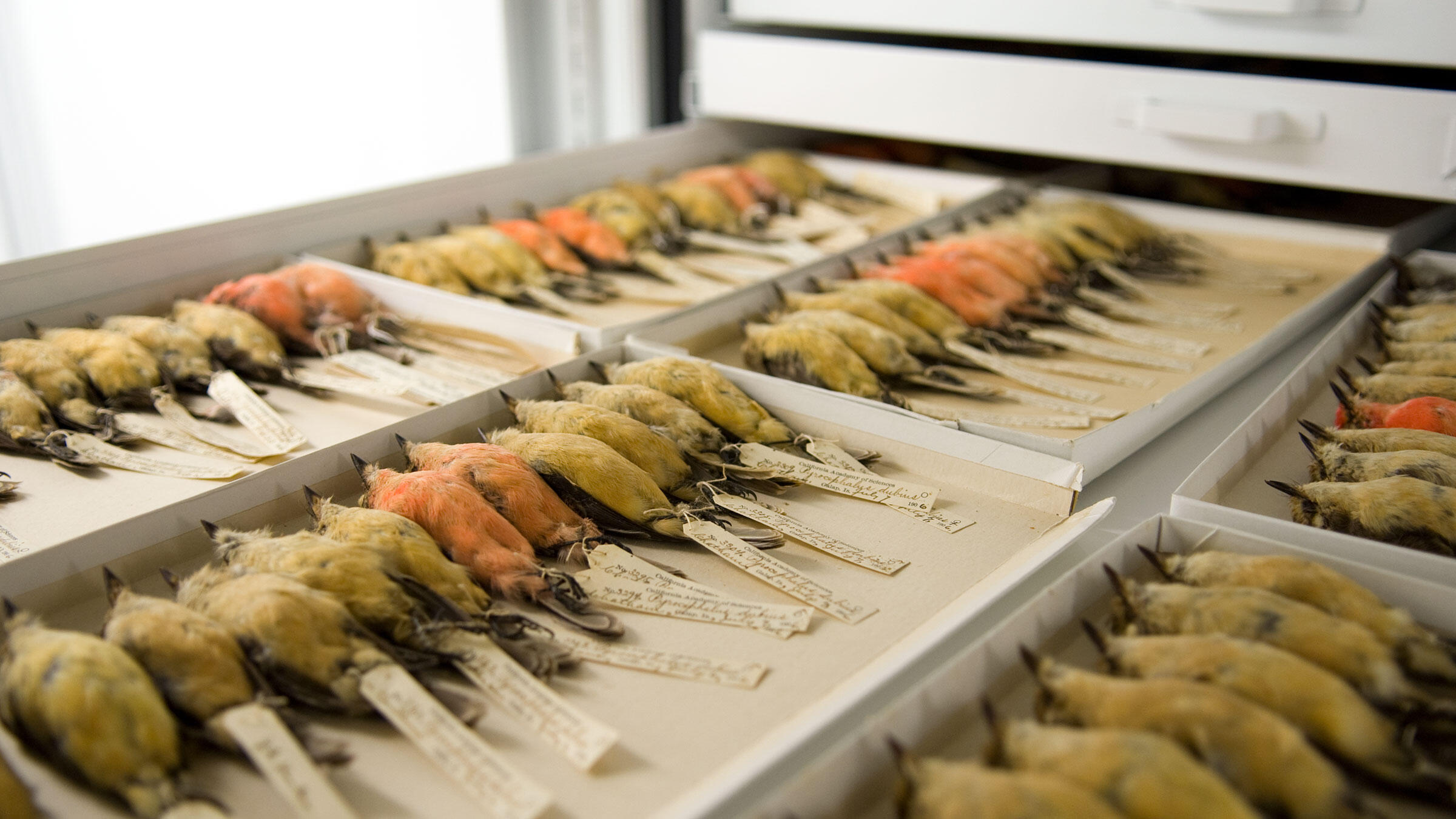 Preserved specimens of the San Cristóbal Vermilion Flycatcher, a newly described (and quite possibly) extinct species from the Galapagos, among other flycatchers. To human eyes, both males (red and black) and females (yellow and black) are physically identical to their mainland counterparts. Photo: Courtesy of California Academy of Sciences Ornithology Collections

The Galapagos islands lay claim to some of the world’s most extraordinary plants and animals: Around 97 percent of its land mammals and reptiles can only be found on the archipelago, as well as 80 percent of its birds—with one major exception. The Vermilion Flycatcher, a shocking-red passerine, resides in much of North and South America, while also holding property on the 20-island chain. Despite its commonality, the bird is extremely diverse, boasting 12 subspecies across its range.

“It’s really widespread, and it’s really pretty so people notice it; it’s a bird you get to know a lot, and you get really comfortable with it,” says Alvaro Jaramillo, a biologist at the San Francisco Bay Bird Observatory.

But nature is full of surprises, and as Jaramillo now knows, so is the flycatcher. The scientist and expert birder makes regular visits to the Galapagos to conduct research and partake in expeditions. In 2007, he spotted a Vermilion Flycatcher that appeared, or at least sounded, different from those on Ecuador. “I saw one displaying and singing, and its song was nothing like the [other] ones. I thought, ‘well, that’s weird,’” he says. He remembered that flycatchers aren’t capable of mastering new songs; instead they’re born with a preset melody. That led Jaramillo to make a possibly crazy, possibly plausible conclusion. “For me it clicked—that the Galapagos flycatchers are a different species.”

To prove its existence, however, Jaramillo needed more than just a song. He contacted a few colleagues at the California Academy in San Francisco, which houses 96,000 bird specimens, including Galapagos flycatchers. From there, Jaramillo and researcher Ore Carmi began piecing together the evolutionary history of the species through DNA testing. Over many years, the team sampled specimens from 10 of the 12 subspecies of mainland flycatchers and compared their genes against those from the Galapagos. Their ground-breaking results (first reported last month in Scientific American) are set to be published in Molecular Phylogenetics and Evolution in September.

The genetic tests showed that though the Galapagos birds looked identical to their mainland cousins, they were in fact a different species. Even better, there was a second unique species of Vermilion Flycatcher hidden among them: Pyrocephalus dubius, which resided only on the island of San Cristóbal. The euphoria of discovering two new birds was short-lived, however, when the team realized that the San Cristóbal flycatchers had not been seen in more than a decade. Historically, the species was considered a rarity on that island, with various sightings dotting the 1900s; but now the bird appears to only exist in the annals of Galapagos fauna.

“So many people are visiting the Galapagos and looking at things, but it went extinct right under everybody’s noses,“ says Jaramillo. Likewise, the Galapagos Vermilion Flycatcher, or Pyrocephalus nanus, is on a downward trend, with populations as low as 20 birds on one island. Other birds on the archipelago, such as the infamous Darwin’s finches, have also declined over the years. What could be causing the region’s biodiversity to take a dive?

The opinions vary, but there are a few agreed-upon theories. One likely culprit is a devastating, miniscule fly known as the Philornis downsi. “This parasite—I mean it’s a really horrible parasite—just looks like a house fly as an adult,” says Frank Sulloway, a professor of psychology at the University of California Berkeley and expert on the insect.

P. downsi is common in Ecuador and may have arrived in the Galapagos sometime during the 1960s by hitching a ride on shipping vessels that were delivering produce. Once they became an island mainstay, the parasites began to target any nesting birds they could find. Downsi flies lay their eggs in nests, where larvae grow within the nostrils of the hatchlings, feeding on keratinous beak tissue inside the nasal cavity. Once the larvae mature, they begin to feed on the blood of chicks, resulting in up to a 55 percent blood loss overnight and a 56 percent reduction in body mass over time in the birds. This can cause a 100 percent brood failure, according to the Galapagos Conservancy, particularly in Mangrove Finches and Floreana Mockingbirds.

Still, Sulloway isn’t confident that the fly is the primary cause of the diminishing bird populations. He’s conducted field research in the Galapagos, studying invasive species and ecological changes on the islands. During his research, he found that Vermilion Flycatchers build their nests closer to the trunks of trees instead of limbs and branches, like most other avians. This gives hungry rats—also a major invasive on the islands—easy access to their nests. Sulloway also points out that the flycatchers’ habitat may be in short supply, due to the removal of native plant species by locals and farming in the highland regions. He estimates that around 90 percent of the natural forest on San Cristóbal has been destroyed.

Sadly, the history of the San Cristóbal flycatcher was over before it even began. But Jaramillo sees the tragedy as a call to arms for conservationists and scientists. “Sometimes, there’s a lot to be learned by just focusing on the things that are around us all the time," he says. “How do you keep things common instead of having them slip to another level of rarity?”