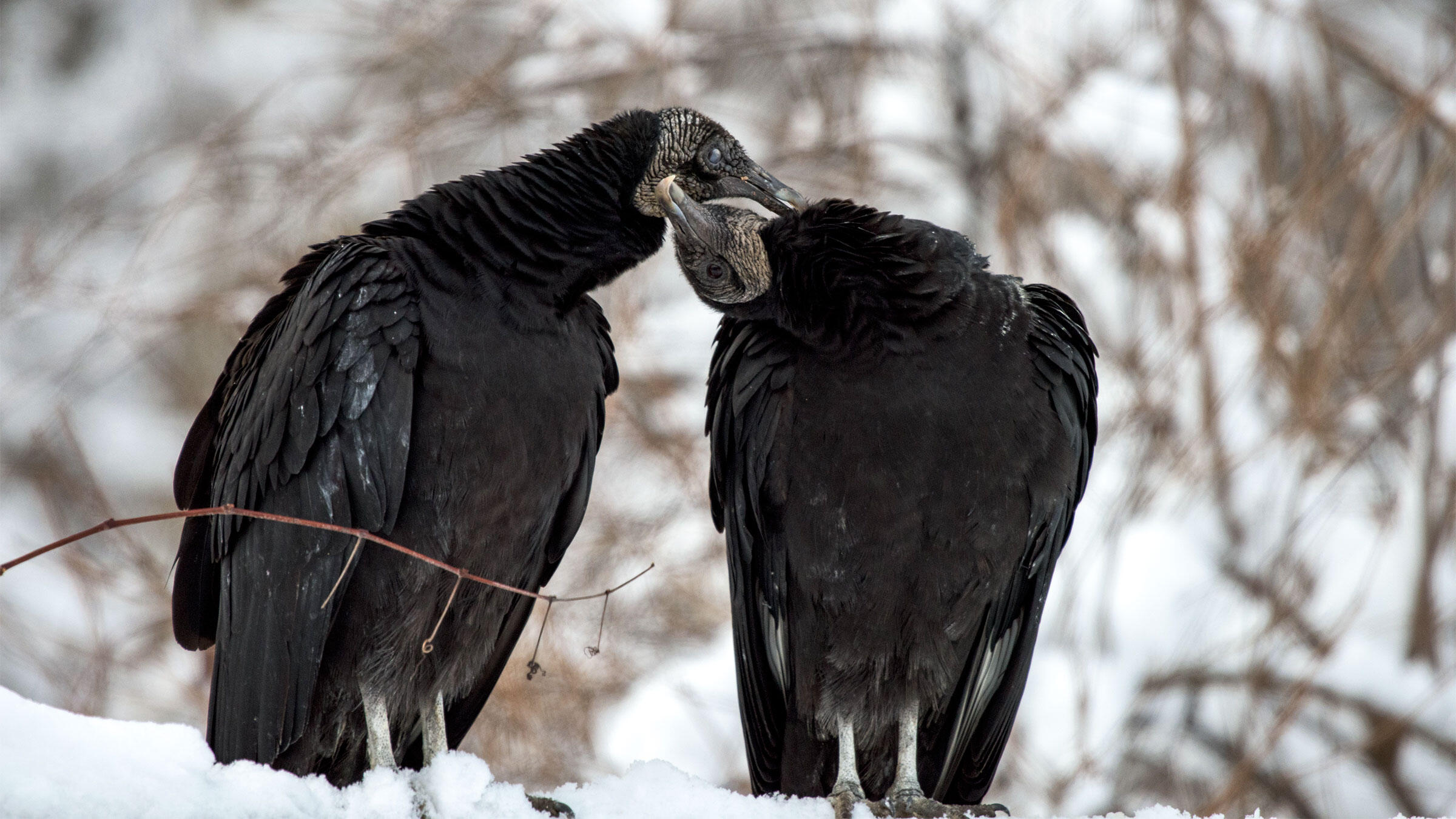 Till Death Do Them Part: 8 Birds that Mate for Life

Love is in the air. This Valentine’s Day, take inspiration from some of the great bird species that mate for life. Here are just a few examples of the many winged wonders that fall into this category.

Average clutch size: 2 eggs
Cool fact: This vulture species doesn’t build a nest, but rather lays its eggs on the ground or in hollow cavities.

Yes, even Black Vultures stick together. “One bird, presumed to be male, chases a presumed female through the air and periodically dives at her” as part of the mating ritual, according to Birds of North America online. They form such a tight bond, in fact, that they hang out year round—not just during breeding season.

Average clutch size: 1-3 eggs
Cool fact: Measuring six feet across and four feet tall (or even larger!), Bald Eagle nests are some of the largest of any avian species.

These birds, the symbol of the United States, mate for life unless one of the two dies. Their spectacular courtship rituals are a sight to see, with the birds locking talons, then flipping, spinning, and twirling through the air in a maneuver called a Cartwheel Display. They break apart seemingly at the last moment, just before hitting the ground.

Laysan Albatrosses, which don’t breed until they’re eight or nine years old, are monogamous, annually solidifying their bond through ritual dancing. “If they do lose their mate, they will go through a year or two of a mourning period,” says John Klavitter, U.S. Fish and Wildlife Service biologist at Midway Atoll. “After that, they will do a courtship dance to try to find another mate.”

Average clutch size: 5-7 eggs
Cool fact: During mating, the black knob at the base of a male’s bill swells up on these extremely territorial birds originally introduced from Europe.

Mute Swan pairs reportedly stay together for life. However, divorce does occur in less than 3 percent of mates that breed successfully and 9 percent that don’t. They re-mate when a partner dies; how quickly this happens depends on the survivor’s gender. Females find a new male within as few as three weeks. Males, however, tend to wait until the following fall or winter—allowing time to defend their nests and finish raising their cygnets.

Average clutch size: 2-4 eggs
Cool fact: These birds can live to be 75 years old in captivity or, on average, 33 years old in the wild.

Typically these rainbow-colored birds spend their lives together. They even preen each other and their young, picking bugs from their feathers. Scarlet Macaw parents, which reach sexual maturity sometime between age three and four, won’t raise new chicks until their previous ones have fledged and are independent.

Average clutch size: 2 eggs
Cool fact: Not surprisingly (when you get a look at the legs), this crane species is the tallest bird in North America.

Talk about a mating dance, Whooping Cranes—which are monogamous and mate for life—bow their heads, flap their wings, leap and bounce off stiffened legs all in the effort to secure a partner. This pairing off usually happens when the birds—which are red on Audubon’s Watchlist—are between two and three years old.

Average clutch size: 1 egg
Cool fact: When a Golden Eagle is around, this condor species—normally the dominant scavenger—will leave the carcass for the other bird and its seriously strong talons.

It takes California Condors, highly endangered birds on Audubon’s Watchlist, between six and eight years to reach sexual maturity. Once the birds mate, they stay together for years if not for life. During courtship, aerial displays bring the pairs to several nest options—kind of like searching for a potential home. The female, of course, has the final say in where the birds settle down.

Average clutch size: 1 egg
Cool fact: Puffins can fly up to 55 miles per hour, flapping their wings 400 times per minute.

These pigeon-sized “clowns of the sea” don’t breed until they’re between three and six years old. Once they do, however, Atlantic Puffins stick with their partners for good, returning to the same burrow each season, sharing egg-incubating and parenting duties, even performing what’s known as billing, during which the birds rub together their beaks. For more great information about Atlantic Puffins and Audubon's conservation work to protect them, check out Project Puffin.