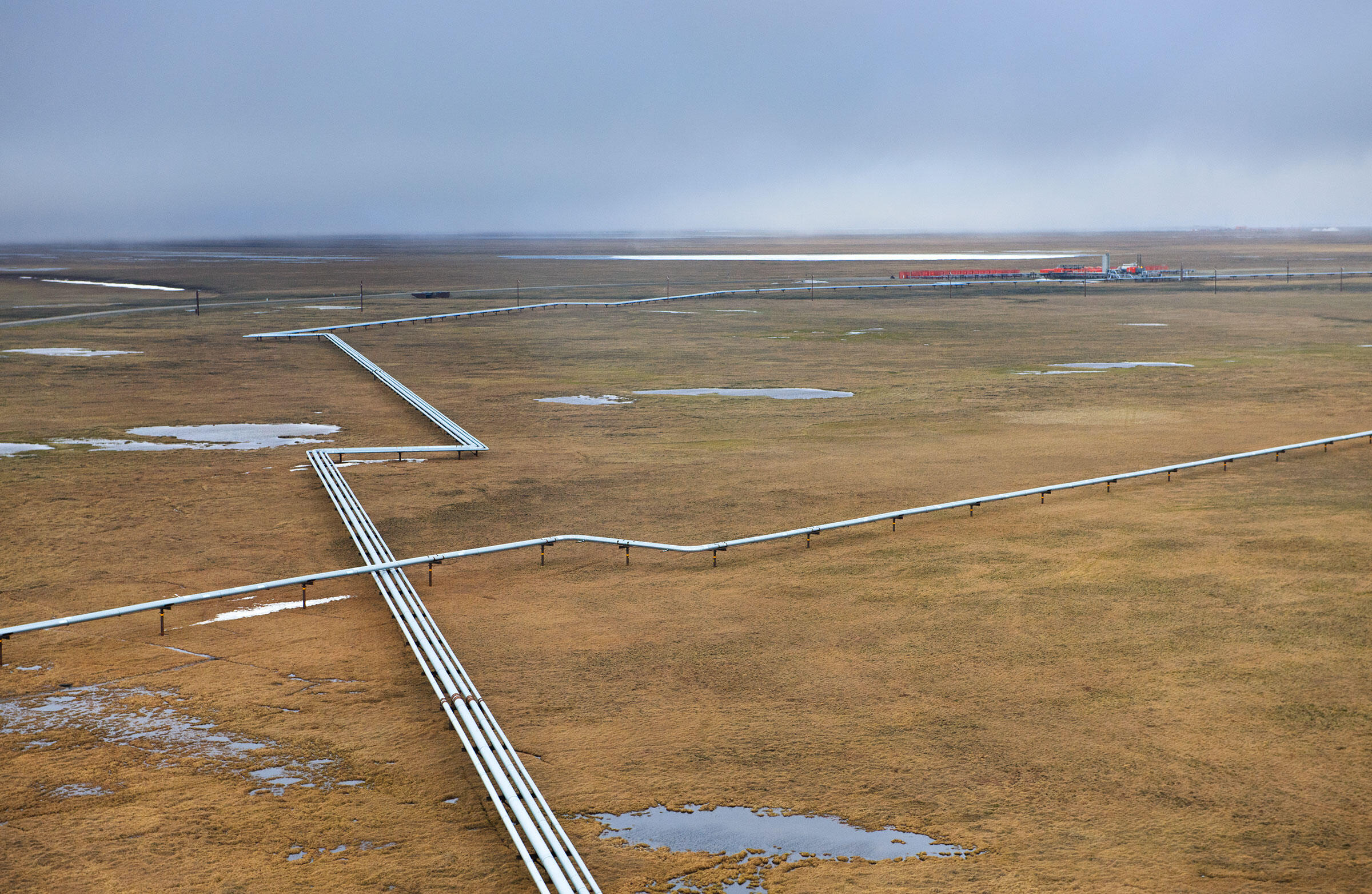 The Prudhoe Bay oilfield, the largest oil field in North America, reaches over 100 miles between its western edge and the Arctic Refuge. A large network of roads and pipelines crisscrosses the coastal tundra. Photo: Florian Schulz

If you want to experience what North America was like before industrial development, you couldn’t do much better than a visit to the Arctic National Wildlife Refuge. A fully intact ecosystem, the refuge’s 19 million acres host mountains, rivers, forest, and coastal tundra—a primeval wilderness in the northeastern corner of Alaska protected by the federal government.

But it’s not easy to get there. Currently, no roads run to or through the refuge; the only people who live nearby are native Inupiat and Gwich’in subsistence hunters, along with any intrepid birders, hikers, and hunters who make the journey. As a result of this isolation, the refuge supports healthy, dynamic populations of large animals like caribou, musk ox, moose, bears, and wolves, and birds migrate from across the world to nest on its fertile plain far from human development.

For decades, a threat to this isolated wild place has grown just 100 miles to the west. There, in 1968, oil was discovered beneath the coastal plain of Prudhoe Bay, igniting a liquid gold rush in northern Alaska. The 1.5-million-acre coastal plain of the Arctic Refuge, known as the "1002 area," is part of the same landscape as Prudhoe Bay’s oilfield, the largest in the U.S., and proponents of drilling—namely, Alaska’s Congressional representatives and its oil-industry allies—have long desired to drill there, too.

Now, they have their best shot yet, as the Trump administration pushes Congress to open the refuge to drilling to pay for tax cuts. The House has already passed a budget including language that would move to sell oil and gas leases in the Arctic Refuge. If the Senate passes a budget with language to match, the refuge's first roads might soon wind through coastal wetlands to allow oil companies to drill wells and explore for oil. 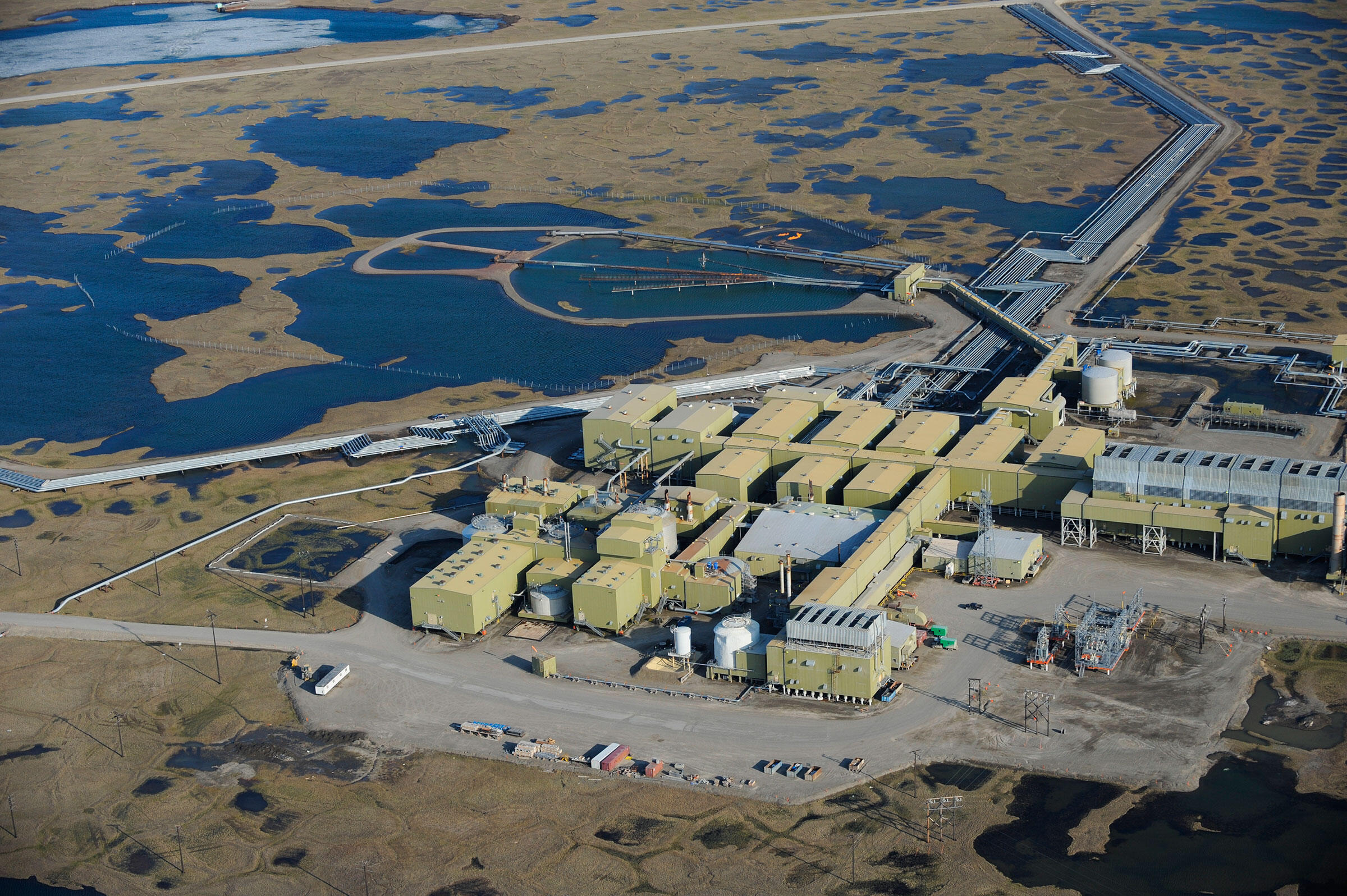 At the Prudhoe Bay oilfield, buildings sit on top of permafrost tundra where 70 species of birds nest. Photo: Florian Schulz

To justify drilling in the untrammelled wilderness of the coastal plain, a critical nesting area for 70 bird species, proponents are forced to argue that drilling and wilderness can coexist. Drafted legislation in the House and Senate promise that any drilling infrastructure built on the refuge’s coastal plain will cover no more than 2,000 acres of surface area. But anyone who’s been to Alaska’s northern coast doesn’t have to look hard to find evidence that even 2,000 surface-area acres of infrastructure would irrevocably transform the area. “What it faces is very real,” says Susan Culliney, Audubon Alaska’s policy director. “You just have to look next door to Prudhoe Bay to see what that might mean for the landscape.”

To access oil deposits at Prudhoe Bay, companies had to invent new ways to build roads, pipelines, and buildings on top of permafrost without causing it to thaw and collapse. To do this, they build on top of 10 feet of gravel and space out development to protect the frozen soil from any generated heat. As a result, roads and pipelines carve up the tundra-wetland landscape to connect wells to flow stations to processing facilities to airstrips—a spiderweb of infrastructure plain to see by satellite.

Technically, this sprawling infrastructure directly impacts some 18,000 acres of Prudhoe Bay. But if you were to draw an outline around the oilfield to include its full footprint—including the pockets of tundra tucked between roads and buildings—it extends over 217,000 acres, or 340 square miles. “Remote sites all have to be connected to the main system,” says Stan Senner, vice president of bird conservation for Audubon’s Pacific Flyway, who’s spent time at Prudhoe Bay. “The more nodes there are to that development, the more sprawling it is. Even with the best of technologies, it becomes a spiderweb of infrastructure.”

Oil exploration would leave a similar footprint on the Arctic Refuge’s coastal plain, Senner says, as those 2,000 proposed surface-area acres branch and stretch across swaths of tundra. Directional drilling—a technology that is often touted as one that requires fewer drilling pads because of its ability to access multiple oil deposits underground from a central location—still would require a sprawling network due to limited reach. And plenty of required infrastructure, including power lines and pipelines, don’t require direct contact with the tundra’s surface, and so wouldn’t be included in that 2,000-acre limit. To prove his point, Senner has created a hypothetical map of how much of the coastal plain could be developed in just 2,000 acres of surface area. It shows the entire region covered with branching roads and drilling sites.

“There is no such thing as a wilderness–oilfield,” Senner says. “You’ve either got wilderness, or you’ve got an oilfield.”

Indeed, the mere presence of people changes the ecosystem, most visibly by attracting predators. Structures create nesting space for raptors, and trash is an easy source of food for brown bears, arctic foxes, and Glaucous Gulls that prey on eggs, nestlings, and fledglings. “If they’re lingering into the nesting season, they’re going to hammer whatever ground-nesting birds are nearby,” Senner says. One new predator related to development at Prudhoe Bay is the raven. Audubon's annual Christmas Bird Count never saw any birds until the oilfield was built. Now, ravens stay there all winter long.

Prudhoe is also a useful experiment in how infrastructure affects permafrost hydrology, which in turn impacts coastal-plain wildlife. According to a 2014 study, some 1,700 acres near Prudhoe Bay are now flooded because roads and pipelines prevent water from running off to the sea. Gravel and debris litter hundreds of acres, and more are scarred by off-road tracks. All of this affects how snow drifts in the winter, and where water pools during melt each summer—which then influence plant and animal life. However, no detailed vegetation studies have been conducted, so the specific impacts are unknown.

But perhaps the most worrying impact of development is one that’s harder to see: permafrost thaw. Despite the oil industry’s best efforts to protect its own infrastructure, Alaska’s coastal plain is thawing—due partly to hydrological changes caused by development and partly to warmer air from climate change. As the permafrost layer descends deeper below the surface, the land changes into what’s known as thermokarst: It grows uneven and warped, and riddled with tunnels as subsurface ice structures melt. At Prudhoe Bay, at least 900 acres of thermokarst have developed since drilling began. 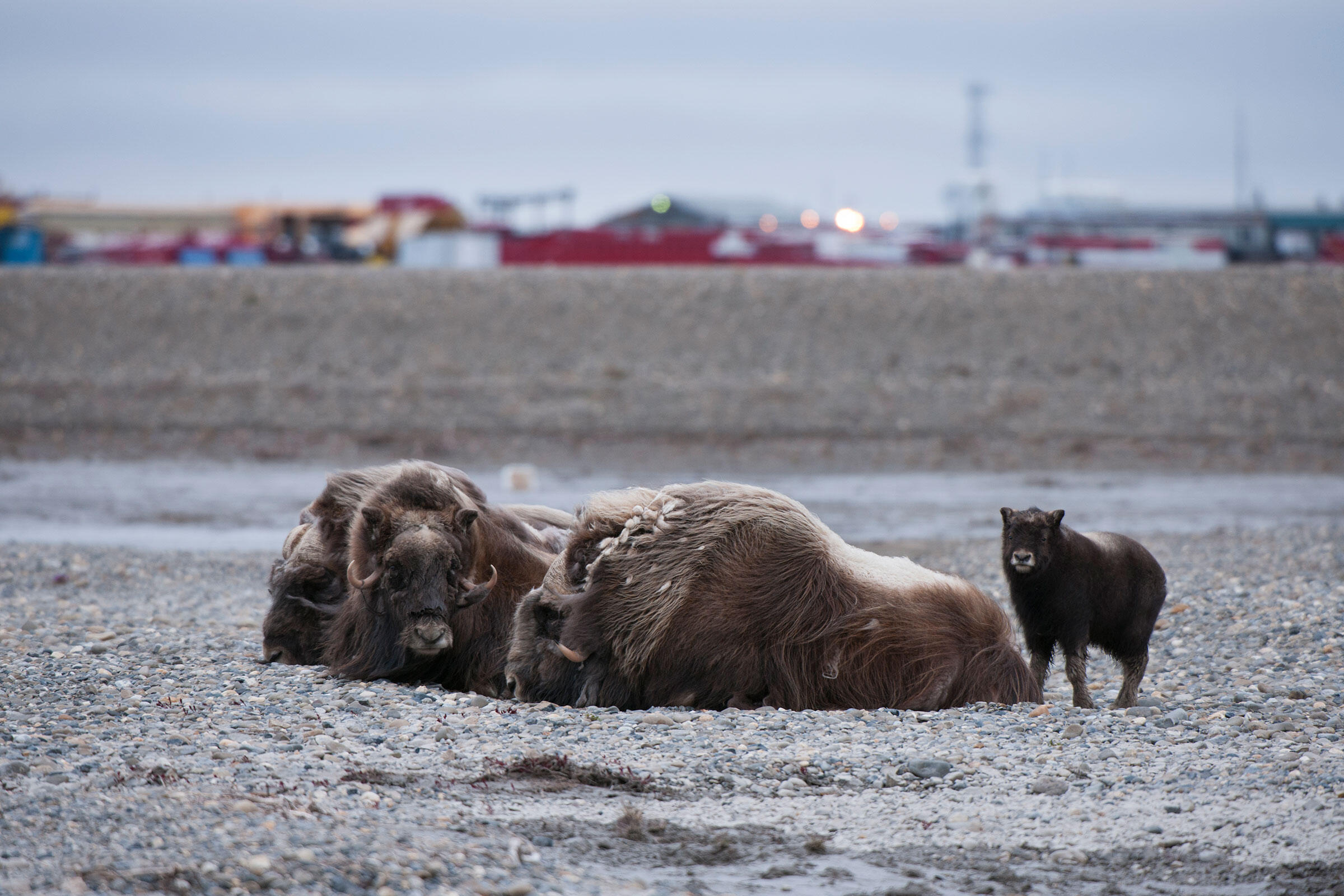 A group of musk oxen rest at the edge of the oil town of Deadhorse at Prudhoe Bay. Oilfields displace large mammals, and at the same time attract predators like arctic and red fox that impact bird populations. Photo: Florian Schulz

The Arctic Refuge’s coastal plain is already short on space; it’s much narrower than Prudhoe Bay, so has less area where animals can spread out. Birds tend to congregate around surface ponds, which are only able to hold water because of permafrost. The frozen ground prevents water from percolating deeper beneath the surface; as permafrost retreats and thermokarst develops, its possible those ponds will disappear as well. “I’ve seen this at Denali National Park, where there are ponds that 30, 40 years ago were seemingly brimful of water and now they’re not,” Senner says. “The suspicion is that there used to be ice under there, and now it’s lower, and it just can’t hold the water it once held.” And so along with fragmenting the landscape, infrastructure threatens these water sources so important for nesting birds.

And so, as the Arctic Refuge’s fate once again hangs in the balance, the lesson from Prudhoe Bay is clear: Even the most judicious attempts to drill for oil without disturbing the landscape are not sufficient. Drilling requires intensive infrastructure, and wherever there’s infrastructure, wildlife will be disturbed and the landscape will forever be damaged.