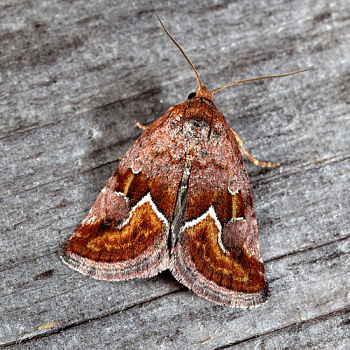 Male moths fly miles to find love. They don’t know what the female sounds like, or even what she looks like. But when they smell her, boy, do they know it, and they use her seductive musk to track her down.

The tracking isn’t easy: Even after getting a whiff of a virgin female, the male still has to figure out in what direction she lies. And he can’t lose heart when the wind blows the scent away abruptly, leaving him fluttering around aimlessly (video). Oh, and he has to beat out all the other males who are also racing to claim her. The female usually mates with the male that crosses the finish line first, after which she stops spraying the alluring perfume. No prize for second place.

So to find the female, a male moth must first stumble upon her scent, and it's best if he has some type of strategy for doing so. How to go about it? Fly upwind? Downwind? Cut across the wind? Stay in one spot until the odor comes to him? The best way is to fly across the wind reported researchers from the University of California, Riverside and the University of Southampton, UK who recently published their work online in The Journal of Animal Ecology.

The scientists studied the bog moth in the Big Heath Bog of Acadia National Park, Southwest Harbor, Maine. The moth is orange and it flies around during the day, unlike the moths we commonly see flocking to lights during the night. The female moth sits on a plant and “calls” her suitors by sticking out her abdomen and then releasing smelly pheromones, chemical signals that the male gets when they land on his furry antennae. The pheromones are distributed in a gradient around the female, which means that as the male gets closer to her, his antennae encounter more pheromones more often. They tell him he’s “getting hotter.”

To find out how the male moths were going about finding the signals, the scientists looked at 53 flights during which they also measured the direction and speed of the wind. Previously, some scientists thought that it would be best for the moths to fly with the wind because that way they weren’t wasting energy fighting the wind when they didn’t even know where a potential mate was.

But what male moth cares about energy conservation when sex is on the line? The moths in this study did not show preference for downwind travel, nor upwind travel, which may make searching easier if the direction of the wind changes frequently. While the males did travel in all directions – flying in both straight lines and making turns here and there – the most utilized detection method was flying across the wind. The males need to cover as much area as possible in search for the elusive and ephemeral scent and they won’t let the wind dictate where they search, thank you very much.

Also: Some spiders send out pheromones that are identical to those of the female moths. After his long and stressful tracking, the male moth finds a spider instead of reproductive success. How tragic.