I did not hurry to make photocopies of the original letters Peter Edge gave me when I got the suitcase and its contents back home to Evergreen, Colorado. I would have had to open each piece of stationary and lay it flat at the risk of breaking the little spines that had been folded into the papers for about a century or more. It did not seem like a good idea to submit 19th century letters written with pen and ink in that elegant though occasionally indecipherable Spencerian script, to the 20th century brutality of a copy machine’s pressure and hot bright light. 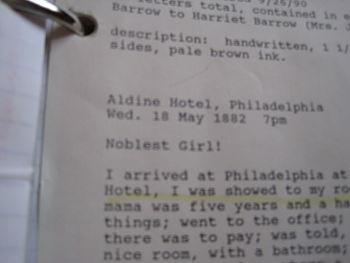 A page from my notebook of Rosalie's letters.
So, despite the practically religious experience of handling a letter written to four-year old Miss Mabel Rosalie Barrow--from her ‘Most Affectionate Papa’ and dated ‘Wed. 18 May 1882 7 pm,’-- I decided to touch all the letters as little as possible. Properly archived they would have been sheathed and guarded from the cumulative affects of contact with humans--or a rogue environment. This point brought to mind the Yellowstone National Park blaze of a few years earlier.  Ash and smoke from the Yellowstone fire had drifted 500 miles into Evergreen. The drought-stricken ponderosa and lodge pole pine expanses of the Arapahoe National Forest I saw from my windows were about the same age as Yellowstone’s, and I had already switched into worry-mode about how to decamp from our indefensible mountain property with kids, husband, two dogs, a cat and our family's cherished  mementos.

Now
Rosalie’s suitcase of letters and a few of her cheished  mementos--like her 1917 “Votes For Women” suffrage banners she had kept--were added to my list of perishables that must be saved. It was at about that time that Rosalie became my oldest youngest child, irreplaceable and deserving of extreme care.  The best I could do for her was to keep only one large manila envelope of letters at a time, type out each letter, and rotate the packets between my home office and a safe deposit box at the closest bank. 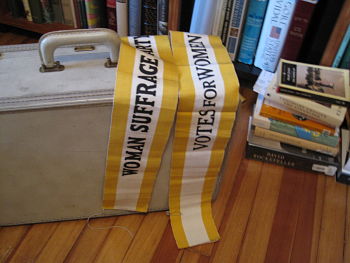 Relics from Rosalie Edge's suffrage days.  Used with permission of Dr. Deborah Edge
The typing took a while, like everything else associated with this biography. My method was to open a letter in the order I found it, skim its contents, type it verbatim in Multimate-green on the black screen of my first personal computer, print out the typed page and put it in a three-ring binder, then fold the original letter back into the stamped and postmarked envelope it had come out of. I could only type a few letters at a time before my concentration wandered back to freelance assignments that had a deadline and dollar sign attached to them. Weeks—months—passed between transcriptions.   Meanwhile a much more practical concern than wildfire was that some very old people who had known Edge personally might die if I copied all the letters before I got around to speaking with them.
Next: Reaching out to Rosalie’s friends and foes.