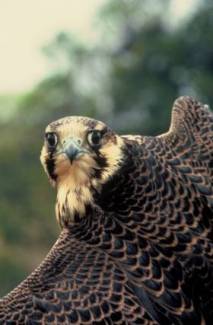 As if we didn’t already have our hands full in Afghanistan, now migratory birds have been added to the list of the military’s woes.  Between January and November this year 125 birds have struck aircrafts flying in and out of the air force base in Bagram, reports the Washington Post. The Air Force has responded by literally taking a contract out on the birds’ heads.

The bid request is for “bird control services” generally, but the preferred method to rid the base of those pesky “small songbirds, pigeons, Magpies, Hawks and Black Kites” is one of the oldest tricks in the book. They are seeking trained falcons – and their masters.

As military activity in Afghanistan has ramped up in the last year, the number of bird strikes has increased at the country’s busiest airfield. Bird watch conditions at the base are rated low, moderate, and severe. Moderate conditions require “caution” from aircrews, preclude formation takeoffs and landings, and restrict low landing approaches. “Severe” bird activity occurs 15 percent of the time and requires commander approval before all takeoffs and landings.

The fall and spring migrations pose the worst problems. The winning bidder will be required to collect avian remains after birds strikes so that the Feather Identification Laboratory at the Smithsonian Institution can compile the data, in an effort by the federal government to understand and reduce bird hazards at airfields.

The extra vigilance isn’t all due to concern for the birds – a feathered mess in a plane’s jet engine can interrupt a mission. The Post article reports that bird strikes cost the Air Force $35 million annually.  So far, the military has used loud rockets and shotguns to deter the birds without much success.