On any given day, the largest gathering of birds I’m likely to see is a few dozen pigeons darting among the Manhattan rooftops outside the seventh-floor window by my desk. So last month I jumped at the chance to view 400,000 Sandhill Cranes stopping mid-migration to rest and refuel along Nebraska’s Platte River. What’s more, I’d get to spend one night in a blind at Audubon’s Rowe Sanctuary, surrounded by the magnificent birds. I was ecstatic. Then I read the informational guide.

I’d be dropped off at 5 p.m., it said, and I wouldn’t be allowed to leave the six-by-eight-foot wooden blind until someone collected me at 9 a.m. the following day. The structure has no insulation, and no heating apparatus is allowed—lest the shack catch fire and the blaze startle the birds. Human comfort wasn’t entirely dismissed: Temperatures often dip below freezing this time of year, the guide said, so I should bring a sleeping bag rated for -10°F to stave off hypothermia. And there’d be a Porta-Potty—a detail I found reassuring but also somewhat confusing, given the no-leaving-the-blind rule.

People do this every March and April, I reassured myself. So what if my outdoor experience thus far has consisted of short day hikes and that one overnight trip in central New Jersey in middle school when I was surrounded by teachers and classmates? I couldn’t pass up being smack-dab in the middle of one of the greatest migrations on Earth.

So in mid-March I showed up at Rowe with my photography equipment, the Mountain Hardwear HyperLamina Torch 0°F sleeping bag I was field-testing for Audubon, chemical hand and body warmers, and a day’s worth of snacks. A volunteer bundled me and my gear onto an ATV and drove out to the blind—an unadorned wooden box—set about 30 feet back from the river. Before he left, he handed me a bucket. “Thanks,” I said, “What is this?"

Right, I thought. Alone, I looked around, up and down the river. No birds were in sight, though I could hear them trilling as they flew overhead. I decided to settle in. I put the bucket in a corner, spread out my sleeping bag, set up my camera, and removed the slats covering the viewing openings.

The sounds of calling cranes slowly grew louder. I stared out the opening through my binoculars, my breath becoming visible as the temperature dropped, picking out groups of cranes flying in and landing upstream. Scores of birds dropped down in quick succession, making it clear why a flock is called a “siege.” Frustratingly, they seemed to be concentrating a few hundred feet from my blind.

Then a loud, rattling call startled me. I put down my binoculars and saw birds setting down about 50 feet from me. They were so close I didn’t need the glass. The four-foot-tall, crimson-capped cranes came in for awkward landings, legs flailing. They crowded together, some pecking at each other and jockeying for position, while others launched into exuberant dancing. The enormous creatures dance throughout the year, I recalled, but especially during mating season. One bird in particular seemed laser-focused on its performance­—bowing, displaying its six-foot wingspan, and leaping gracefully into the air; I waited, in vain, for its partner to appear. As some 15,000 cranes gathered along this stretch of the Platte, the soft trilling that I’d heard earlier had turned into a cacophonous trumpeting, what the Audubon Field Guide describes as a “rattling kar-r-r-r- o-o-o.”

By 8 p.m., the birds were still honking, purring, and hissing away, but I could just barely pick out their ghost-like forms in the dark. Suddenly hungry and cold, I scarfed down my dinner of strawberry Pop Tarts, made use of the “facilities,” and zipped myself into my sleeping bag. Eventually I fell asleep, waking whenever something riled the cranes, as happened throughout the night.

<<You can help! Audubon's work makes a difference. Support conservation efforts like those at Rowe Sanctuary and elsewhere across the country by donating today!>>

I jolted awake at 6 a.m. and hurriedly opened the slat, half-afraid I’d missed the birds’ departure. Several dozen were clustered just 30 feet away, their calls picking up in volume as birds up and down the river joined in.

Nine o’clock came and went and they still hadn’t budged. I started to wonder how long they’d stick around. An hour later, at some invisible signal, the 15,000 birds around me seemed to lift into the sky at once. Their honks and trills were almost deafening as they circled overhead, joining the hundreds of thousands already on the wing. Smaller flocks slowly broke off from the massive swirl, revealing more and more sky.

Outside I heard the roar of the ATV and opened the door to find the same volunteer who’d dropped me off the day before. “You survived!” he said cheerfully. Yes, I thought: In a wooden shed, in frigid temperatures, with a sleeping bag, pee bucket, and 15,000 cranes for company. It was an epic slumber party. As I left the blind for the first time in 17 hours, I looked around, astonished that minutes before the area had been packed with birds. The cranes were all but gone from the river basin, the only evidence they’d even been there the soft trilling in the distance. 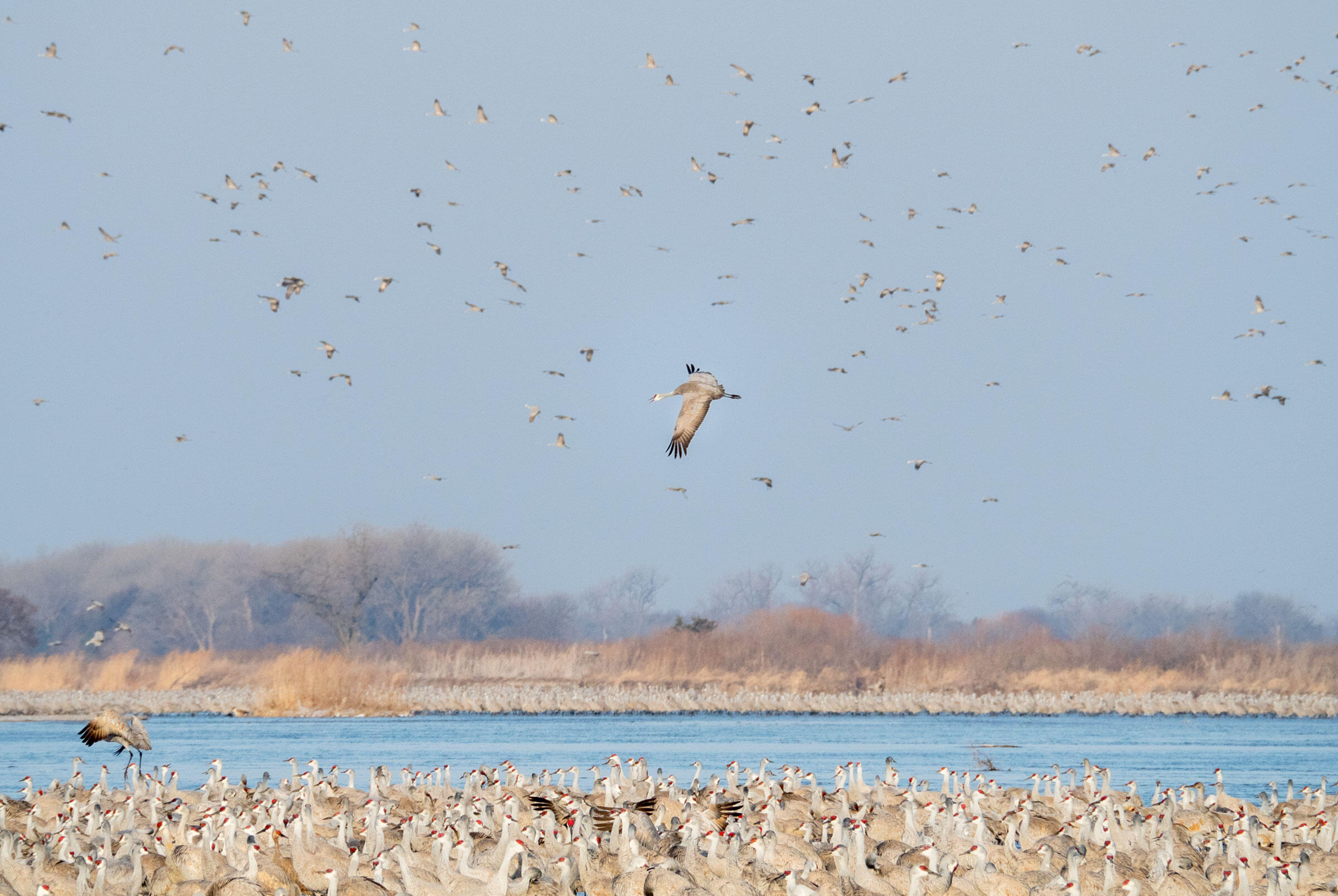 Crowded together, the cranes mill about in the morning, some squabbling over positions with others spontaneously showing off their elaborate dance moves. Photo: Preeti Desai/Audubon

Michael Forsberg’s photo of a flock sweeping over Nebraska's Platte River beat out tens of thousands of other candidates vying for the honor.