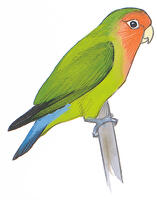 What does a hot bird in a big city have to do to stay cool? They can’t turn on the air conditioning—but they can take advantage of ours. Rosy-faced Lovebirds in Phoenix, Arizona, flock to air conditioning vents in greater numbers as temperatures rise, according to a study published this week in Biology Letters. The birds’ inventive adaptation to Phoenix’s extreme summers is the latest example of how birds and wildlife change their behavior to stay cool in the heat, and will likely become more necessary as climate change makes an already hot region even hotter.

Rosy-faced Lovebirds are pet trade escapees native to southwestern Africa that were first documented in Phoenix in the 1980s. They’ve flourished in the city, where they nest in cavities in ornamental palm trees and native cacti, and their population is now estimated at more than 2,000 individuals. But the parrots haven’t ventured far outside the city’s urban center, suggesting that they rely on humans to survive in a desert that’s hotter and drier than their home turf. In the arid woodlands and scrublands of their native range, temperatures rarely exceed 100 degrees Fahrenheit and the birds can stay cool and hydrated by visiting surface water sources. In Arizona’s Sonoran Desert, on the other hand, temperatures regularly exceed 100 degrees and water sources like springs or streams are scarce.

Phoenix temperatures are even more intense than the surrounding area thanks to the urban heat island effect, and the city’s climate has changed even in the few decades since the lovebirds first arrived. Already the hottest city in North America, Phoenix is also the second fastest-warming city in the country; compared to 1970, the city now experiences an extra 6.2 days above 110 degrees on average, according to Climate Central. Local wildlife are feeling the heat. The rising temperatures and aridity have driven the nearby Mojave Desert’s bird communities to collapse—a microcosm of larger changes taking place across the Southwest that affect people, too. In 2019, Maricopa County, which includes Phoenix and its suburbs, experienced 103 days of triple-digit temperatures, and the heat killed 197 people. Conditions are projected to become even more extreme in the not-too-distant future: Scientists predict that Phoenix will have 132 days per year with temperatures over 100 degrees by 2060.

Phoenix’s lovebirds have figured out a creative way to beat the desert heat. Since they arrived in the city, Arizona State University’s science building has become a reliable place to see them. During the summer, the colorful birds perch near the building’s air conditioning vents, apparently taking advantage of the cool air leaking out—but no one had ever formally studied the behavior.

“Several generations of graduate students of mine independently commented on the lovebirds,” says Kevin McGraw, who runs a behavioral ecology lab at the university. “I said enough is enough.” He decided to formally document the observations in a scientific study.

McGraw found the perfect student to take on the study in undergraduate and self-described “parrot person” Raegan Mills. “I’d say that my love for lovebirds really motivated me to join the study,” Mills says. “I was interested in their behavior as a feral population in an urbanized area.”

To better understand why the lovebirds were cozying up to the campus building’s air conditioning vents, Mills and McGraw enlisted the help of a handful of students unfamiliar with their working hypothesis. For one year, from August 2, 2018 to August 2, 2019, students counted the birds on a randomly selected morning, afternoon, and evening each week. They noted various conditions that might influence the birds’ behavior, like temperature, humidity, cloud cover, and human foot traffic.

In the end, they made 537 total observations. Most of the time they didn’t see any lovebirds on the vents, but 9 percent of the time they saw at least one. The lovebirds appeared only when the local temperature topped 90 degrees (except for two instances, in which just a single lovebird was counted). The birds were most plentiful on the hottest days, with the number of birds near vents increasing exponentially once temperature rose above 99 degrees. One day when temperatures neared 115 degrees, the students counted 43 lovebirds. When they crunched the numbers, Mills and McGraw found that temperature was indeed the biggest factor influencing whether the lovebirds showed up, although humidity played a role as well.

It makes sense that the birds would seek out the cooler air coming out of the vents on especially hot days when they are likely reaching the limits of heat tolerance, says Blair Wolf, a researcher with the University of New Mexico who studies the impact of climate change on birds in the Southwest. Birds pant to stay cool—a strategy that uses a lot of energy and a lot of water. Because they’re small and so much of their body is in contact with the outside air relative to their total size, birds dehydrate quickly. “Birds have to be highly tuned to the environment around them because they have to balance their water and energy budgets on a daily basis,” Wolf says.

That means the energy saved by even a few degrees’ difference can keep birds below their maximum heat limit and provide some much-needed relief. It’s an example of what scientists call “microsite selection,” when animals find a spot cooler than the surrounding habitat and hunker down when it’s too hot to forage for food and water. Microsites are often found near water and shade-providing plants, but the lovebirds seem to have found an ideal microsite in ASU’s air conditioning vents, Wolf says. Since their native habitat doesn't ever get as hot and dry as the Sonoran, they are probably extra-dependent on human-provided resources to meet their microsite and water needs. They aren’t necessarily going to know how to get water out of a saguaro cactus fruit, he says, like a native species might.

Their reliance on humans will probably minimize direct competition for resources between the lovebirds and native wildlife, says Simon Kiacz, an avian ecologist who studies parrot populations in Texas. If the lovebirds were able to extract water from a saguaro cactus fruit, they’d potentially be depriving native wildlife of the resources. “I think native species will have the upper hand in most cases involving the parrots,” he says. “There may be some competition for nesting cavities, but it's likely not significant since the parrots are restricted to urban areas while the native species are not.”

But the habits of both native and non-native species could change as conditions get more extreme. Drought and high temperatures will put increasing pressure on all wildlife, so it’s important to understand how they are adapting—or failing to adapt—to increasingly extreme conditions. The study provides a critical reminder of how species are being pushed to adopt new behaviors as humans alter the planet.