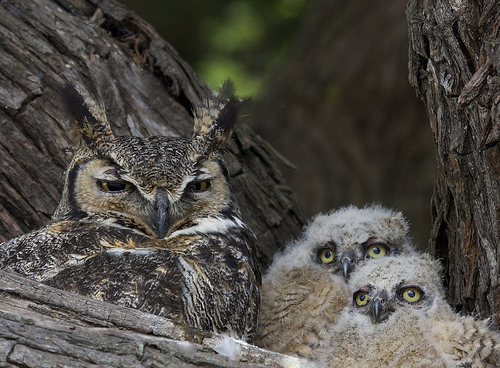 Early each year, when snow still covers the ground and most migratory birds haven’t yet begun their journey north, great horned owls are already starting to nest around the country.

In these frigid winter months males hoot for females—hoo-hoo hoooooo hoo-hoo—swelling their white bibs and bowing around any ladies they attract. If the male catches her fancy, they seal the deal by both bowing and hooting at each other; the birds will remain mates for years or even the rest of their lives.

These remarkable birds will nest just about anywhere. Their nesting habitat is the most diverse out of any bird in the country, ranging from desert to grassland, forest to suburban areas. They’ll also nest on virtually any surface—abandoned buildings, other bird’s previously constructed nests, manmade structures, trees, and even on the ground. The one-to-four eggs they lay incubate for about a month, and the chicks fledge 45-49 days after hatching.

To keep the family fed, the powerful birds—they weigh up to five pounds and their wingspan is nearly five feet—prey on a wide variety of creatures, including those that other birds may shy away from, like stinging scorpions, smelly skunks, and even large birds, such as herons (check out the video below of an owl going after a great blue heron on its nest!). Primarily nocturnal perch hunters, their strong talons and hooked beaks allow them to pounce and tear prey.

While great horned owl populations are healthy, their voracious appetites can pose risks to the conservation of other avian species. In the 1970s, for example, great horned owls dined on young peregrine falcons and, as a result, were primarily responsible for wiping out half of the species’ population in the eastern United States. This was a devastation and setback to the peregrine falcons, a species recovering from near-extinction due to the effects of DDT. To give peregrines a better chance, biologist reintroduced them outside great horned owls’ territory. Some species, however, have learned to fight back. Crows, a common meal for great horned owls, will gather in large flocks and travel great distances to mob the predators and yell at them for hours at a time.

Now, at the onset of their nesting season, is the best time to get out and look for great horned owls. While the elusive birds can prove difficult to spot for even experienced birders, the chances of espying them now is heightened with the absence of leaves on trees. Their nests are exposed and an ear tuft popping out of a nest will often give the nest location away. Dusk is also a great time to spot great horned owls, as they tend to fly over roads and fields, and their big heads and broad winged silhouettes make them easy to identify.

It’s important to keep a respectable distance when viewing any bird, but it’s particularly important to stay back when watching great horned owls—they’ll fly at any intruder and possibly strike them.

TAKE PART: Be sure to contact your local Audubon chapter to sign up for an evening owl prowl.