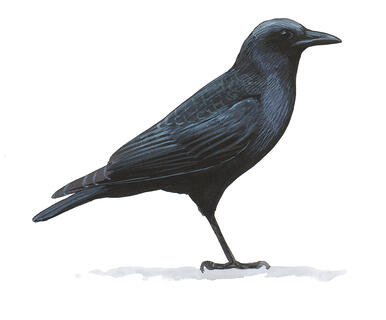 Crows stream by overhead in the late afternoon—rivers of crows. These are American Crows with a purpose.
They’re headed to their night roost, a giant avian slumber party.

Gathering in a park or woodland, they land in a tree, then scuffle and shuffle and squawk, filtering down through the branches. Birds arriving late force the early birds lower into the trees. Crow expert Bil Gilbert believed that the roost provides warmth, protection from predators, knowledge about food sources, and a chance to locate a mate.

Immature crows may spend the night in the roost year round, but adults of breeding age generally use the roost only during the non-breeding seasons.

And just how many crows are there in a roost? All depends, but one long-time roost in Danville, Illinois, boasts nearly 100,000 birds. Not that the folks of Danville are especially happy about that. Imagine the ruckus when the first few thousand crows leave in the morning, about an hour before sunrise.

Follow crows to their roost some autumn evening, if you can, and watch these avian acrobats wheel in. Hitchcock’s movie The Birds might come to mind. And if you go, a word of warning: You’d better take an umbrella.