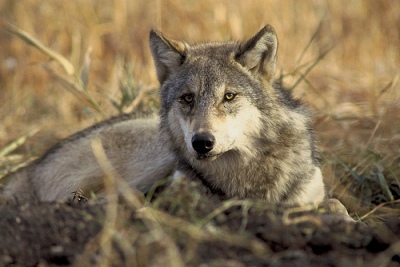 The gray wolf, Canis lupus, is one of the most controversial species in the United States. Photo credit: John and Karen Hollingsworth; US Fish & Wildlife Service / CC BY 2.0

Update: On August 31 the U.S. Fish and Wildlife Service announced that the final delisting rule for Wyoming gray wolves is approved. The state’s wolves are considered officially recovered under the Endangered Species Act and will no longer receive protection. The state will officially take over wolf management on September 30. Wolf hunting within the designated Trophy Area will begin the next day, and the state has approved a seasonal harvest of 52 wolves.

The estimated 330 wolves roaming northwestern Wyoming could lose their protection as an Endangered Species. The Department of the Interior is currently reviewing the final delisting rule, says Diane Katzenberger, a spokesman for the U.S. Fish and Wildlife Service. If approved, the long-anticipated rule will end protections for wolves and enable annual wolf hunting.

The FWS first proposed delisting Wyoming wolves last October. Following delisting, the state will take over management of the wolf population, guided by a management plan they developed. The plan requires that Wyoming maintain a minimum of 10 breeding pairs and a minimum of 100 individuals outside of Yellowstone National Park and the Wind River Indian Reservation.

Until recently, wolves in Wyoming, Montana, Idaho, and parts of Washington and Oregon were part of the Rocky Mountain “nonessential experimental population,” a FWS term used to designate a geographically isolated region where experimental reintroductions are taking place. Animals in these areas have partial protection under the Endangered Species Act.

That changed in May 2011, when all Rocky Mountain wolves were delisted except those in Wyoming. A similar delisting occurred in December 2011 in the Western Great Lakes population area, which includes Minnesota, Michigan, Wisconsin, and parts of the Dakotas, Iowa, and Illinois.

Wyoming’s management plan allows wolves to be killed on site in all parts of the state except Yellowstone, the reservation, and the land between them. This narrow strip of land will be designated a “Trophy Game Management Area,” where wolf hunting will be regulated with yearly quotas. Elsewhere in the state wolves will be considered a predatory animal and can be killed without a permit at any time. The majority of Wyoming’s wolves live in the northwestern corner of the state, and the unregulated hunting outside of the management area will likely curtail their spread.

An estimated 1,650 wolves roam the Rocky Mountain region, unaware of the controversy that their presence fuels. The western ranching community, fearing profit loss from wolf depredation, supports wolf hunting and shoot-on-site policies. But many environmental advocacy groups argue that western wolf populations are not yet sufficiently recovered to handle yearly hunts.

Wyoming is not the only western state proposing a change in existing wolf regulations. Last week Montana’s Fish, Wildlife, and Parks division (FWP) released a draft proposal that would allow Wildlife Services to kill problem wolves without permission from the state.