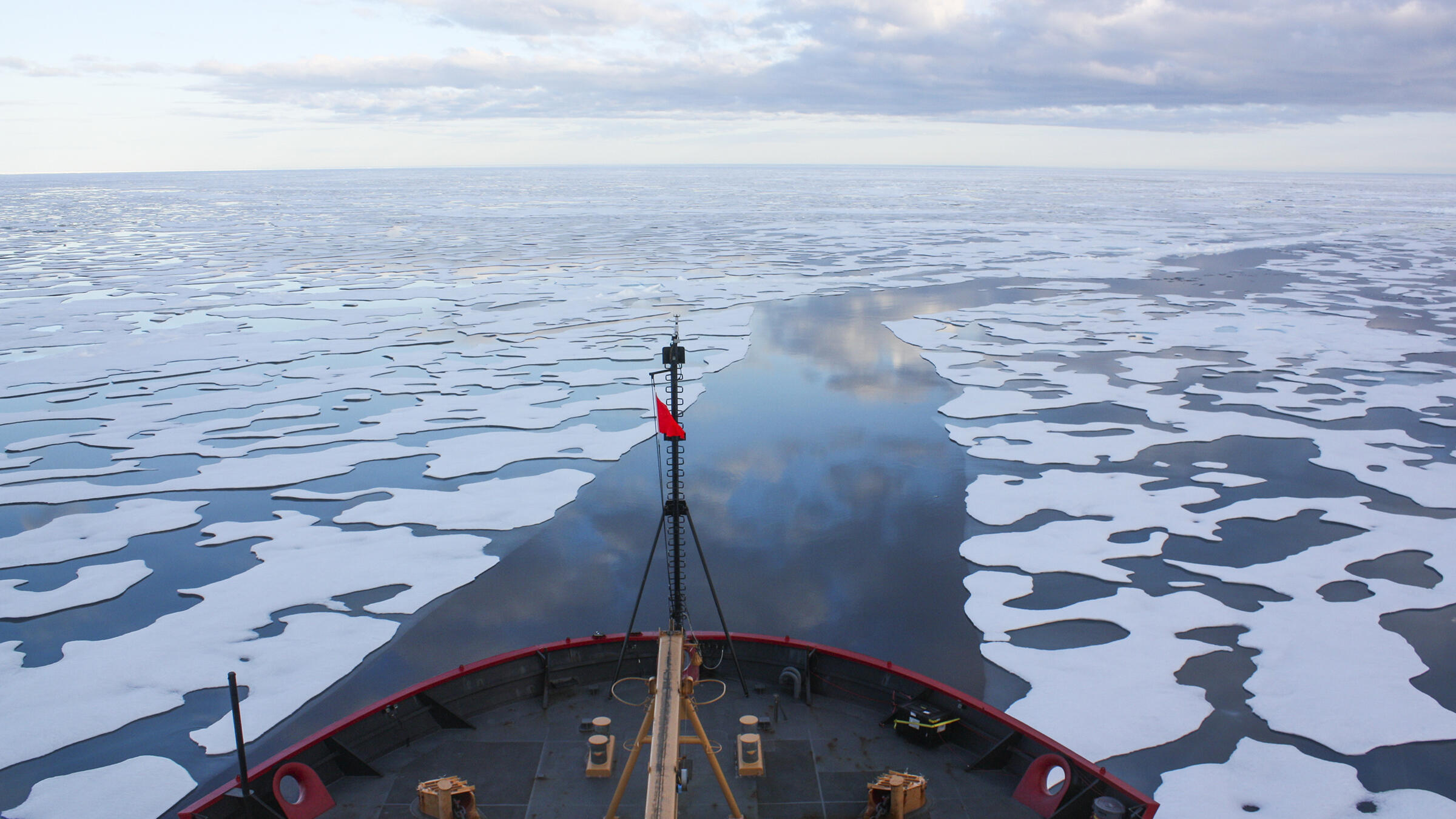 The Arctic Ocean: A Future in Peril

The Arctic Ocean: A Future in Peril

The Arctic Ocean is one of the most spectacular places on earth for wildlife, but there is much we have yet to learn about this vast ecosystem. Although the weather is harsh in the winter, with gale-force winds, 20-foot seas, and shifting sea ice, these waters provide unspoiled habitat for millions of migratory birds and thousands of marine mammals, including polar bears, ice seals, endangered bowhead whales, and Pacific walrus.

We are still learning about the intricate interactions between wildlife and the ocean in these remote waters. With so much still unknown, it is difficult to fully assess the risks involved in drilling offshore for oil and gas.

The Chukchi Sea, off the coast of northwest Alaska, is one of the most productive ocean ecosystems in the world. Its vast, shallow sea floor and seasonal ice cover provide nutrients and pristine habitat for a multitude of organisms, ranging from walruses to ice seals to whales to millions of seabirds to the top predator mammal, the polar bear.

The bays, inlets, and river outlets lining the Chukchi provide breeding, feeding, and staging areas for millions of shorebirds, seabirds, and waterfowl. At least 15 species on the Audubon Alaska WatchList use the Chukchi, including Spectacled Eiders, which are listed as threatened under the Endangered Species Act (ESA), and Yellow-billed Loons.

A dozen globally and continentally significant Important Bird Areas (IBAs) sit within the Chukchi Sea and coast. Ledyard Bay, an IBA just south of proposed oil and gas leases, is critical habitat for threatened Spectacled Eiders. About 33,000 Spectacled Eiders, as well as 500,000 King Eiders, feed on mollusks and other bottom food in the shallow waters of the bay. Nearly all of the breeding King Eiders migrate through and forage in this region prior to dispersing to breeding grounds in Canada and Russia and on Alaska's North Slope.

Small populations of Kittlitz's Murrelets also live in the Chukchi Sea. Nests have been found inland in the DeLong Mountains and murrelets have been found up to 40-50 miles offshore. Kittlitz's Murrelets have undergone dramatic reductions in population in recent years. The US Fish and Wildlife Service decided not to list the Kittlitz’s Murrelet under the ESA, but it remains to be seen how changes in climate will affect this species.

The Chukchi Sea is home to roughly half of America's polar bears—approximately 2,000 animals, or one-tenth of the world's population. Endangered fin and humpback whales, and the formerly-endangered gray whales, feed in the Chukchi's shallows. Up to 3,500 beluga whales use Kasegaluk Lagoon near Point Lay for feeding, calving, and molting. In addition, most of the western Arctic Ocean's endangered bowhead whales, the most important subsistence and cultural resource of many Alaska Native North Slope residents, migrate along the Chukchi coast.

The Beaufort Sea, part of the Arctic Ocean off Alaska's northern coast east of Point Barrow, is a rich marine environment that supports many migratory shorebirds, seabirds, and marine mammals. Bird species from the Alaska WatchList that rely on this area include Yellow-billed and Red-throated Loons; Brant; and Common, Spectacled, and King Eiders. There are seven globally-significant Important Bird Areas along the coastal plain and offshore. Marine mammals that ply these waters include polar bears, bearded seals, ringed seals, spotted seals, Pacific walrus, bowhead, and beluga whales.

Many bird species that migrate to the North Slope for summer breeding migrate through the Chukchi Corridor, then around Point Barrow, or in reverse in the fall. This spring and fall migration and staging corridor is likely used by the entire breeding population of King Eiders in Western North America, which are an Audubon WatchList species due to depressed population numbers. Yellow-billed and Red-throated Loons migrate to and from wintering grounds in Russia through this corridor between May and October. A variety of shorebirds stop over along the northeast Chukchi coast in concentrated groups. At Peard Bay, upwards of 56,000 shorebirds, mostly Red Phalaropes, move through during the post-breeding season. At Elson Lagoon, as many as 418,000 post-breeding shorebirds stop during fall migration.

Mapping the importance of the Beaufort Sea

Audubon Alaska and our partners completed a detailed report mapping out the important wildlife areas of the Beaufort Sea and the hazards that oil and gas drilling would pose: 2014 Beaufort Sea Comments on Proposed Oil & Gas Lease Sale 242.

Oil and gas leasing in the Arctic Ocean

Despite its spectacular wildlife, the Chukchi Sea is under intense pressure from prospective oil and gas development interests, especially as the sea ice melts.

A Big Step Forward...
In January, there was good news for parts of the Chukchi and Beaufort Seas: President Obama permanently withdrew several areas from oil and gas leasing. The areas the Administration chose to withdraw are important for subsistence, and provide key habitat for birds and wildlife.  A number of other very important areas in the Arctic Ocean, however, remain open to drilling. The President’s action protects a portion of Audubon's recommended conservation area around Hanna Shoal, where sea ice lingers longer than in other places, providing important habitat for ringed, bearded, and ribbon seals and especially for walrus. Common and Steller's Eiders migrate through here, and this is one of the only documented areas in U.S. waters where Ivory Gulls congregate.

Sliding Backwards...
The following month, the Bureau of Ocean Energy Management (BOEM) released the disappointing revision to its 2008 impact assessment regarding drilling in nearly three million acres of the Chukchi and Beaufort Seas approximately 60 miles from the northwest coast of Alaska: The assessment acknowledges a 75% chance of a major oil spill, which:

Despite the potential for disaster, BOEM rushed through the process to approve the plan to allow Shell to start drilling.

Adjacent to the Chukchi Sea to the east, the Beaufort Sea is under similar development pressure, though courts have intervened. Shell Oil attempted exploratory drilling in the Beaufort close to the Arctic National Wildlife Refuge in 2012, but was plagued by a series of mishaps, including the grounding of the drill rig the Kulluk near Kodiak Island on New Year's Eve. Only one field in the near-shore outer continental shelf of the Beaufort Sea, off the coast of Prudhoe Bay, is currently producing oil, though the State of Alaska has held several lease sales in the state-owned waters of the Beaufort Sea within three miles of shore.

Balance in the Arctic: Audubon's Position

Although Audubon has not opposed oil and gas leasing and development in many areas of the Arctic, there are several places where natural habitats are so important, and where so little is known of this dynamic environment, that further development should not be allowed. The Chukchi and Beaufort Seas are two of those special places.

The chances of an oil spill in these fragile ecosystems are very real, and the technology for oil cleanup in remote, ice-choked waters does not exist. There is currently no way to adequately respond to oil spills in solid and broken ice conditions and a large spill could cause long-lasting and devastating sociocultural impacts, including contamination of food and water, erosion of community integrity and identity, and substantial impairment to subsistence due to animal loss or changes in migration routes and behavior. Mitigation measures to prevent adverse impacts on the Arctic Ocean environment and wildlife have not been adequately or realistically described.

Audubon’s position is that leasing in the Chukchi Sea should not be permitted until:

As part of Audubon’s effort to protect the Arctic Ocean, Audubon has engaged in an intensive effort with our conservation partners to identify and map the most important ecological and subsistence use areas in the Chukchi and Beaufort seas and highlight the need to protect them. Those findings, based on the best available science, can be found here.

What you can do: