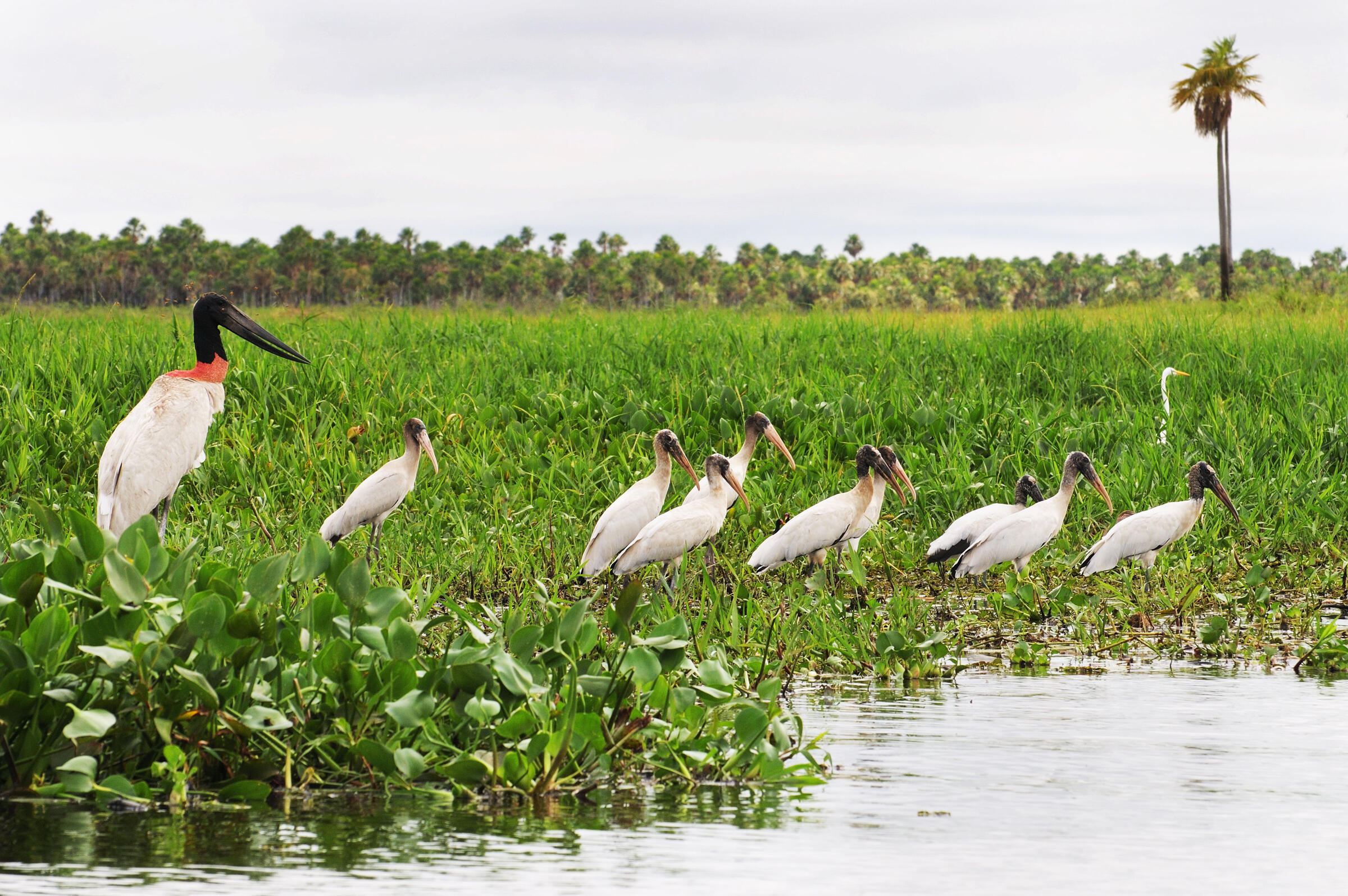 Birding and Ecotourism in Paraguay

One Jabiru (the big bird on the left) and the rest are Wood Storks. Photo: Emily Y. Horton

Birding and Ecotourism in Paraguay

Filled with grasslands, forests, and other biodiverse and threatened environments, Paraguay sits at the center of South America and hosts migratory species from the north (from Canada and the U.S.) as well as from the south (from southern South America and Antarctica). It is perhaps the most underbirded country in South America. Yet with a list of over 700 species, including some extremely hard-to-find birds, and the chance to see a wide assortment of mammals, it is surprising that Paraguay has flown under the radar for so long.

Here is a confluence of eco-regions: the Chaco forests in the west, the Atlantic Forest in the east, as well as influence of the Pantanal wetlands in the north, Cerrado savanna of Brazil, and Mesopotamia of Argentina. The separation of the Atlantic Forest from Amazonia by the swath of Chaco and Cerrado savanna, woodlands, and grasslands is important as it explains much about the evolutionary history of the birds in South America. The mix of habitats holds a large number of species, with some unique and memorable regional specialties.

Birders who choose to visit these areas in order to see and enjoy Paraguay’s natural riches will have a direct economic impact on the local people resulting in preservation of local habitats that maintain a healthy, viable ecotourism industry. In Paraguay, Audubon partnered with Guyra Paraguay to help spur and develop the bird tourism market within the country. To date, the project has trained over 50 locals to be bird guides, and hosted a dozen people into an apprenticeship program.

This is a wetland and grassland area east of Asunción, the major city and political center of the country on the Paraguay River. A highlight is the Strange-tailed Tyrant. Some other great birds of this area include the Crested Doradito, Yellow-rumped Marshbird, Maguari Stork, as well as herons, egrets, and ibises. It is a good area to find open country raptors, as well as the apple snail specialists—the Snail Kite and Limpkin.

This birding spot has gained international prominence in the last few years, as it is perhaps the best place in the world to see the endangered White-winged Nightjar. This habitat type, part of the Cerrado eco-region— a patchwork habitat of savannah, where grassland and woodland mingle—is otherwise restricted to Brazil and a tiny part of Bolivia and has many specialties. Cerrado specialties include the Curl-crested Jay, Black-throated Saltator and the Lesser Nothura, which is threatened and a near endemic to Brazil.

This reserve protects high-quality Atlantic Forest and is a desirable destination for birders visiting Paraguay. With over 400 species, the rich forest is pristine enough to provide habitat for Jaguar and Tapir, although rarely seen. Special birds of this area include Black-fronted Pipingguan, Helmeted Woodpecker and the spectacular-sounding Bare-throated Bellbird. Also here is the Saffron Toucanet, known as the ‘flying banana,’ as is its darker-plumaged relative the Spot-billed Toucanet. The drab but always interesting flycatchers are represented by some unusual ones, such as the rare Russet-winged Spadebill.

Although shared with all of its neighbors, the Chaco is most associated with Paraguay and covers a huge area in the western half of the country. With some luck and local knowledge, a visit to this area allows one to see nearly 200 species of birds. It is a hot and harsh environment in summer (October-March), yet much cooler in winter (June-August); the rainy season is October and November. In contrast to the drier western Chaco, which is a low forest of shrubs and trees, the eastern portion of the Chaco is moister and known as the Humid Chaco, where Palm Savanna is common. There are also open grasslands and ephemeral wetlands. This is an area that is fascinating for wildlife but is increasingly being converted to agriculture. Sustainable tourism could have a real impact in its conservation. 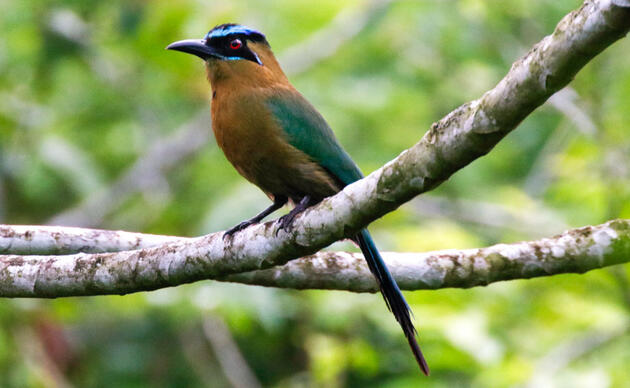 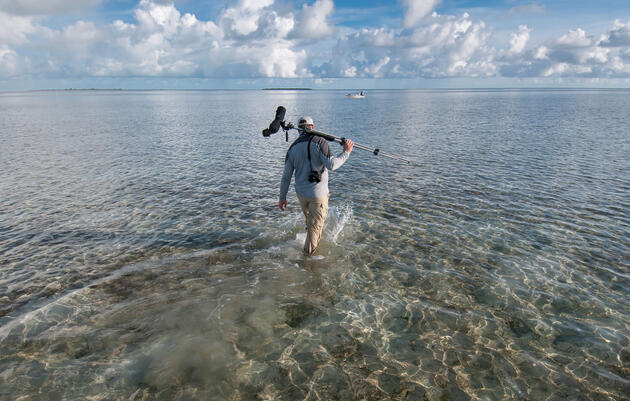 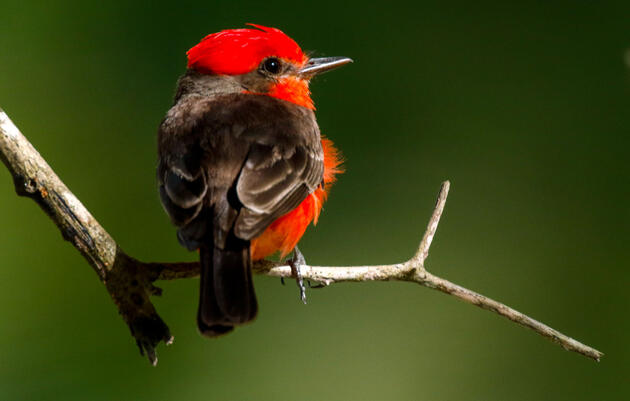 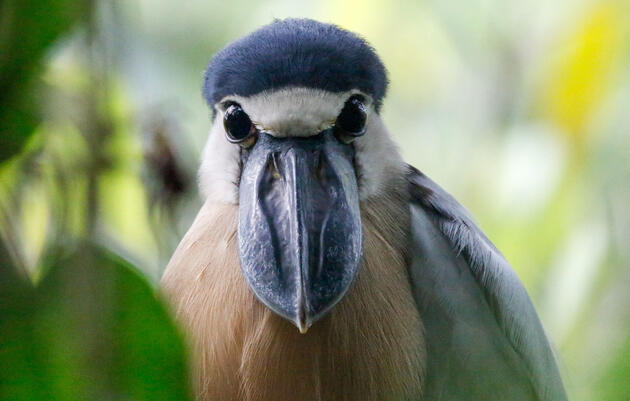