Anne-Gabriela Schmalstieg and Corinna Esterer aren’t your typical foster mothers. For starters, the youngsters they care for aren’t humans—they’re captive-bred Northern Bald Ibises, a species that went extinct in Central Europe more than three centuries ago. For six months each year the two 20-somethings dedicate their lives to the birds, living onsite in campers at the Schönbrunn Zoo in Vienna, Austria, and looking after the ibises from sunrise to sunset seven days a week. The entire first month the women must abstain from coffee, alcohol, and cigarettes because they have to spit in the birds’ food to make it easier to digest. The chicks eat as many as 15 times a day, dining on a mash of rat, mouse, and chicken, as well as fresh grasshoppers.

When the ibises aren’t eating or resting, the foster moms spend as much time as possible bonding with them. Cuddle time is key to ensuring such a strong connection that the birds will eventually follow the microlight aircraft carrying Schmalstieg and Esterer from Austria, over the Alps, and to overwintering grounds 800 miles away in Italy—a route their parents would typically teach them, and that they need travel only once in one direction to learn.

This is the third year that the women have worked on the decade-old international reintroduction project, and with each brood their voices are the only ones the birds hear. From day one, they call over and over: “Komm, komm, Waldies, komm, komm” (“Come, come, ibis, come, come”). When the chicks are three months old, their caretakers move them from the zoo to an aviary in Seekirchen, where they slowly become accustomed to a microlight aircraft and learn to follow it during training exercises, the women calling all the while.

Schmalstieg and Esterer are “quite essential for the project,” says project leader Johannes Fritz. “Never before have we had groups of birds with such a close bonding to the human foster parents.” 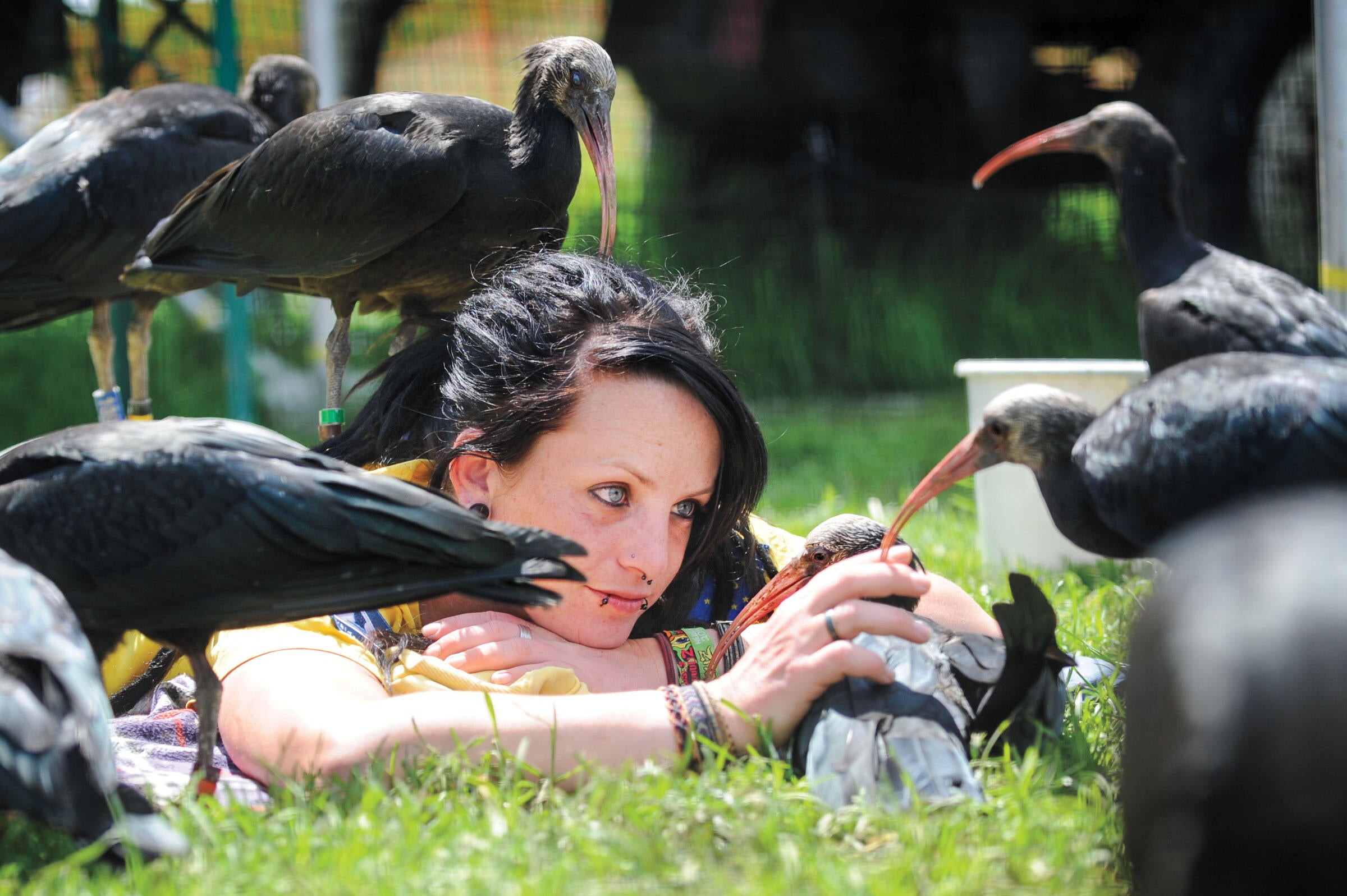 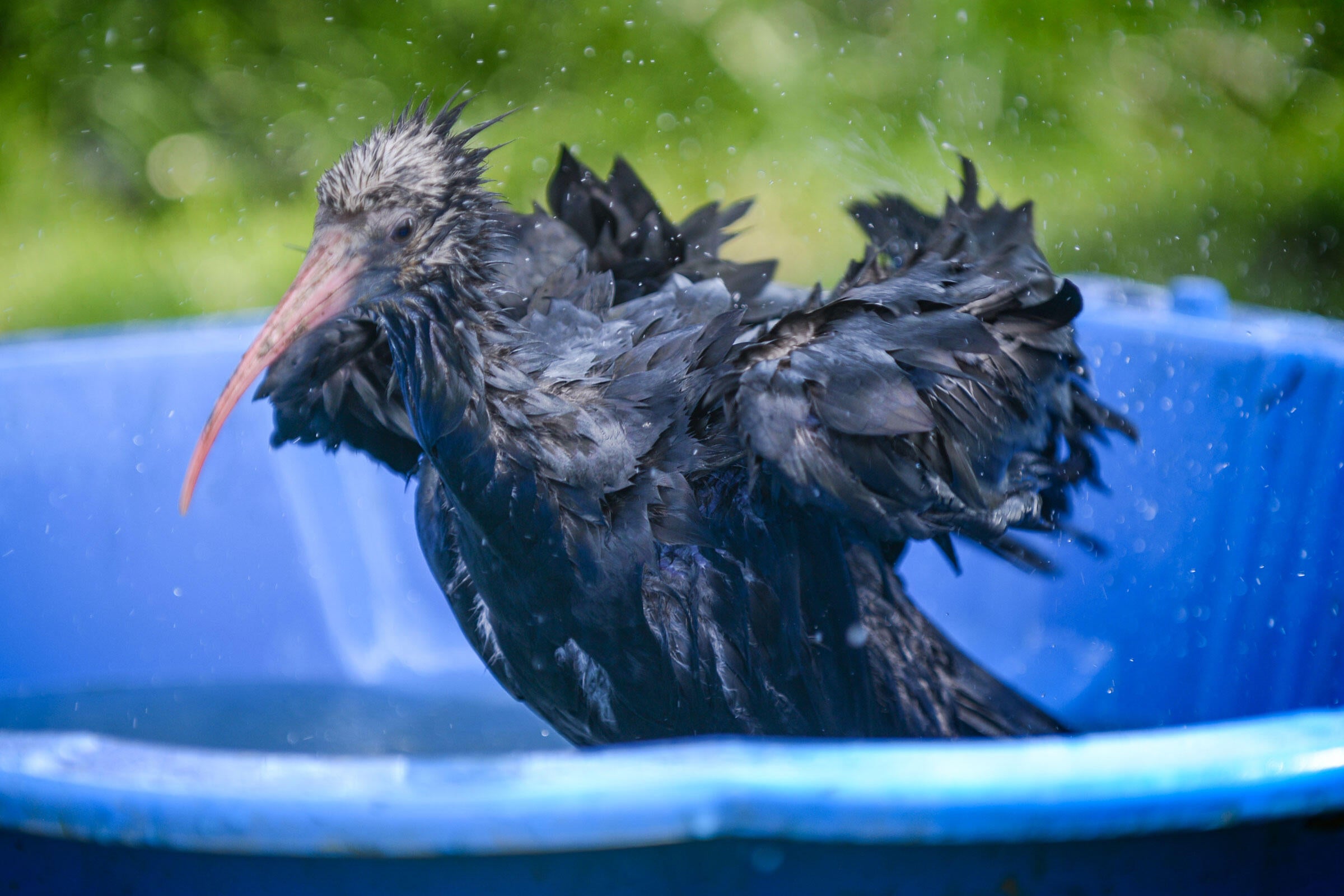 An ibis bathes on a warm, sunny afternoon at the aviary site in Seekirchen, Austria. Photo: Esther Horvath

By the end of August, the birds are ready to migrate. Today 80 wild ibises live in Central Europe, and the European LIFE+ reintroduction project is on track to meet its goal of 120 by 2019. The birds journey between the same breeding grounds their ancestors did centuries ago and a suitable overwintering site. Unlike back then, humans now watch them every flap of the way thanks to GPS tags attached to each bird. (To follow their annual trek, download the Animal Tracker app.) “For us it is very emotional,” Schmalstieg says. “The birds follow the aircraft because we are sitting in it.”

During the roughly 20-day trip, a crew travels on the ground, setting up stopover stations and tracking weather conditions. As Schmalstieg and Esterer have done with all 63 ibises they’ve raised, once they arrive in Tuscany, they will spend less and less time with the birds each day before leaving altogether after a couple of weeks, mimicking adult ibis behavior. In two or three years, when the youngsters reach breeding age, they’ll return north, retracing the path their surrogate parents taught them—and that they will one day show their own offspring.