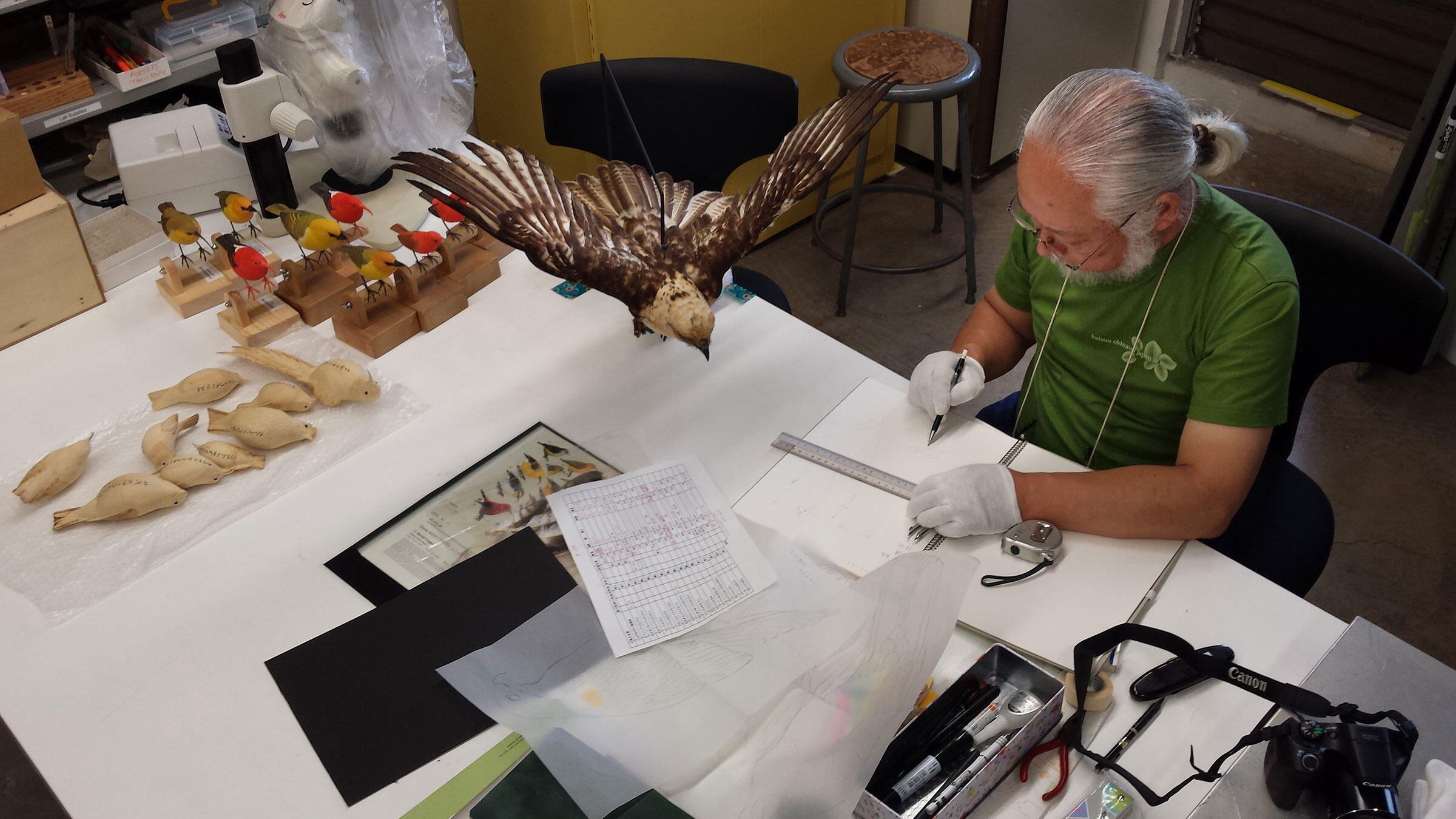 Haruo Uchiyama uses specimens from Hawaii's Bishop Museum to make intricate wood carvings of 40 of Hawaii’s 57 known honeycreeper species, including some extinct types. (The other 17 can only be found in fossilized form.) The sculptures will be used for educating the public and visually impaired birders. Photo: Molly Hagemann/Bernice Pauahi Bishop Museum

This Japanese Woodcarver Helps the Blind See Birds Through Touch

That's what spurred Haruo Uchiyama to create his unique “touch carvings.” The Japanese woodcarver, who learned the trade from his father, has devoted more than 35 years to sculpting life-size birds that are accurate down to the individual feather. “Blind people can hear the voices of crows and sparrows every day, but they don't understand how they look or their shape or size,” Uchiyama says through his wife and translator, Tomoko. Some of the models are equipped with sound recordings of the bird’s name and call, too.

Uchiyama's menagerie aids educators and conservationists alike. For one project, he created more than a dozen carvings of Galapagos finches to help teachers demonstrate evolution. He consulted with biologists to learn how the birds' traits were shaped over time, including the size and the shape of their beaks, and other adaptions they use to survive. For example, he found that Sharp-beaked Ground-Finches will push seabird eggs off ledges to break them against rocks. Uchiyama has also made puppets for scientists who hand-rear Whooping and Siberian Crane chicks in captive-breeding programs. The beaks are so carefully crafted that they can be used to pick up a pen. In addition, he's carved Short-tailed Albatross decoys to support nesting efforts on Midway Island in Hawaii.

Uchiyama's current venture has him carving male-female pairs of 40 Hawaiian honeycreeper species—which have evolved in a tremendous diversity of sizes, shapes, and colors—for Hawaii's Bishop Museum. Uchiyama has made five trips to Honolulu to pore over the museum's collection and deliver models. Every sculpture takes about a month; so far, he's completed 11 of the male birds.

From left: To carve an 'I'iwi, a declining species of honeycreeper in Hawaii, Uchiyama first sketches the shape onto a block of tupelo wood. Eventually, the wood will be used to create a mold, into which resin will be poured to make the final sculpture. The carver then uses acrylic paint to bring his resin sculpture to life. Photos: Haruo Uchiyama

Back in Uchiyama's workshop in Abiko, Japan, each honeycreeper starts as a perfectly textured block of tupelo wood, grown in the swamps of Louisiana, that the artist carefully whittles into the shape of the species. He then runs over the rough form with a grinder to etch the feather details and uses piano wire to reinforce their long, pointy beaks and delicate feet. Finally, he paints the model, applying about eight coats to make the surface feel more feathery.

The sculptures are delicate, but they're more durable than taxidermy. The feathers don't fade when put on display or deteriorate when handled by bare hands. For the most part, Uchiyama's honeycreepers will be kept behind glass at the Bishop Museum, where the carver hopes they can help people understand Hawaii's birds, as well as larger forces like evolution and conservation. But his creations will eventually serve as touch carvings when visually impaired visitors stop by. To birders, the models act as bridges to the unseen, Tomoko explains.  “I'm sure their world will be larger than before.”