When one grasps the full implications of climate change, there comes a measure of grief. I first recognized this in May 2014, when scientists studying the massive Thwaites Glacier in Antarctica reported that it had begun a process of “unstoppable” collapse. Something collapsed in me as well. Looking back, I can see it was the loss of the idea that our environmental mistakes could be undone before it was too late. And with that, society’s actual goal became clear: to do all we can to avert the most damaging outcomes.

How much can we do? The answer, I’m convinced, is quite a lot. And I have plenty of company in this conviction. Ask just about any climate scientist and you’re likely to get a straightforward answer: The faster we act, the less we suffer.

Not long ago I spoke with Zeke Hausfather, who studies future temperature scenarios at Berkeley Earth, a nonprofit climate think tank. Hausfather told me his computer models show that at the rate we’re going—that is, if all the countries that committed to the Paris climate accord were to cut carbon emissions by agreed-upon targets for 2030—we would likely end up with a world that is about 3.2 degrees Celsius warmer than preindustrial times by 2100. “In that case we will have hopefully avoided some of the truly frightening catastrophic outcomes,” he said, “even though a world of 3.2 degrees is not the one we want to live in, since it will have devastating impacts to a lot of ecosystems and human society.”

To limit planetary warming to 2 degrees—or, even better, to 1.5 degrees—would take far more effort. Countries would have to extend and intensify their commitments to reduce greenhouse gases, Hausfather said, and we would need to reach “net-zero” emissions by around 2050.

Net zero is a term we all need to know, since it is both the solution to many of our climate-related problems and arguably the most difficult challenge humanity has ever faced. It essentially means that almost all of the electricity in the world, and almost all of our industry and transportation, would be powered by clean energy. Many don’t believe it’s even possible. The truth is, we’ve already invented most of the things we’ll need, technologically speaking, to attain net zero. And perhaps more to the point, net zero has to become possible. Net zero is a matter of pragmatism rather than optimism.

To achieve it, we will need to buy time. We cannot just stop putting CO2 into the atmosphere; we will also have to remove some of the CO2 we’ve already released, a concept called negative emissions. “There are no scenarios and no credible analyses that show either a 2-degree or a 1.5-degree world without very large volumes of negative emissions,” says Julio Friedmann, a senior research scholar at Columbia University’s Center on Global Energy Policy. “It’s just the math, that’s all.”

So negative emissions are not really optional. For a livable future, they’re a necessity. And because they will require extraordinary amounts of work and investment—and because they likely constitute the greatest research-and-development challenge of the present century—we need to get started right away.

The stability of our environment already depends on negative emissions, seeing as forests, plants, and oceans absorb about half of the CO2 humanity produces every year. The task ahead amounts to increasing that ratio, so that more is removed with each passing decade. Two obvious strategies involve planting more trees and farming with techniques that sequester more carbon in the soil. Another idea is to plant vast fields of crops, burn them to generate power, and then collect and bury those emissions underground.

But a small cadre of engineers are also working on devices that would do the job directly. Powered by clean energy, direct air capture machines suck ambient air through a filter that separates out CO2. The technology is similar to machines already used on submarines and spacecraft; indeed, the plot of the film Apollo 13 revolves around urgently building a “scrubber” to take excess CO2 out of the environment so as not to asphyxiate the crew. Direct air capture would deploy this same idea, but on a global scale. And we are all, metaphorically speaking, the astronauts.

In speaking with these engineers, you get the impression they have great confidence in their technology’s potential and little patience for gloom-and-doom scenarios. So far three companies have taken the lead in trying to create a market for their efforts, and a few months ago, Climeworks, based in Zurich, announced it would accept payments to pull CO2 out of the air so it could be pumped into the bedrock of Iceland, where it would mineralize. 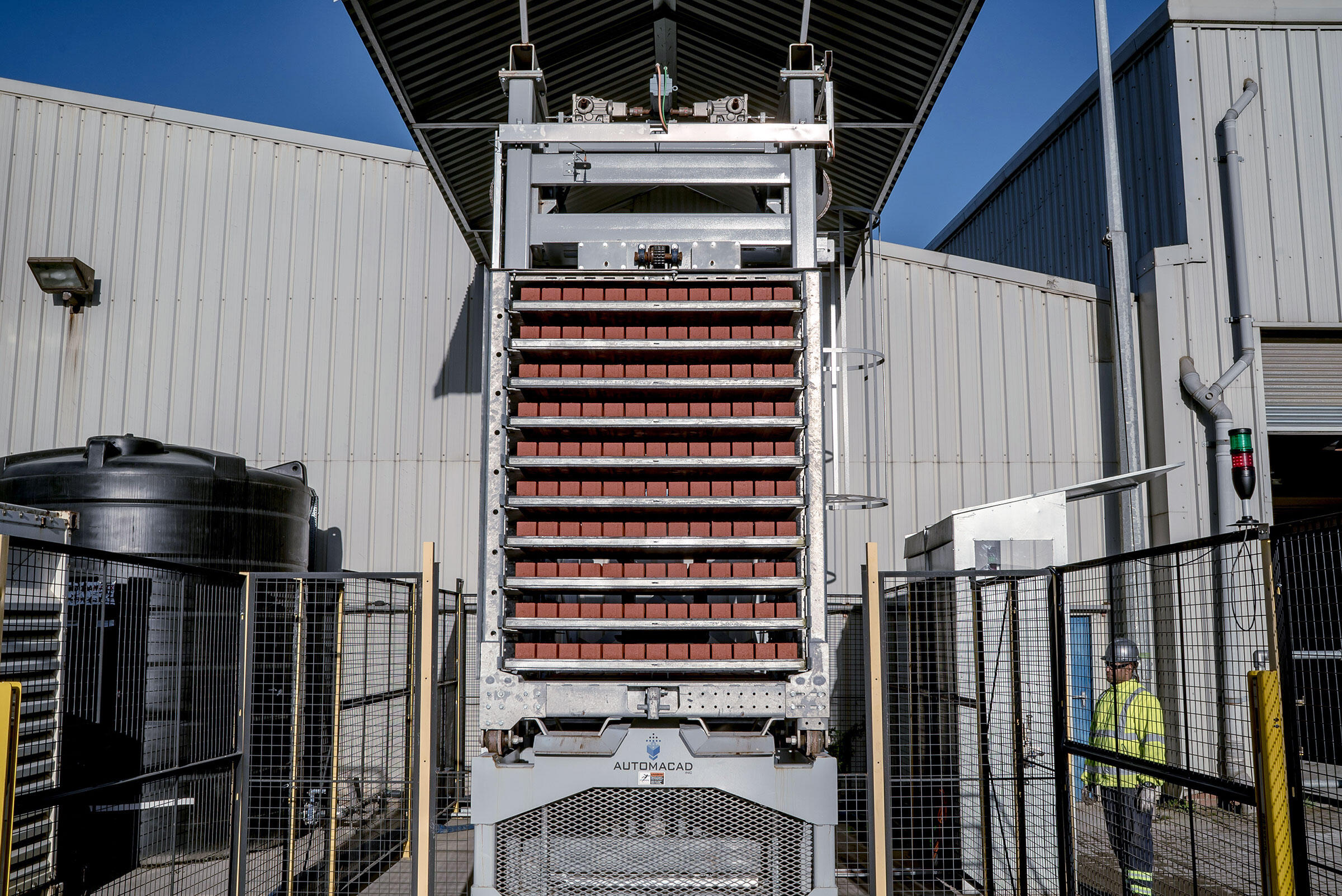 A Solidia Technologies worker prepares concrete bricks to be sealed and infused with carbon dioxide in 2018. The New Jersey firm is experimenting in a small town in England with a new formula that reduces the carbon dioxide emitted in the making of concrete. Photo: Andrew Testa/The New York Times

Climeworks offers a sliding scale for this service: A customer can choose to erase anywhere from 85 kilograms of their CO2 emissions (for $8 per month) to 600 kilograms (for $54 per month). But today the average American emits about 16,000 kilograms, or 16 tons, of CO2 per year, so the cost of living a zero-carbon existence in this manner seems within reach of only the affluent.

That may remain so for the next decade or two, after when engineers believe the technology will mature to the point that prices drop by two-thirds or more. Even then, to make a difference for climate change, carbon capture would need to be cheap enough to be expanded into an industry that resembles the size of the global automotive business, but with a focus on big customers such as governments, corporations, and utilities.

The scale needs to be huge because the problem is huge. Last year the National Academies of Sciences, Engineering, and Medicine issued a report that calculated the negative emissions needed to avoid the most serious impacts of CO2-driven warming by 2100. Jennifer Wilcox, a coauthor and chemical engineer at Worcester Polytechnic Institute, told me her team concluded we need to remove 10 gigatons of CO2 per year by midcentury, and 20 gigatons per year from 2050 to 2100. Those numbers are staggering. A gigaton is a billion tons; at the moment, we are actively removing mere thousands. We therefore need to drastically expand these projects, Wilcox says—working to grow forests, revamp agriculture, innovate technologies, and deploy every tool we have. As she puts it, “We need to do it all.”

Some natural solutions can be deployed at scale today, according to the report. But prospective technologies such as direct air capture still require major advances in design, materials, and ­manufacturing—the kinds of innovations typically funded by governments intent on helping young industries grow. “So far the federal investment in all carbon-removal technologies is $20 million over the past 10 years,” Friedmann says. For comparison, the U.S. government spent about $1.3 billion on R&D for nuclear energy last year, and $75 billion on defense research. “So of course it’s too expensive,” he says. “But we haven’t started the work yet.”

Wind turbines and solar power were also once deemed too expensive, but investments in R&D, along with tax incentives, have succeeded in making renewable energy cheaper than fossil fuels in many locations. Or take LED lights. In 2010, a 60-watt-equivalent LED bulb cost about $40; today, one costs about $1.25. Or flat-screen TVs, or lithium-ion batteries. They all remained out of reach, until they were not.

The writer Bill McKibben once noted that climate change invariably leads us into double binds and triple binds, meaning that whenever we think we’ve found the answer to a problem, we see how it brings us to another problem, and maybe another after that. Negative emissions are a good example of this: They’re part of the solution to a climate crisis we created—and yet we need to be careful how we apply these ideas, lest they lead us deeper into the thicket. Growing too many crops for fuel can encroach on agricultural land needed for food, for instance. And expanding forests in high latitudes could darken geographical regions that previously reflected solar energy, causing them to absorb it and warm the Earth further.

Direct air capture leads to a quagmire of its own: Namely, where do we put all the CO2 we pull from the air? Companies or governments could pay to bury the gas permanently deep underground. Though Climeworks has begun to do this in Iceland, it’s a boutique business. Without a carbon tax or fee (or regulations) it will likely remain one.

In the meantime, a number of entrepreneurs are viewing CO2 not as a waste product but as a commodity. Carbon Engineering, a company funded partly by Bill Gates, captures CO2 and combines it with hydrogen to create an alternative to traditional automotive and jet fuels. Once burned the fuels are no longer carbon negative, but still a marked improvement over those we currently use.

A few months ago, I visited the labs of Solidia, a tech firm in New Jersey that has reengineered how to make cement and concrete, which contribute nearly eight percent of annual carbon emissions globally. CEO Tom Schuler told me his company’s process could reduce the industry’s carbon footprint dramatically, perhaps up to 70 percent. In front of the building, I hopscotched on Solidia’s paving stones; they seemed indistinguishable from those used in landscaping and sidewalks everywhere. Only the CO2 that’s typically released during production was instead broken down and recombined with the concrete, becoming part of the product itself. It may sound prosaic, but the impact of such an innovation could be vast—especially if Schuler figures out how to make the process carbon-­negative, as is his goal. “It’s a significant opportunity,” says Noah Deich, the head of ­Carbon180, a nonprofit devoted to stoking the carbon-removal economy. “Those are big industries.”

For that matter, carbon serves as a building block for many of the world’s industries. And by replacing hydrocarbons pumped from the ground with carbon dioxide pulled from the air, we might subtly change the materials—plastics, carbon fiber, and so forth—that now define our civilization. Volker Sick, a mechanical engineer at the University of Michigan, oversees an initiative to bring such items to market. “I think we have a way to radically change how we make products that require carbon as part of their manufacturing,” he says.

For sure, technology isn’t a catchall solution to the climate problem. We need a rapid, widespread clean-energy transition. We need more trees, better farming practices, resilient landscapes, ambitious policies. And even then, we may find the targets for averting the worst impacts of global warming are elusive, and that environmental losses and grief arrive so quickly they erode our efforts—and our courage. But in taking away a gigaton of CO2 here and a gigaton there, pretty soon we’re talking about a whole lot of negativity. And in that respect, we might see something surprising: Perhaps we can undo at least some of what we have done.

This story originally ran in the Fall 2019 issue as “Reverse Engineering.” To receive our print magazine, become a member by making a donation today.​