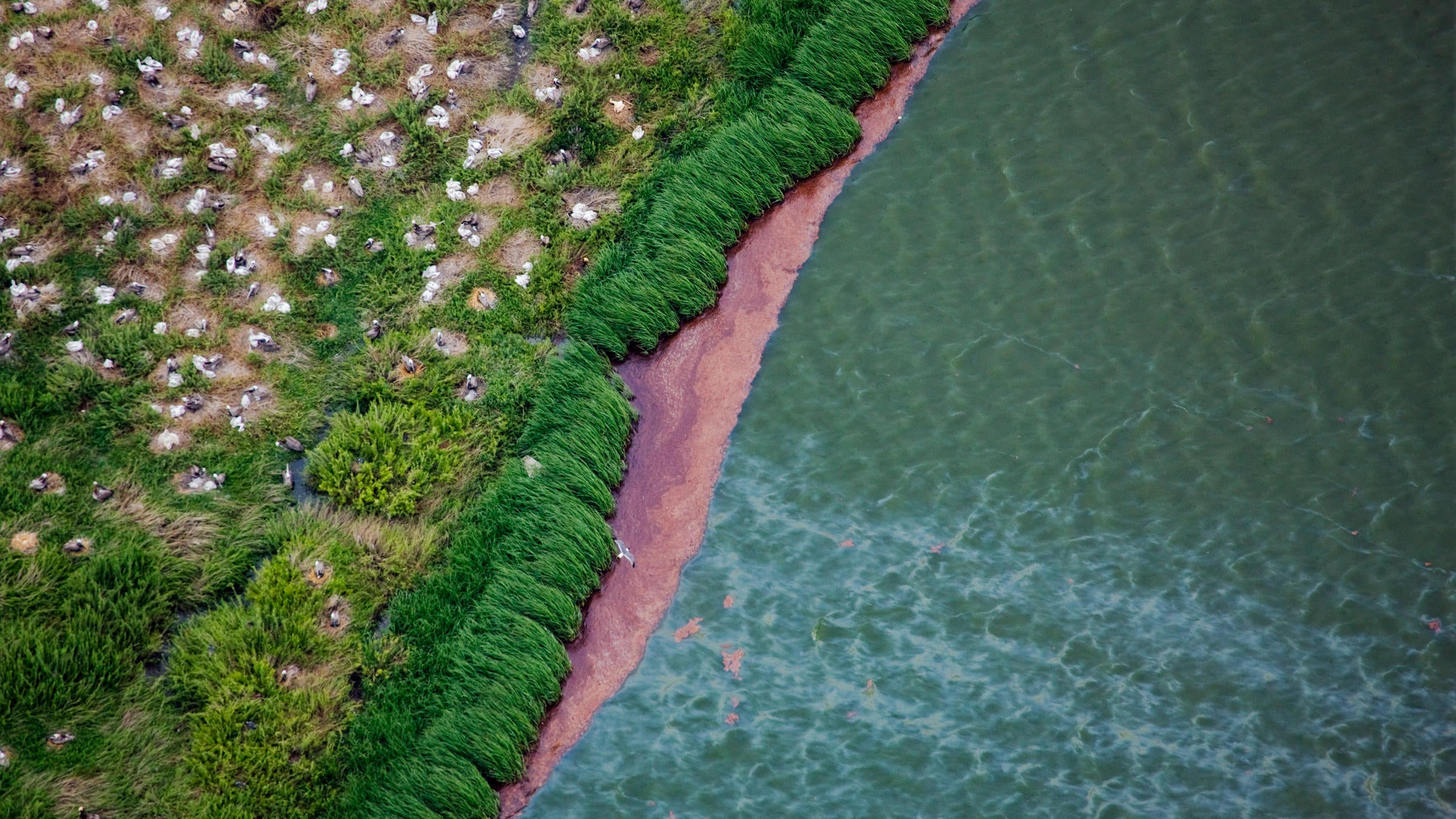 Oil encroaching on a Brown Pelican rookery during breeding season in Barataria Bay, Louisiana. The white forms on the island are juveniles; until recently the species was seriously endangered. Photo: J. Henry Fair

An artist goes airborne to reveal the beautiful scars we’ve left on the earth.

An open window on an airplane in flight is not a good sign—except when aerial photographer J. Henry Fair is one of the passengers. Bouncing over the South Carolina coast in a comically tiny Cessna 172—a burnt-orange interior betraying its 1975 vintage—Fair spots something that catches his eye, then jerks open the glass hatch on the aircraft’s door.

A deafening roar accompanied by hurricane-force wind fill the cockpit, making the plane’s roller-coaster jolts seem all the more life-threatening. Fair isn’t fazed. Shedding his seatbelt, he leans out the window, pointing his Pentax 645 at the coastal strip of Kiawah Island strung out below. As a boy growing up in nearby Charleston, he and his friends used to visit that nearly uninhabited barrier island in search of wild boar. Now the once-untouched shores are punctuated by 6,000-square-foot mansions with aquamarine pools and private decks.

“They’ve pretty much made Kiawah Island into a golf course,” observes pilot Robin Bowers. “The development really does go on and on.”

“My God,” Fair replies, shutting the window on the scene.

Fair, a self-described artist and environmental activist, uses his work to raise awareness about the cost of our dependence on natural resources. But unlike many artists with similar motives, he steers clear of “oily bird” photos, as he puts it. Instead, he takes to the sky, creating large-scale portraits of the planetary scars left by tar sands extraction, mountaintop removal, oil spills, and more. The resulting images are both chillingly beautiful abstractions and frightening testaments to the havoc wrought—but rarely seen or considered—by our industrial pursuits. 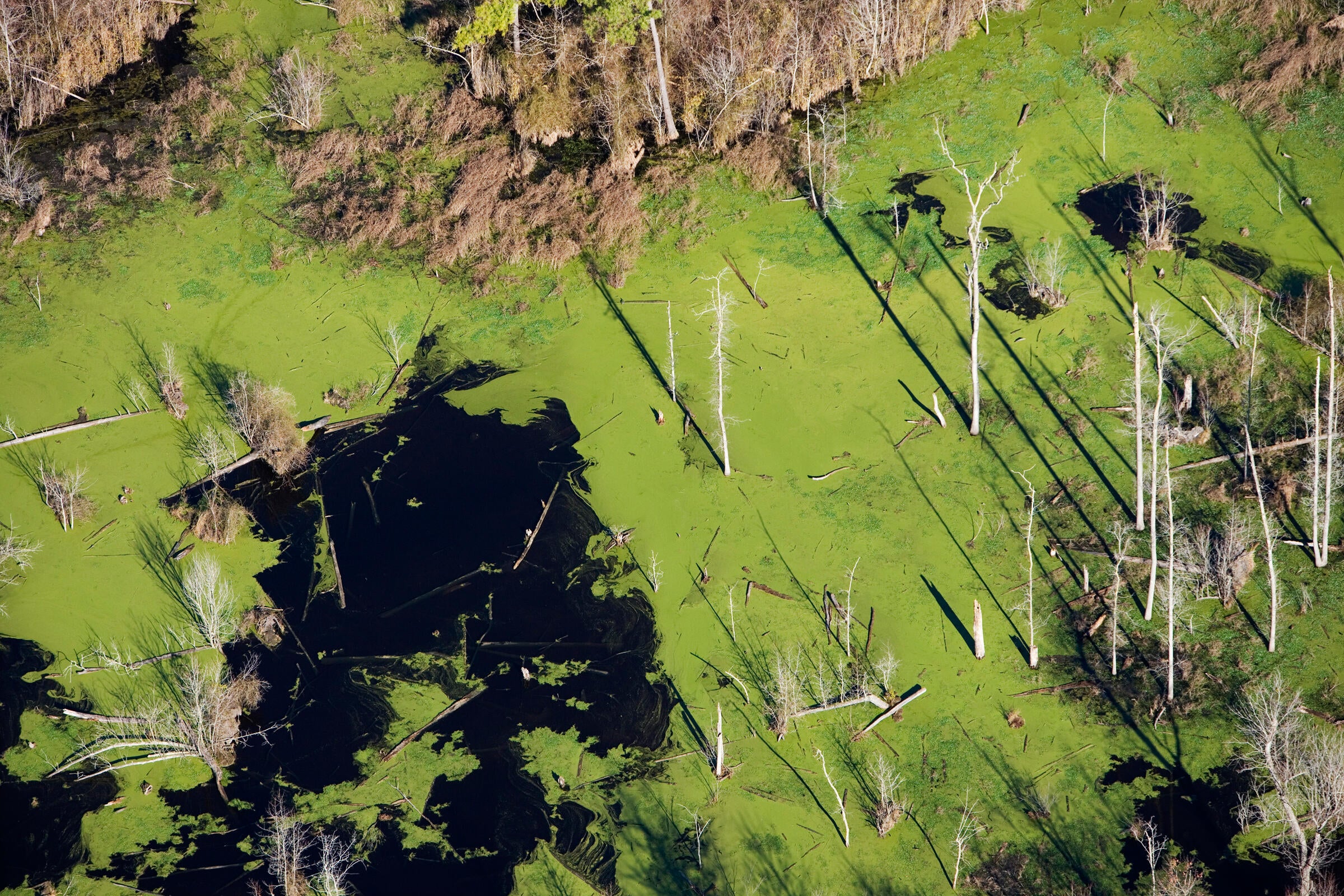 The eastern region of North Carolina is full of estuarine systems—and hog farms. Here algae growth, fueled by an influx of nutrient-rich fecal runoff from a nearby hog lagoon, overwhelms a wetland. The algae explosion causes a boost in bacteria, which absorb the dissolved oxygen in the water, suffocating other forms of life. Photo: J. Henry Fair

“Henry’s work as an artist animates environmental issues in a way that advocacy organizations like ours can’t,” says Elizabeth Corr, manager of art partnerships and events at the Natural Resources Defense Council. “There’s a simplicity to a photograph that really cuts through the policy debates, arguments, and technicalities to help people really see what’s happening.”

Lean, tall, and angular- (he looks like a more free-spirited version of actor Bill Nighy), Fair long ago left his southern home behind, eventually landing in a fifth-floor walk-up in New York City’s East Village that doubles as a studio and apartment. He began accepting commercial gigs to pay the bills, and photographing musicians—one of his lifelong passions—in his free time.

Fair can’t remember a time when he wasn’t keenly aware of the ills we inflict on the planet, but it wasn’t until 1995 that he dreamed up the concept of using aerial photography as a way of exposing them. “I was sitting on a commercial flight, and looked out the window to see a power plant on a river shrouded in fog,” Fair recalls. He grabbed his camera and took a quick snapshot. As the flight progressed, an idea began to take shape: Could aerial photography be a way to snap people out of their environmental apathy?

Fair decided to try, venturing down to Mobile, Alabama, and chartering a plane with “some whack-job Brit.” The pair flew over Louisiana’s Cancer Alley, where Fair frantically snapped photos of industrial plants and their brightly colored mountains of toxic waste and ponds of ultramarine chemicals. He had no idea what he was photographing, so he later drove up and down the Mississippi, inquiring about this or that mystery plant. “I’d go around asking people, ‘Hey, have you seen that giant mountain of white stuff?’ And people would point me in the right direction,” he says. “Then I’d just drive up and say, ‘Excuse me! I need to use your bathroom! And by the way, what are y’all making here?’ ”

He’s come a long way since then. Now, he says, he can recognize an aluminum refinery from 10 miles away.

air is not the first to use aerial photography as a tool for igniting environmental awareness and change, and he cites Emmet Gowin’s monochrome pictures of agricultural fields and strip mining as examples of the documentary power such images can have. Rather than look to other photographers, however, Fair’s aesthetic inspiration comes from the likes of Paul Cézanne and Wassily Kandinsky.

“The impact people have on the planet is a common enough theme among artists, but Henry brings to it a grandeur and mastery of composition that makes you look at it freshly,” says Will South, chief curator at the Columbia Museum of Art, which will host an exhibition of Fair’s photographs in August 2016. “These are not images anyone can take, even with their fancy iPhones.” 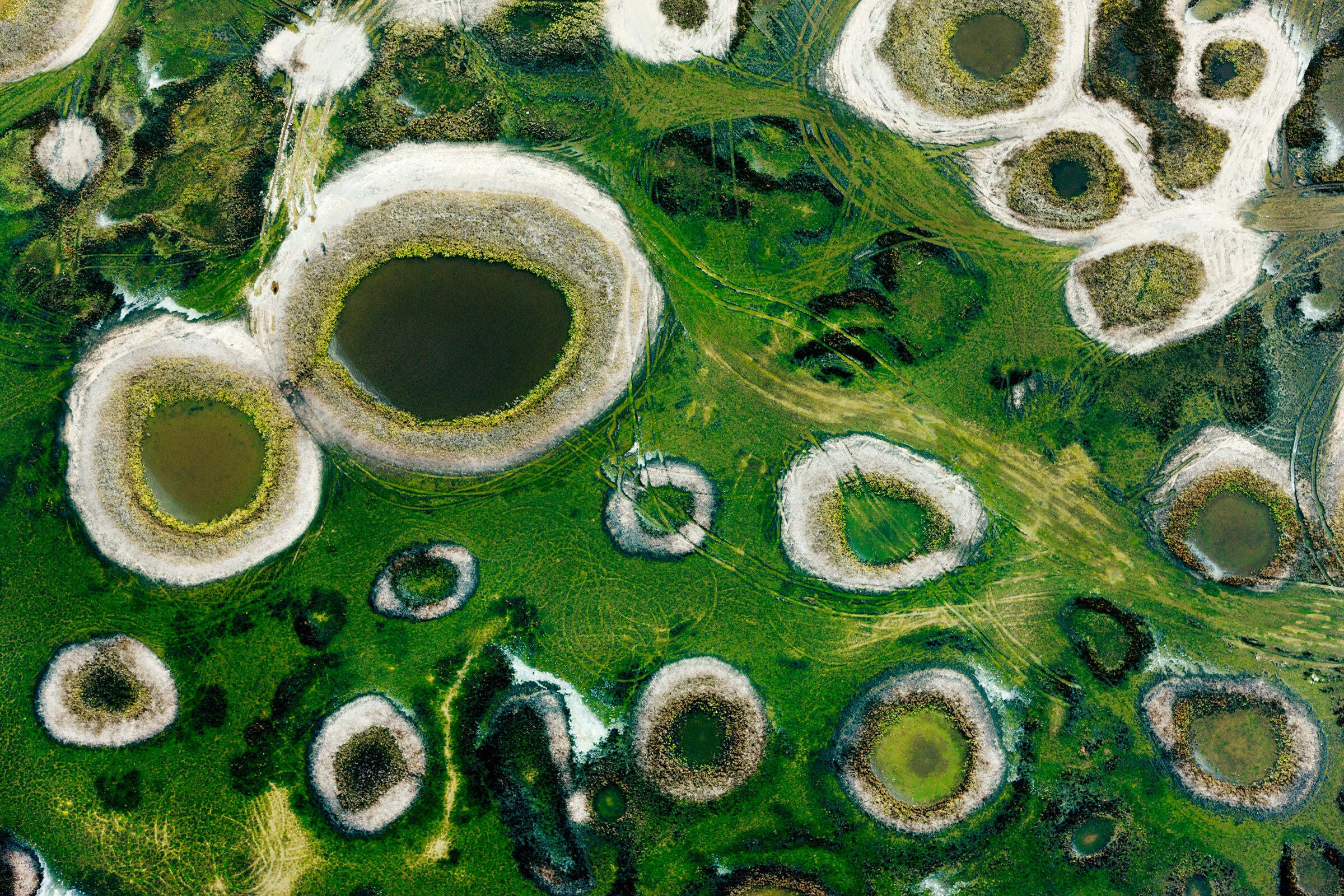 Illegal off-roading leaves its mark on the Brazoria National Wildlife Refuge in Freeport, Texas. Brazoria is fabled bird habitat, with more than 300 species in residence for all or part of the year; neotropical songbirds use it as an entry point to North America, touching down each spring after grueling migrations. Photo: J. Henry Fair

Hypnotic visuals are not the only advantages of Fair’s work, however. Photos taken from overhead have a certain omniscience, rendering us god-like voyeurs as well as watchdogs. “With aerial photography, you can look over a mountain or a fence—you can look anywhere you want—even though there are efforts in this country to prohibit that,” Fair says. “One of the reasons industry is able to do the things that we as a society wouldn’t approve of is because it does those things where we don’t see them.”

Casting a light on the unseen requires not just a willing and able photographer, but also a pilot and plane. Two nonprofit organizations, LightHawk and SouthWings, have been instrumental in providing Fair with the aerial access he needs, and have done so for thousands of other photographers, journalists, scientists, and activists as well. The groups also organize what they call conservation flights, trips meant to change minds and educate passengers—whether they’re senators, preachers, or rock stars. Dozens of volunteer pilots, often wealthy retirees, make the trips possible. “We want people to get out of the aircraft and say, ‘I get it, I now understand this issue,’ ” says Hume Davenport, executive director of SouthWings. “But since we can’t get everybody into one of our small airplanes, we have to find storytellers like Henry who can relate their experience back to a larger audience.”

Occasionally the flights achieve tangible results. Some of Fair’s non-credited images have been used in court cases against polluters—one is ongoing—but he prefers to keep them off the record for fear of retribution from powerful companies or individuals. Hydrofracking, however, is one example he’s happy to talk about: LightHawk first flew Fair over Pennsylvania’s fracking fields in March 2009, years before New York State had determined its policy on the issue. The images, taken over time, showed the march of natural gas wells across the landscape, giving it the look of a giant pincushion. Fair’s pictures went viral, and in 2014, after passing several moratoriums, New York banned fracking. “Were my pictures an instrumental part of that? Yes—as was LightHawk,” Fair says. “We wouldn’t know what hydrofracking looks like if it wasn’t for LightHawk.”

Fair has since moved on to a massive new project: photographing all U.S. coasts to pay homage to those fragile ecosystems and show their vulnerabilities to climate change. The plan is he’ll re-create each of those images 10 years from now, documenting the toll that rising sea levels and development have taken. Having completed the Gulf Coast alongwith parts of the Northeast and the Great Lakes, his latest stop is here in South Carolina, where Jon Engle, a mustachioed former Air Force pilot who volunteers with SouthWings, will fly him up and down the coast to shoot overbuilt, flood-prone communities as well as still-natural areas that have recently attracted developers’ eyes. 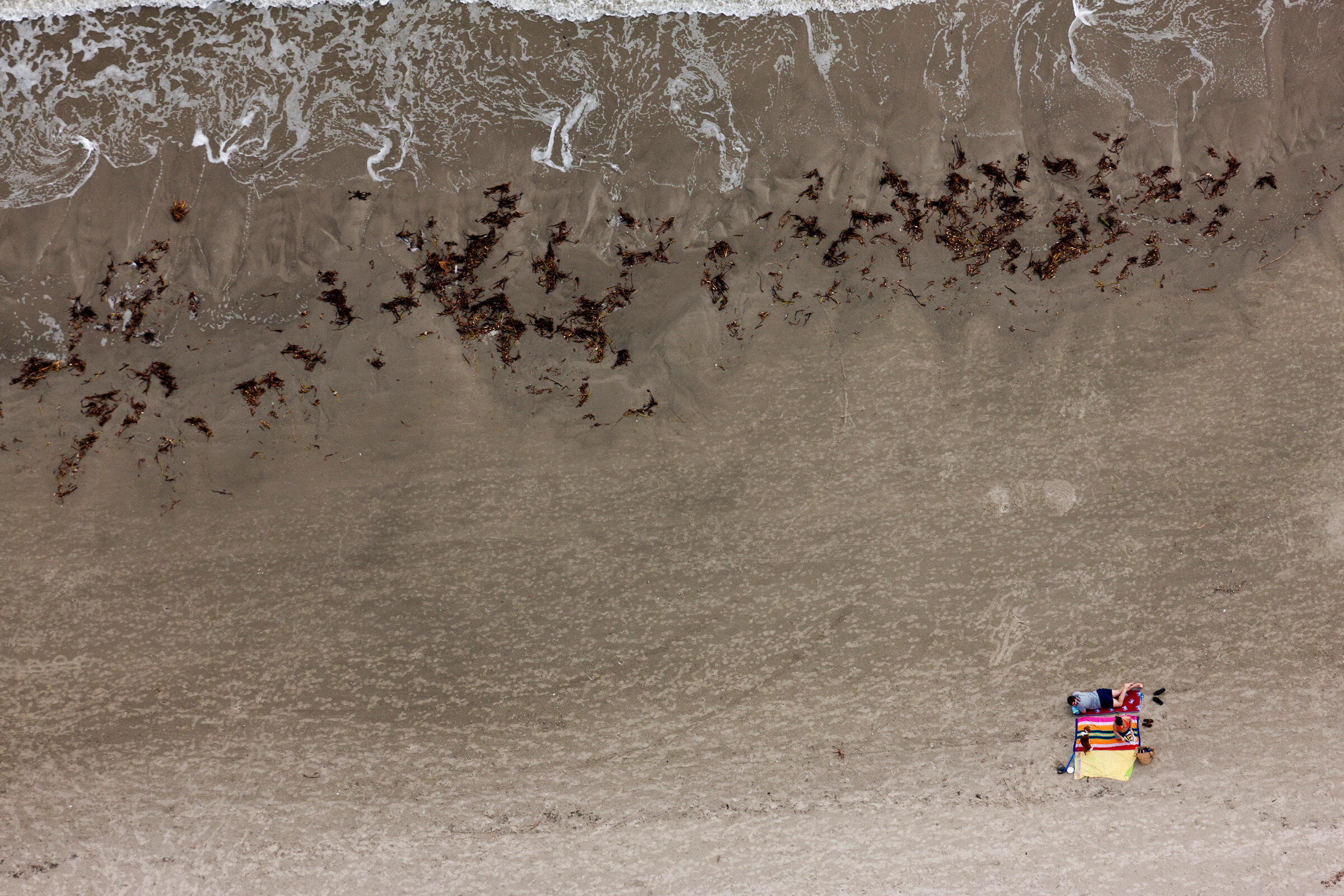 All seems well and good in this image of Galveston Island, Texas, but here the worst effects of climate change, including repeated devastation by hurricanes, are routine—and come at great cost to U.S. taxpayers via federally funded flood insurance. This beach is hemmed in by cruise ships, oil rigs, and an amusement park; sargassum seaweed accumulates along the water’s edge. Photo: J. Henry Fair

n a recent Monday, however, Fair’s trip with Engle was canceled due to weather—a common enough occurrence for an aerial photographer who’s dependent on light-bodied aircraft. Instead of taking to the sky, Fair took refuge in a downtown Charleston bar aptly named Henry’s House. As the drinking progressed, his mood turned pensive. “It doesn’t matter if I go photograph the Mekong River dam in Southeast Asia or the industrial plants of Mississippi,” Fair said, sipping a Macallan 12 on the rocks. “The problem remains the same: People just don’t care, and I don’t know why.”

Most of the people in this bar, he continued, don’t even believe in climate change.

When that claim was met with skepticism, Fair sprung out of his chair. “Okay,” he said, “let’s take a random poll of a Charleston bar!” Approaching three burly lads—members of the Coast Guard—a few stools down, Fair put the proposition to them. “Gentleman, excuse me, but I have two simple questions for you: Do you believe 1) that climate change is real? and 2) that it is driven by human activities?” The conversation ended in a three-way draw. One man did not believe humans are to blame or that climate change is happening, one was undecided, and the third proclaimed, “The humans did it, yeah!”

Counting these results as a surprising victory, Fair seemed in better spirits afterward. Despite the seemingly insurmountable task of getting people to engage, he insisted, he is never tempted to quit his art—or the conviction that it can change minds. “I’m a Southerner,” he said, smiling slyly. “Fighting is in my genes.”