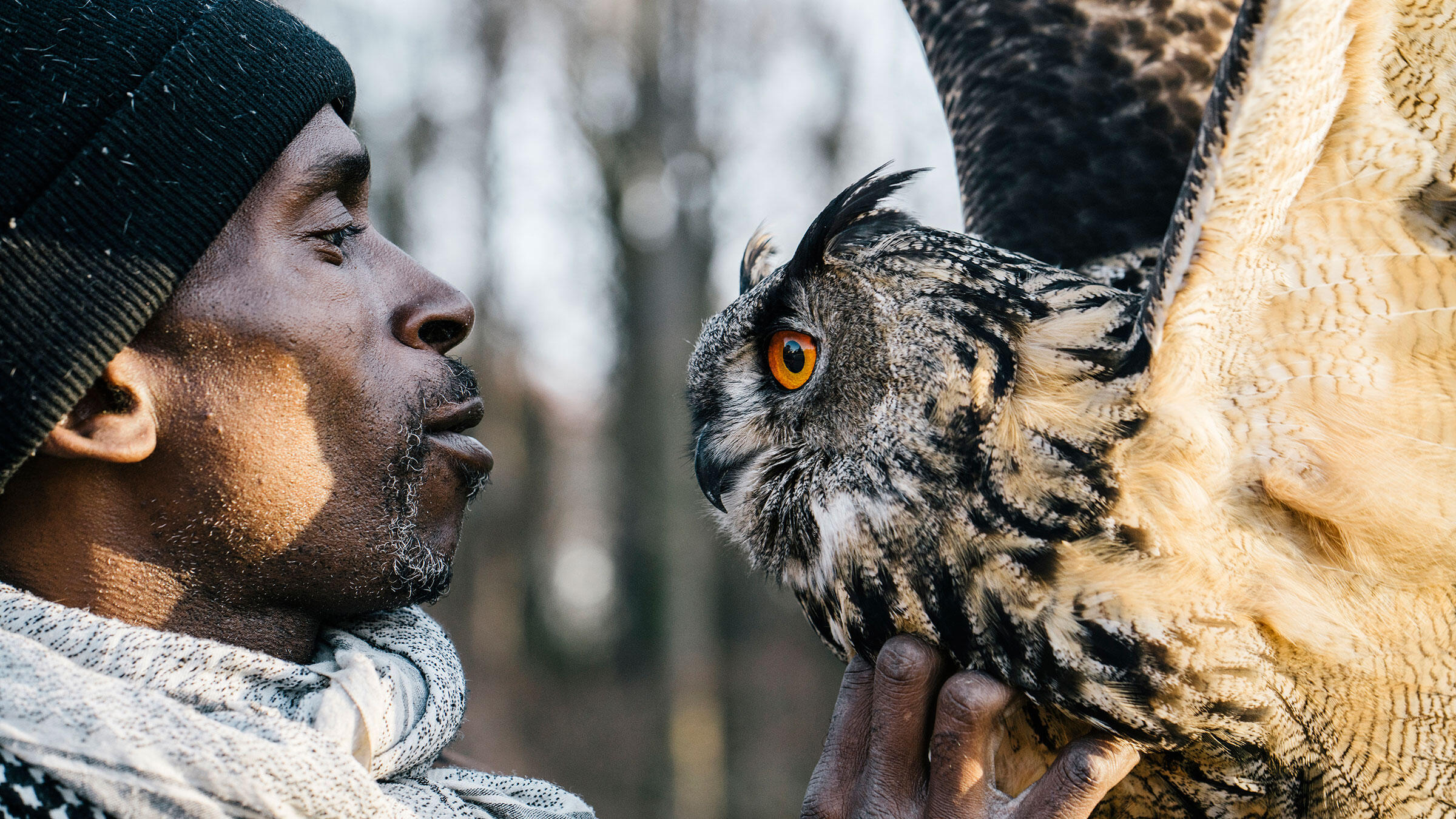 Rodney Stotts poses with Mr. Hoots, a Eurasian Eagle-owl, at the annual Lower Beaverdam Creek cleanup in Hyattsville, Maryland. It's "euphoric," he says. "You're getting this bird that doesn't know you to bend its head down and eat. Then getting it to hop to you, then fly to you, then follow you; now you've built a relationship." Photo: Greg Kahn

How Falconry Turned One Man's Life Right-Side Up

After spending his childhood on the mean streets of D.C., Rodney Stotts found new purpose as a raptor expert and role model for school kids.

By Scott Weidensaul and Greg Kahn

By Scott Weidensaul and Greg Kahn

The first time Rodney Stotts held a raptor on his arm, it changed his life.

He was 28 years old, a former drug dealer who had lost friends—far, far too many friends—to addiction and street violence in Washington, D.C. His mother was a crack addict and dealer; his father had been murdered when Stotts was 16, poisoned by the girlfriend he’d beaten. Rodney had escaped that life a few years earlier by an unlikely route: volunteering with eight others from gritty southeast D.C. neighborhoods for a small nonprofit called the Earth Conservation Corps. It was their job to clean trash from Lower Beaverdam Creek, a junk-filled tributary of the Anacostia River, often referred to as one of the most polluted waterways in the country.

Stotts had seen the subtle hints of the river beginning to recover, mostly through the increasing presence of herons, Ospreys, beavers, and other wildlife. He and his conservation colleagues (not all of whom, sadly, would survive the streets) even helped the U.S. Fish and Wildlife Service and the National Arboretum return Bald Eagles to the Anacostia beginning in 1995, rearing chicks brought from Wisconsin that formed the basis of the first breeding population in the region since 1946.

But those eaglets were purposefully shielded from humans, including caretakers, during their development. Thus it was an owl named Mr. Hoots that truly upended Stotts’s life, and set him on a path to becoming one of the few African-American falconers in the country—one who uses the powerful allure of birds of prey to reach youngsters who, like him when he was a kid, need a new path.

“It was so strange,” says Stotts, now 45, remembering that day in 1998. “I’m standing there, this little black guy from the ghetto, with a Eurasian Eagle Owl on my arm—which was like a dog to me, big as this bird was. It was every range of emotion you can possibly think about. And when I put [the owl] down, I felt empty.”

Now, more than 18 years later, Stotts is a licensed falconer, working as director of raptor conservation and youth empowerment at the nonprofit Wings Over America, and as the raptor program coordinator for Earth Conservation Corps. He visits up to 50 schools in the D.C. area each year and works with teens through partnerships with the Metro Police Department and the district’s Department of Youth Rehabilitation Services. Young people learn to care for the raptors, to handle and feed them. They also learn construction, plumbing, and electrical skills helping to build aviaries on the grounds of the city’s New Beginnings Youth Development Center, where Wings Over America is based, in Laurel, Maryland.

Stotts sometimes takes small groups of schoolchildren into the field to hunt squirrels, rabbits, and voles with his trained Harris’s Hawks. And with him at most programs is the male eagle owl that changed his life—Mr. Hoots. Now Stotts sees the same transformation on the faces of others, channeled through the same immense owl. “As far back as I can remember, Hoots has been there,” Stotts says. 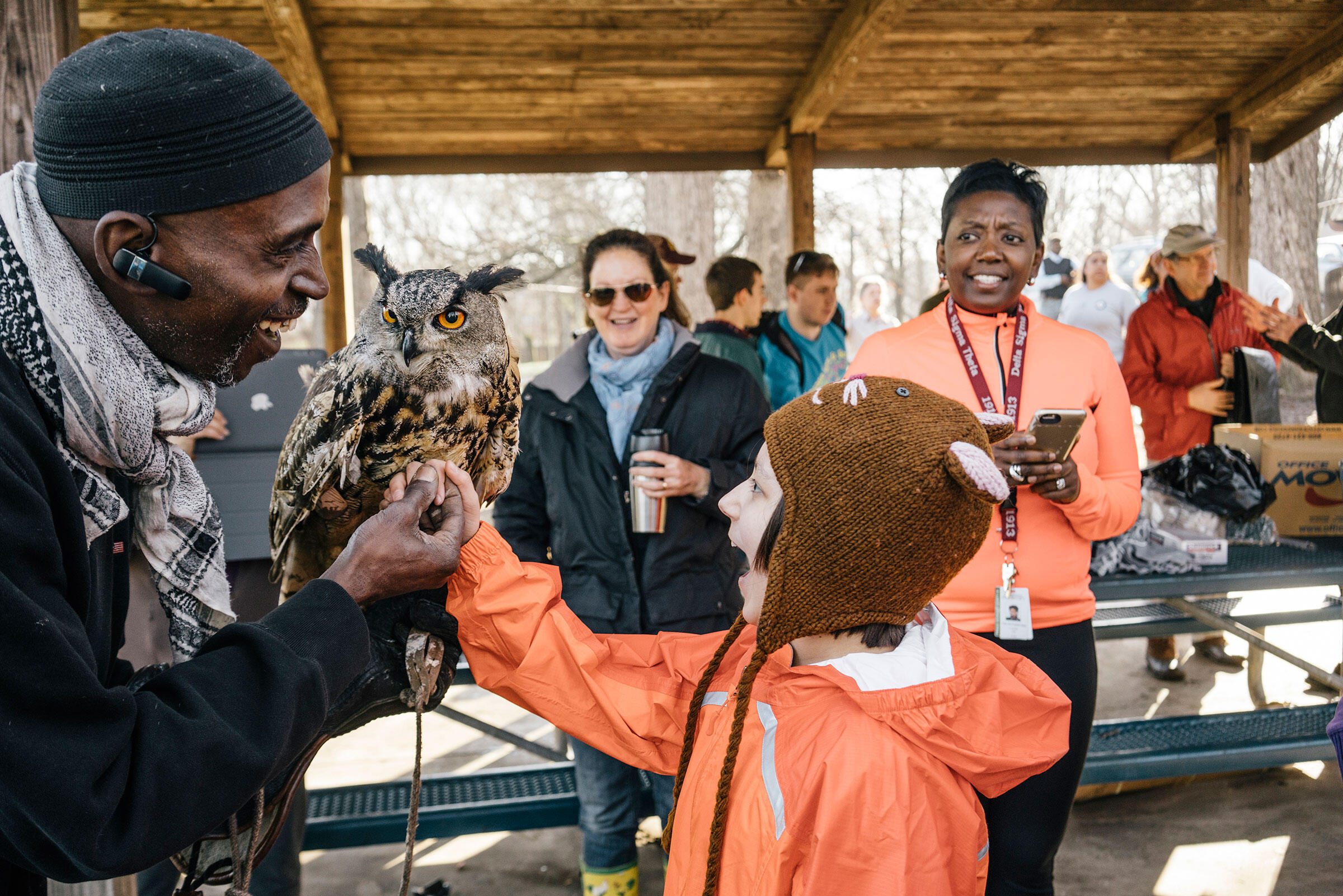 A year after Stotts found falcons, his mother quit using crack, cold turkey. He was immensely proud of her for that, and her death last June left a huge hole in his life. "Everything I'm doing is for her. Without who she was, there's no way I would be who I am." When his grief feels too heavy, there are always the hawks. "Every time it hits me, I fly my birds. Or if it's dark, I'll get a bird and just sit—rub my bird's beak, its feet, its chest and crop." Or he'll share that spark in the eye of a raptor with someone new, like seventh grader Sophia Riazi-Sekowski, 11, at the Beaverdam Creek cleanup. "Every now and again you forget, because you do this every day, of the joy that it brings to people," he said. "The joy it brings you." 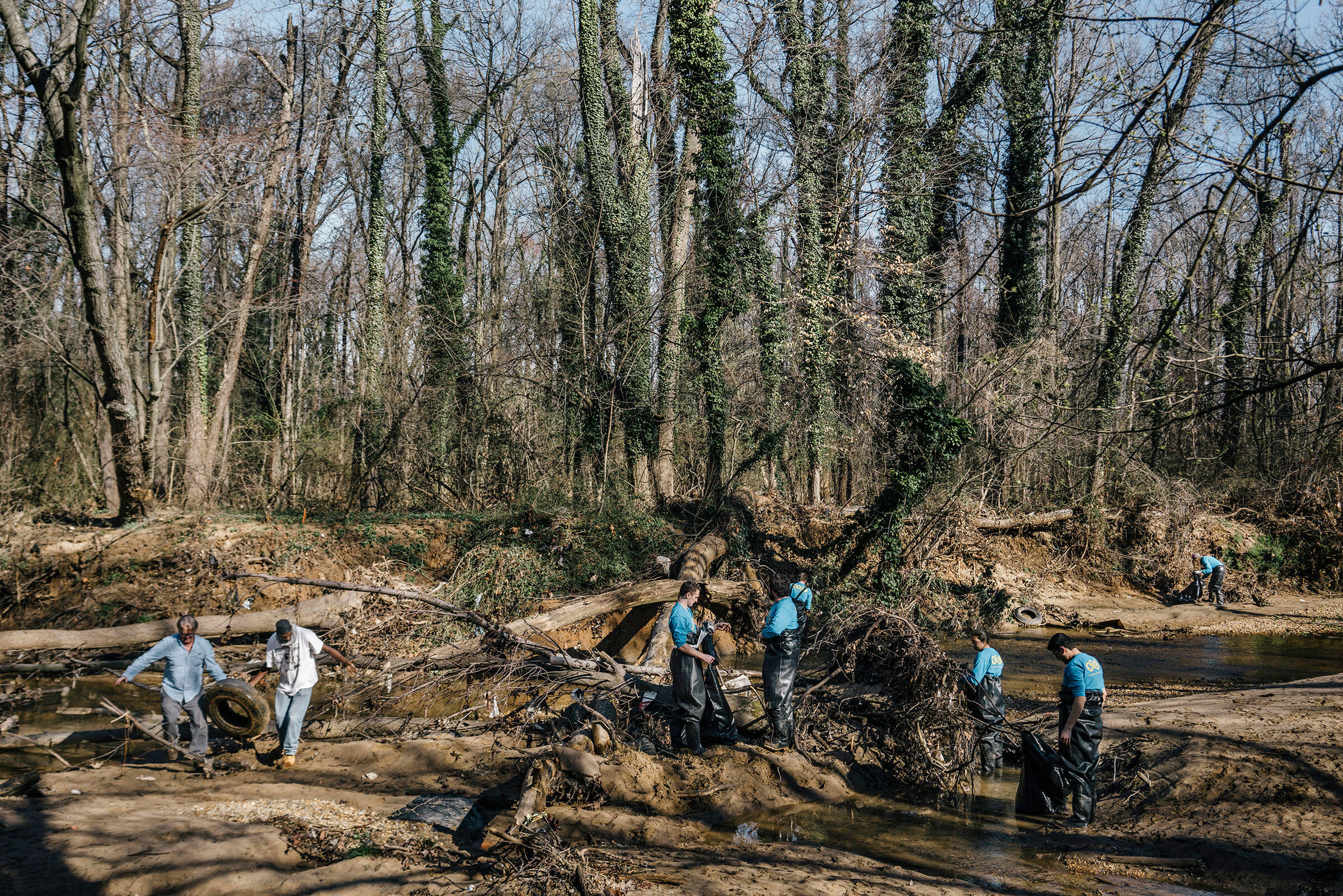 Becoming a falconer demands commitment. First you have to find a sponsor—a licensed falconer willing to take on an apprentice for the sometimes years-long process of training. You also need specialized equipment, like jesses, gauntlets, hoods, gloves, and raptor housing, as well as a deep knowledge of a literally medieval world of jargon and technique. Then you have to learn to work with an animal that is in no way domestic—either a bird bred in captivity, like the Harris’s Hawks Stotts now flies, or an abundant species like a Red-tailed Hawk, caught under tight restrictions and often released after a winter of training and hunting. 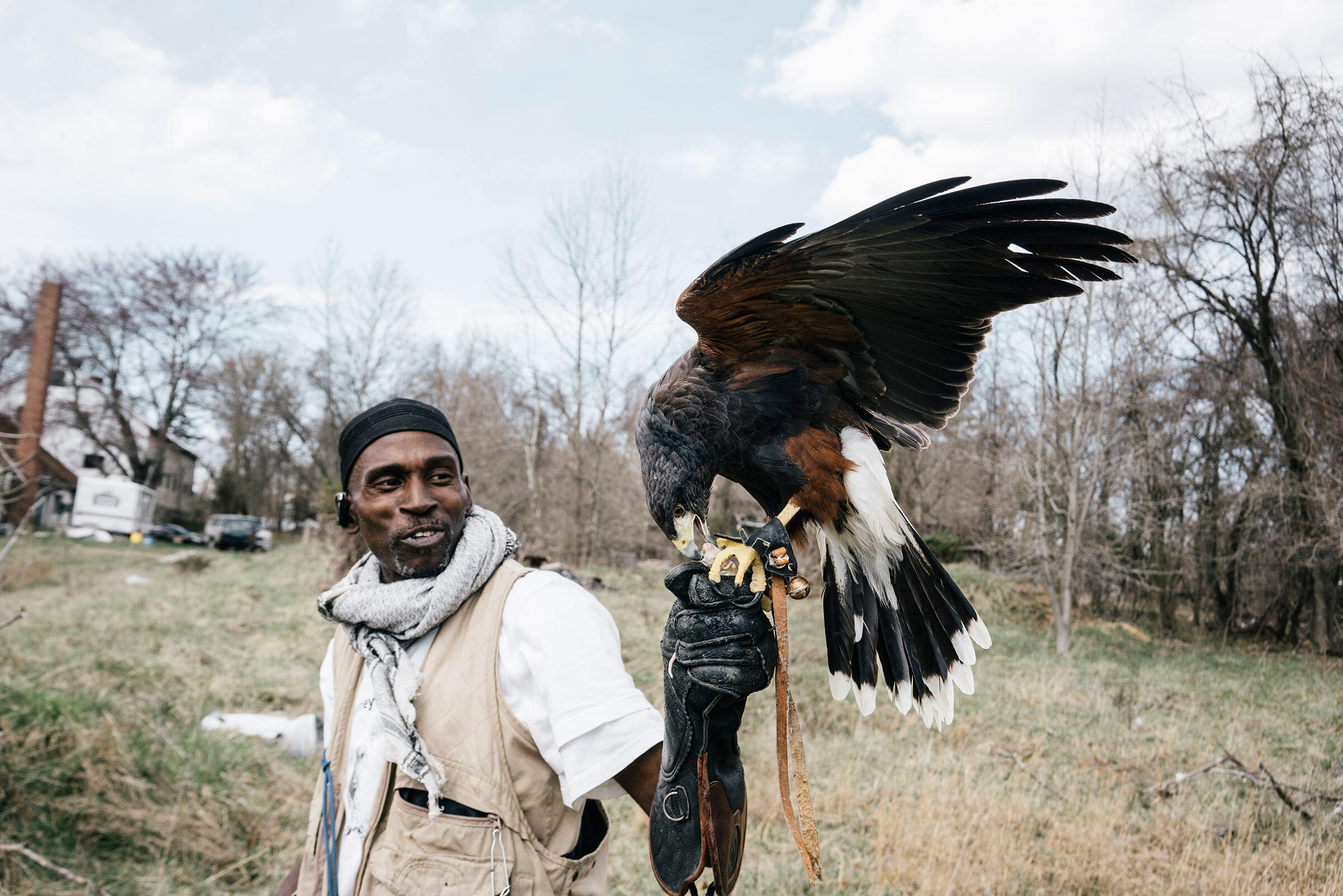 The hurdles involved with becoming a falconer can be high enough for anyone, but Stotts, seen here with a Harris’s Hawk named Agnes, faced some unusual challenges. “When I decided I wanted to become a falconer, I called to find out about getting a sponsor, and the guy said to me, ‘But you’re black.’ And I said, Yeah. He said, ‘Black people don’t fly birds—y’all eat them. These are hawks, you know, they ain’t chickens.’ ”

Despite the racist affront, Stotts persevered. A year and a half later he encountered the same guy at a falconry meet. “You know, I was just joking,” the man said. “Well, I wasn’t,” Stotts replied—he’d completed his apprenticeship and was about to get his general falconry license. This spring he’ll qualify as a master falconer, the highest level in the sport.