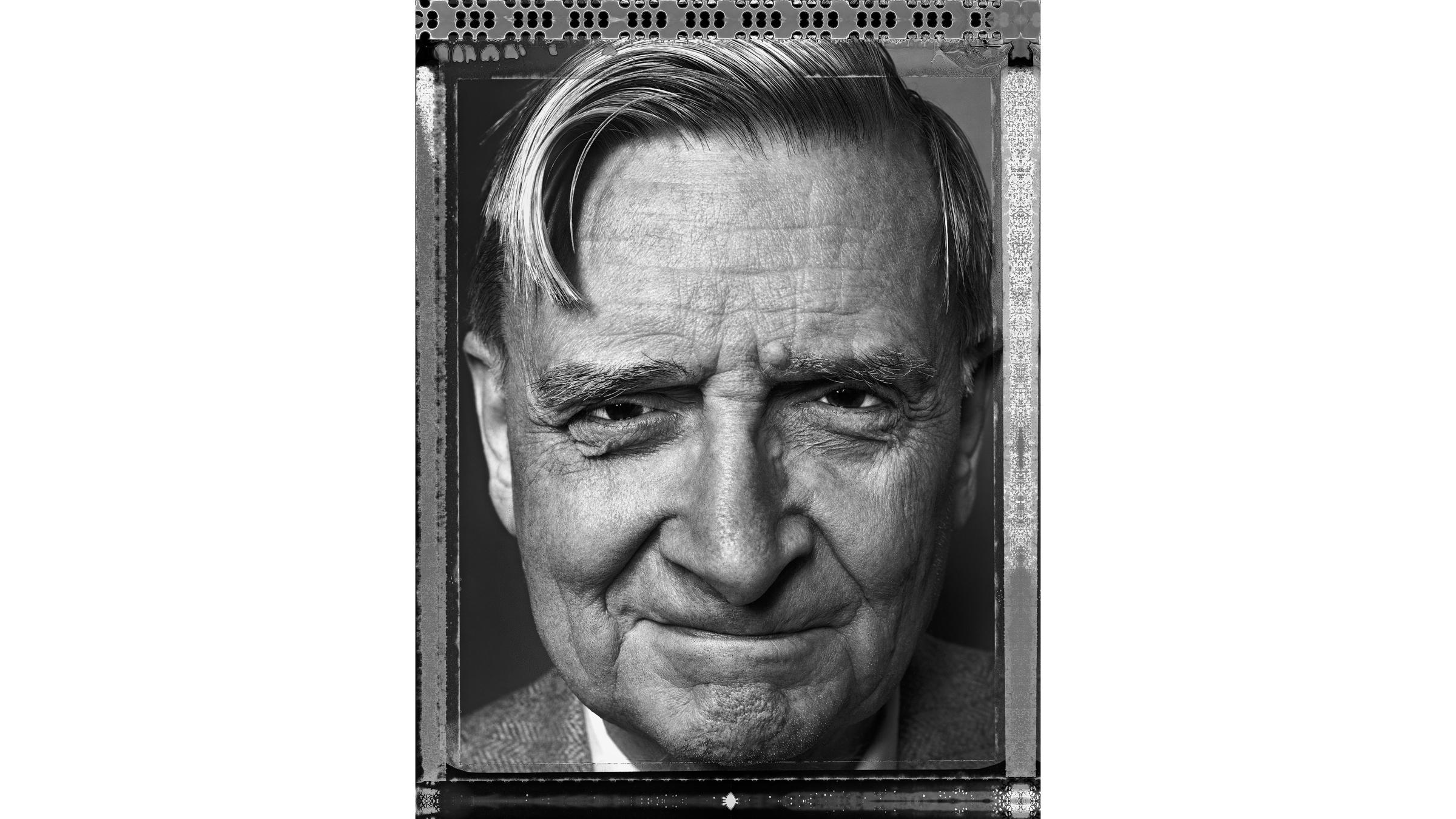 E.O. Wilson Wants Us to Leave Half of the Earth Alone—Here's Why

The famed naturalist's newest book, written from a retirement home, is a provocative and urgent call to save the planet, and its species.

You can’t miss E.O. Wilson. He’s the tall, lanky, Gary Cooper-like presence sitting behind a mountain of papers in the cafeteria of Brookhaven at Lexington, an upscale assisted-living complex roughly 13 miles from Boston.

“Welcome to my office,” Wilson says, clearing a chair for me. “This is where I work. Some writers need to be off by themselves, and there are writers like me who prefer a saloon or a restaurant or whatever.”

E.O. Wilson’s workplace definitely qualifies as “whatever.” It is, in fact, a small table he regularly commandeers in a sunny corner of a dining room at Brookhaven. Nearby, a group of elderly men play cards. At the next table, three women order lunch and boast about their grandkids. No one seems to pay much attention to the silver-haired gentleman by the window with the books and pens and legal pads. Here there’s an unofficial house rule: “You don’t interrupt Professor Wilson while he’s working.”

At 86, Edward Osborne Wilson, Harvard University research professor emeritus of comparative zoology, is among the most famous scientists of our time. Only Jane Goodall and Stephen Hawking can draw a larger crowd. Over the decades he’s made his mark on evolutionary biology, entomology, environmentalism, and literature. In all there have been 31 books, two of which, On Human Nature and The Ants, received the Pulitzer Prize.

He’s written many of those books from his unconventional office at this retirement community, which features a staff of doctors, maid service, a pool, and two very nice restaurants. “Here my wife, Irene, is able to get what she needs in medical attention all the time and I am able to travel whenever I need to,” he says. “There is no household maintenance to worry about. The result is that I’ve written 13 books in 13 years. It’s like a hotel.”

My visit coincides with the completion of Brookhaven book No. 13, tentatively titled Half-Earth: Our Planet’s Fight for Life. Scheduled to be published in March 2016, Half-Earth is centered on the unfolding extinction crisis. “Everywhere, you see it,” Wilson laments. “In New Guinea, forests are cut wholesale. In Central America, trying to find the forests, you have to go such long distances. The extinction is accelerating. The conservation organizations, they’ve only saved 20 percent of the endangered species. It’s far below what’s needed.”

Half-Earth is his answer to the disaster at hand: a reimagined world in which humans retreat to areas comprising one half of the planet’s landmass. The rest is to be left to the 10 million species inhabiting Earth in a kind of giant national park. In human-free zones, Wilson believes, many endangered species would recover and their extinction would, most likely, be averted.

In many ways this respected scholar is risking his reputation of a lifetime with such a radical idea. But then, frankly, he doesn’t think he is the radical. He’s shocked at how inured we’ve all become to habitat destruction. He believes the public is getting bad information, and he hopes to turn the discussion around with some facts.

“It’s amazing the things you hear these days,” he tells me while ordering us a vegetable sushi luncheon. “You actually hear people say the Earth is so damaged that you might as well let humans take over whatever is left. There’s a motley group going around saying that extinction of so many species is nothing to worry about because we can revive them by cloning their DNA! Still others suggest we shouldn’t be concerned because there have been great extinctions in the past and biodiversity has bounced back afterwards. They don’t mention it took millions of years.”

Wilson believes the policy wonks he calls “Anthropocene enthusiasts” have found an audience only because “we’re in love with technology. Silicon Valley has created a new Olympus with this feeling that American and Asian genius can pull off miracles. But extinction is irreversible.”

While many agree with his assessment of the state of the planet, Wilson is not without critics. He and Richard Dawkins, intellectual rivals in the field of genetic theory, have publicly sparred about their conflicting ideas on evolution. In 2012, when Wilson released The Social Conquest of Earth, Dawkins wrote in Prospect magazine that it was filled with “erroneous and downright perverse misunderstandings of evolutionary theory.” When later asked by BBC News television about his quarrels with Dawkins, Wilson replied, “There is no dispute between me and Richard Dawkins and there never has been, because he’s a journalist. Journalists are people who report what the scientists have found, and the arguments I’ve had have actually been with scientists doing research.” This further enraged Dawkins, who tweeted that Wilson is plain wrong on his theory of kin selection.

In another skirmish, Wilson and Nobel Laureate James Watson, who co-discovered the double-helix structure of DNA with Francis Crick, regularly went head-to-head about the relative merits of ecologists and molecular biologists. Watson called naturalists the “stamp collectors” of the science world, and Wilson referred to Watson as the most mean-spirited academic he had known during his early years on Harvard’s faculty.

Wilson and Watson have since made peace, and of course these sorts of spats between colleagues are not uncommon—scientists, like many academics, are driven by competitiveness to prove and disprove one another’s theories. “Ambition and competitiveness are essential to do really good work,” Wilson once said at a sold-out Harvard event at which NPR’s Robert Krulwich mediated a conversation with him and Watson. “I didn’t show it as much as Jim because I am a Southerner.”

Competition aside, Wilson is widely accepted as one of the greatest researchers, theorists, naturalists, and authors of our time. He is known as the father of the concepts of sociobiology and biodiversity, and he’s highly celebrated for his lifetime of environmental advocacy. “Ed Wilson personifies biodiversity. He is unapologetic about his passion for the variety of life, enthusiastic about the smallest creatures,” says Duke University ecologist Stuart L. Pimm, one of the world’s most prominent conservation biologists. “Because his science is so powerful and so very relevant, [he is] the world’s spokesman for conservation.”

Supporters say he will be largely respected for his opinions in Half-Earth, even if they are somewhat harsh. Elizabeth Kolbert, who won the Pulitzer Prize this year for The Sixth Extinction, her own investigation into species decline, believes that anything Wilson writes will get a serious hearing. “I think Ed Wilson has influenced everyone working in the field of conservation today,” she told me, “and certainly he has influenced everyone writing about it. Partly this is owing to his pioneering work out in the field, partly to his wonderful books, and partly to his synthesizing intelligence. He has managed to confront the world with some pretty bleak facts without ever losing his sense of wonder.”

Wilson’s wonder is born of a lonely 1930s Alabama childhood. When he was seven, his parents divorced. Looking for solace, the young boy retreated into Alabama’s rich forests and to the Gulf shore, “to get meaning from nature.”

Which he found. As a result, even now, when this scientist speaks of his childhood, some of the recollections are joyous. “I grew up in what is probably the biologically richest part of America: the Gulf Coast. It has the largest number of turtle species in the Western Hemisphere and 40 species of snakes,” he says. “I grew up in a wonderland. Wherever I went, there was always nature.”

As a very young child, Wilson thought he might someday become an ornithologist. But in the same year his parents divorced, a fishing hook accidentally snagged and blinded his right eye. “Since you need both eyes to be a birdwatcher, I went into butterflies,” he says. “I even had a fly period.”

At the age of nine, during a time when his father, also Edward Wilson, an auditor for the U.S. Department of Agriculture, was posted in Washington, D.C., Wilson had an encounter with a colony of citronella ants in Rock Creek Park that gave him a vocation. Those ants, he recalled in his 1994 memoir, Naturalist, were “short, fat, brilliant yellow, and emitted a strong lemony odor.” He was fascinated. After that his direction was clear: He’d be a myrmecologist—an ant man.

Back in Alabama a few years later, Wilson undertook the study of every one of the state’s hundred-plus native ant species. When he was 13, he spotted a newly arrived colony of South American fire ants at their point of entry to North America—the docks of Mobile. His subsequent report, in 1949, was the first documentation of this invasive pestilence, which now ranges from Florida and through the Southwest. He was 19.

E.O. Wilson’s trademark has always been his obsessive curiosity. He jokes: “I’ve often said that if I were in a prison camp, I would organize myself to study the insects in the compound. I could keep quite occupied, providing I could get some kind of paper and a magnifying glass. Of course, it would have to be a fairly mild prison camp. Nothing too terrible.”

Perhaps because his best childhood moments were spent on Alabama’s Gulf Coast, Wilson’s current big project is trying to get a new national park designated for the delta floodplain region near Mobile. “It’s such a beautiful area—migrating birds, turtles, ducks,” he says enthusiastically. “If approved, it would include public lands in the jungle-like Mobile-Tensaw River Delta and the deep ridges of the highlands immediately to the north. This is the second-largest river delta in the United States, and it is where I grew up collecting snakes and insects. People have no idea of the biological richness there.”

By helping to preserve this piece of American wilderness, Wilson may well be making a down payment on some of the ideas in Half-Earth. In encouraging communities to create preserves and parks, he is helping to save precious patches of remnant wilderness. Overseas, he’s aided philanthropist Greg Carr in saving and restoring Mozambique’s Gorongosa National Park, where the land and the animals were nearly destroyed by decades of war.

Of course, bringing a national park to Alabama won’t be easy. A bill to include the region in a study to determine if it should be granted park status has lingered in a House subcommittee since September 2013. Wilson won’t give up easily. In recent months he’s quietly met with business and civic leaders throughout Alabama, enlisting their support. And he’s serving as an adviser to a committee of local environmentalists who are beginning a scientific report on the ecology of the Mobile delta.

If there’s an urgency driving both his writing and his activism, Wilson says, it’s because he feels the press of time and he’s still got a lot to do. Half-Earth, he believes, is more than a polemical warning about the fate of the natural world; it’s a summation of his life’s work. He likes the book a lot.

“I may not have many years left,” he says. “So whatever is important to me, the arguments to be made must be done now. I’ve done it. I am feeling pretty good right now.”