See One of the World’s Coolest, Most Specialized Raptors in Action

Snail Kite numbers in Florida dipped to a worrying low a decade ago. Since then, an influx of exotic snails has helped the endangered birds rebound.

By Mac Stone and Alisa Opar

By Mac Stone and Alisa Opar

Snail Kites soar over Florida wetlands, scanning for apple snails below. When the birds spot their prey, they turn in toward the wind, spread their wings wide, drop, and grab their quarry in an acrobatic assault that generates the merest splash.

Mac Stone has spent weeks on Lake Okeechobee, where most of the nation’s nearly 2,100 Snail Kites reside, capturing intimate portraits of the endangered raptors. He’s collaborating with biologists monitoring kites’ nesting success and diet, which consists almost entirely of apple snails. To capture the unprecedented shots, Stone built a submersible platform outfitted with a camera, which he triggered from 20 yards away. At first, he tried using discarded shells to attract the birds. They didn’t bite. So he walked around the waist-high water, feeling for snails with his bare feet (and keeping his eyes peeled for alligators), collecting a few at a time to place on the platform. That did the trick.

(Audubon opposes baiting birds of prey for the sake of photography, but makes exceptions for sanctioned conservation projects done in conjunction with scientists, like this one.) 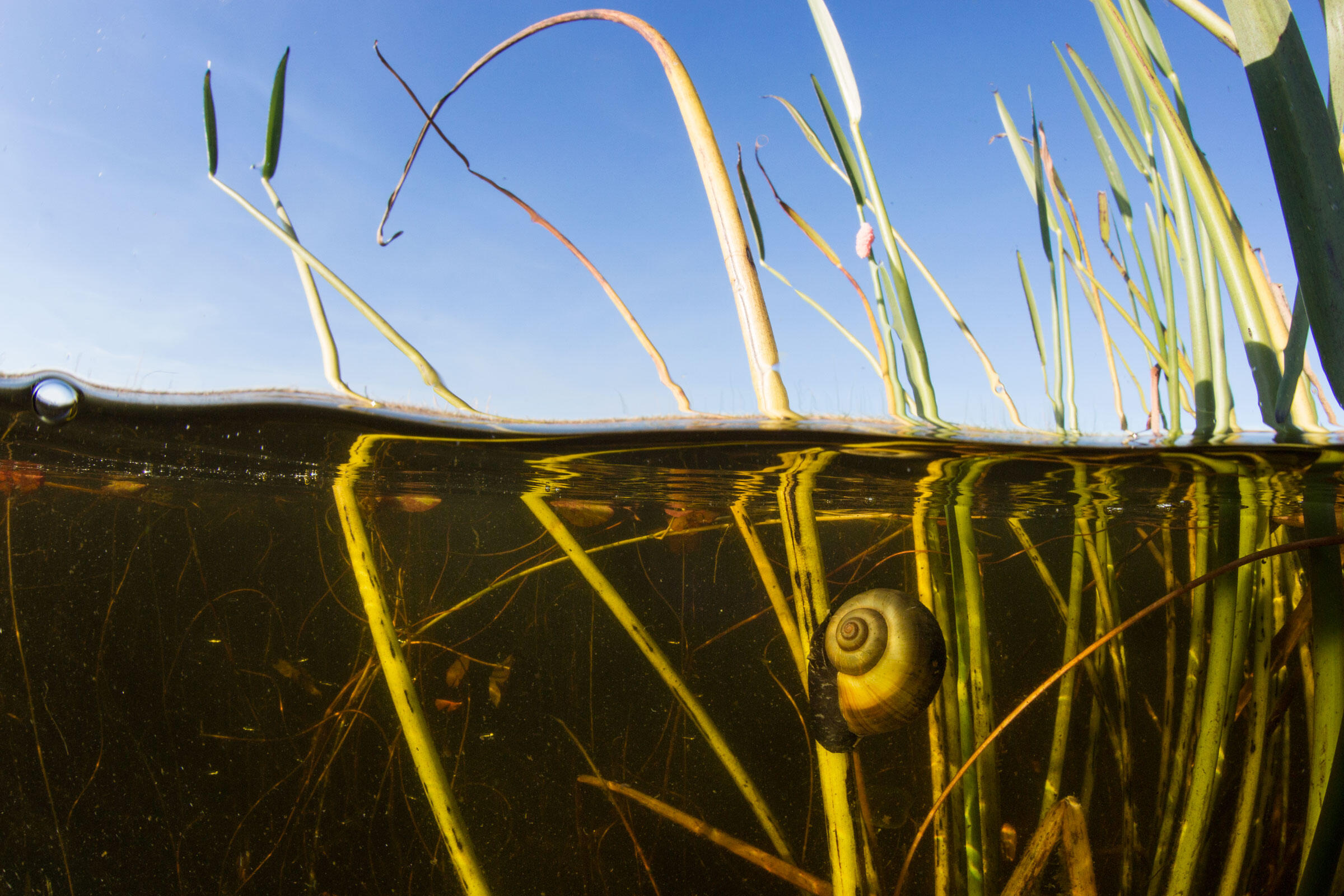 The Snail Kite’s fate is closely tied to that of its prey. Developing wetlands and restricting natural water fluctuations spurred the apple snails’ decline. The kites followed; their numbers plummeted to 800 in 2008 from 3,400 in 1999. Scientists credit a recent resurgence with habitat restoration and the influx of the native gastropod's South American relative, the island apple snail. 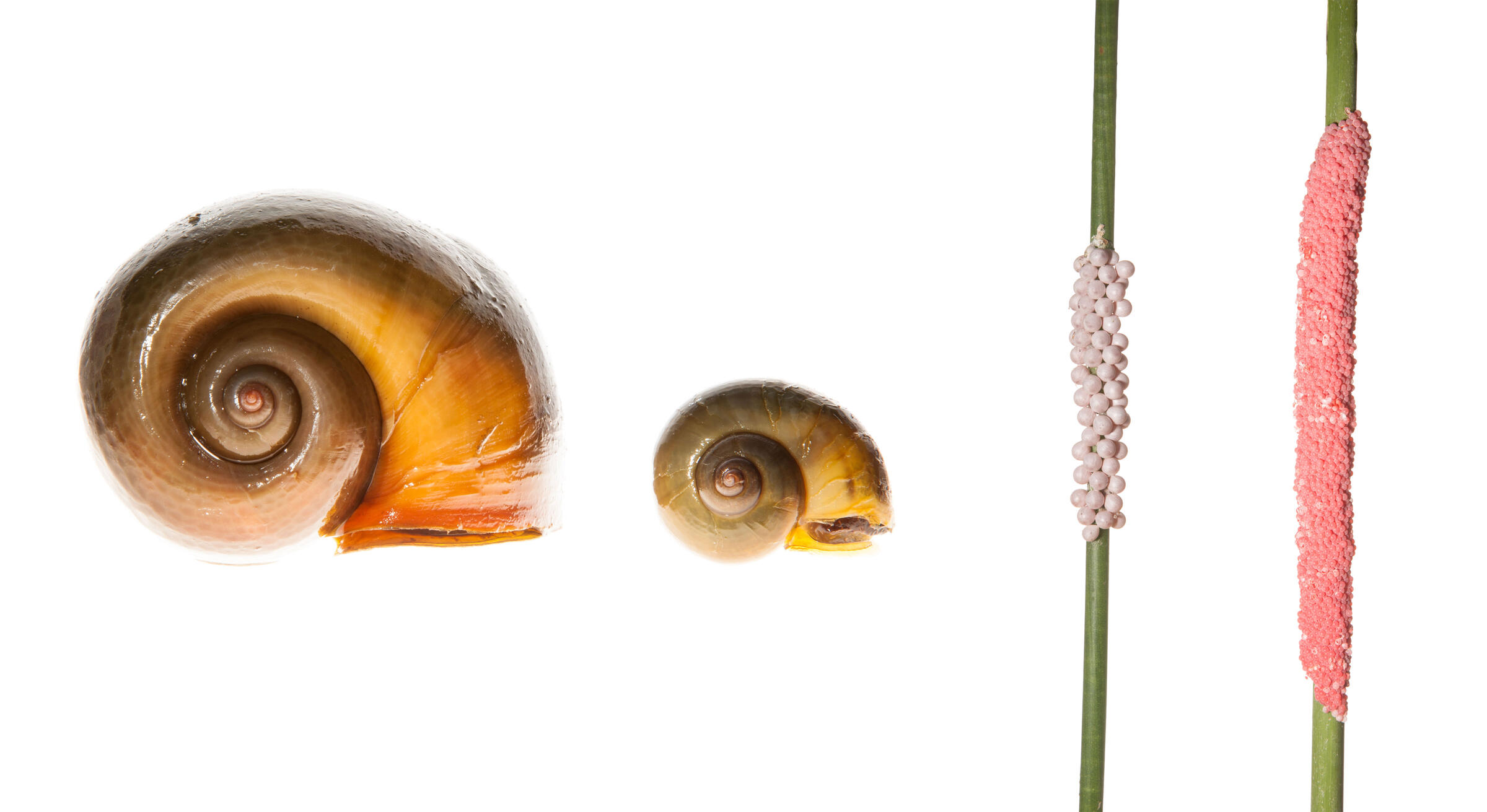 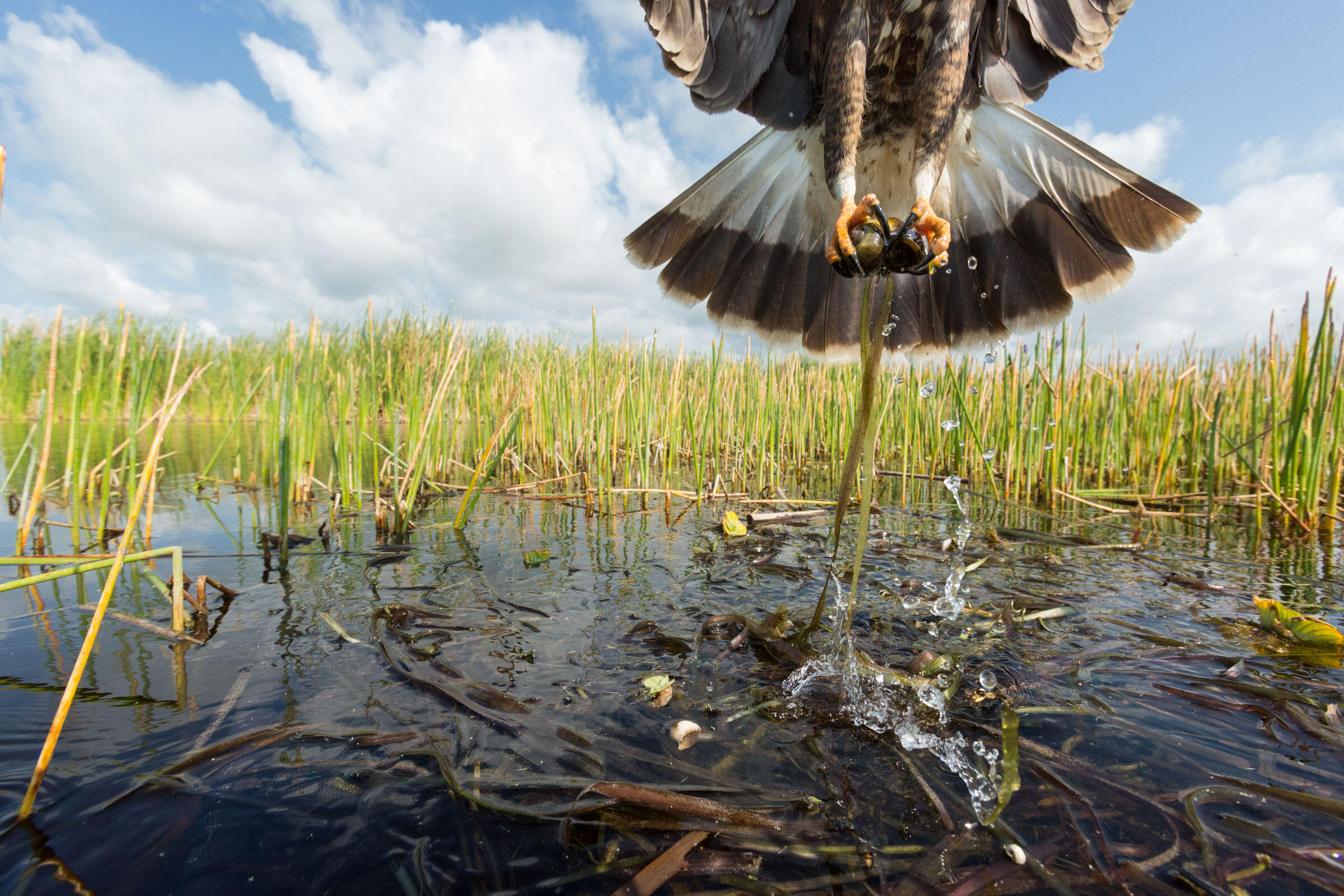 While Snail Kites consume both native and exotic snails, Stone’s work has revealed that the already picky eaters have a preference: When Ping Pongball–size apple snails and the larger invasives were placed together on the platform, the birds chose the native species every time, as this female did. Once it has its prey, the bird transfers the snail to  its beak for the flight back to its nest area, or to rigid cattails or an artificial perch. There the Snail Kite pries open its meal. Popular dining sites are easy to spot, says Stone—simply look for large piles of empty shells. 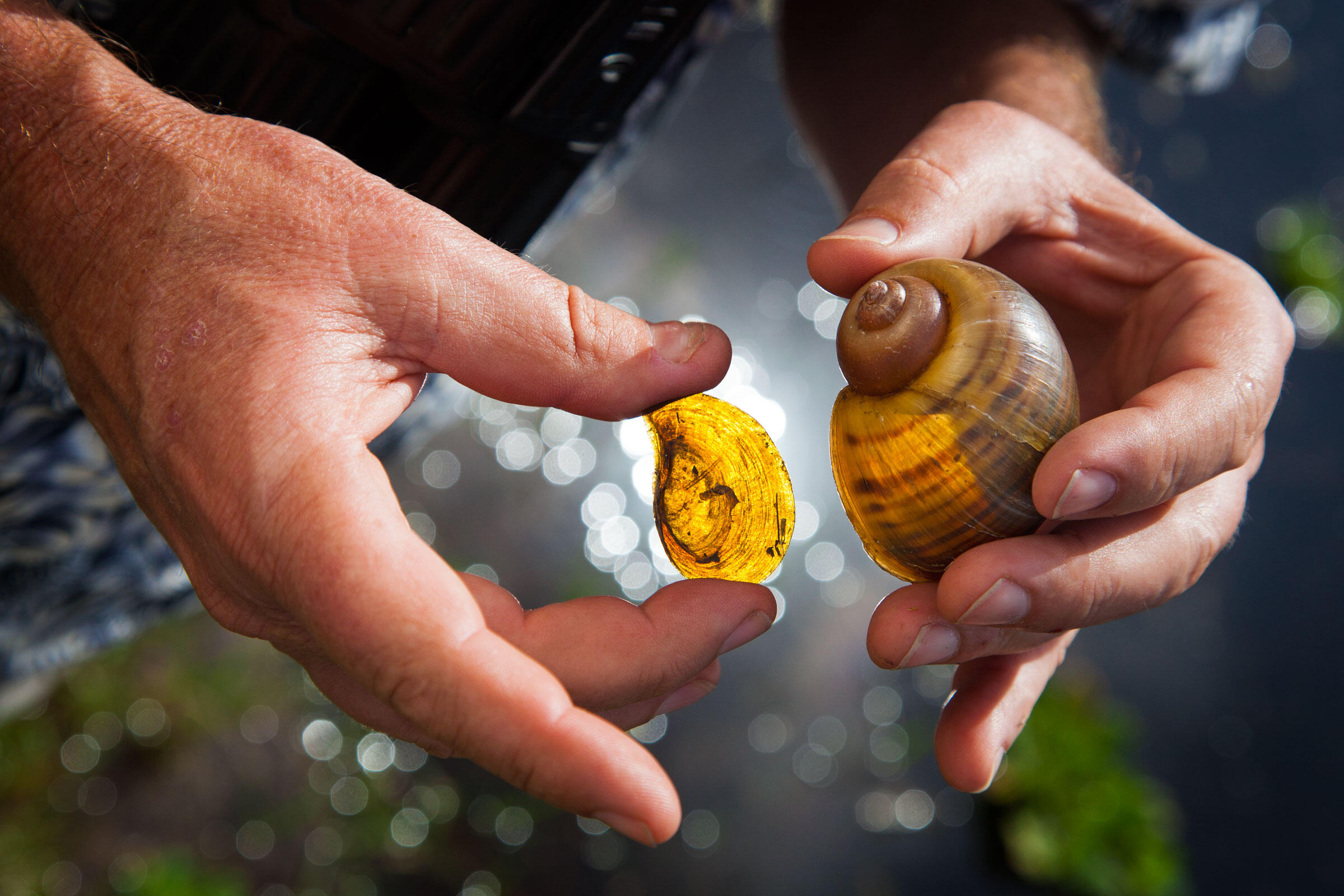 Snails surface only briefly to breathe, lay eggs, or mate—and that’s when kites strike. The raptors are highly evolved diners that use their curved beak to pry off the operculum, a thin plate that seals the shell’s opening, to reach tender meat. 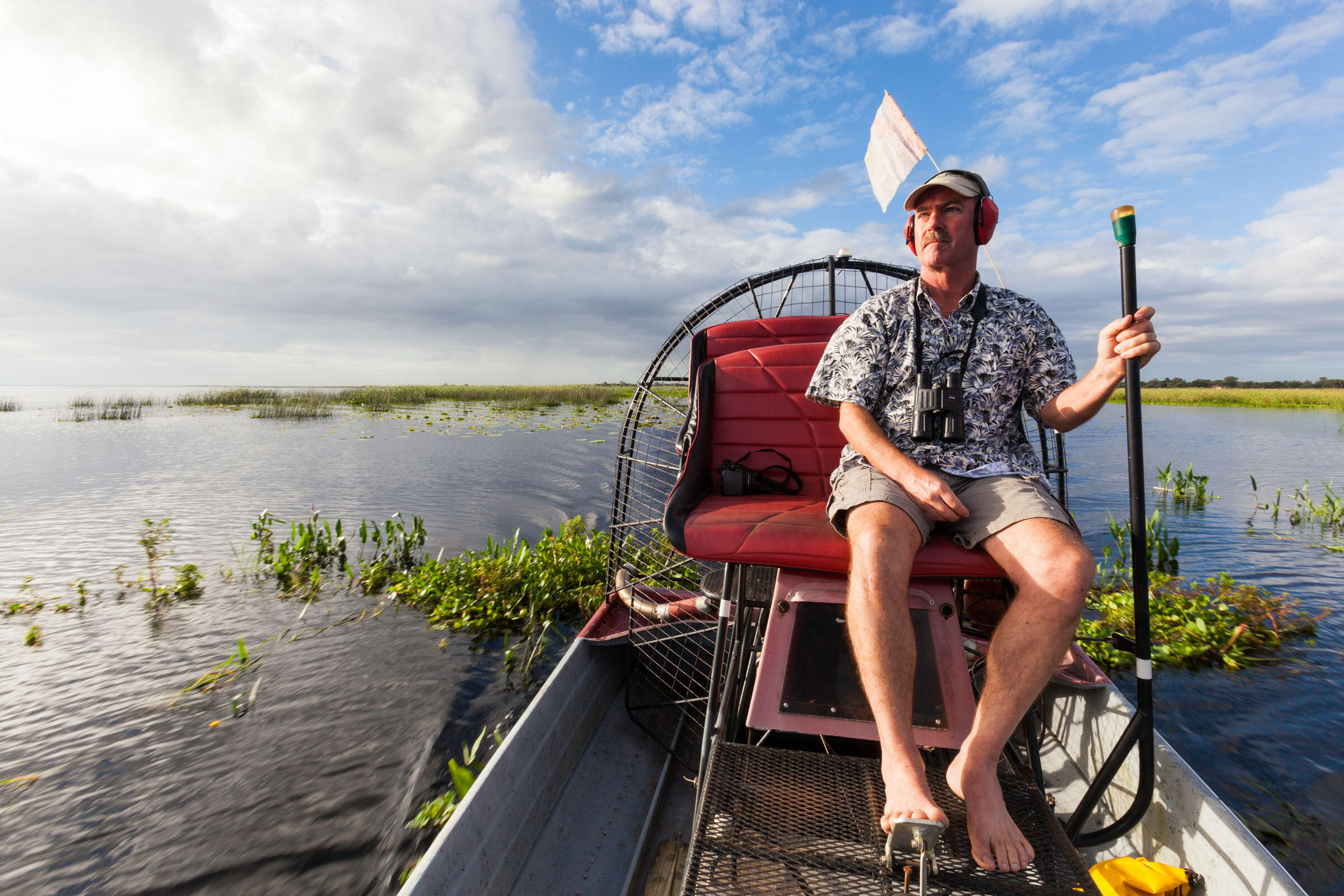 Paul Gray, of Audubon Florida’s Everglades Restoration Program, navigates Lake Okeechobee in an airboat looking for foraging and nesting snail kites. With the dense marsh habitats along the edges of the lake, airboats are the best way to navigate and monitor the birds. 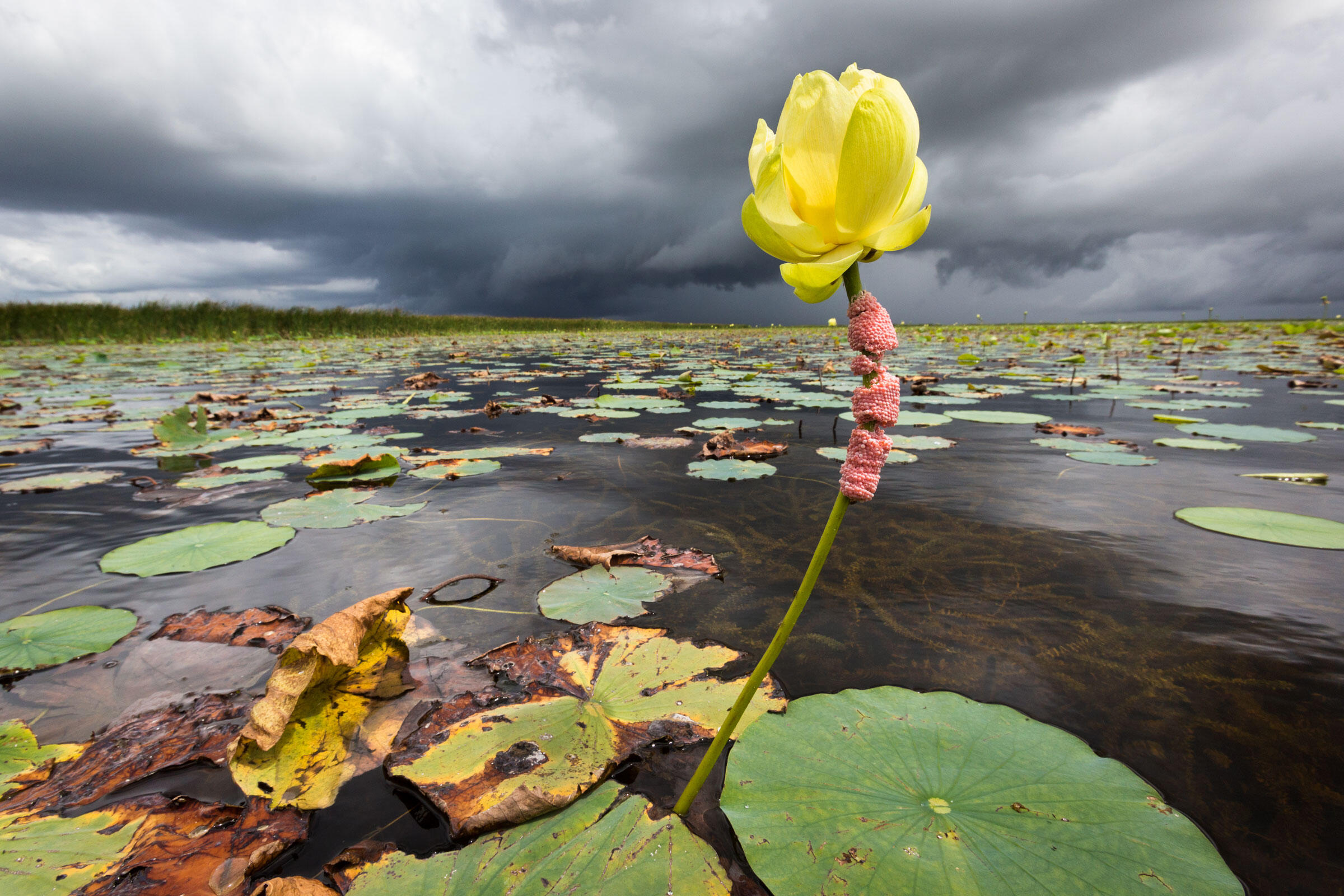 A bubble-gum pink mass of eggs from the invasive island apple snail wrap around a lotus. The abundant invasives provide a food source for an array of wildlife, from limpkins and ducks to alligators and turtles. Ecologists are keeping close watch on the new arrivals because they eat aquatic plants such as the ones in this wetland, which was restored to create kite nesting and foraging habitat. So far, monitors haven’t documented any serious effects; if they do, eradication efforts will likely involve scraping eggs into the water, where they can’t hatch. 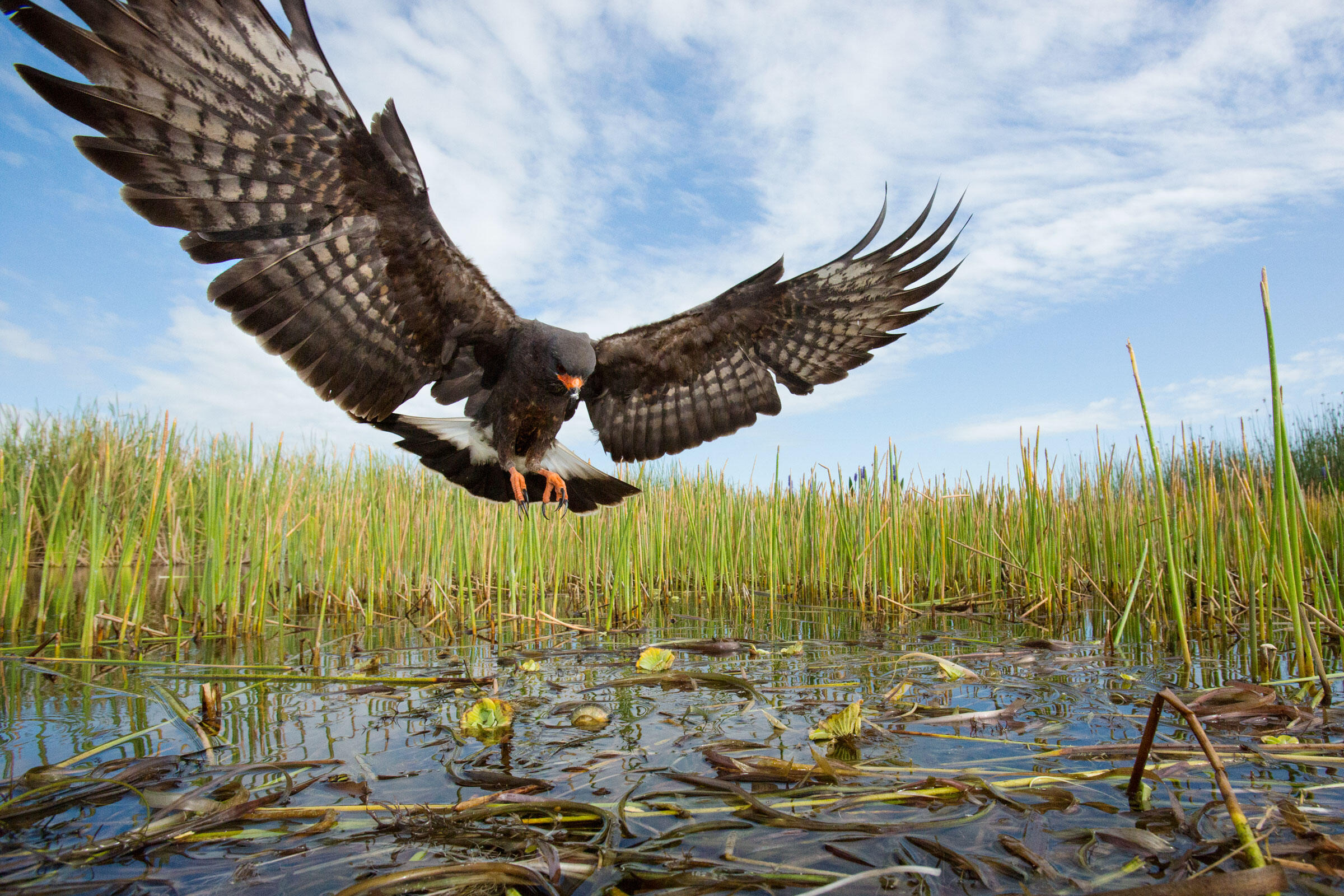 Even though Stone worked closely with biologists and dedicated day after day to capturing close-up shots of the Snail Kite's unique hunting behavior, there was no guarantee that he'd be successful in his endeavor. 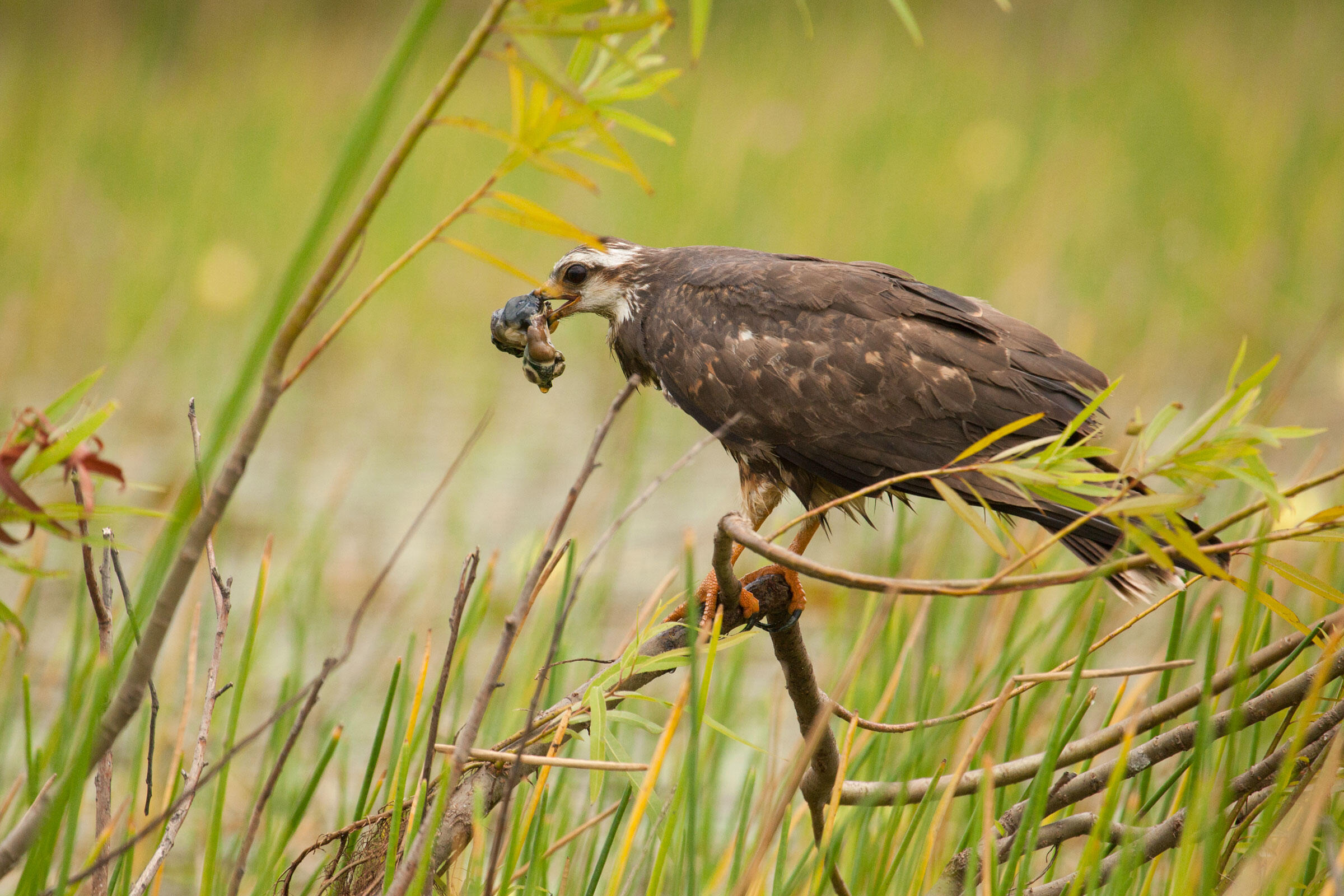 A juvenile Snail Kite pauses before devouring the freshly foraged remains of an apple snail. Biologists have noted that as the birds have rebounded, they have begun nesting and foraging in the areas the invasive snails colonize. Wherever the snails go, it seems, the kites will follow.

What's at Stake: Reviving the Everglades