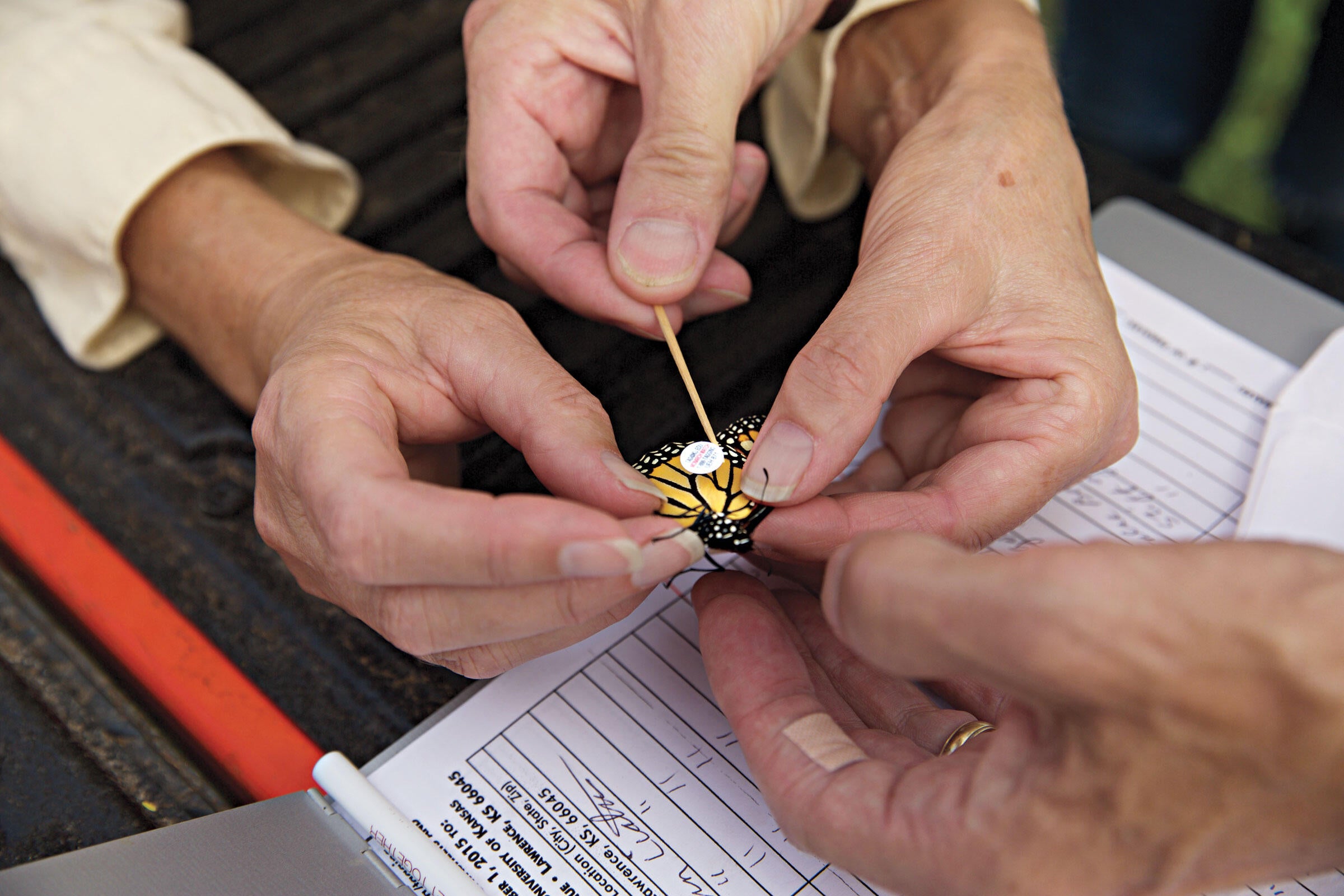 Volunteers at Goose Pond Sanctuary north of Madison, Wisconsin, gently use a toothpick to tag a monarch before releasing it for fall migration. Photo: Arlene Koziol

Why Birders Are Putting Stickers on Monarch Butterflies

Madison Audubon’s Goose Pond Sanctuary is a birder’s paradise. But when visitors roam its tall grasses in late summer, many are searching for winged wildlife with six legs—not two.

Monarch butterflies thrive in the milkweed-rich Wisconsin prairie. They arrive in spring to start to breed, and by August’s end a new generation gets ready for a more than 1,500-mile trip south to wintering grounds in Mexico. Just before the monarchs depart, however, sanctuary volunteers sweep them up with nets and affix tiny identification stickers to their wings to help track whether they survive the marathon journey.

Tagging monarchs is a delicate task, but the data it generates are sorely needed. In the past two decades, the Eastern population that overwinters in Mexico has declined by more than 80 percent, while Western monarchs are also faring poorly. In June the U.S. Fish and Wildlife Service faces a deadline to decide whether to list both under the Endangered Species Act. “That’s why we’re trying to engage in this—because their decline is so vast and at such a large scale,” says Goose Pond Sanctuary manager Mark Martin.

Last year roughly 170 people tagged 1,061 butterflies at Goose Pond. The stickers they applied are provided by Monarch Watch, a community-science project that tracks population and migration trends. Between 1998 and 2015 Monarch Watch participants throughout North America tagged almost 1.4 million butterflies, and the program now distributes about a quarter million tags each year. In Mexico locals gather stickers from dead butterflies and receive a fee for each returned.

While the Endangered Species Act decision is pending, conservationists aren’t waiting to stem the loss of native plants that’s spurred the species’ decline. In Wisconsin, for example, Madison Audubon joined a new statewide coalition that will promote planting of milkweeds to bolster breeding habitat, as well as nectar plants that supply food.

Such efforts will benefit not only butterflies but also all wildlife at Goose Pond, says Sue Foote-Martin, who manages the sanctuary with her husband. She notes the butterfly tagging has another important purpose: cultivating public awareness for conservation. “We’re not only growing habitat,” Foote-Martin says, “we’re growing interest in the plight of the monarch.”

This story originally ran in the Spring 2019 issue as “The Butterfly Effect.” To receive our print magazine, become a member by making a donation today.

A Native Plants Garden That Brings Birds, Pollinators, and Parishioners Together

The partnership between Elisha Mitchell Audubon Society and St. Eugene Catholic Church in Asheville, North Carolina, is just one example of the chapter's work in the community.

Is Wall Construction at the National Butterfly Center About to Begin?

Rumors are swirling that the government plans to seize the majority of the private sanctuary’s land today. Center staff themselves don’t know for sure.