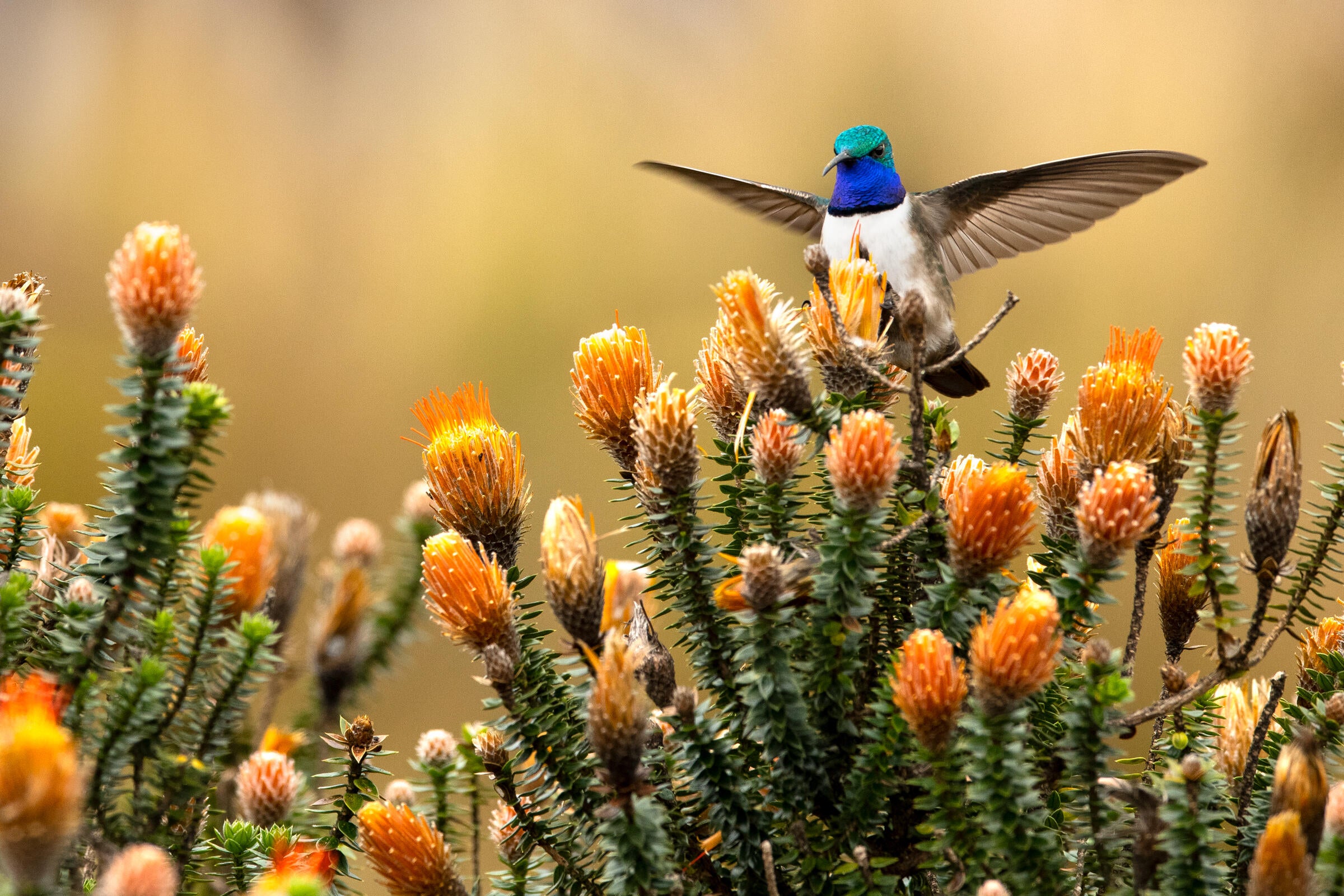 A Blue-throated Hillstar feeds on the flowers of a Chuquiraga plant in Ecuador. Photo: Murray Cooper

A New Hummingbird Was Discovered In 2017. Now There's a Race to Protect It.

With its niche habitat in Ecuador under threat, the Blue-throated Hillstar was at risk from the moment it was identified.

When ornithologist Francisco Sornoza visited Ecuador’s Cerro de Arcos in April 2017, he was hoping to find interesting birds but had no idea he would discover a new species. He had made the 15-hour drive from Quito to this windswept Andes mountain region, named for its rocky arches, to help El Oro provincial government assess the area’s potential for attracting ecotourism. After hiking for three hours, Sornoza—Pancho to his friends—and companions stopped to rest on a high, flat rocky expanse. As they chatted, a small white streak boldly darted through their group, and then settled on a nearby tree.

It was a hummingbird, Sornoza realized, and at first glance it looked like a hillstar—a group of species that are adapted to cold, high-elevation environments and live in areas to the north and south. But, he says, something was off: “Why,” he asked himself, “is a hillstar here?” He was far from their documented range, and the bird’s head was an artist-palette mix of emerald green and shimmering blue, a color mix not seen in any species he knew. He watched and waited for an hour, managing to snap two low-quality photos. Then he sent them to an Ecuadorian birding WhatsApp group and returned home to Quito.

His birding friends called him crazy; there was no way that it was a hillstar. And most avian species “discovered” in recent decades aren’t entirely new to birders or ornithologists. Instead, they are often cryptic species—the scientific term for the realization that what is thought of as a single species is really two or more, often revealed through DNA sequencing. “I didn’t want to be overly optimistic about finding a new species,” says Sornoza. But he had to know for sure, and after returning with colleagues for observations, specimens, and better photos, felt reasonably hopeful. Elisa Bonaccorso, an expert in the genetics of hillstars at the Universidad San Francisco de Quito, analyzed the group’s samples and helped confirm the hunch. In September 2018 the team ­announced and named the new bird: the Blue-throated Hillstar.

“The birds are genetically similar to other hillstars,” Bonaccorso says, “but so different in plumage that they would not recognize each other as the same species.” To her, these variations suggested that the species split apart from other hillstars relatively recently in evolutionary history—perhaps 200,000 years ago.

The discovery was exciting, but ornithologists worried. “The more we know about the ecology of the bird, the more scared we are,” Bonaccorso says. The team believes it lives exclusively in a unique high-altitude environment of shrubby grassland known as the páramo, nesting primarily in caves. They estimate, based on how few birds they saw and their niche habitat, that there are only roughly 250 of them in the world.

In other words, the new species was endangered from the moment it was discovered—and its habitat is disappearing. Local landowners routinely set fires to clear ground for cattle grazing or pine plantations, destroying both hillstar nests and their nectar sources, including Chuquiraga jussieui, a spiky orange flower that is also endangered. In addition, conservationists worry that part of its habitat overlaps with corporate mining concessions. “Open-pit mining is the next big threat,” Bonaccorso says. 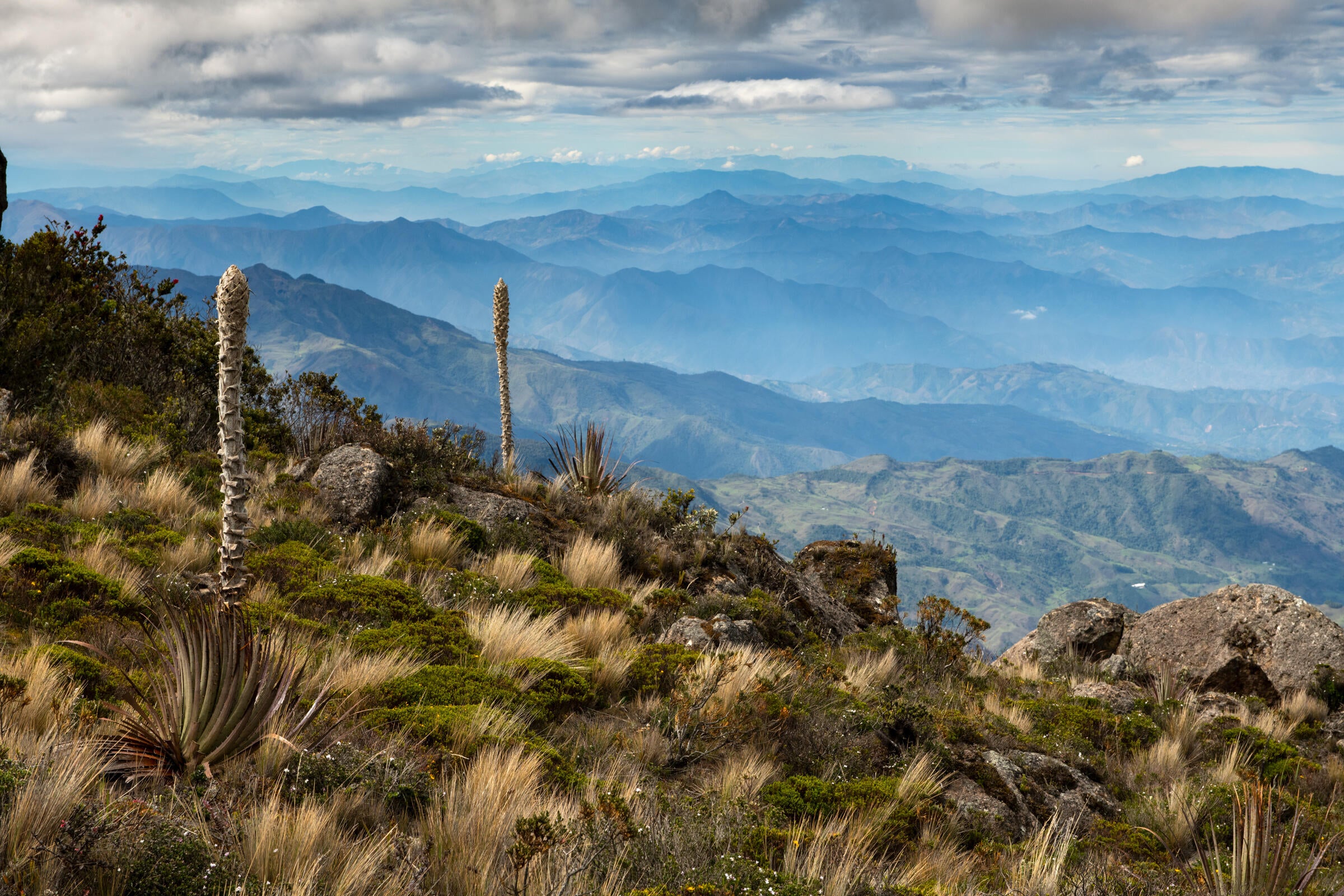 Michaël Moens, conservation director of an Ecuadorian conservation group called the Jocotoco Foundation, knew he had to act when he heard about the bird. “How many times do you see a new species?” he says. The foundation, along with the Rainforest Trust and American Bird Conservancy, quickly raised $500,000 to buy 110 acres of land in 2020 and hopes to eventually expand the reserve to 1,235 acres. Given the species’ limited range, Moens explains, this land area, though small, would help preserve existing nesting and feeding areas.

The foundation also has plans for ecological restoration, hoping to spark a cycle of rejuvenation in the ecosystem: Just as Chuquiraga feeds the Blue-throated Hillstar, the bird pollinates the plant in return, Moens says. Jocotoco has, so far, planted about 2,500 new plants in the reserve, with another 3,000 on the way.

But while the new species’ discovery has already brought birders and international attention to Cerro de Arcos, the bird still remains at great risk, says Sornoza. Much of its habitat falls within communally owned lands controlled by dozens of people, which makes expanding the reserve difficult, and fires don’t respect property lines. “I’m optimistic the bird can be saved if we all do what has to be done,” says Sornoza, “but the real work needs to be done with the local people.”

In the meantime, Bonaccorso and her colleagues are also trying to find nests in other parts of the Ecuadorian páramo. “Hillstars return to their nesting sites,” ­Bonaccorso says, “so if we protect the nesting sites, we can protect the birds.” Every week, a pair of ornithologists sets out into new areas to search. Along the way, they’re making history: Parts of these isolated, high-altitude grassland ecosystems—which are some of the fastest-changing evolutionary hotspots on the planet—­remain unsurveyed by biologists in Ecuador and may harbor biodiversity as yet unknown. “That gives us hope and a duty to save those last wild places,” Moens says, “because we depend on them eventually.

This story originally ran in the Spring 2021 issue as “Hidden Gem.”​ To receive our print magazine, become a member by making a donation today.

By their estimate, fewer than 750 Blue-throated Hillstars remain in the fragile Ecuadorian Andes.