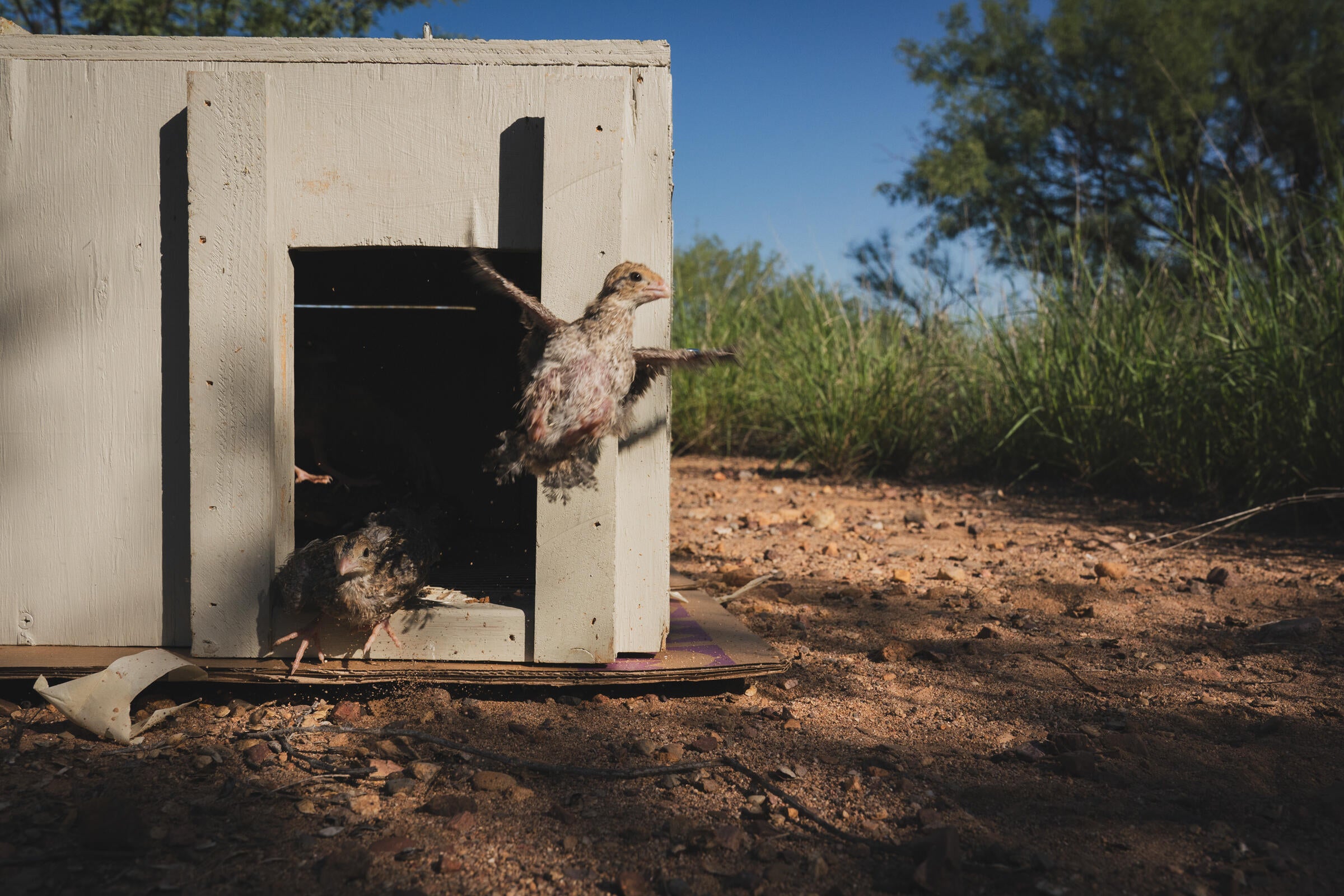 Sometimes chicks walk out of the box. Sometimes they run. Sometimes they erupt in an awkward, clumsy tumult of feathers. However it happens, these young birds are getting their first taste of freedom. Photo: Morgan Heim

Once thought extinct, the critically endangered quail faces a tough recovery but appears to be gaining a foothold in southern Arizona, where foster fathers help bobwhite chicks learn to live in the wild.

The sun scorches a stretch of Arizona desert as two women stride through clumps of golden grass, dodging prickly pear cacti on a late morning in September. Between them they carry a wooden box punctuated with round breathing holes. They set it down in an arid wash thick with mesquite trees and slide open a door on one side. Then they quietly make their way over to a small group of people on the edge of the wash and stand like silent sentinels, not wanting to frighten the rare creatures inside.

Soon about a dozen tiny, speckled chicks bumble and wobble out into the clearing. These birds, taking their first, tentative steps in their new home, are Masked Bobwhites—quail once thought extinct that are now poised to reclaim this patch of their historical range after a century-long absence.

The critically endangered bird, native to southern Arizona and northern Mexico, is the focus of a decades-long recovery effort that, after many fits and starts, is finally showing signs of promise. The chick release today is a key part of a revamped program that aims to reestablish a wild population in southern Arizona, at the Buenos Aires National Wildlife Refuge. In 1985 the government set aside more than 100,000 acres of flat plains, rolling grassland hills, and oak-lined canyons specifically to conserve the gregarious quail.

Since 2018 the recovery team has released some 1,800 chicks on the refuge, including about 700 let loose last year. A fraction have survived, and, to the delight of federal biologists, some of the survivors have reproduced. An early-2020 count put the Buenos Aires population, the world’s only known wild Masked Bobwhites, at about 200 individuals. It’s a huge milestone, says Lacrecia Johnson, the U.S. Fish and Wildlife Service biologist who leads the recovery team. “It told us that at some level these birds have what it takes.” 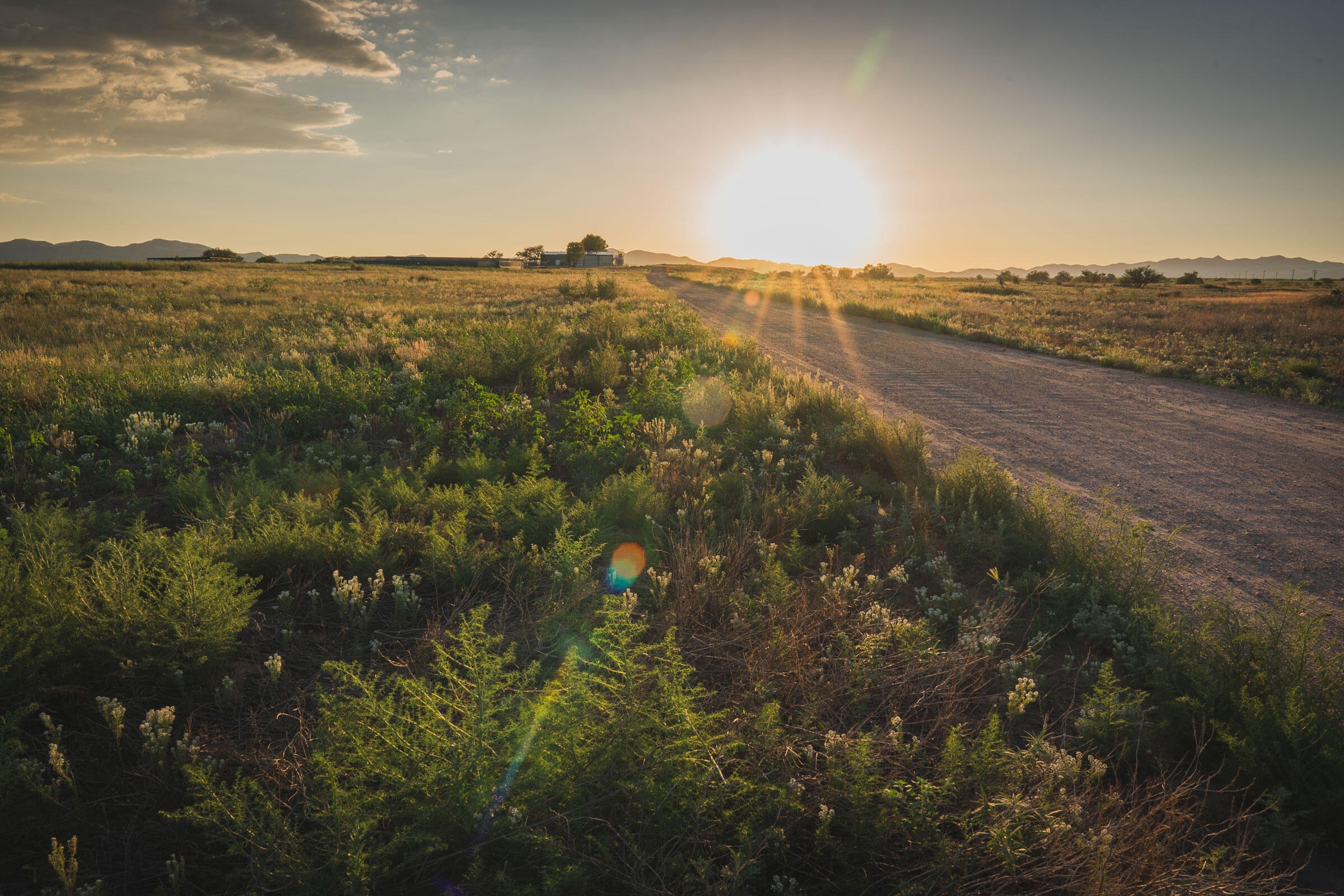 The pens that house bobwhites during the pre-release stage of the recovery effort sit in the middle of this large valley in Buenos Aires National Wildlife Refuge. Photo: Morgan Heim 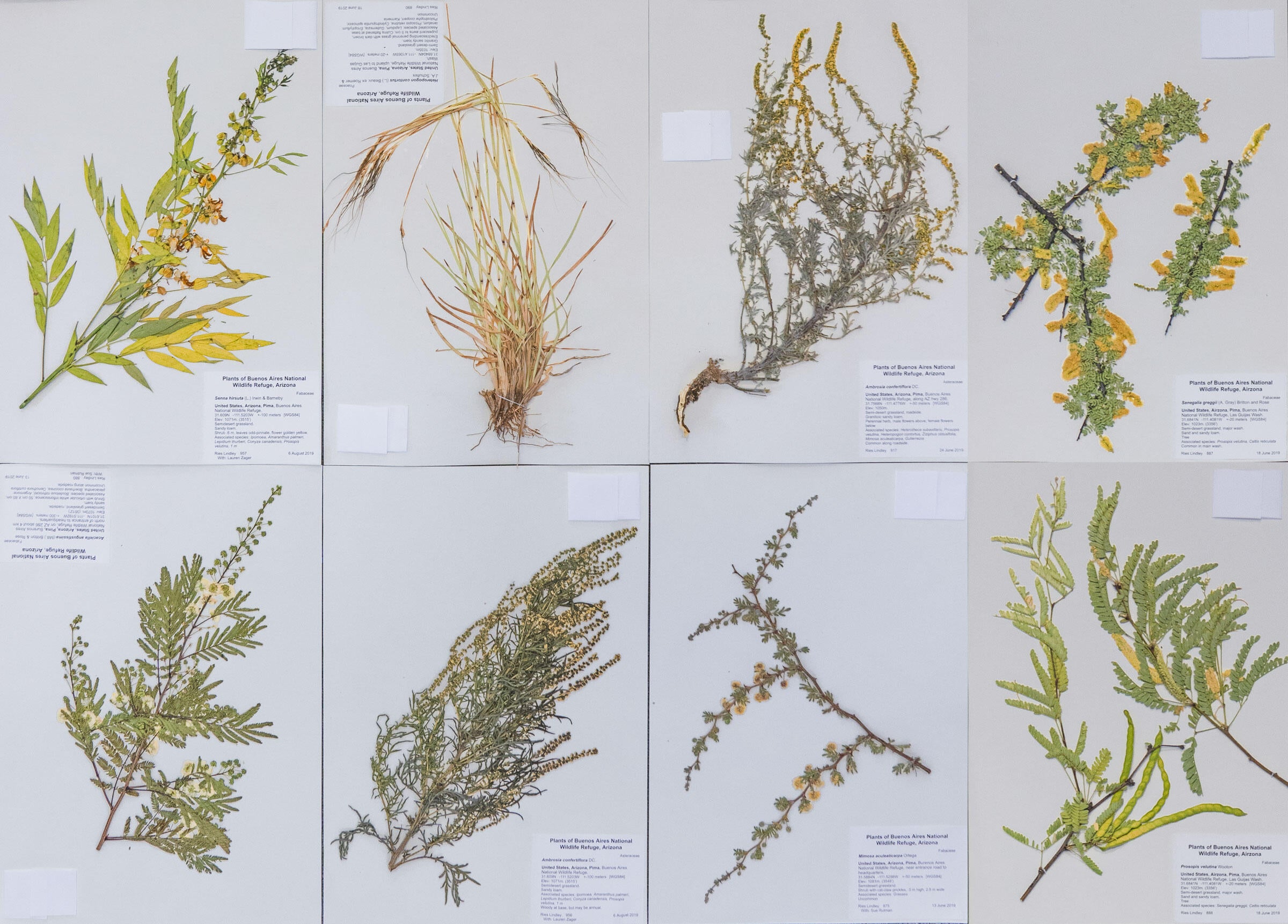 A diverse grassland is essential for Masked Bobwhite recovery. These pressings represent just a handful of the variety of plants important to the bird's survival. Photo: Morgan Heim 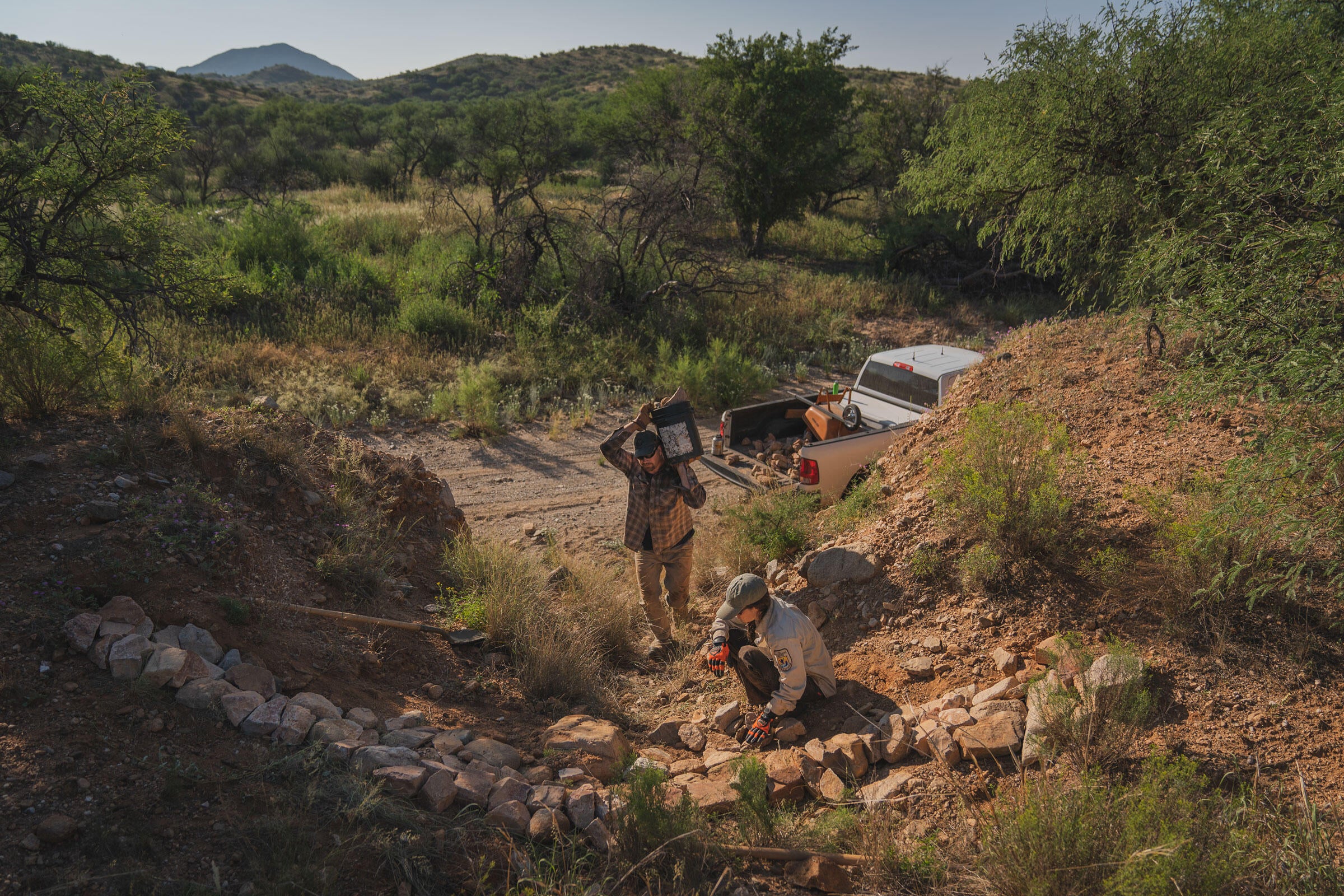 Devin Williams, left, a FWS maintenance worker, and Dawn Brown, right, a FWS wildlife refuge specialist, construct a dam to control erosion on the refuge. A history of cattle grazing, as well as fire and drought, have stripped away vegetation and made the landscape vulnerable to flash flood events. This resulting erosion can be detrimental to Masked Bobwhites. Photo: Morgan Heim Photo: Morgan Heim 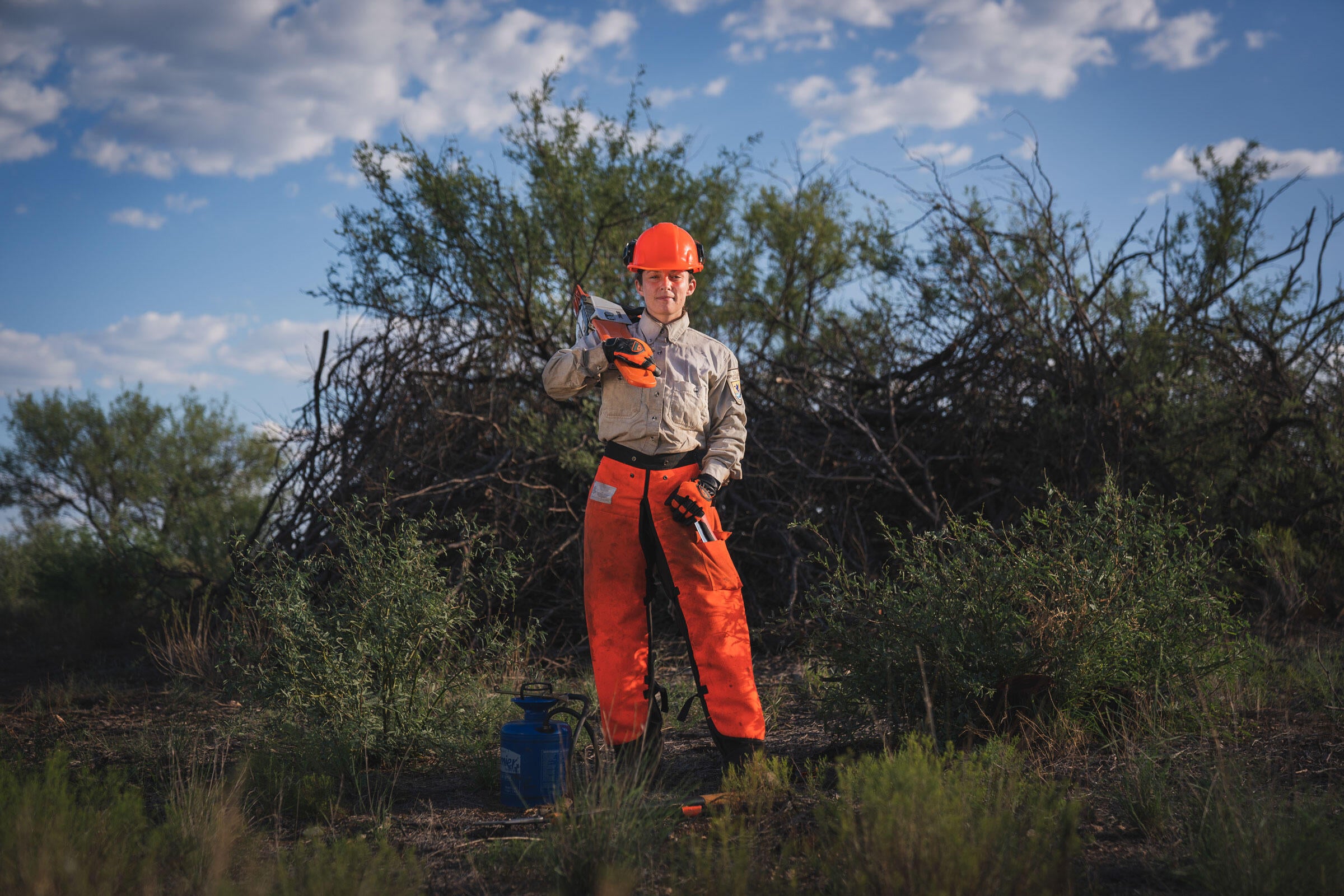 "If you want to think like a quail, put your head on the ground," Brown says. "One of the things I've been trying to do is just understand how the habitat here with what we have can be usable." One of her tasks involves creating "covey headquarters," places that provide protection such as with the half-cut mesquite behind her. Photo: Morgan Heim

Still, the team does everything it can to increase the birds’ odds of survival. The release sites, for instance, are carefully chosen, says FWS quail biologist Rebecca Chester: “We try to put them in some of the best cover and in the best shade so that once they kind of get their wits about them over the first day or two, they can start to venture out from there.” The team also sets up water containers and feeders and scatters milo and millet seeds beneath shrubs and low trees. These supplemental resources might make the difference between life and death for the birds in the wild—especially amid increasingly scant rainfall and record triple-digit temperatures.

Biologists also give the chicks a leg up by releasing them with a foster parent—often a wild Northern Bobwhite, a close relative of the Masked Bobwhite. (While the chicks don’t know the difference, Northern males have a white throat and eyebrow, whereas Masked males have a mostly black head.) These surrogate dads teach naive youngsters how to find grasshoppers, beetles, and other food sources. And they steer them under dense scrub for protection from predators like coyotes and the boiling midday sun.

The foster dad in the wash jumps right into his role. Within minutes the Northern Bobwhite has herded his wards under the canopy of twisted branches and fern-like foliage. Johnson retrieves the box, and the humans leave. The team will track the birds via the dad’s radio collar and with visual counts, monitoring from a distance. But from here on, this small brood—along with other bobwhites roaming the refuge—is on its own.

ioneering ornithologist Herbert Brown first wrote about the Masked Bobwhite in 1884. A mere two decades later, he noted its scarcity: “One of the rare, if not the rarest, native birds in Arizona today is the Masked Bob-white.” By the early 1900s it had vanished from parts of its vast Sonoran Desert home, along with the lush grasslands, degraded by drought and cattle. It was presumed extinct in the United States by the 1920s, but for a couple dozen years, conservationists, game breeders, and ornithologists occasionally still captured the elusive quail in Sonora, Mexico. They brought their quarry north, and some attempted to seed new populations in Arizona and New Mexico. Those efforts failed. By the 1950s Masked Bobwhite, classified as a subspecies of Northern Bobwhite in 1944, seemed to have disappeared entirely.

It stayed in the annals of vanished birds until the 1960s, when Jim Levy rediscovered it. He’d been captivated by birds since age six, when he’d walk with his older brother, Seymour, to a park along Lake Michigan—sometimes skipping school—to watch flocks of multihued migratory birds that rested and fed there. “I’d always been charmed by them,” he says. In 1956 the brothers moved to Arizona and started a taxidermy business. A few years later, Levy, then in his thirties, heard of sightings of the bird in Sonora from J. Stokley Ligon, a New Mexico wildlife conservationist who tried for years to restore the bobwhite. Curiosity piqued, Levy learned everything he could about the quail and then went to Sonora to search for it, first with a friend and then with Seymour, who died in 2013.

During two trips in the 1960s, he confirmed bobwhites were still hanging on in Mexico’s Benjamín Hill area, 150 miles south of Tucson. The first clue to their presence was a single quail feather that Levy spotted in a jumping cholla. “I could tell by the coloration and pattern of that feather that it was a female nest bobwhite feather,” he recalls.

On the next trip, Levy woke up one morning to a sight that remains vivid more than a half century later. He’d set up his camping cot beside a highway and slept under the open sky. “I looked down a ditch and here come a family of Masked Bobwhite walking down the ditch, right against all those tractor trailers and everything else.”

Thus began Levy’s long fascination with the elusive quail and an international effort to protect it. The rediscovery helped prompt its listing under a precursor to the Endangered Species Act in 1967, which in turn spurred FWS to embark on the bird’s recovery. In subsequent years, FWS biologists working with Mexican landowners captured a handful of wild quail and began a captive breeding program, and Buenos Aires, a former cattle ranch, ultimately was deemed the ideal place to grow a wild bobwhite population from the Mexican birds.

Biologists began releasing birds intermittently at Buenos Aires in the 1970s, without lasting success. By 2005 releases had basically ground to a halt. In part, biologists realized, poor habitat conditions meant any birds set free were likely doomed. Historically, mimosa and other large bushes peppered these grasslands, their open umbrella shape providing shelter for bobwhite and other wildlife. Drought and cattle grazing had long taken a toll, allowing encroachment of mesquite, a hardy tree that doesn’t provide cover close to the ground. The refuge lost even more vegetation essential to quail due to overuse of prescribed fires, a land management tool meant to keep the ecosystem healthy. “It was burning up the vegetation that the quail needed for winter food, for cover, thermal protection, predator avoidance,” says Johnson, who took over the recovery project in 2017. 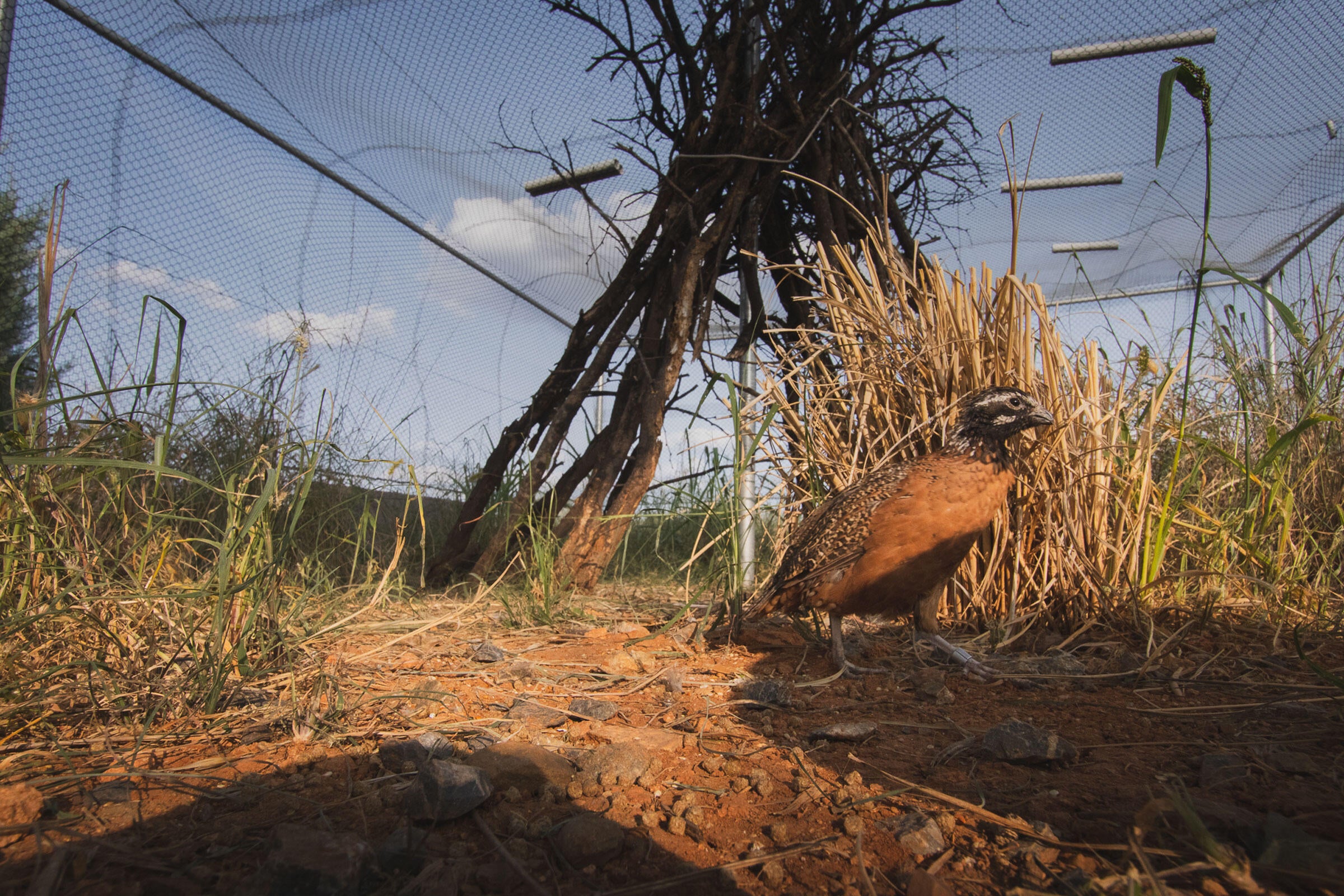 A Masked Bobwhite and soon to be a foster dad in its enclosure on the refuge. Photo: Morgan Heim 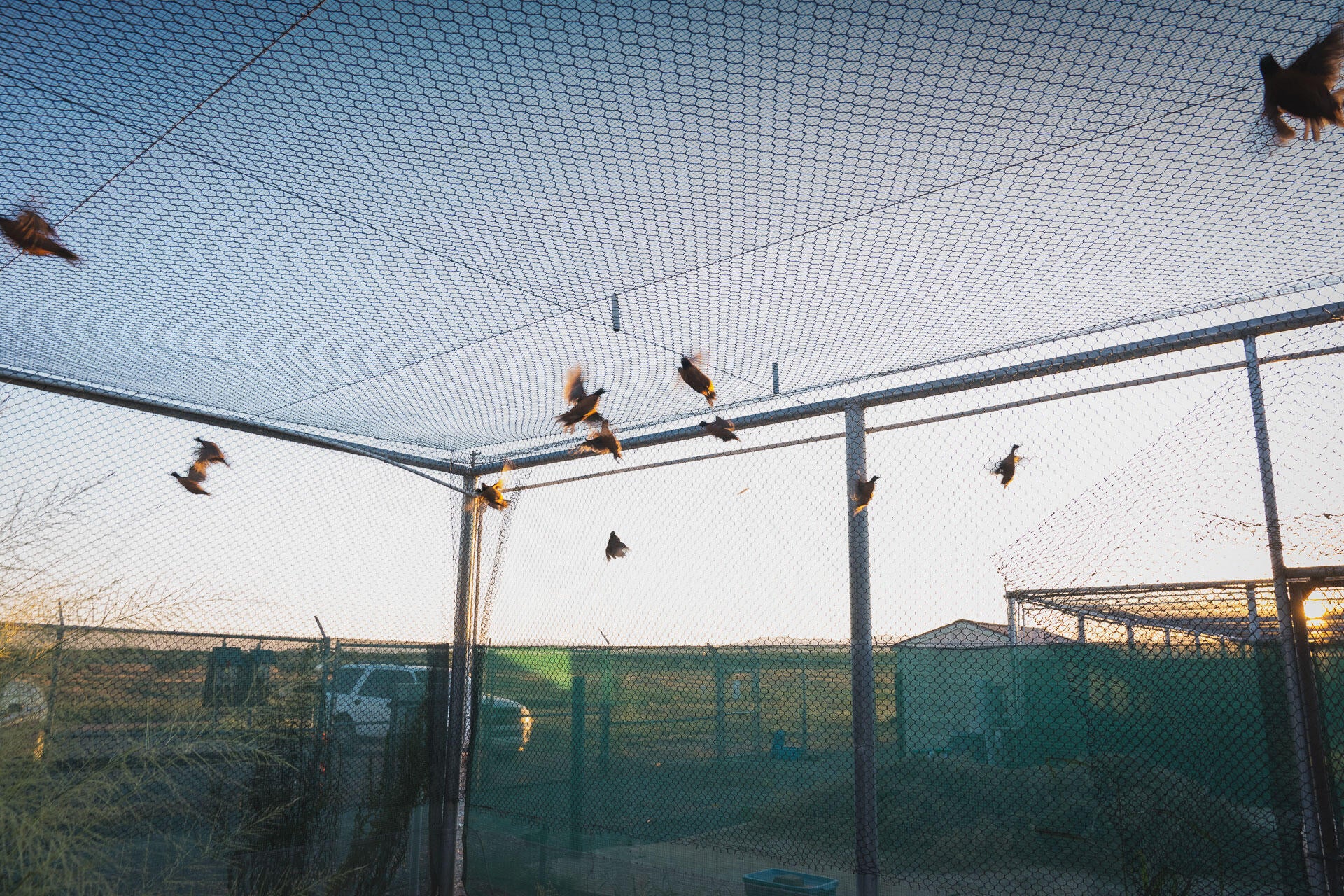 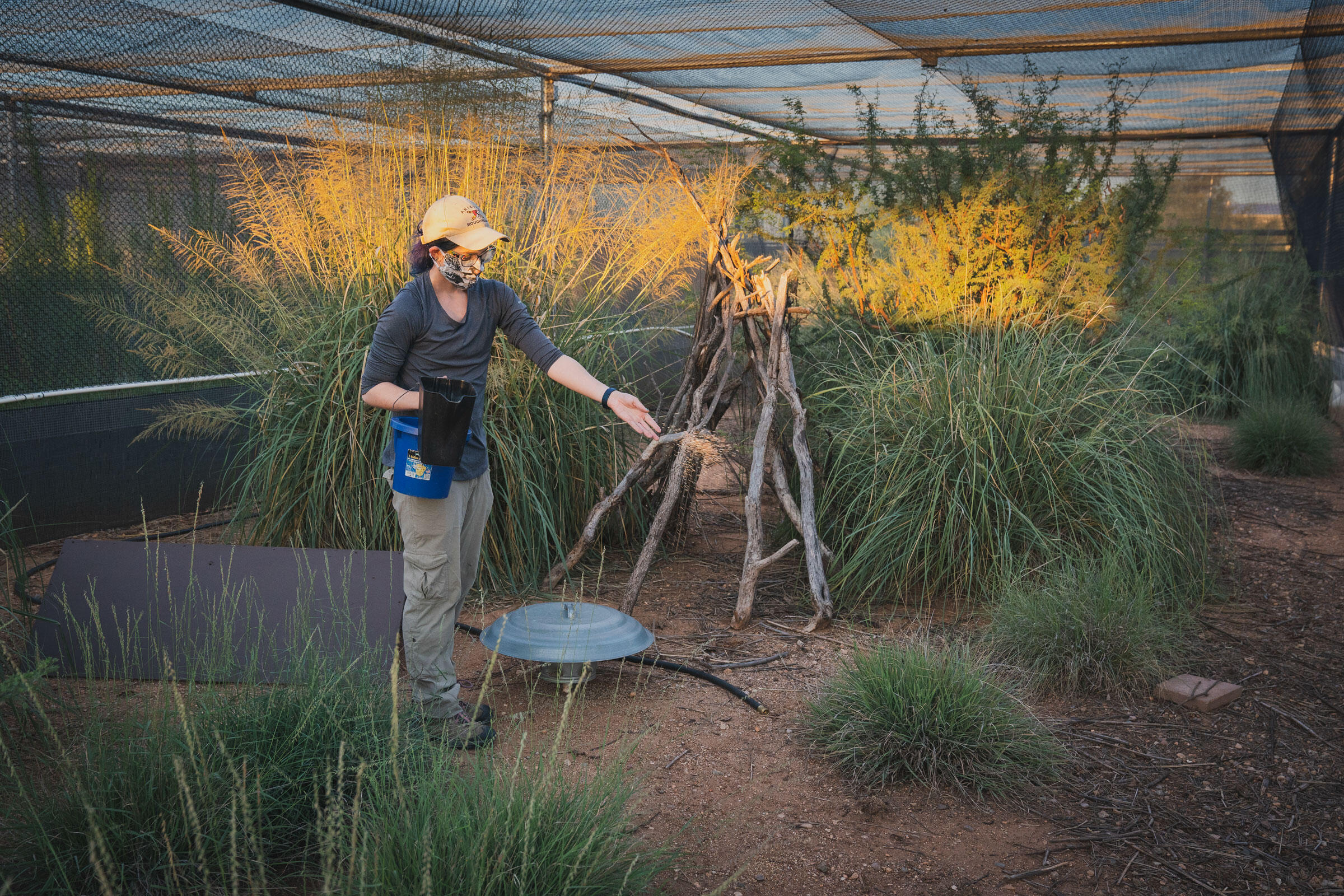 Alexandra Anderson, a quail technician with Tucson Audubon Society, does the morning rounds in the holding pens. Photo: Morgan Heim 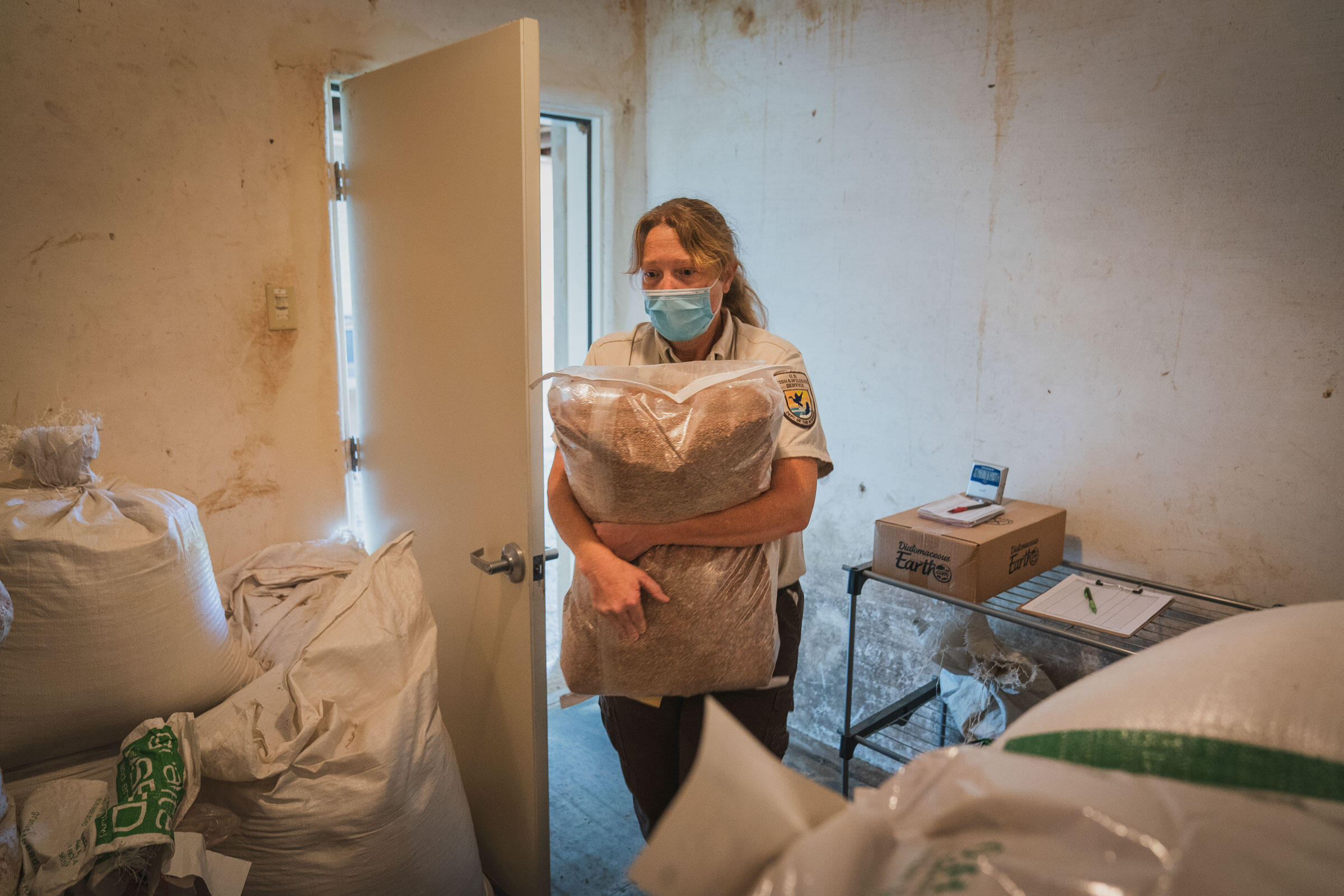 The fact that the last confirmed Mexico sighting was in 2007 created even more pressure to get the reintroductions right. Thus FWS biologists, aided by outside partners, turned their attention to restoring the ecosystem. Over the past several years, Tucson Audubon Society staffers and AmeriCorps National Civilian Community Corps volunteers have done much of that work. They’ve built erosion-control structures in washes to slow runoff, which encourages growth of dense vegetation, for instance, and partially cut and bent mesquite branches to form low, thorny covers for bobwhite. “Masked Bobwhite are endangered purely due to human impacts on the land in the last 150 years,” says Jonathan Horst, Tucson Audubon conservation and research director. “One of the most important things about being involved in the Masked Bobwhite recovery process is that it provides us the chance to make amends.”

Land stewards have restored hundreds of acres, creating conditions where Masked Bobwhite can once again successfully breed and thrive in the Arizona desert. Others, meanwhile, have been busy ensuring there are enough young birds to reestablish a self-sustaining population on the newly revitalized landscape.

hose timid chicks that took their first steps on the refuge in September started their lives about 1,000 miles away, in Oklahoma. Since 2017 the George Miksch Sutton Avian Research Center has been the hub of Masked Bobwhite captive breeding, though the refuge still maintains a small facility.

When it comes to mating, Sutton biologists let nature take its course—after some matchmaking of the 300 or so adults in their flock, built with eggs from the Buenos Aires breeding facility. Birds are paired based on genetics in early April, and hens lay eggs in mid-May, says Don Wolfe, a senior biologist at Sutton and recovery team member. Employees collect eggs daily and keep them in cool storage for up to three weeks to prevent embryos from developing. When biologists at the refuge are ready for a new batch of bobwhites, the eggs are placed in incubators and chicks hatch about three weeks later.

At first Sutton employees and volunteers drove the week-old quail to Buenos Aires in a cargo van equipped with a generator to power heat lamps that kept chicks warm. “We’d have to stop every two to two and a half hours to hydrate the chicks, give them food and water,” Wolfe says. Despite these precautions, they lost about 5 percent of the birds during the 23-hour trip. 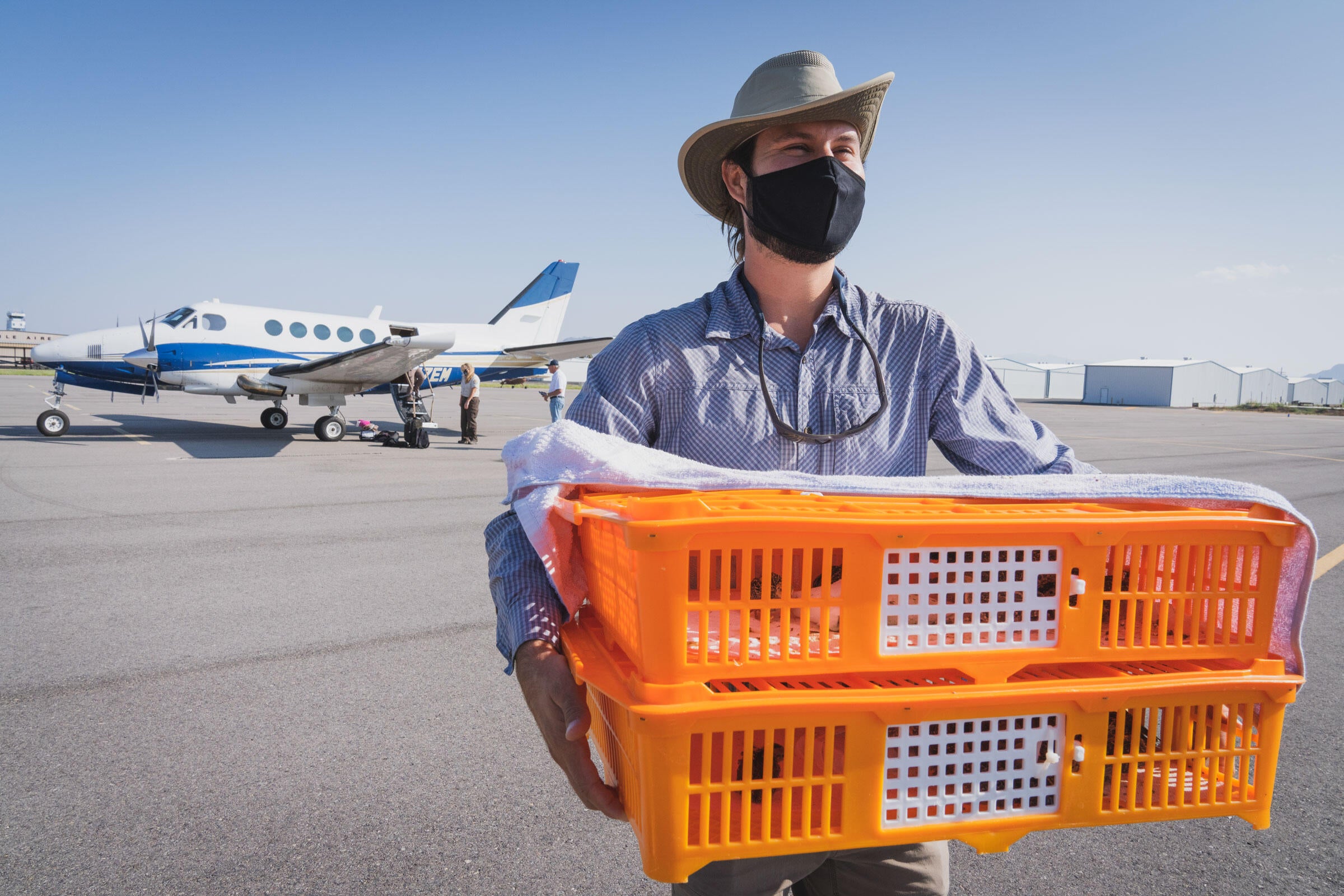 Chicks born in Oklahoma arrive at an airport near Tucson. Pilots, volunteers with the nonprofit Lighthawk, donate their planes and time to fly the chicks to their new home. Photo: M