Bird migration is one of the most fascinating and inspiring natural phenomena—but how do scientists figure out where all those birds are going?

From the earliest origins of bird banding to high-tech approaches involving genomic analysis and miniaturized transmitters, the history of bird migration research is almost as captivating as the journeys of the birds themselves. My book Flight Paths, forthcoming in 2023, will take a deep dive into the science behind these techniques and the stories of the people who developed them, but in the meantime, below you can read a selection of milestones that trace our unfolding understanding of migration.

Indigenous cultures develop a range of legends and stories about migratory birds. Athabascan peoples in Alaska, for example, tell the story of “Raven and Goose-wife,” in which Raven falls in love with a beautiful goose but cannot stay with her because he can’t keep up when the family of geese migrates south over the ocean.

While Aristotle correctly recognized some aspects of bird migration in his Historia Animalium in the 4th century, BC, he hypothesizes that swallows hibernate in crevices and that some winter and summer residents are actually the same birds in different plumages.

Inspired by Aristotle, Swedish priest Olaus Magnus suggests that swallows hibernate in the mud at the bottom of lakes and streams. This misconception will persist into the 1800s.

English minister and educator Charles Morton theorizes that birds migrate to the moon for the winter. Although this sounds ridiculous today, he correctly conjectured that birds may be spurred to move to new areas by changing weather and a lack of food and even noted that body fat might help sustain them on their journey.

John James Audubon ties silver thread to the legs of Eastern Phoebe nestlings and identifies them when they return to the same area the following spring—or, at least, so will later claim. Biologist and historian Matthew Halley cast doubt on this in 2018 when he noted that Audubon was actually in France in spring 1805 when the phoebes would have returned.

German villagers shoot down a White Stork that had a spear made of African wood impaled in its side. Dubbed the “pfeilstorch” (or “arrow stork”), this unfortunate bird provides some of the first concrete evidence of migration between continents.

Ornithologist William Earl Dodge Scott is touring the Princeton University astronomy department when he’s offered a view of the full moon through a telescope. Astonished to see migrating birds silhouetted against the face of the moon, he is able to use his observations to calculate a rough estimate of how high they must be flying.

Climbing a hill outside Madison, Wisconsin, historian and amateur ornithologist Orin Libby counts 3,800 calls by migrating birds over the course of five hours on one September night. Many of the calls seemed “almost human,” he will later write, “and it was not difficult to imagine that they expressed a whole range of emotions from anxiety and fear up to good-fellowship and joy.” These calls will eventually be dubbed “nocturnal flight calls" and be used as one way of monitoring bird migration.

Hans Christian Cornelius Mortensen places metal rings around the legs of starlings in Denmark to study their movements, the beginning of the scientific use of bird banding.

At a meeting in New York City, members of the American Ornithologists’ Union vote to form the American Bird Banding Association, the direct forerunner of today’s USGS Bird Banding Laboratory. Its mission is to oversee and coordinate bird-banding efforts at a national scale.

The U.S. Bureau of Biological Survey assumes authority over the bird banding program after the Migratory Bird Treaty Act passes in 1918. The agency's Frederick Charles Lincoln will use banding records from waterfowl to develop the concept of “migratory flyways”—four major North America flight routes around which bird conservation is still organized today.

David Lack and George Varley, biologists working for the British government, use a telescope to visually confirm that a mysterious military radar signal is being generated by a flock of gannets. It’s the first concrete proof that radar can detect flying birds, but the idea is not immediately embraced: “At one meeting,” Lack later writes, “after the physicists had again gravely explained that clouds of ions must be responsible, Varley with equal gravity accepted their view, provided that the ions were wrapped in feathers.”

Louisiana State University ornithologist George Lowery’s moon-watching observations in the Yucatan, using techniques inspired by Scott’s original full moon observations in 1880, provide evidence that some birds do indeed migrate across the Gulf of Mexico instead of taking a land route over Mexico.

George Lowery and his collaborator Bob Newman oversee a massive effort to recruit volunteers across the continent to record moon-watching observations during fall migration. “Telescopes swung into operation at more than 300 localities as people by the thousands took up the new form of bird study,” writes Newman. “By the end of the season, reports had been received from every state in the United States and all but one of the provinces of Canada.” Due to the difficulties in analyzing such large amounts of data without computers, Lowery and Newman will not publish the full results until 1966. Their work provides the first continent-wide snapshot of migration patterns.

Richard Graber tags a migrating Gray-cheeked Thrush in Illinois with a miniature radio transmitter developed by Bill Cochran. That night, he follows it for 400 miles in an airplane as it continues its migratory journey. “Each of us, at times, must stand in awe of mankind, of what we have become, what we can do,” Graber will write in Audubon. “The space flights, the close-up lunar photographs, the walks in space—all somehow stagger our imagination. I was thinking about this as I flew south from Northern Wisconsin [the next morning], having just witnessed an achievement of another kind by another species.” 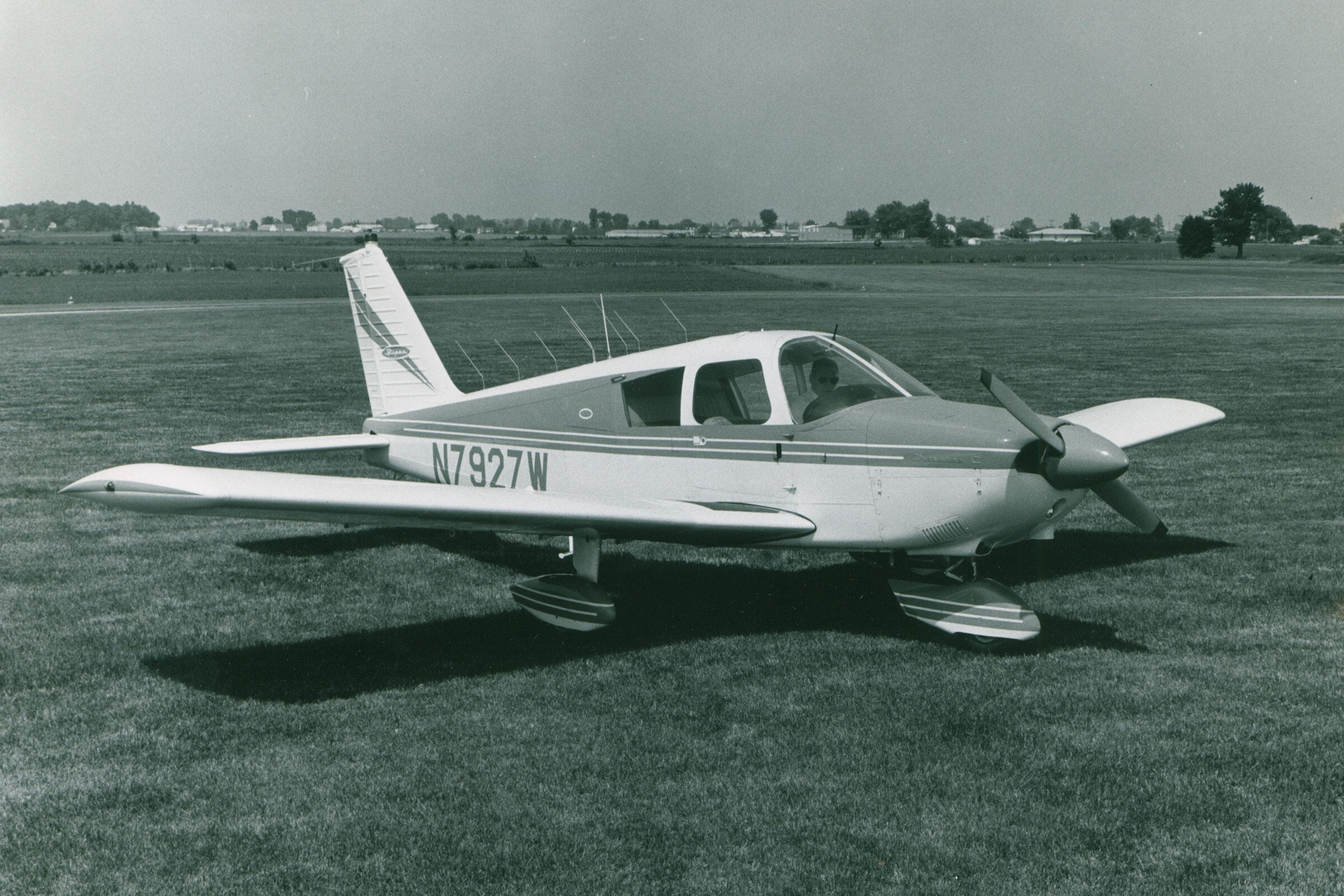 The Piper Cherokee 180 aircraft that Graber used for his observing flights in 1965. Photo: Credit: W. D. Zehr/Courtesy of the Prairie Research Institute at the University of Illinois at Urbana-Champaign. 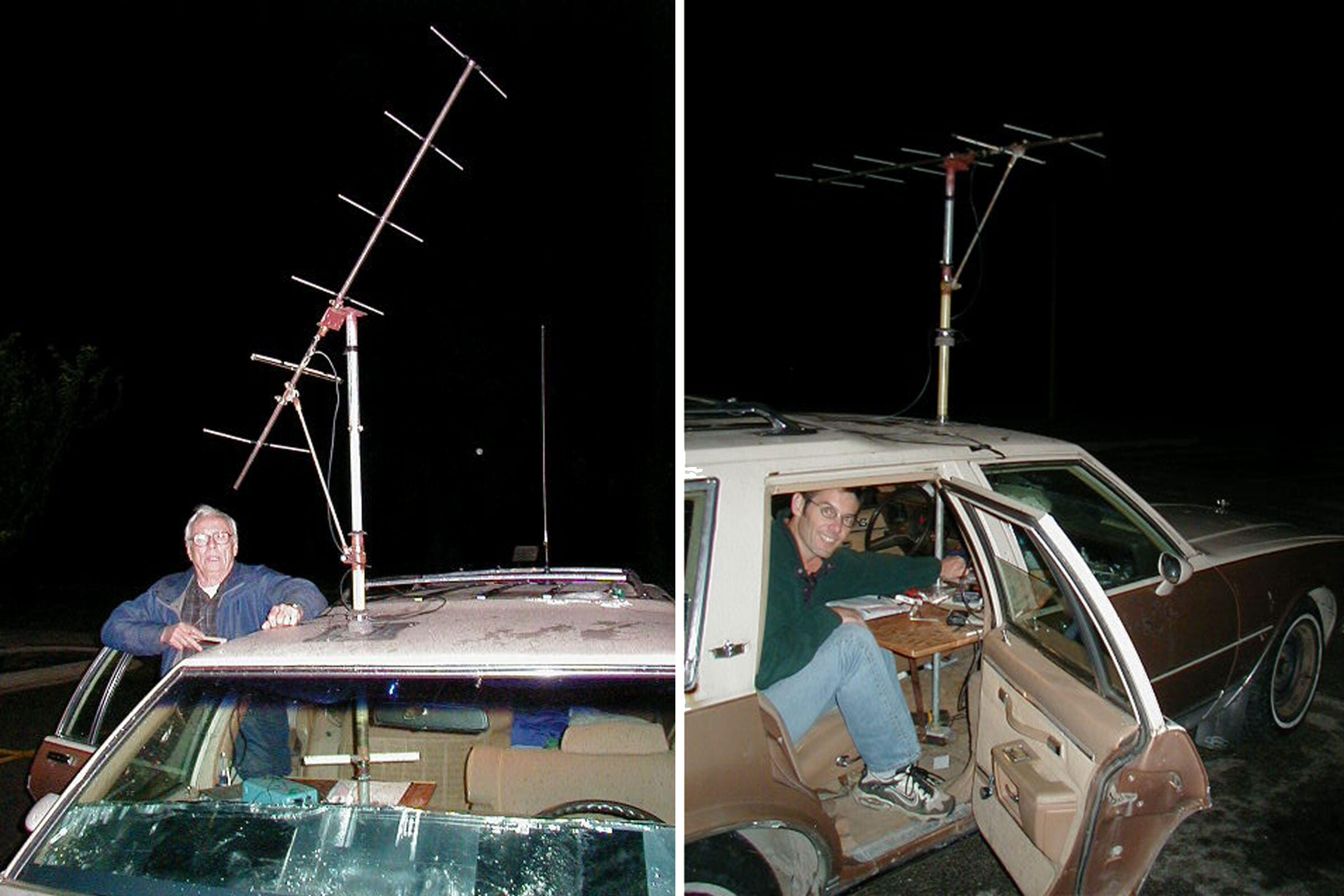 Bill Cochran and Martin Wikelski in a modified station wagon with a radio receiver. In 1973, Cochran tracked a radio-tagged migrating Swainson’s Thrush for 930 miles. Photo: Photos: Courtesy of Martin Wikelski

Bill Cochran tracks a radio-tagged Swainson’s Thrush for 930 miles on its migration, following it from Illinois to Manitoba over the course of a week in a modified station wagon with a radio receiver sticking out of the top.

Johns Hopkins University's Applied Physics Lab carries out the first field tests of satellite transmitters on birds using the Argos satellite system—launched in 1978 for the purpose of tracking oceanic and atmospheric data. Swans and eagles are early subjects.

British seabird biologist Rory Wilson tracks the movements of foraging penguins using a device of his own invention that he calls a Global Location Sensor. It uses ancient navigation principles to calculate and record a bird’s location using only a tiny light sensor and clock. These devices will later be better known as light-level geolocators.

Canadian scientist Keith Hobson and his colleagues publish a paper demonstrating that it’s possible to determine where a migrating songbird originated by analyzing the amount of deuterium—a rare isotope of hydrogen that occurs in varying amounts across the landscape—in its feathers.

“Selective availability,” a U.S. government practice which intentionally limits the accuracy of GPS technology available for non-military use, is switched off. Ornithologists quickly begin creating GPS devices for tracking the movements of birds.

The Cornell Lab of Ornithology launches eBird, a community science platform that lets birdwatchers upload records of what they observe to a database that is accessible to ornithologists, ecologists, and other researchers. Today more than one billion sightings have been contributed from around the world.

A satellite transmitter implanted in a Bar-tailed Godwit dubbed “E7” tracks the bird’s astonishing nonstop 7,000-mile migration from Alaska to New Zealand over the open water of the Pacific Ocean—“the equivalent,” according to a USGS press release, “of making a roundtrip flight between New York and San Francisco, and then flying back again to San Francisco without ever touching down.”

Ornithologists Kristen Ruegg and Tom Smith launch the Bird Genoscape Project, an effort to map genetic diversity across the ranges of 100 migratory species. It will enable ornithologists to identify where in North America a migrating bird came from by analyzing its DNA.

The Cornell Lab of Ornithology scientists kick off the second iteration of BirdCast, a project that uses weather radar data to predict nights of especially intense bird migration activity. (The original BirdCast, started in 2000 by Sidney Gauthreaux, was discontinued after a year due to the limits of the technology available at the time.) One major result of the project is initiatives that encourage cities to shut off disruptive nighttime lighting when large numbers of migrating birds are likely to be on the wing.

The Motus Wildlife Tracking System, which uses miniature radio transmitters and an automated network of ground-based receiver towers, is launched in Canada. More than 30,000 animals (mostly birds) will be tracked by the system in the next decade.

Light-level geolocators confirm long-held suspicions that Blackpoll Warblers, songbirds that weigh roughly the same as a ballpoint pen, make a nonstop 1,400-mile, three-day flight over the eastern Atlantic Ocean during their fall migration from New England to South America.

Icarus, a new space-based wildlife tracking system with receivers on the International Space Station, begins operations. The initiative's overseers aim to provide transmitters that are lighter, lower-cost, and provide better-quality data than any trackers used before.

This piece originally ran in the Spring 2022 issue as “A Brief History of Discovery.” To receive our print magazine, become a member by making a donation today.