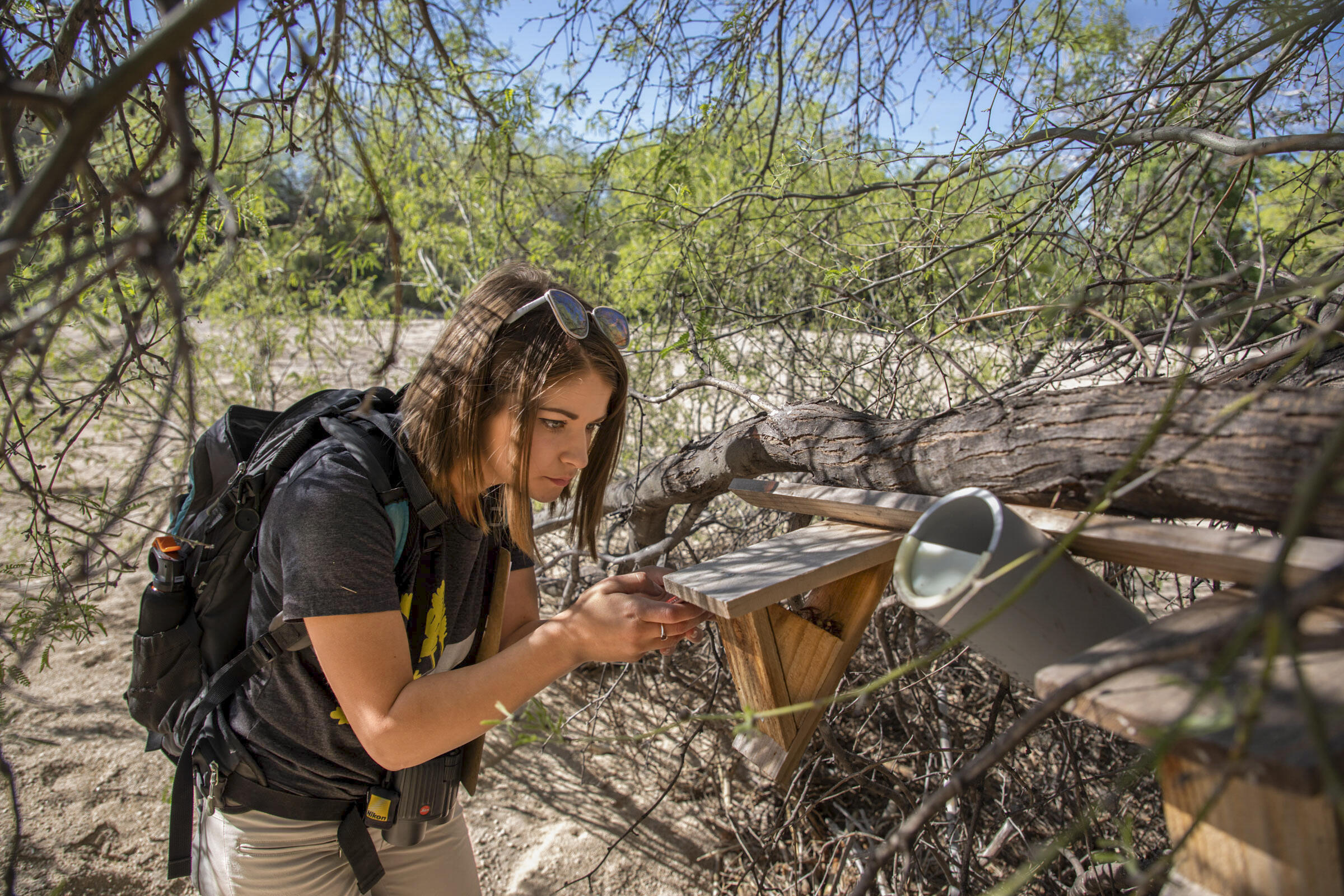 Arizonans Are Helping a Desert Warbler Expand Its Housing Options

A DIY nest box program run by Tucson Audubon provides new living quarters for Lucy's Warblers. The key, though, is to land the perfect shape.

The perky sounds of male Lucy’s Warblers echo through the Tanque Verde Wash in Tucson’s east side. It’s mid-April, and the birds have just migrated from Northern Mexico to breed and raise their families in the dripping Arizona canyonlands. This morning, there are at least two of the small, gray-plumed males singing and flying from branch to branch on the cottonwood trees. Their partners are nearby as well, maybe tucked inside the nest boxes recently installed by the Tucson Audubon Society.

Olya Phillips, the chapter’s citizen science coordinator, is here to document the number of nesting Lucy’s and keep track of the eggs they’ve laid. The team’s research on the birds has been ongoing for five years, focusing on how human-made habitat might benefit the local population. In the past, Lucy’s Warblers were largely ignored, Phillips says, largely because they were thought to be a desert-only species. But when Tucson Audubon heard stories of them popping up in peoples’ yards, the staff decided to launch the first-ever nest box program for the bird.

Since 2014, Tucson Audubon has enlisted dozens of elementary school kids and other volunteers every spring to build and install the contraptions around Arizona. The aim isn’t to reverse decline, but rather to prop up the birds long before they land in crisis. Part of that includes rolling survey data into a larger conservation strategy for the warblers. “We’re in the heart of their breeding range. There should be a plan so that we can help them in the future,” Phillips says.

Lucy’s are one of just two U.S. warbler species that lay their eggs in cavities (the other is the eastern Prothonotary). They typically hole up in mature mesquite trees across the Sonoran Desert. But as the region’s water table declines, the trees are dying. What’s more, wood harvesters cut mesquite down, and because young trees encroach on grasslands and other grazing areas, so does the state.“The one thing that Lucy’s need is being aggressively fought in many areas,” says Jonathan Horst, Tucson Audubon’s conservation and research director.

From left: Phillips shows a Lucy's nest she documented along the Tanque Verde Wash; she and the rest of the Tucson Audubon staff and volunteers keep detailed notes on active nests, including site number, type of nest box, and number of eggs. Photos: Luke Franke/Audubon

Fewer nesting trees might mean fewer warblers in the future. To keep the local population from slumping, Horst and Tucson Audubon did something that no one else had succeeded at: They devised a nest box that would bring the picky species to urban yards or conservation areas like the Tanque Verde Wash.

The process involved a lot of trial and error, Phillips says. In the first year, the team mimicked classic nest-box blueprints, but none of the rectangular residences attracted Lucy’s Warblers. They then used measurements from natural cavities to land on a 10-inch-high, triangle-shaped cubby with an entrance on each side, allowing for better ventilation in scorching summer conditions. The new design made all the difference. 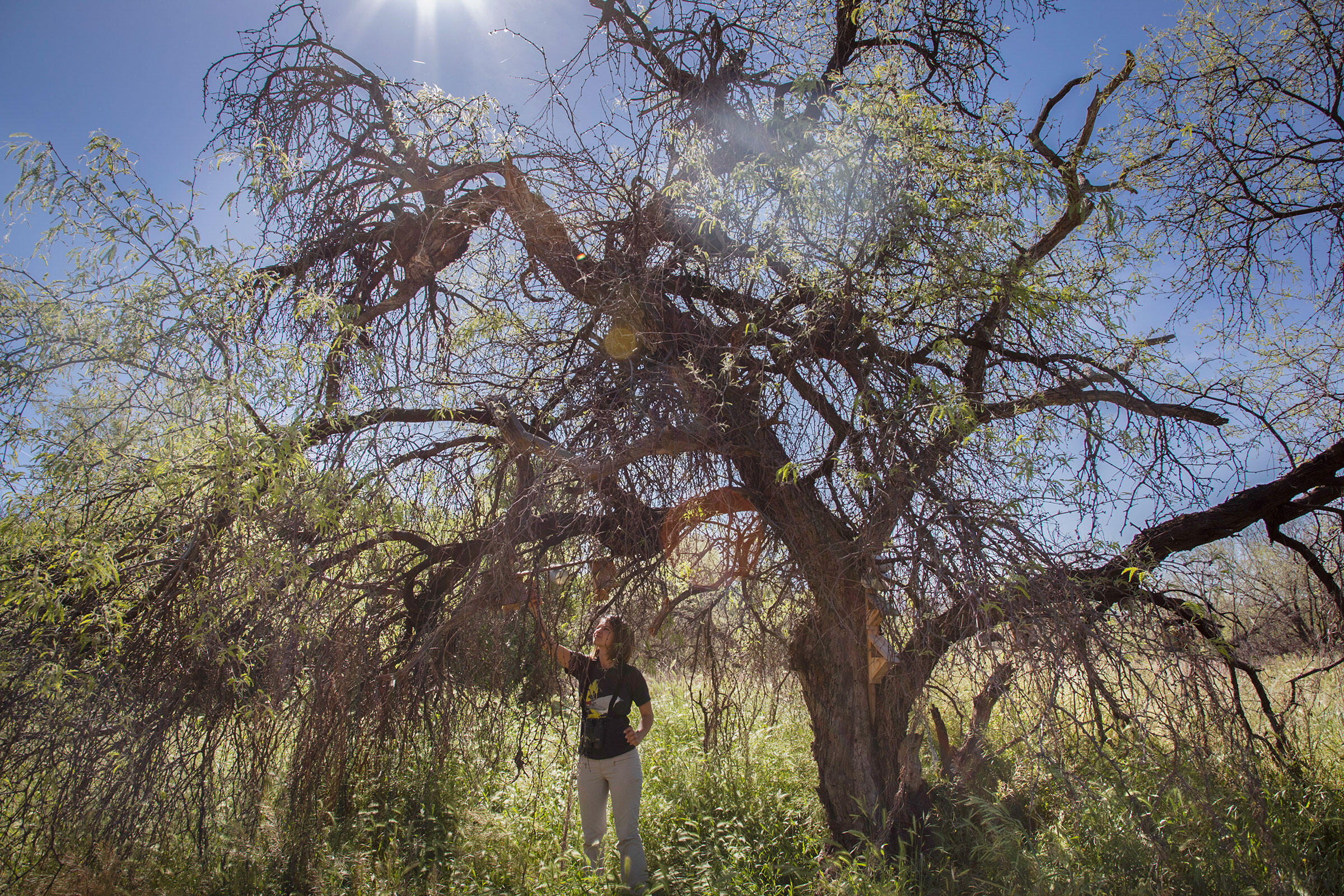 Searching for new nests among the cottonwood trees. The number of occupied boxes have been steadily increasing since the program began in 2014. Photo: Luke Franke/Audubon

Last year volunteers set up 1,400 boxes across half the length of the state, from as far north as the Tonto National Monument to as far south as Nogales. After testing the triangular layout against four other shapes, the team discovered that the occupancy rate hit 75 pecent. They also counted close to 200 Lucy’s fledglings from all the boxes.

Perhaps some of the most enthusiastic builders are the fourth-grade students of Manzo Elementary School, located in Tucson’s historic Barrio Hollywood neighborhood. On a sunny afternoon, six of them sit around a picnic table, attentively listening to Phillips and Horst’s directions on how to assemble the boxes and gleaning fun facts about the warblers.

“The more opportunities we can give kids to be exposed to nature and understand natural processes—in this case bird nesting—the better the overall education is,” says Blue Baldwin, an educator at Manzo. “If we want students who care about the Earth and the environment, they need to understand both.”

For Horst, it’s especially important to reach out to kids to establish a community that can support long-term stewardship efforts. He remembers the impression the Eastern Bluebird boxes on his grandparents’ farm in Virginia had on him growing up. Though his family didn’t know it at the time, the foot-tall nesting condos, hosted in yards throughout the species’ range, would propel its comeback in the 1970s and ’80s. That, to Horst, was proof that conservation starts at home. Someday for a new generation of Arizonans, Lucy’s Warblers might set the same example.

Correction: Arizonian was updated to Arizonan, the more accepted term, throughout the story.

This story originally ran in the Summer 2019 issue as “We Love Lucy’s Warbler​s.” To receive our print magazine, become a member by making a donation today.