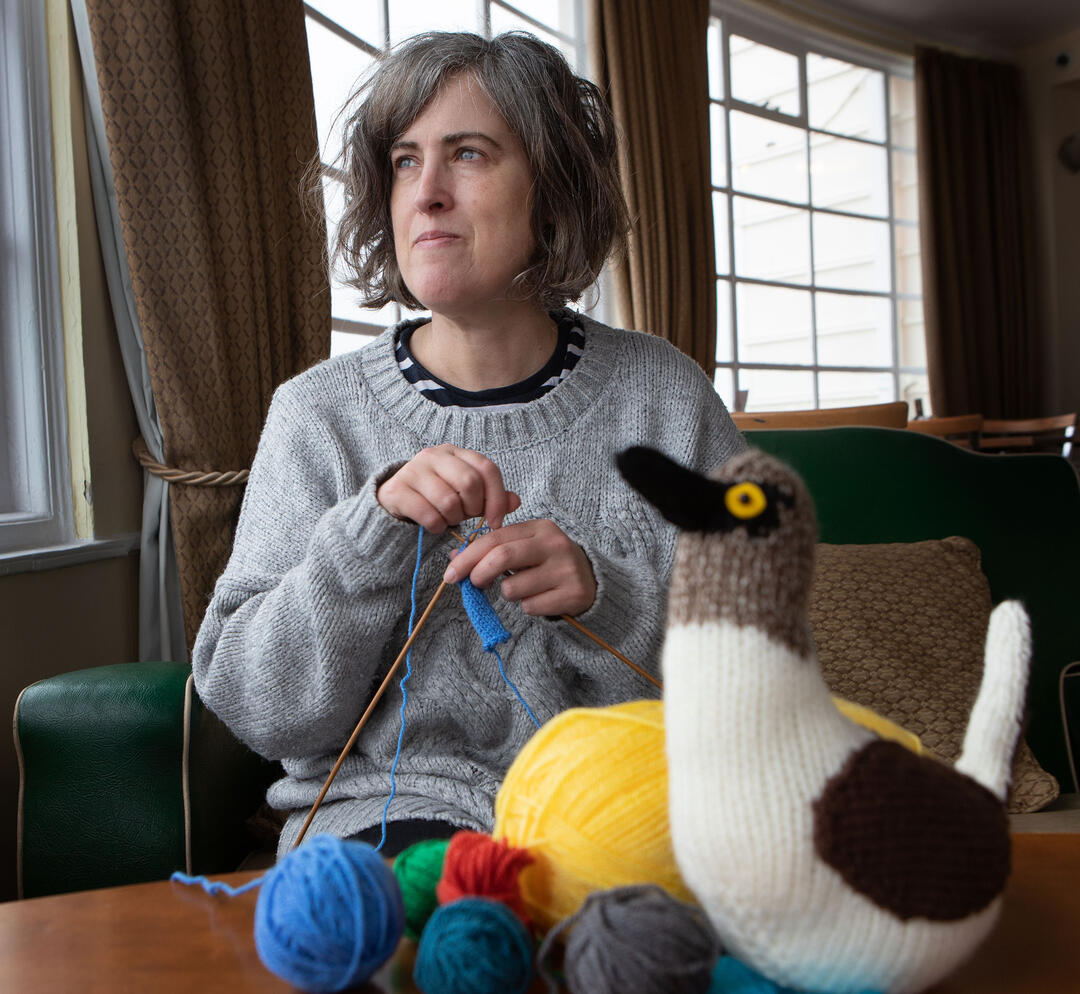 Most birders pick up a pair of binoculars to appreciate an avocet or raven. Nicky Fijalkowska takes a different tack: She grabs a pair of needles and a ball of yarn. The United Kingdom-based knitting designer has a knack for turning endless strands of wool into mini replicas of birds. The members of her growing aviary include puffins and owls, and they owe their finely stitched field marks to a lifelong obsession. Growing up, Fijalkowska would sketch birds in her parents’ garden and take trips with the Young Ornithologists’ Club.

Knitting, on the other hand, didn’t come so naturally. “I tried it as a teenager, but I always made clothes that never fitted and I ended up hating,” Fijalkowska says. She didn’t pick up her needles again until her late 30s, after swine flu and post-viral fatigue kept her bedridden for a year. “Some days I didn’t have the energy to do anything,” she says. “But I taught myself to knit and was able to build things up.”

Before long Fijalkowska’s new pastime grew into a second career. She launched her Etsy shop in 2010 and published a book of avian designs in 2015. Her crafting abilities expanded with years of practice and field observations, but she still strives for simplicity. “I want to make bird patterns for almost anyone with minimal knitting skills,” she says.

The accessibility of her creations—and, yes, the cuteness, including special names for each—also makes them effective ambassadors for conservation. Last year the Royal Society for the Protection of Birds (RSPB) asked Fijalkowska to create a knitting pattern to raise awareness for a curlew recovery program; since 1995, the birds’ U.K. numbers have dropped by up to 55 percent, largely due to loss of bogs and grasslands.

After scoring a hit with “Wendy the Whaap” (as curlews are known in Scotland), Fijalkowska crafted a spokes-bird for the Dyfi Osprey Project, an initiative that protects breeding fishing hawks in Wales. And this January, ads for the Big Garden Birdwatch, a nationwide community-science project, featured her and her knits.

With a to-do list of 50 species and counting, the expert knitter has no plans to slow down. And while the patterns help draw attention to birds, they can also have real health benefits for people, Fijalkowska says. “Knitting is very therapeutic,” she explains. “It’s a great way of switching off your mind and focusing on the sensation of yarn in your hands and a simple act of creation.”

For those who want to try their hand at knitting, Fijalkowska recommends her Pied Avocet pattern (which you can download for free at the bottom of the story). The distinctive black and white wading bird fell victim to Victorian hunters and egg collectors in the mid-19th century and nearly vanished from the British landscape. Following World War II, however, the species made a triumphant return to the beaches of East Anglia, which had been closed and flooded as a defense against invasion. The conservation success earned the bird its emblematic status as the logo for the RSPB.

From an aesthetic point of view, “the avocet is one of the most easily recognizable wading birds, with its striking plumage, long legs, and curved beak,” Fijalkowska says. “I wanted to capture a little of its elegance and poise.”

But those long legs also make the Pied Avocet the most challenging pattern in Knitted Birds, Fijalkowska explains. The body itself involves only simple stitches and should be straightforward for beginner to intermediate knitters—but once you reach the legs, the needlework gets tricky. “It's important to make plenty of supporting stitches at the top of the legs where they enter the body,” the designer says. “This stiffens the fabric and gives the bird more stability.”

For the avocet to stay upright, you’ll need to glue it to a sturdy plank or a piece of driftwood (when opting for the latter, make sure the driftwood is thoroughly dry; otherwise the glue won’t stick). “If you follow the instructions and you can't get the avocet to stand, try gently bending a leg by a couple of millimeters,” Fijalkowska suggests. “Often a few small adjustments are all it needs to balance.”

The finished product holds a special place in Fijalkowska’s heart: While there are countless knitting patterns available for common garden birds, she says, very few exist for wading species. So, time to go ahead and get the yarn ball rolling.

This story originally ran in the Summer 2019 issue as “Moving the Needle.” To receive our print magazine, become a member by making a donation today.

Birds Star In One of This Year's Hottest Board Games