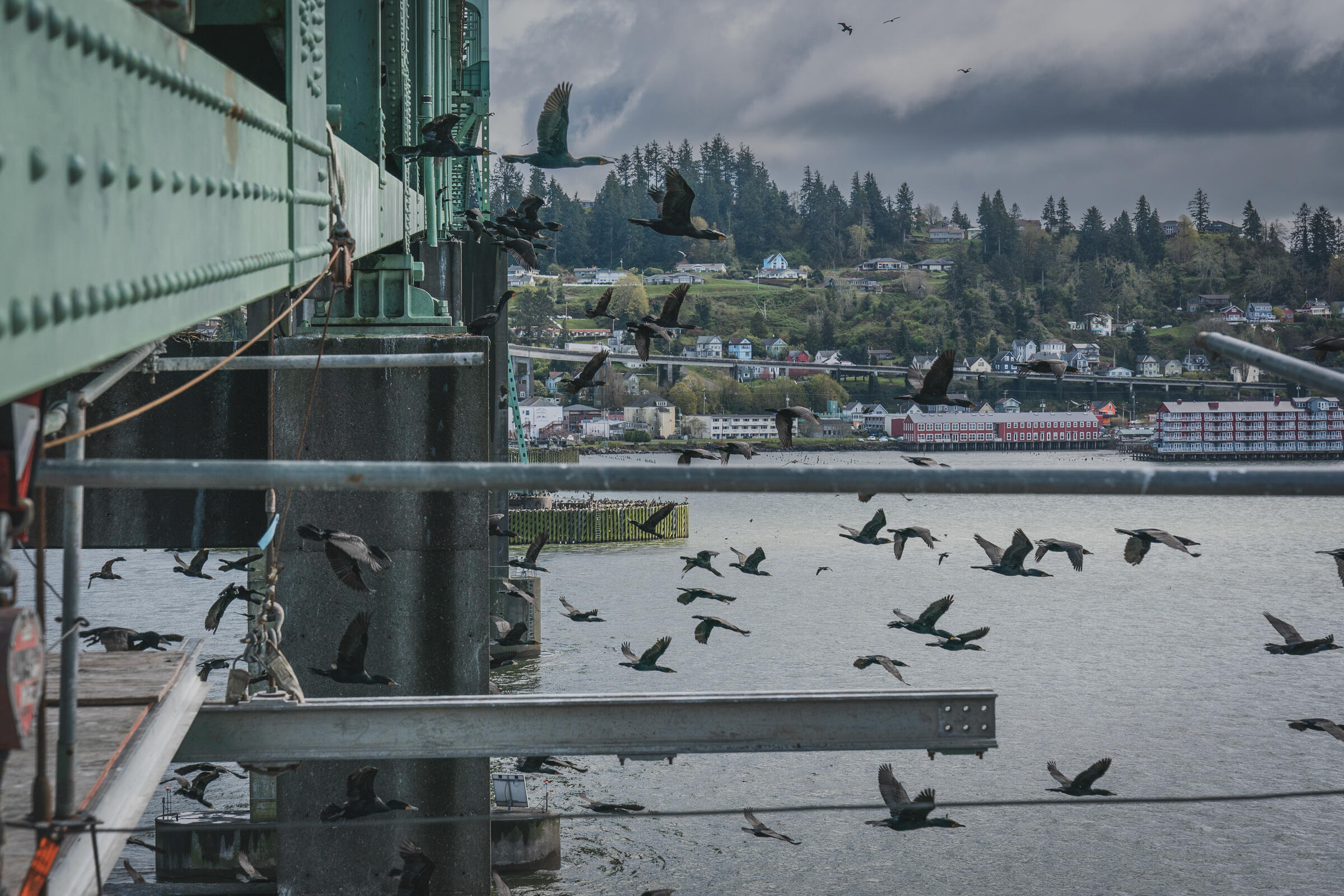 The Astoria-Megler Bridge, where thousands of Double-crested Cormorants have taken up residence in recent nesting seasons, has become a focal point of tensions over how to live with the fish-eating birds. Photo: Morgan Heim

In Morgan Heim’s images, the Columbia River’s colonies of trouble-making waterbirds become as fascinating as they can be frustrating.

Double-crested Cormorants are survivors. Once in steep decline due largely to the effects of DDT, the sleek diving birds have rebounded mightily since a 1972 ban on the insecticide. But instead of celebration, their success has brought conflict.

Cormorants are prodigious piscivores, earning them the scorn of commercial and recreational fishers. For years they’ve been the target of government culling programs aimed at easing tensions, which run high around the Columbia River estuary.

Since moving to Astoria, Oregon, in 2017, conservation photographer Morgan Heim has been engrossed by the cormorant conundrum. She aims to both document the birds’ complicated relationship with humans and capture their beauty and intelligence. “I want people to be challenged,” Heim says. “How can we wonder at them and have empathy for them, even if they can be inconvenient?”

The Astoria-Megler Bridge spanning the lower Columbia River offers a case study in the cormorant’s knack for confounding people’s plans. Until recently, nearby East Sand Island hosted the continent’s largest cormorant colony, about 15,000 pairs. Each year they devoured some 11 million juvenile salmon and steelhead—consuming up to 17 percent of smolts making their way to the sea, some protected by the Endangered Species Act.

To safeguard the fish, the U.S. Army Corps of Engineers and partners began killing thousands of cormorants in 2015. The next year most remaining birds fled. A major colony has since formed at the bridge, where cormorants hamper renovation work and salmon and steelhead likely make up even more of their diet. 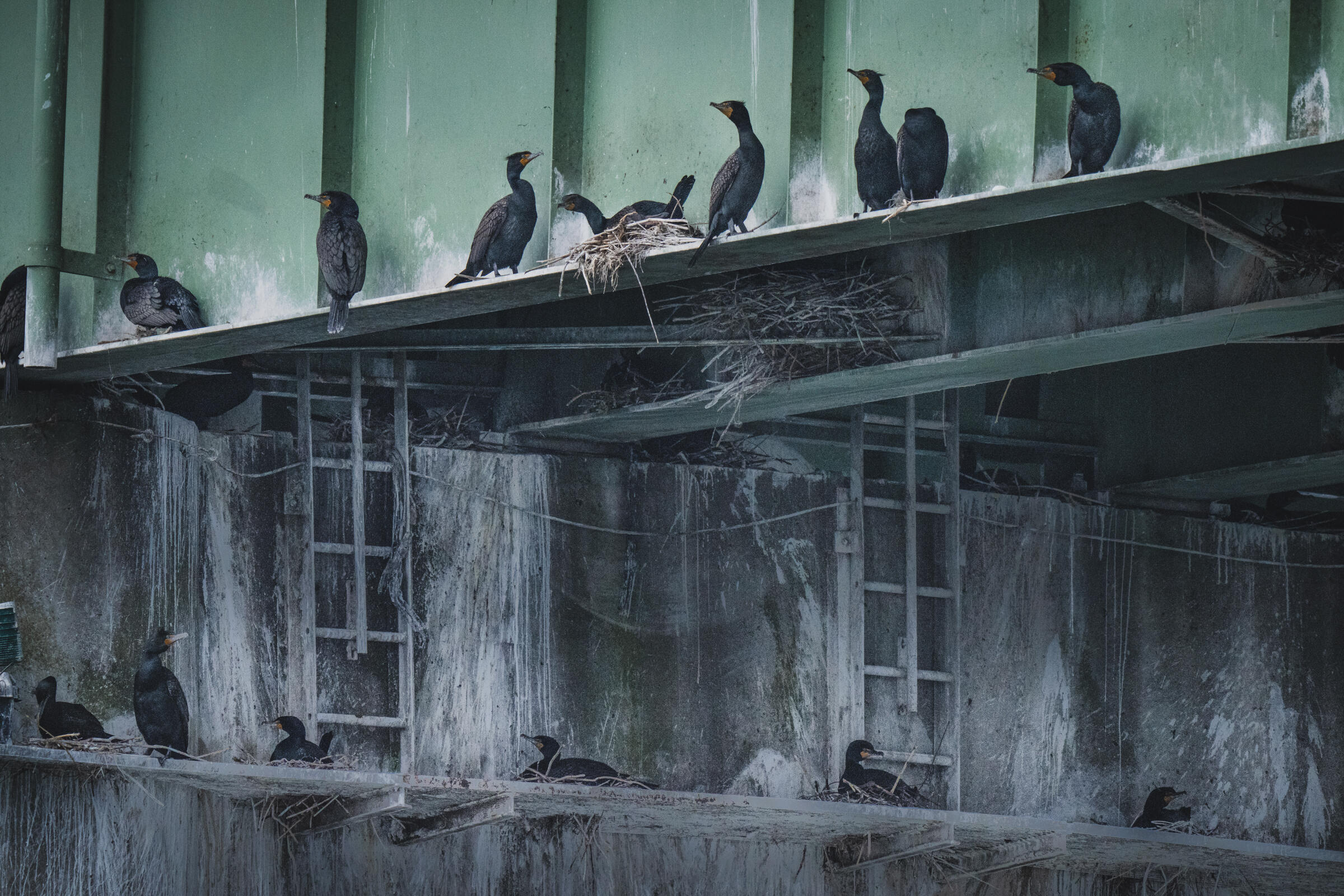 Cormorant guano on the Astoria-Megler Bridge must be removed periodically to prevent corrosion. Photo: Morgan Heim

Heim’s timelapse images from the bridge offer fascinating insights into cormorant behavior. This pair persisted through an extreme heat wave and other perils to raise the nestlings on the right from the eggs on the left. Photos: Morgan Heim 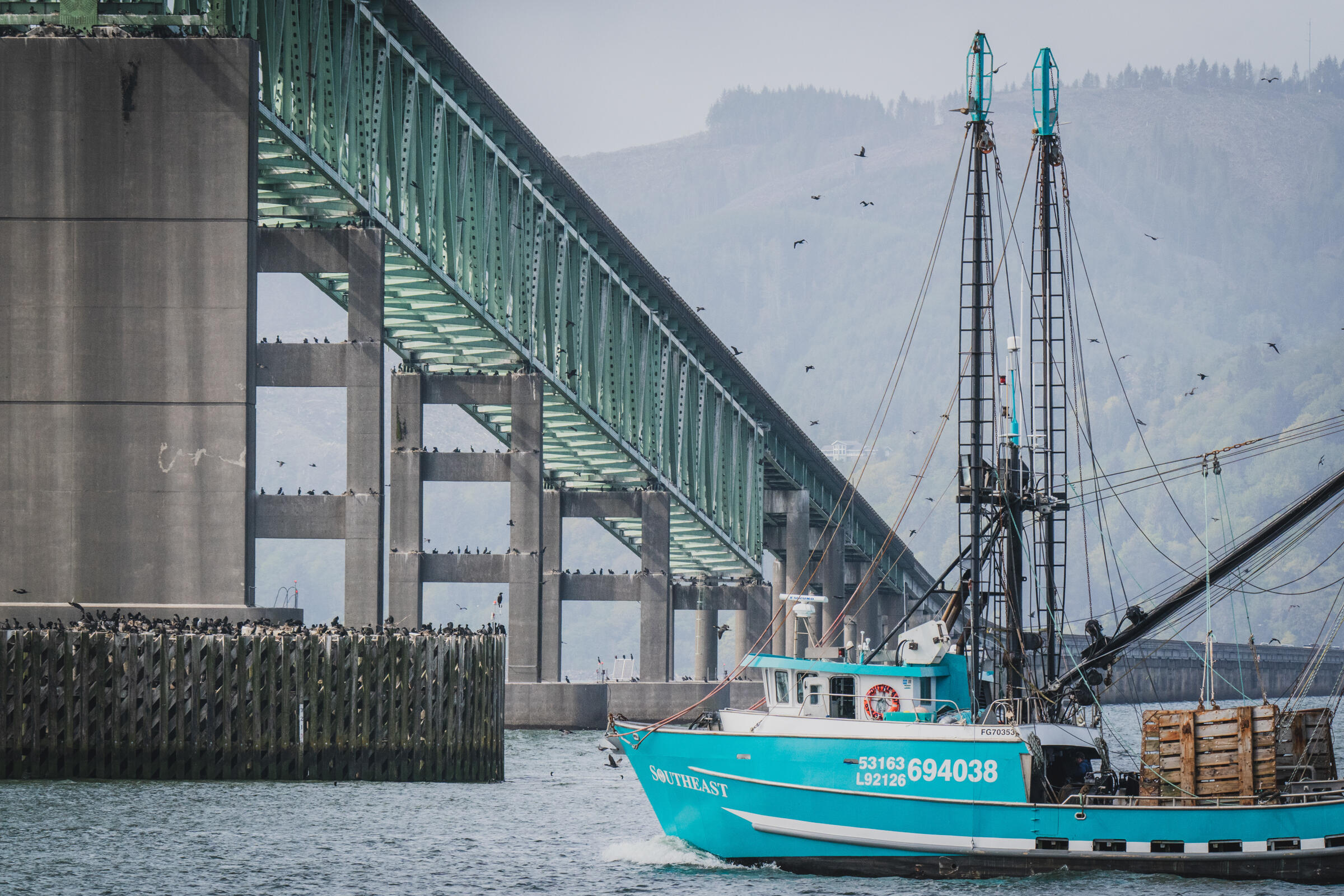 Many people who make their livelihood from fishing view Double-crested Cormorants, including thousands of the fish-devouring birds that nest on the Astoria-Megler Bridge, as a nuisance. Photo: Morgan Heim 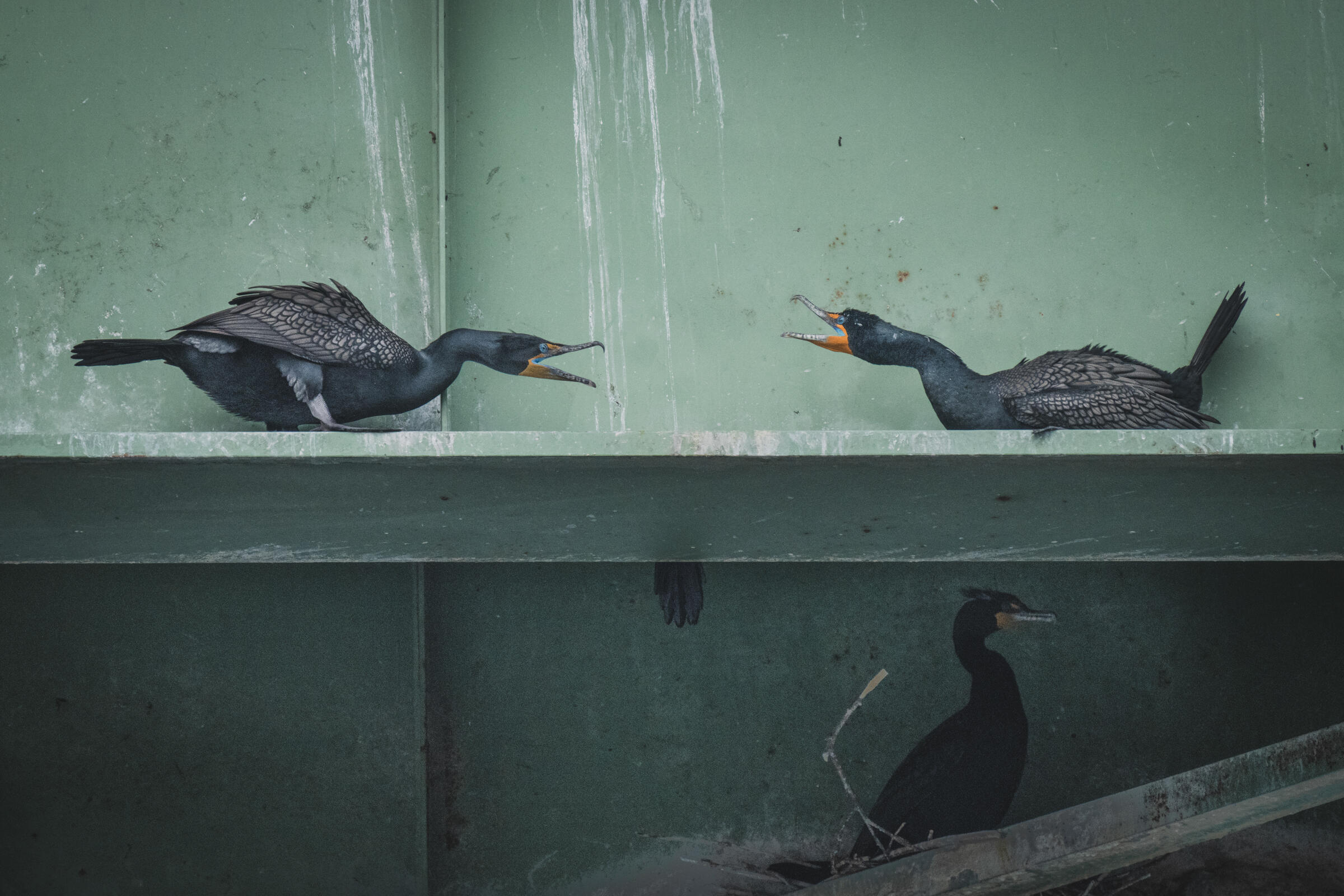 Empathetic with her neighbors whose lives are complicated by cormorant colonies, Heim is also interested in exploring the beauty, behaviors, and personalities of individual birds. Photo: Morgan Heim

The more than 8,000 cormorants that have taken up residence on the bridge in recent years complicate the current $24 million phase of the repainting project. Hoping to persuade the birds to nest elsewhere, this spring the Oregon Department of Transportation partnered with Wildlife Services, part of the U.S. Department of Agriculture, to haze them with pyrotechnics and other deterrents. Before painting, workers must pressure wash the structure to remove cormorant guano, which is acidic and corrosive.

Photographing the bridge maintenance has opened Heim’s eyes to the costs and complexities of living with the birds. “I think I’m a little more empathetic than I used to be about the people who are struggling with cormorants being here,” she says. But Heim has also been disturbed by bursts of vigilante violence against the birds; she has watched cormorants fall from the sky after cracks of gunfire. 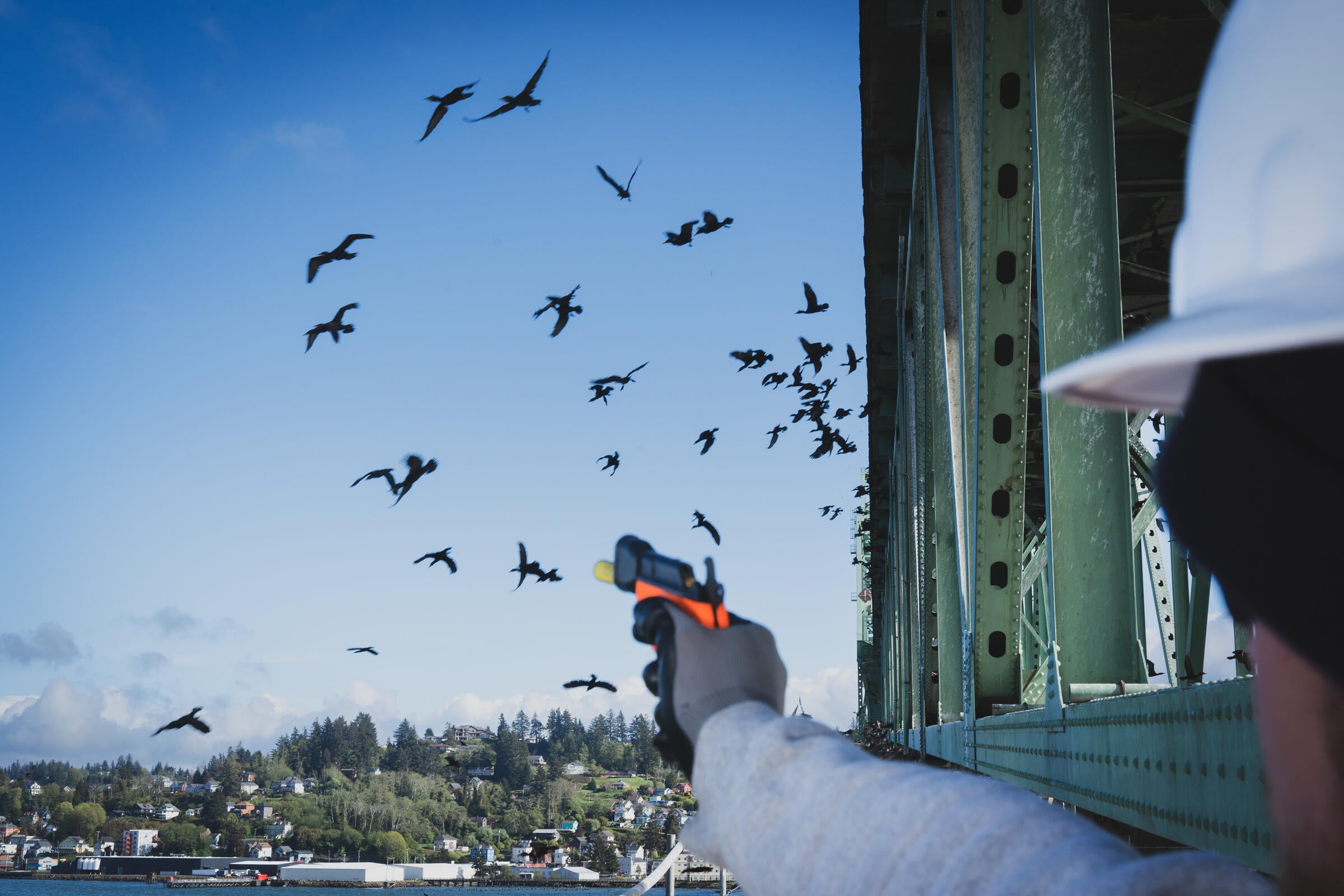 Hoping to persuade cormorants to nest somewhere other than the Astoria-Megler Bridge, this spring the Oregon Department of Transportation partnered with Wildlife Services, part of the U.S. Department of Agriculture, to haze them with pyrotechnics and other deterrents. Photo: Morgan Heim 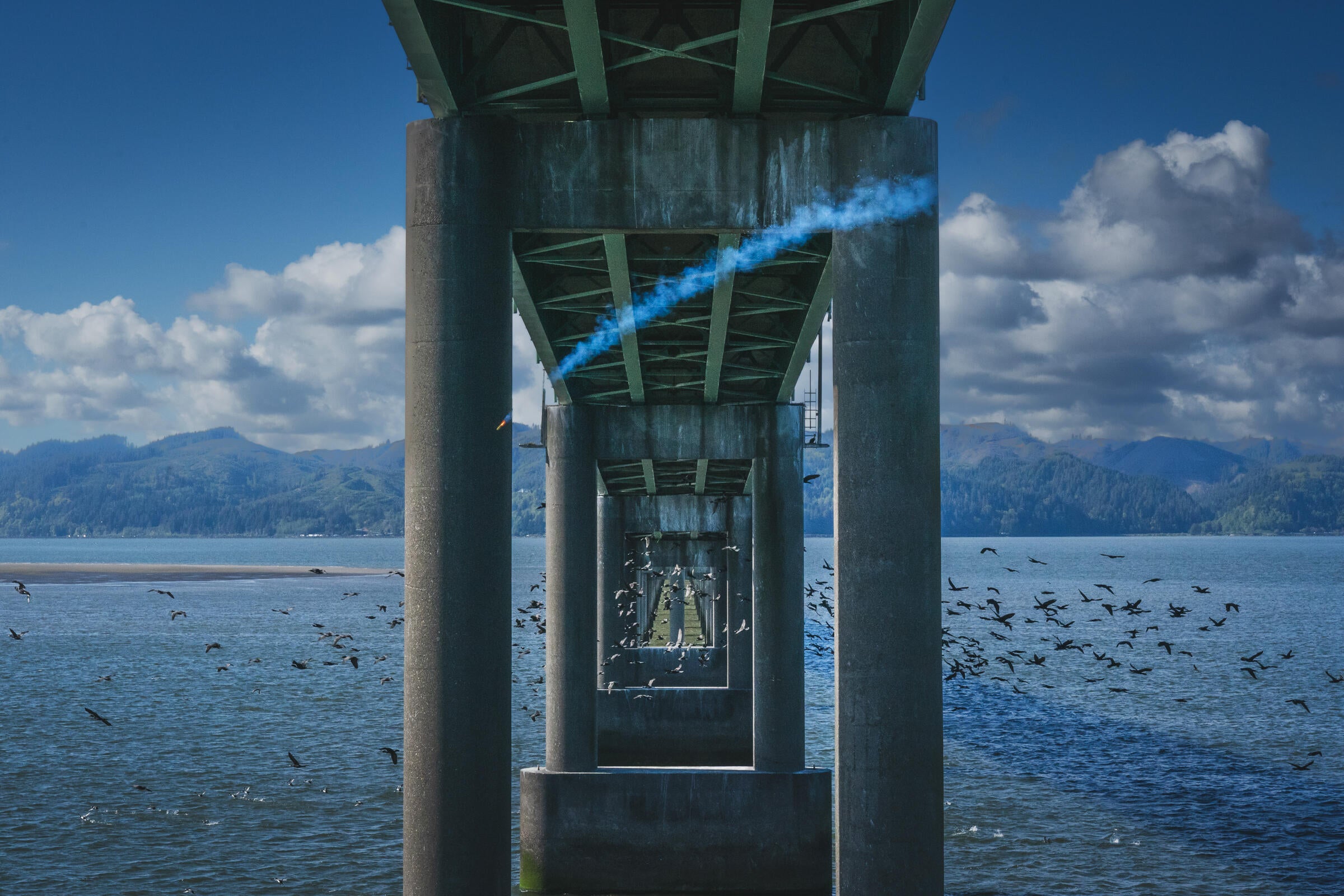 Cormorants scatter as a flare streaks beneath the bridge. Photo: Morgan Heim 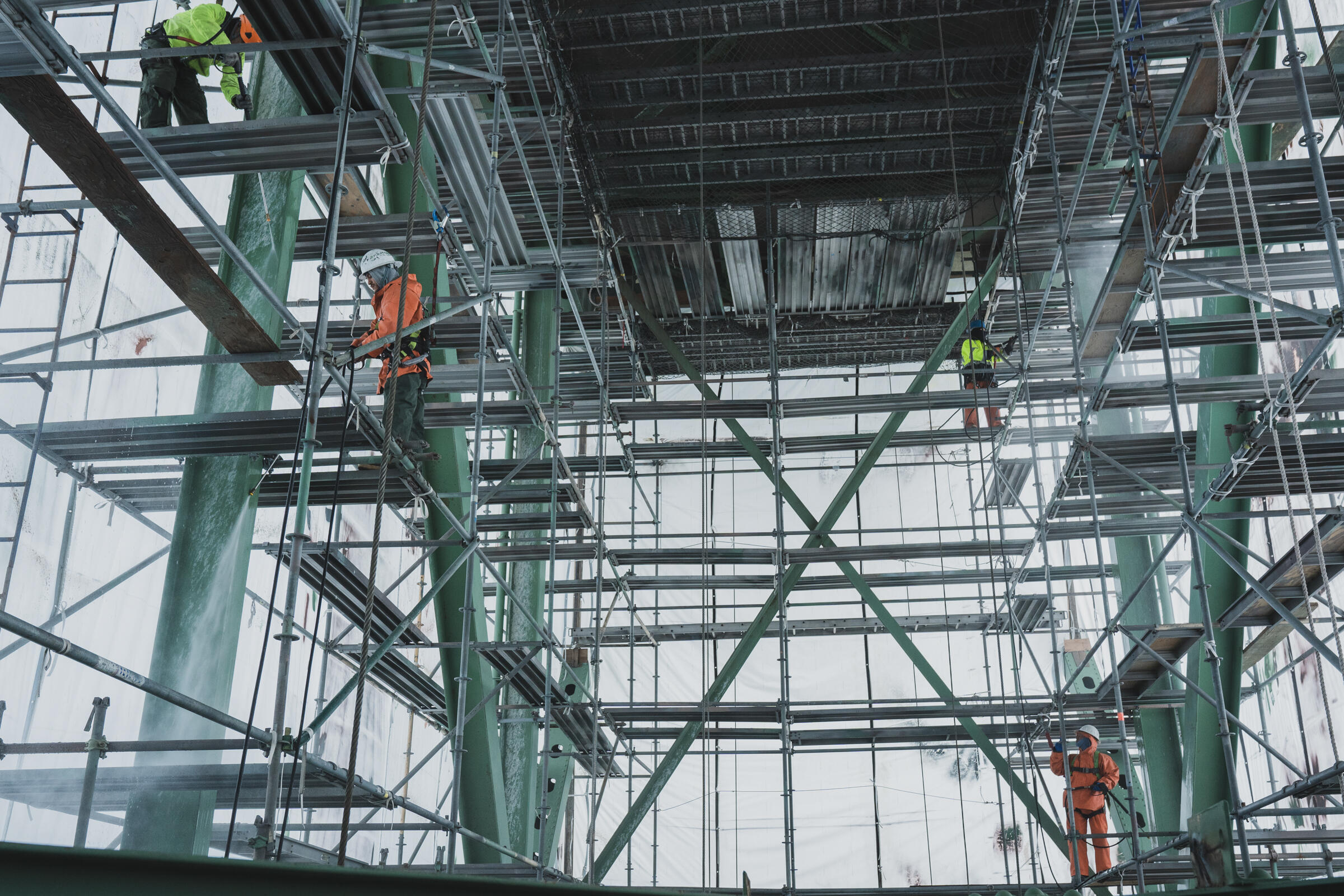 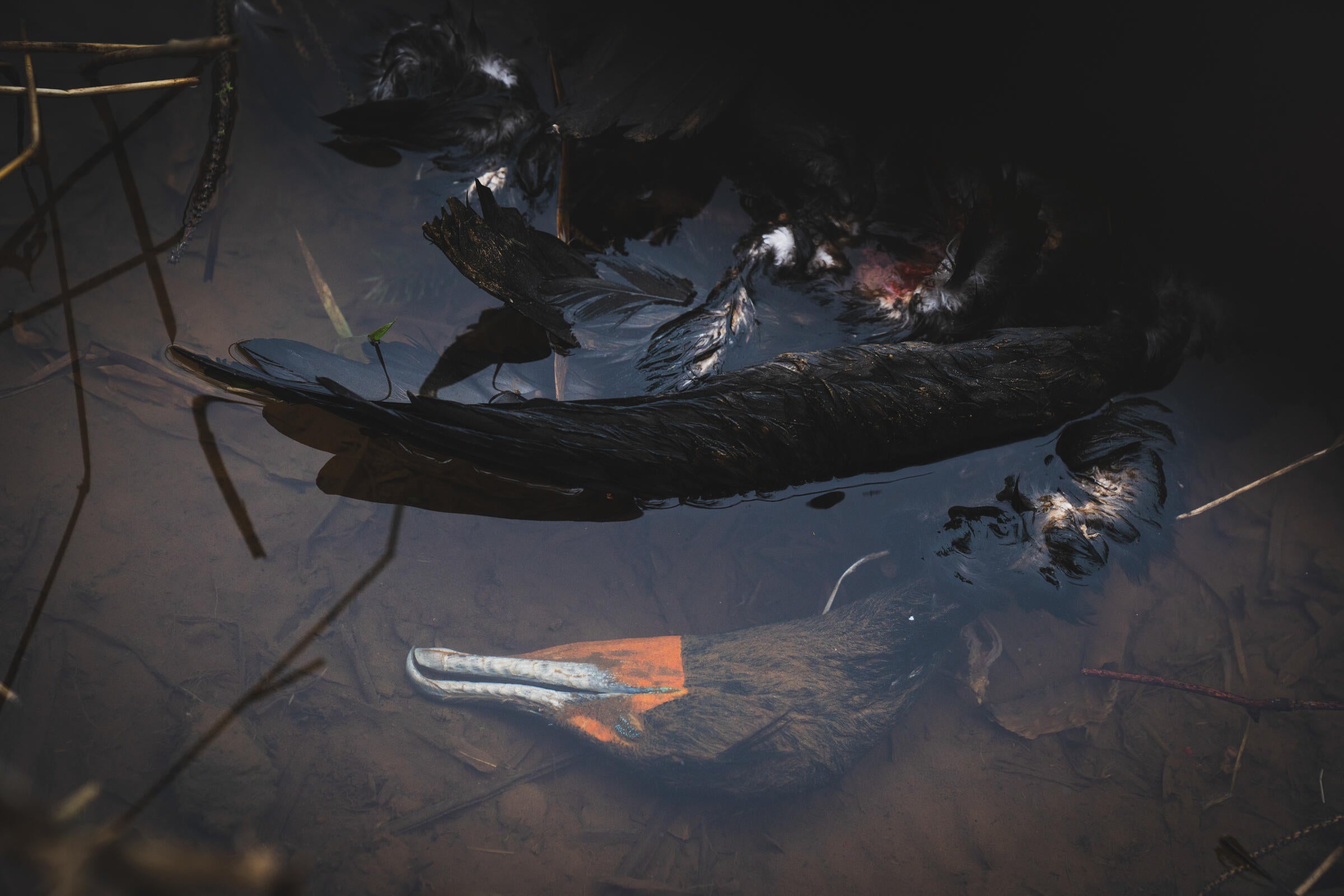 Heim has seen disturbing bursts of vigilante violence against cormorants like this one, which washed ashore after being shot. Photo: Morgan Heim

The Columbia River’s fishery relies on government subsidized hatcheries that raise and release tens of millions of juvenile salmon and steelhead each year. Double-crested Cormorants have caught on. The birds routinely travel up a tributary, the Youngs River, to gorge on captive-bred fish swimming to the Pacific Ocean.

To limit the casualties, workers at a facility farther downstream wait for a seaward tidal surge before releasing smolts from net pens at night, when cormorants are inactive. Though the birds undoubtedly eat huge quantities of fish, some experts say they’re unfairly scapegoated for doing what they’ve always done, while dams, overfishing, and other human activities drive fishery declines.

“It’s easy to develop the perception that cormorants are having some impact on a fish species we’re interested in,” says Don Lyons, director of conservation science for Audubon’s Seabird Institute. “It’s actually rarely substantiated that that impact is significant.” 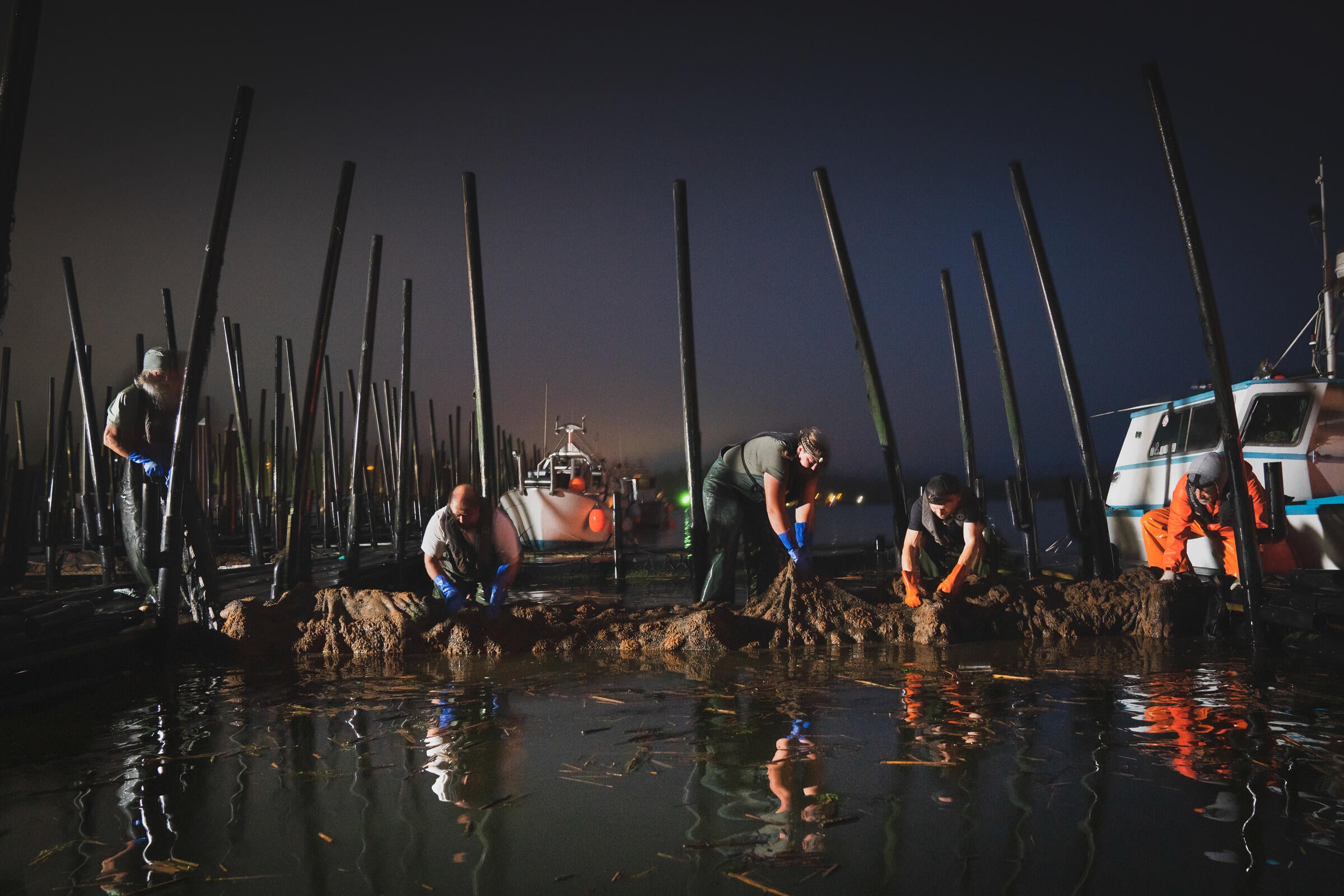 To limit predation by cormorants, workers release juvenile fish from net pens into a Columbia River tributary at night, when the birds are inactive, during a tidal surge that will carry them quickly to sea. Photo: Morgan Heim 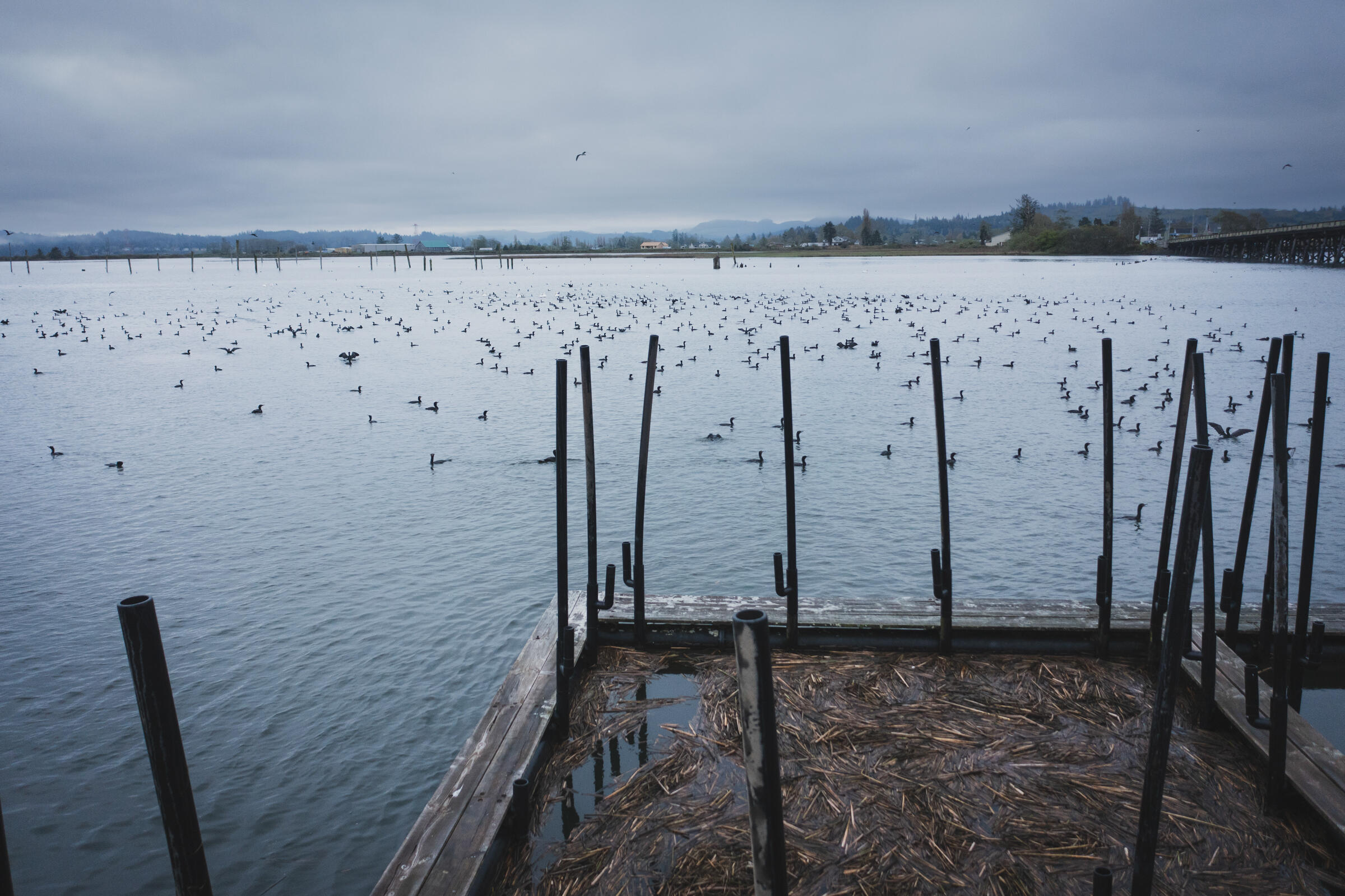 Cormorants swim outside net pens that hold salmon raised in hatcheries. The birds have learned that each spring hatchery workers release millions of fish in the cormorant equivalent of an all-you-can-eat buffet. Photo: Morgan Heim 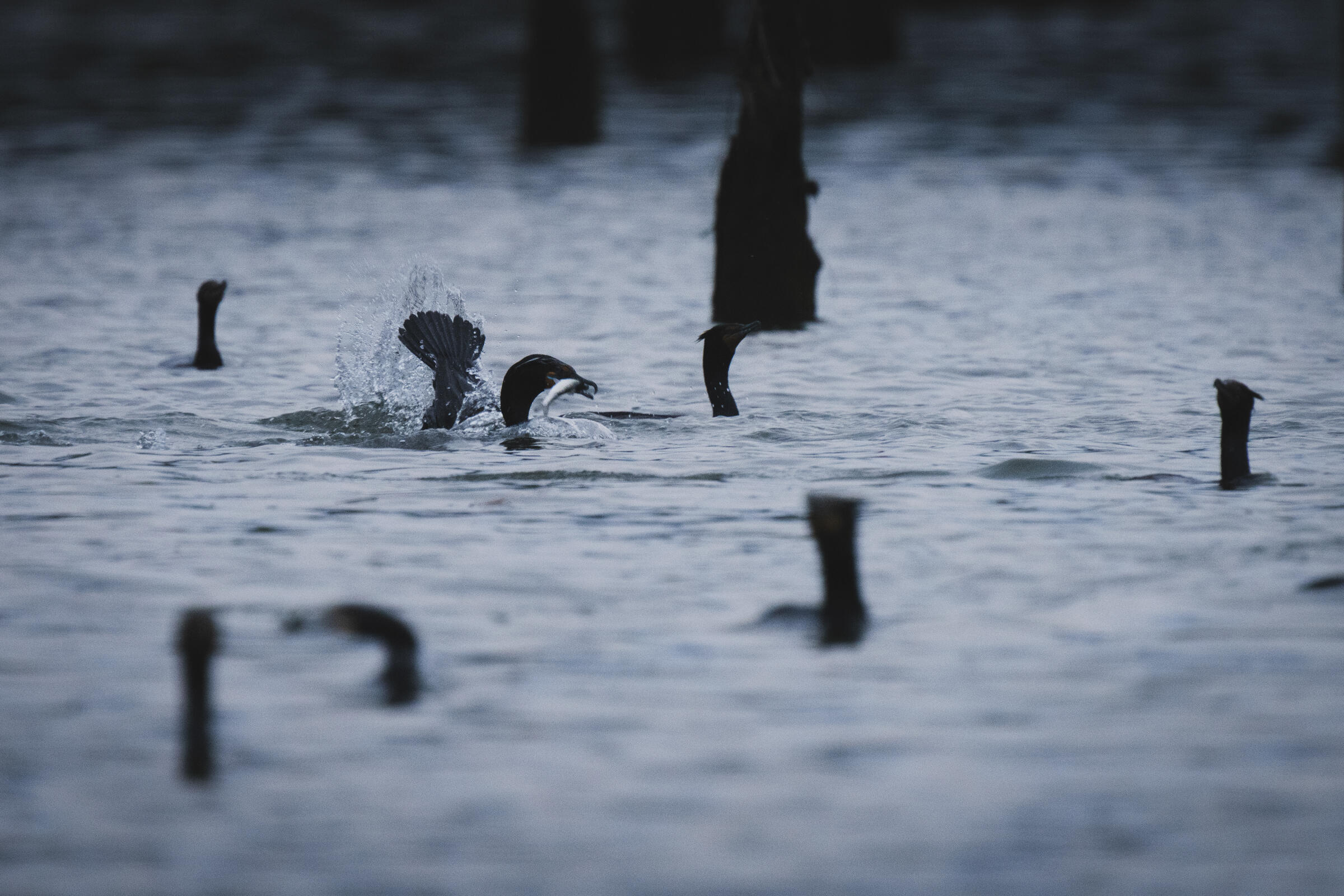 A Double-crested Cormorant emerges from the Youngs River with a juvenile salmon. Photo: Morgan Heim 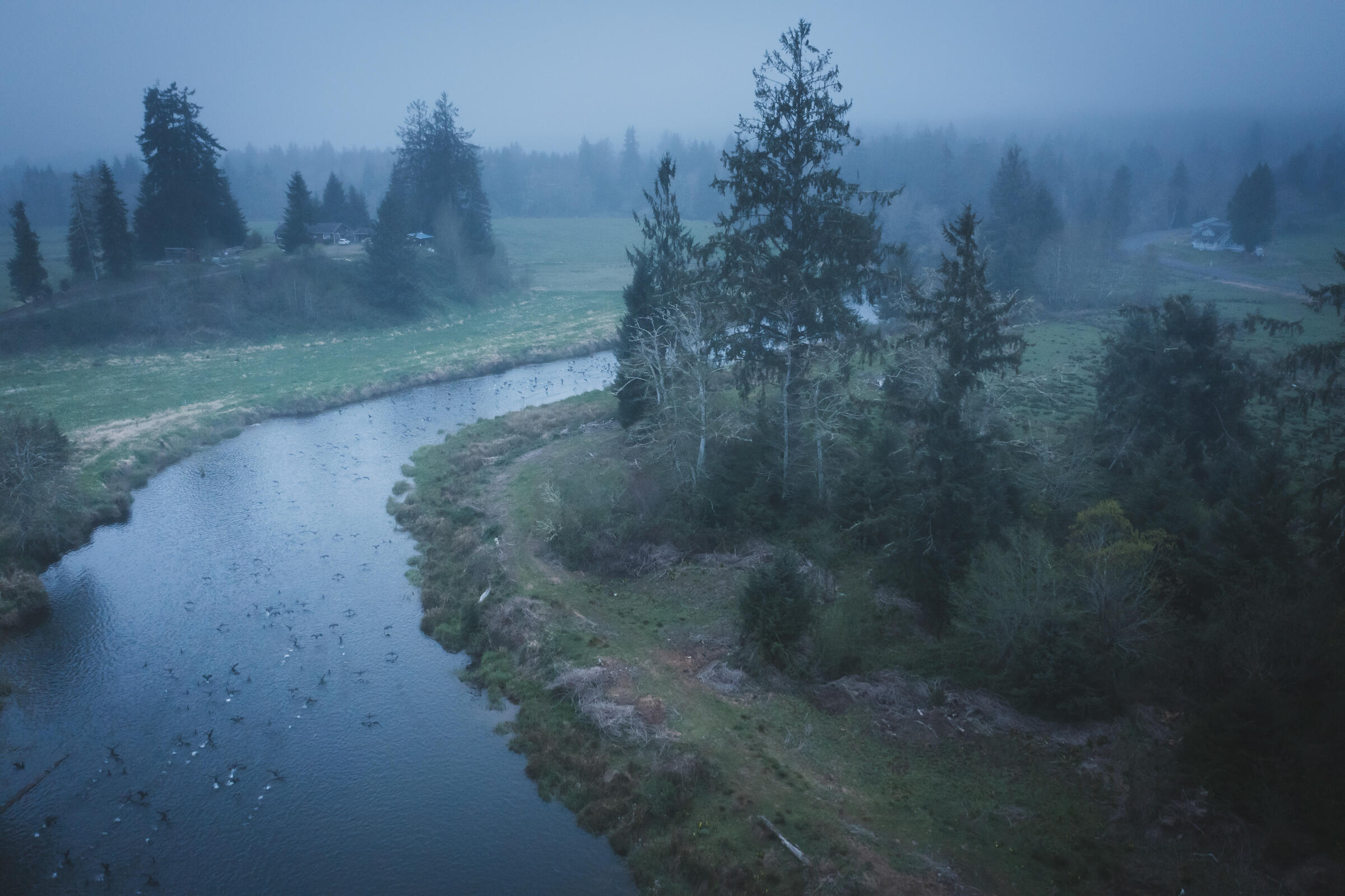 Cormorants routinely travel up a tributary, the Youngs River, to gorge on captive-bred fish swimming to the Pacific Ocean. Photo: Morgan Heim

Although Double-crested Cormorants tend to generate antipathy when they amass in noisy, noisome colonies, an individual bird can inspire a much different response.

In 2015 a wounded juvenile female arrived at the Wildlife Center of the North Coast, an Astoria rehabilitation facility. Too injured for release, Cormie has stayed on at the center, charming its staff, volunteers, and visitors, and becoming an ambassador for her species’ elegance and charisma.

“Everything about her is amazing,” says Melisa Colvin, the center’s bird curator. Cormie has been a quick learner. Among her new skills: assisting staff with her health checks and soliciting donations. Colvin always liked cormorants, but forming a bond with Cormie, who excitedly flaps her wings when Colvin approaches, has deepened her belief that the species deserves more respect.

“When I look out at those birds on the bridge,” she says, “I see her.” 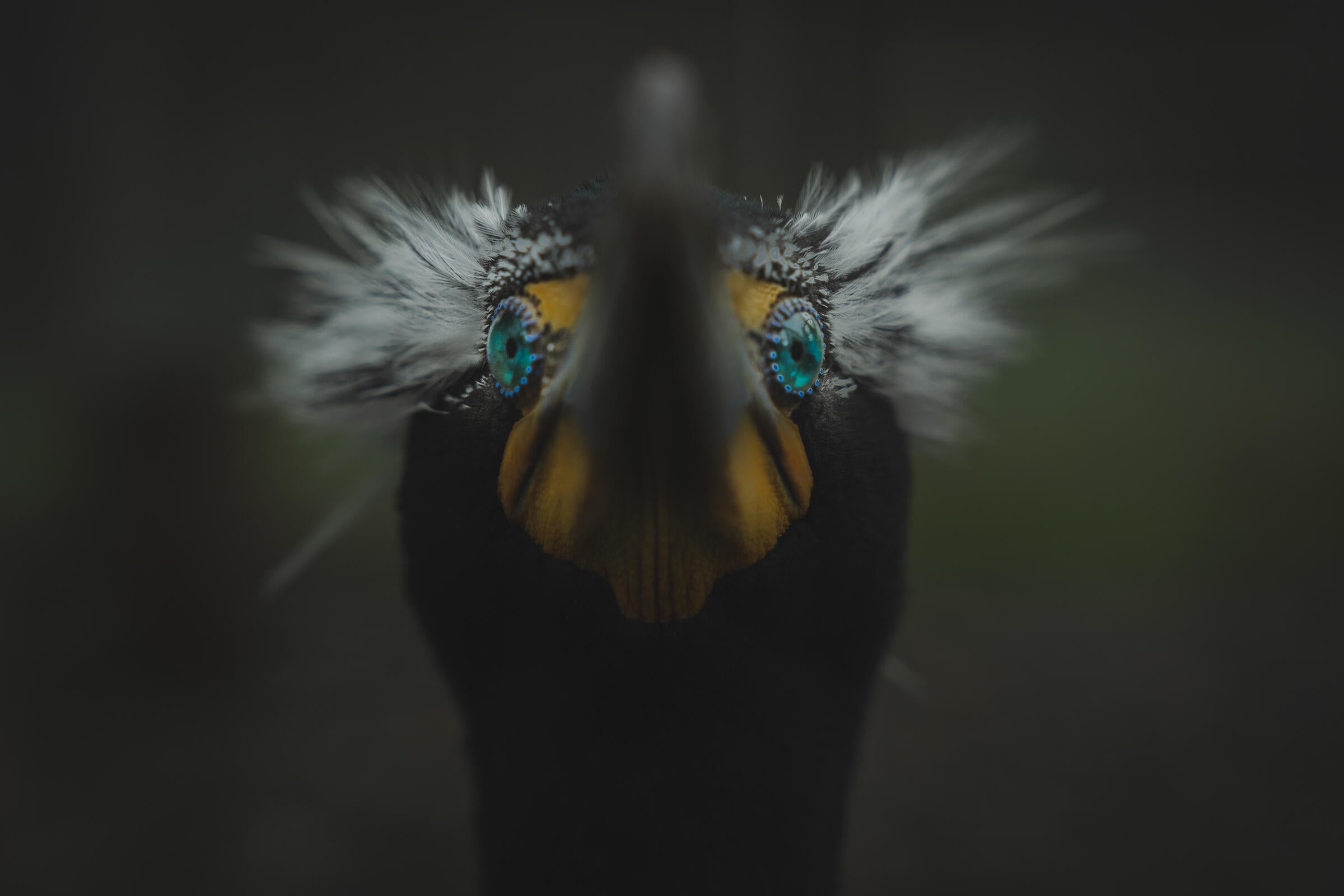 Too injured to be safely returned to the wild, Cormie—a Double-crested Cormorant brought to an Astoria rehabilitation center in 2015—has become an ambassador for her species’ elegance and charisma. Photo: Morgan Heim 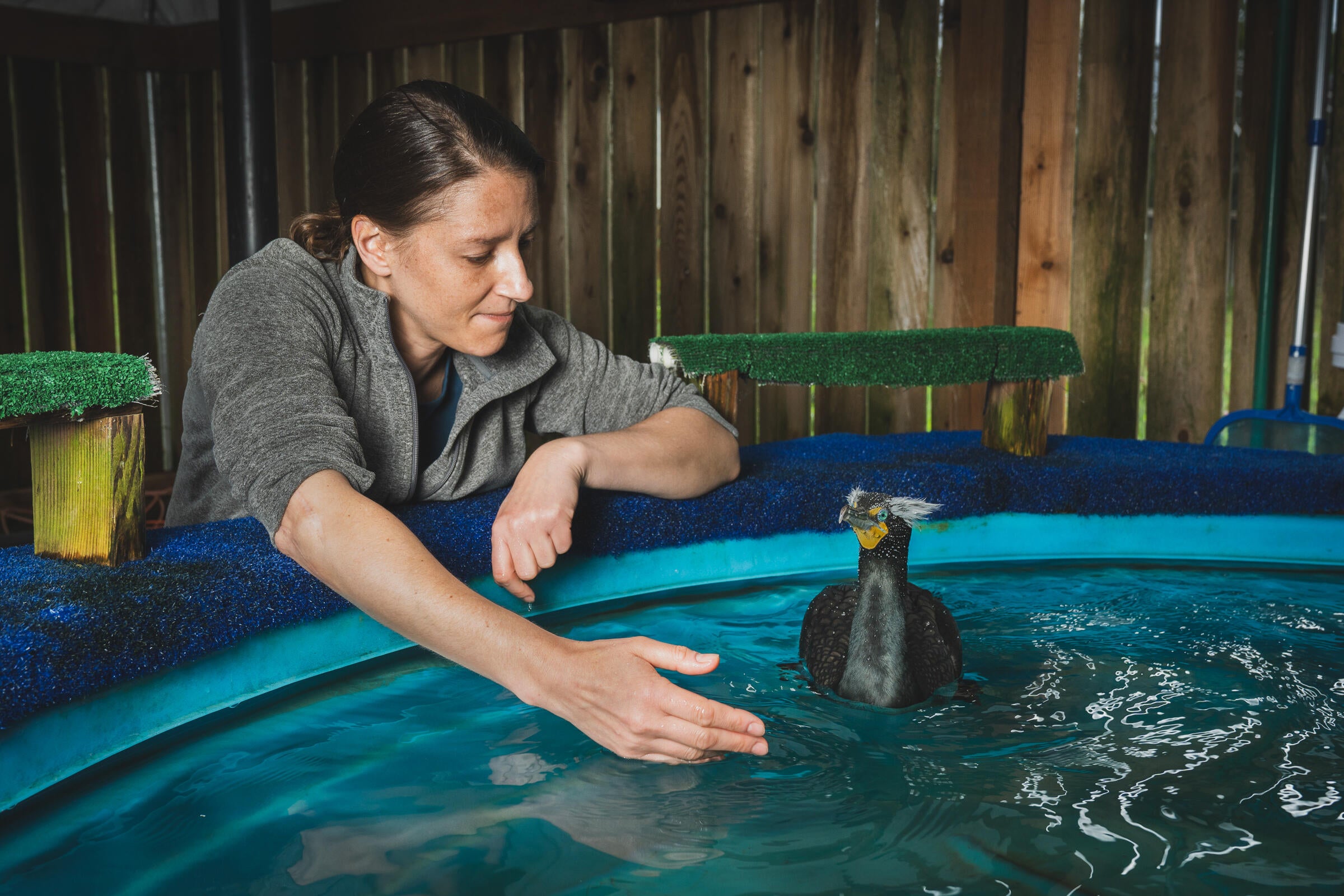 While Cormie has many fans, she is most closely bonded with Melisa Colvin, bird curator at the Wildlife Center of the North Coast. Colvin has trained Cormie to participate in her own health check-ups. Photo: Morgan Heim 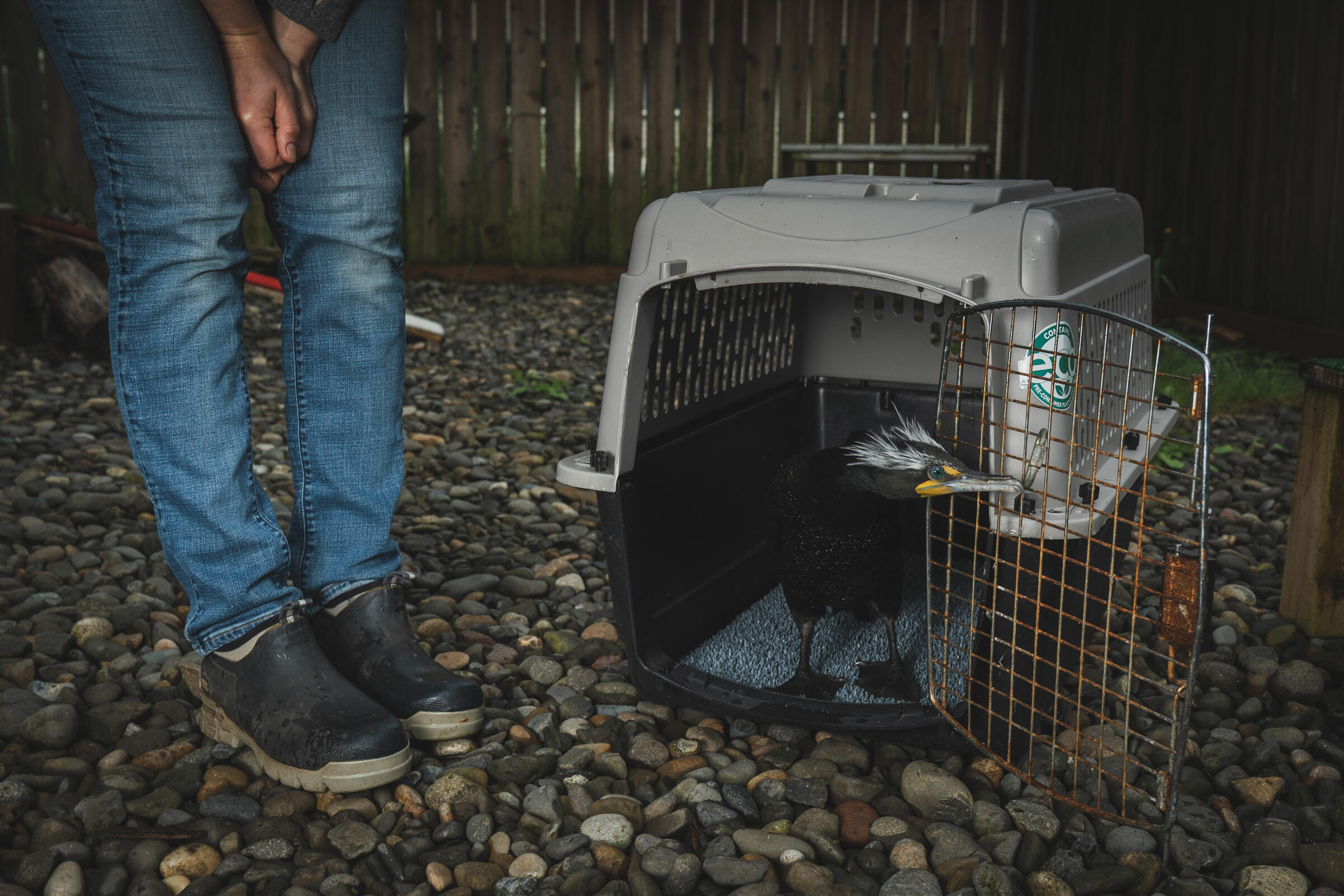 Cormie has also learned to close the door to her crate. Photo: Morgan Heim 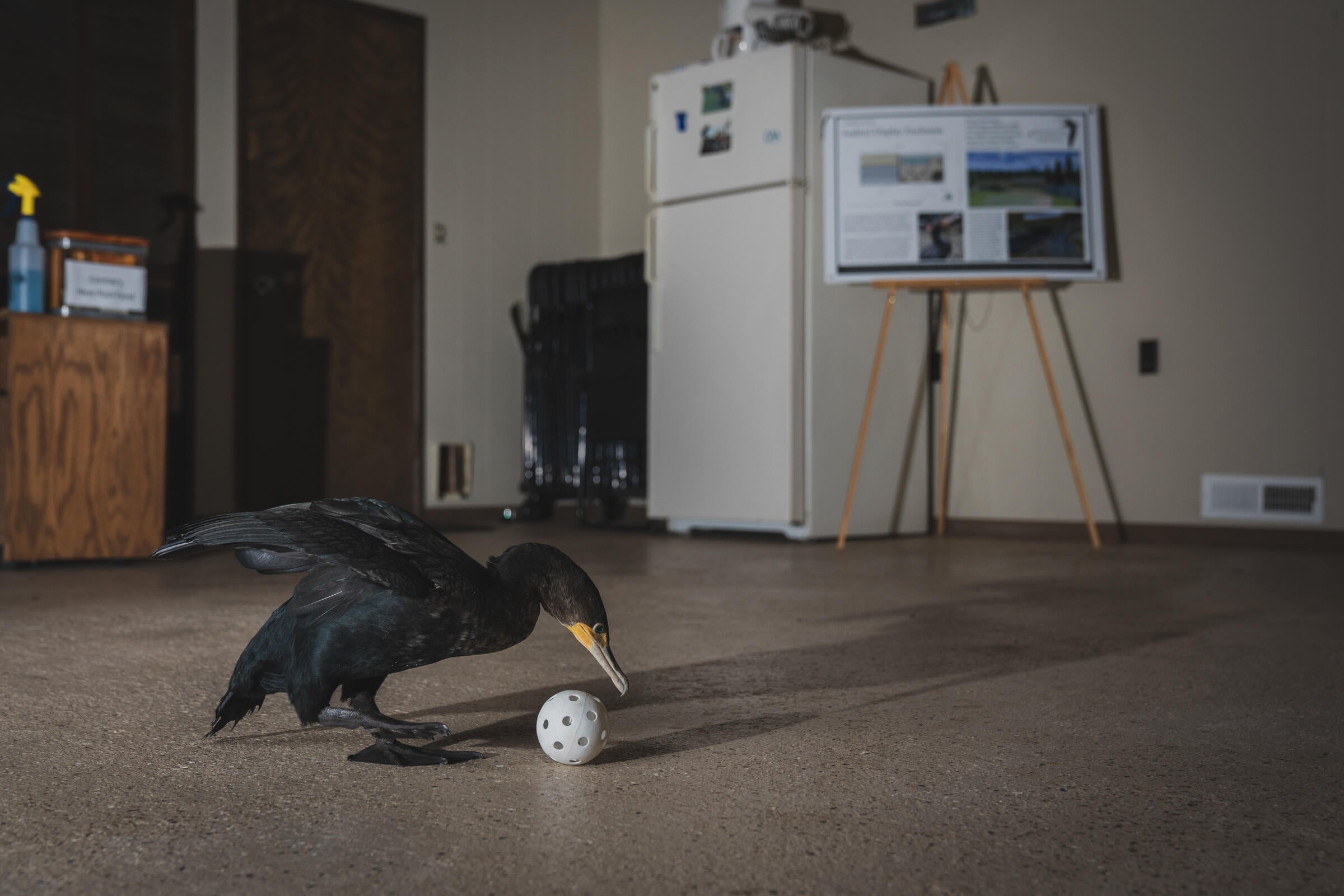 Colvin and colleagues at the facility make sure Cormie has plenty of enrichment activities. Photo: Morgan Heim 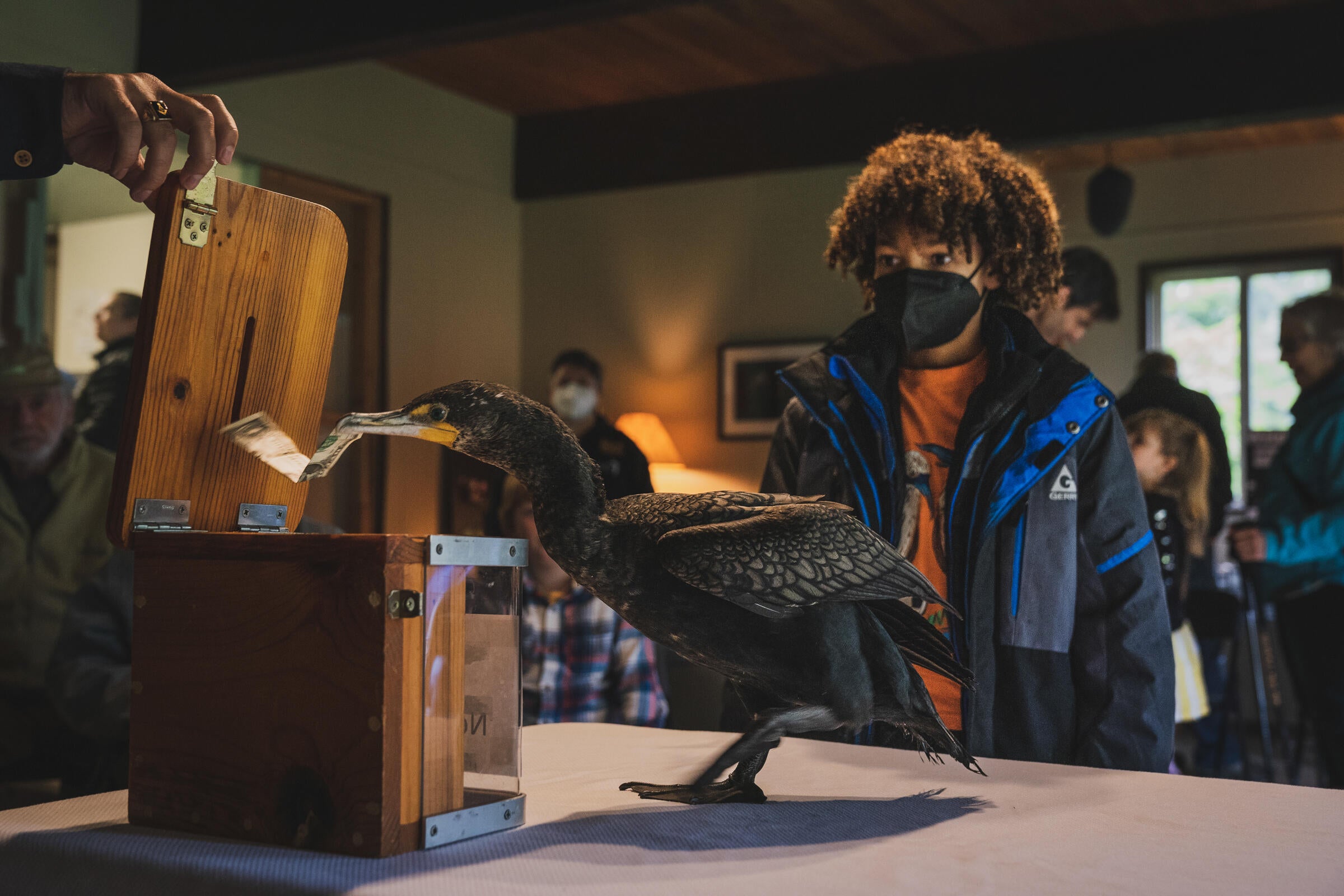