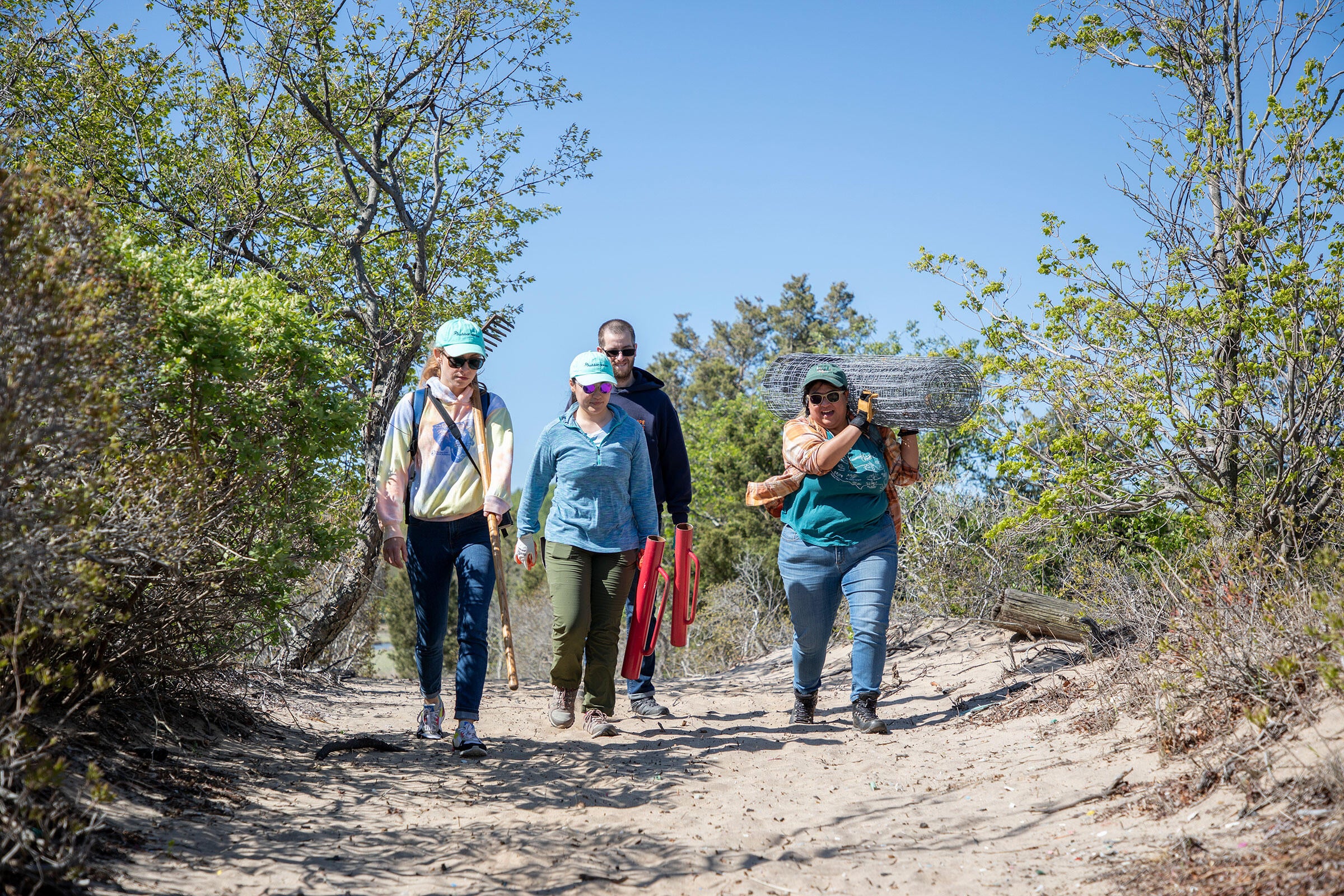 Hit the Beach With A Shorebird Biologist

The job of protecting vulnerable beach birds starts early. By 7 A.M. one morning in late April, Shelby Casas is almost out the door. The shorebird biologist with Audubon New York checks the weather to confirm no dangerous storms are forecast; she also looked at it before bed last night. “I check the weather a lot,” she says, laughing. Her bag is packed with the essentials—bug spray, sunscreen, and a field note­book—and she tosses in fresh fruit and water bottles. After feeding her pets, Casas grabs her favorite car breakfast (granola bar and thermos of coffee) and climbs into her Subaru Outback. She may spend hours driving between sites all day. On long trips, she often listens to audiobooks—next on her list is Margaret Atwood’s Oryx and Crake. This morning she’s heading to a private beach close to her apartment, so music will do.

At around 8:30 A.M. Casas parks near Long Island’s Half Moon Beach, one of eight beachfront nesting sites she and two techni­cians have monitored since March. From the front seat she taps on her smartphone to open NestStory, an app for biologists tracking bird nests, and revisits notes from the last visit here three days ago (“four unleashed dogs”). Then she checks—yep, you guessed it—the weather, again; it’s clear. Grabbing her backpack, she loops binoculars around her neck, tips a spotting scope over her shoulder, and walks down the narrow trail to the beach.

By 9:30 A.M. she’s scanning the sand with binoculars, then walks to the last known location of a pair of Piping Plovers near some string fencing. If she spots them inside the restricted area—marked by metal posts connected by string and signs declaring the area closed for nesting birds—Casas will watch from a distance. “We want to cause the least amount of disturbance possible,” she says. If one of these monitored birds performs a broken-wing display—a trick to attract the attention of a predator and lure it away from the nest—Casas knows she is close to the nest.

Cautiously she moves ahead, ducking under string fencing while scanning the ground for camou­flaged eggs before each step. Aha! She spots two black-spotted tan eggs in the sand. Casas quickly takes a GPS location, then backs away, trying to minimize her footsteps as crows may use the prints as a crumb trail leading to the eggs. Not good. “You learn to be fast, in and out,” she says. She watches from afar until the parents resume incubating, then returns to the car.

From the front seat, at 11 A.M., Casas notes in NestStory that the mated pair might need an extra layer of protection next time she checks on them. Piping Plover par­ents incubate and defend their eggs for about four weeks until chicks hatch; during this vulnerable time foxes, raccoons, and dogs are pri­mary threats. To keep predators out, Casas’s team encircles nests with a chicken-wire exclosure that’s five feet wide. Plovers are small enough to navigate the gaps between wires, but their predators are not. The shorebird is federally threatened, but it’s on the endangered species list for New York (and other Atlantic Coast states), earning these extra layers of protection. 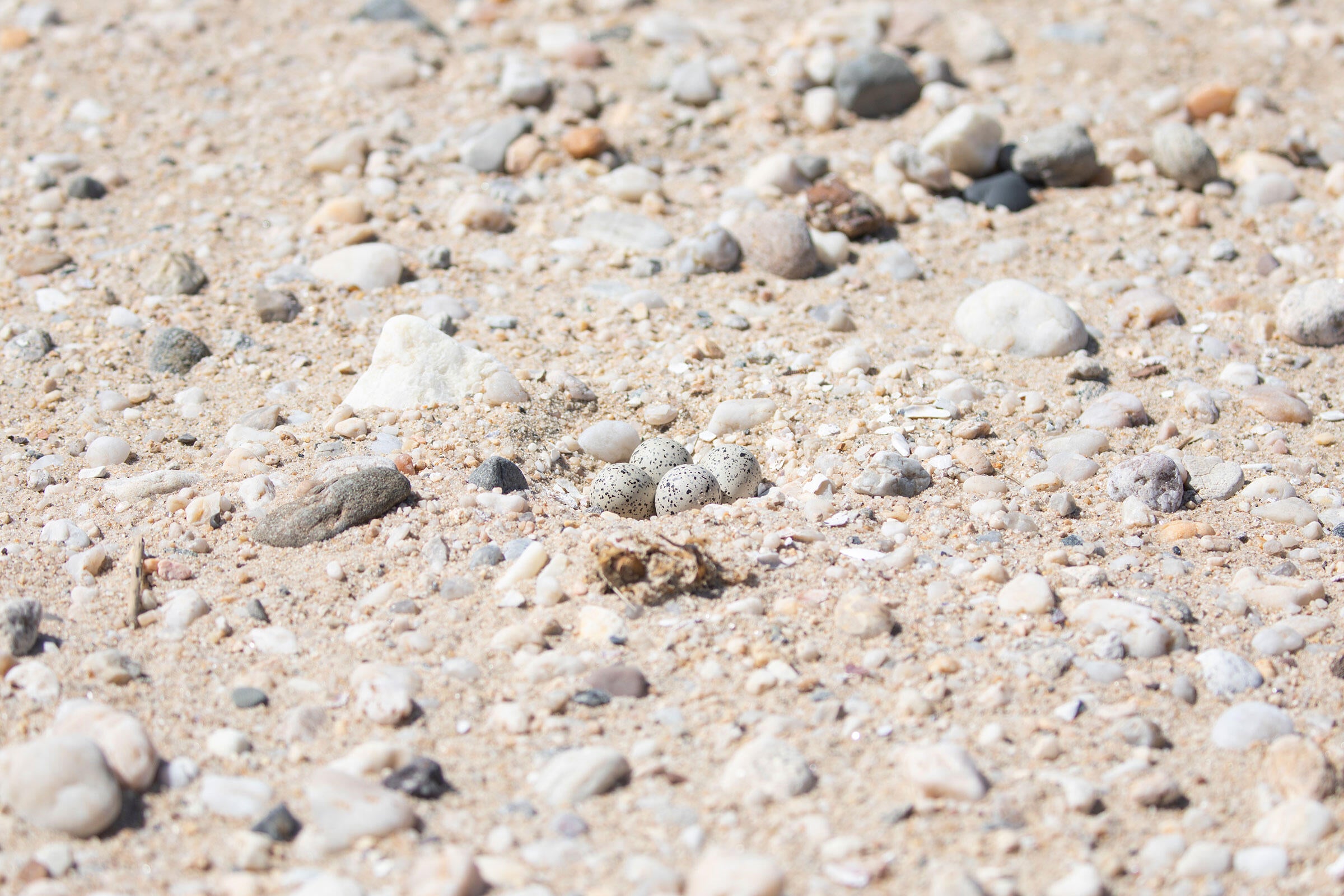 A Piping Plover nest is a scrape, a mere dip in the sand on which rest four speckled eggs. Photo: Luke Franke/Audubon

The exclosures can make or break a nest’s success. Last year the team delayed enclosing a nest because Casas was sick; the next day predators destroyed the eggs. She refuses to let that happen again.

After saving the entry, Casas drives to the next site, Prospect Point. She arrives just past noon and repeats the drill: reads through the last visit’s notes, checks the weather, steps onto the beach, and scans for birds. After a close study, she concedes that the beach’s plo­ver pair hasn’t laid eggs yet. Today is quiet, but come summer Casas’s crew will stay busy monitoring eggs and fluffy chicks, documenting how many young birds survive to fledge—and if they don’t, how they died.

She walks the beach searching for signs of breeding birds, hugging the water’s edge. Seeing Casas’s official Audubon New York gear, a power walker stops the biologist to ask a question about the fenced-off area. Casas interacts with the bird-curious public often. “A lot of people take pride in these birds and enjoy seeing them,” she says.

Shelby Casas, left, unrolls a bulky chicken wire exclosure on the sand. The four-person shorebird team, right, stands up the circular fence to place it around the plover eggs, protecting it from predators. Photos: Luke Franke/Audubon

She finishes scanning for nesting activity while keeping an eye on the clouds. Bad weather—a thunderstorm or even an early-season hurricane—might mean extra work the next visit to a beach. Seaweed, trash, and even balloons, weave themselves into the fencing. “That could cause a lot of damage—birds could get stuck in it,” Casas says. She will cut debris out to prevent it from snagging birds, and repair fences as needed with the mallet she always carries in her bag. Satisfied she missed no birds, she heads back to the car.

Casas sits in the front seat with NestStory open. It’s 3 P.M.—the end of an average field day. She adds a note about some dog tracks worryingly close to the nesting area, then sets her phone aside. She eases her feet out of her hiking shoes and slips into flip-flops. The day’s work is done. Tonight she’ll check the weather and if tomorrow looks storm-free, she’ll be back at it, working to protect the beach’s feathered inhabitants.

Tools of the Trade 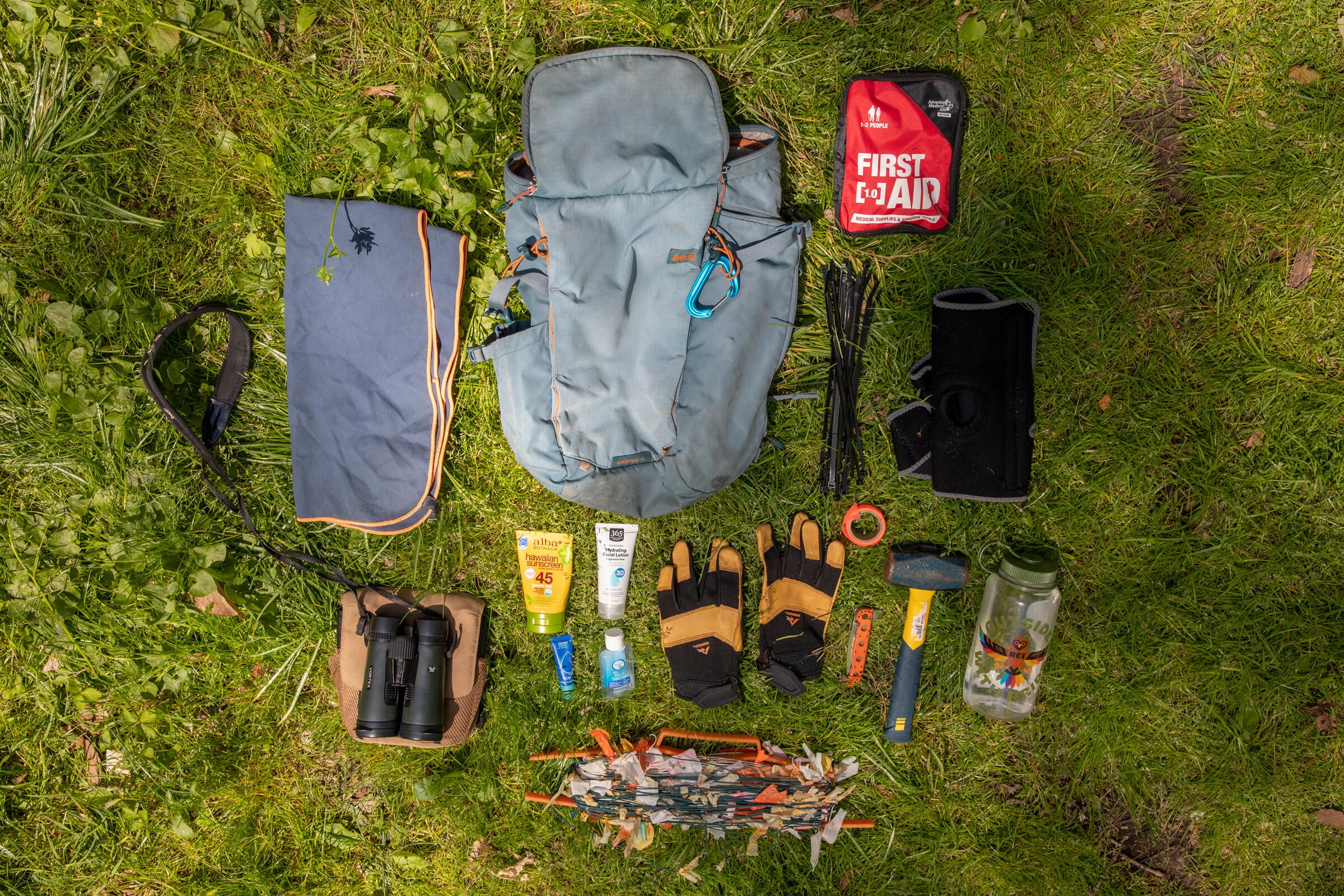 Shelby Casas is always ready to hit the beach. After monitoring shorebirds for several seasons, the shorebird biologist has (almost) everything she needs in her bag for a day on the sand. Somehow, her REI backpack holds it all: “It’s not my favorite one, but it is very sturdy,” she says. Her dependable bag holds the main equipment necessary for her job: gloves, zip ties, and a mallet to repair fences, in addition to string and a roll of orange, plastic tape used to highlight the string fencing. Her Vortex binoculars, when not around her neck, live safely in her backpack. A little mesh pouch secures her knife and multitool, "because you never know,” she says. In a pinch, Casas uses her lightweight towel to dry off after crossing a flooded area—or to wipe off the occasional bird poop.

Equally important is the safety gear. She always has a first aid kit and at least one Nalgene of water in her bag. Walking on the sand takes a toll on her knees (sensitive from a previous injury), making a knee brace a clutch accessory for long days. And she doesn’t skimp on sunscreen, carrying both face and body sunscreen. "I’ve been working on the beach now for five years and sunscreen is very important," Casas emphasizes. “I’ve gotten more vigilant as the years have gone by." Anti-itch cream and hand sanitizer—clean public bathrooms are rare early in the season—round out her gear.

This story originally ran in the Summer 2022 issue. To receive our print magazine, become a member by making a donation today.