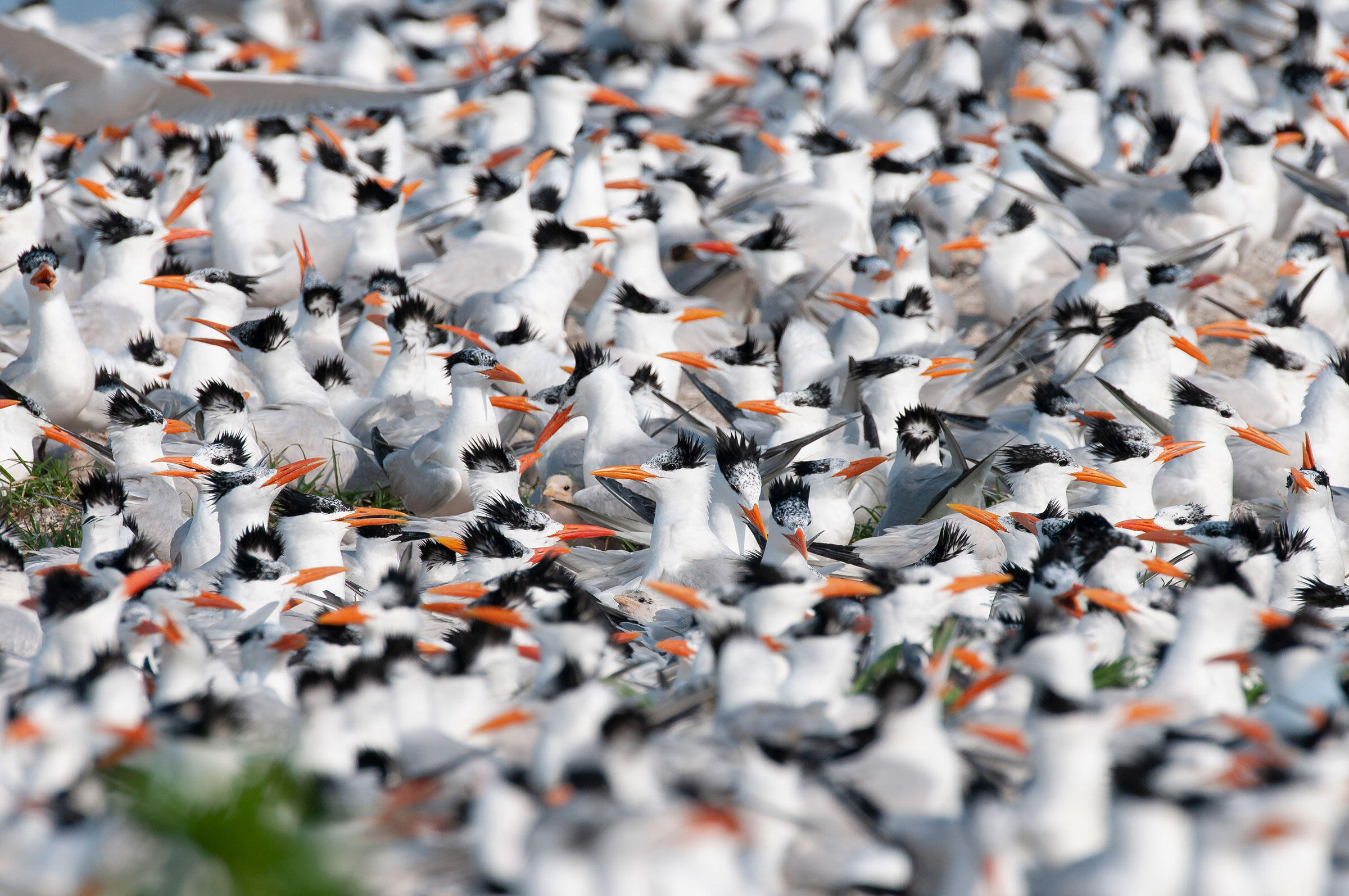 Royal Terns nest in a closely-packed crowd. About midway through the summer, their black crests recede at the crown, leaving a patchy white forehead. Photo: Walker Golder

In summer, North America’s four largest terns are near look-alikes. With a keen eye for detail you can tell them apart.

Terns are mesmerizing. The sight of a tern effortlessly hovering over the waves and diving elegantly after fish is without fail a highlight of any beach visit. But in North America they aren’t the easiest birds to tell apart: Most terns seem to have a black cap, white and gray body, and long pointy bill, and to behave in similar ways.

Use this tipsheet to distinguish between the United States’ four big terns: Caspian, Royal, Elegant, and Sandwich. To check out all our tern species, see Audubon's Guide to North American Birds. And for IDing birds on the go, download Audubon's free bird guide app.

This large, 19-inch-long tern is common along the southern Atlantic and Gulf Coasts and the Caribbean Sea, and in California in fewer numbers. The underside of its wings is white. It has an outstanding shaggy crest that is sometimes spiked up in the back. The Royal Tern’s black crown recedes in early summer, leaving a patchy white head and forehead, as if it’s balding. Pumpkin-orange bill. Moderately forked tail.

The Sandwich Tern is seen often with Royal Terns, but it’s smaller, clocking in at 17 inches long. It’s found year-round around the Gulf of Mexico, southern Atlantic, and Caribbean Sea, where it nests on coastal beaches and barrier islands. White underwings trail to gray at the tips. Like the Royal, its crisp black crown with slightly spiky crest recedes soon after the birds lay eggs in June; by the end of July, when individuals leave their nesting colonies, the forehead is almost entirely white. Most distinguishable by its black bill with a yellow tip. Tail slightly forked.

At 21 inches in length, the Caspian Tern is the largest in the world—almost gull-like in its bulk. In the United States, it’s commonly found along the Atlantic, Pacific, and Gulf Coasts, and can also be seen inland along rivers, lakes, and marshes. The underside of the species’ wings is dark, as if dipped in blackish watercolors, unlike the other species listed here. Its bristly crest is not prominent, looking more like a long buzzcut. Chunky, blood-red bill is tipped with black. Slightly forked tail.

The Elegant Tern is 16 inches long and noticeably slim. It has a far more restricted range than the other species, as it’s seen only on the West Coast; it began nesting in California in 1959 and has spread northward since. Underwings are white. Its fabulous black crest is longer than that of the Royal Tern, sometimes long enough to hit the bird’s back. Its yellow-orange to orange bill is long and slender. Deeply forked tail.

This story originally ran in the Summer 2022 issue. To receive our print magazine, become a member by making a donation today.