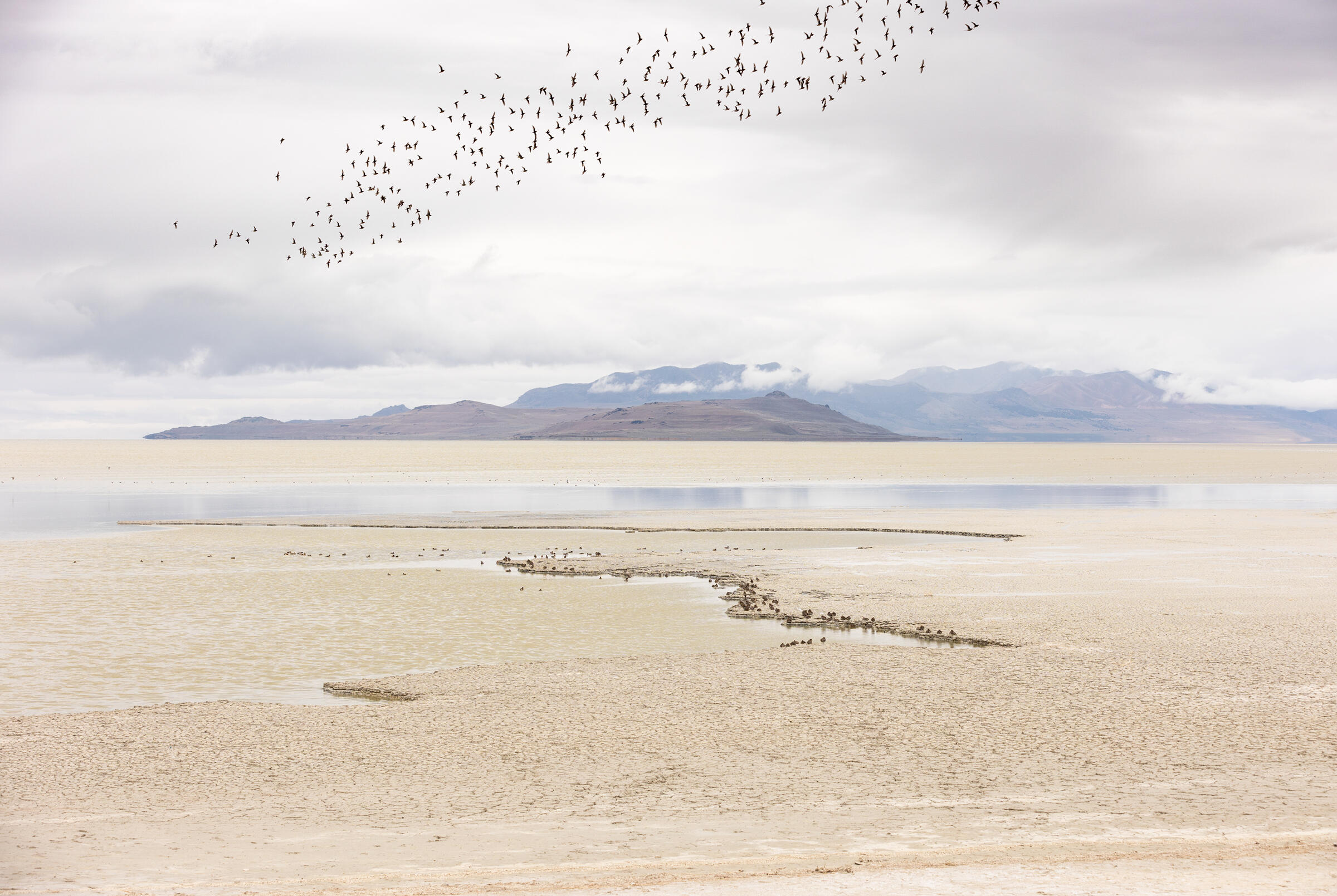 Miles of drying mudflats threaten the buffet of brine flies and brine shrimp upon which millions of waterbirds, including phalaropes (in flight), feast. Photo: Mary Anne Karren

Utah’s leaders and advocates are mobilizing to save the largest saline lake ecosystem in the Western Hemisphere, a haven for people and migrating birds. Time and water are running out.

Marcelle Shoop first saw the Great Salt Lake in the early 1980s. Thanks to a period of above-average precipitation, water filled the basin to the brim, lapping at the interstate’s edge as she traveled past.

Today that view has dramatically changed. Utah’s famed saline lake and wetlands are disappearing as farms and communities divert the rivers that flow into the basin. Its surface elevation naturally fluctuates but has trended downward for decades. In 2021 the lake’s southern end hit a record low, and this year, it could drop even lower. More than half its volume has evaporated, and in areas the shoreline has receded miles. “You can’t even see the water or get to it in so many places,” says Shoop, now Audubon’s saline lakes program director and a Utah resident. “It’s shocking."

These benchmarks, combined with an ongoing megadrought wringing the West dry, have recently spurred a flurry of new laws, policies, and programs aimed at slowing the decline of the largest saline lake in the Western Hemisphere, a haven for millions of birds representing hundreds of species. Policymakers and environmentalists are racing to stave off a future in which the lake is reduced to a vast, dusty salt flat—creating a wildlife, public health, and economic disaster. “It’s going in that direction,” warns Utah State University limnologist Wayne Wurtsbaugh.

Such an outcome has precedent. Human activities have devastated dozens of saline lake ecosystems, such as Iran’s Lake Urmia, Bolivia’s Lake Poopó, and California’s Owens Lake. In Eurasia, the Aral Sea nearly disappeared following decades of water diversions. As lake levels dropped and salinity spiked, native fishes and fisheries died out. Though some areas have recovered, waterfront villages are now stranded in the desert and ships are abandoned in sand.

Early this year Utah Governor Spencer Cox signed a legislation package to galvanize necessary changes. One new law earmarks $40 million to bolster the Great Salt Lake watershed, an effort the state in June awarded to Audubon and The Nature Conservancy to lead. This money, Shoop says, could be used to acquire or lease water rights upgrade water distribution systems, improve lake hydrology by restoring habitat, and shade canals to reduce evaporation, for example. Another law gives the state five years and $5 million to create a water budget that better accounts for how much water flows into the lake, how much can be sustainably diverted, and how that will change as climate patterns shift.

But putting money to the problem hardly makes the lake’s recovery a slam dunk, says Wurtsbaugh. What’s needed most, he says, is more water flowing in. That makes it imperative that people use less.

What’s needed most is more water flowing in.

Currently, Utah’s residents use more water than just about anyone else in the world—a daily average of 168 gallons per person in and around homes—and its population may nearly double by 2065. The state is now considering ways to promote conservation and meet future demand. But agricultural land still uses up a larger water share, and until recently, farmers could be penalized for using less under a “use it or lose it” system, says Utah State Rep. Joel Ferry, who farms acreage abutting the lake’s wetlands.

That changed in March with a law allowing farmers and landowners to leave water in rivers without losing future water rights. It also set up a market so one party—perhaps an environmental group or duck hunting club—can lease that water share, ensuring it reaches the lake. “Water going to Great Salt Lake is now recognized as a beneficial use,” Ferry says. “That’s a huge paradigm shift.”

Those benefits are expected to trickle down to habitats needed by birds like Eared Grebes, American White Pelicans, and Snowy Plovers. Its water is generally too salty for fish but teems with protein-rich brine shrimp and brine flies that birds feast upon. Migrants visit other saline lakes in the arid West, such as Lake Abert and Mono Lake, but the Great Salt Lake is the largest site—what Shoop calls a centerpiece of this wider network. 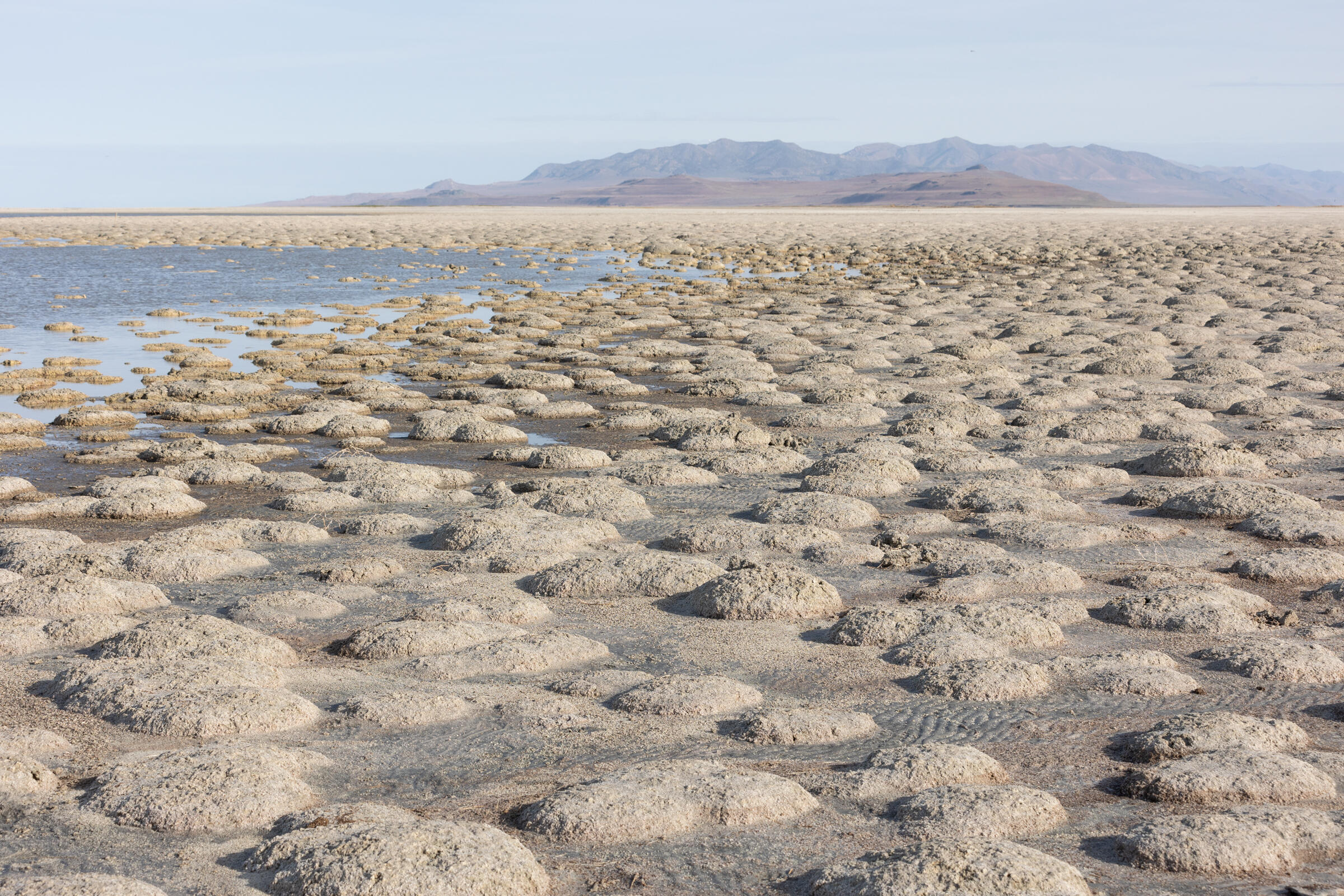 Square miles of the Great Salt Lake's reef-like structures called microbialites are dying due to historic low water levels, raising concerns for invertebrates that feed on their algae—and the birds that eat the invertebrates. Photo: Mary Anne Karren

Though facing a challenged future, Great Salt Lake has at least one factor in its favor that other disappearing habitats perhaps didn’t. Whereas Owens Lake, for instance, dried quickly and quietly in the remote Sierra Nevada, the plight of Great Salt Lake is evident to, and directly affects, millions of nearby residents.

“Maybe that will be one of the things that saves it, in an odd, circuitous way,” Wurtsbaugh says. The basin’s economy—estimated at $1.7 billion annually, which includes activities like tourism, birding, and hunting—could wither if feeder streams aren’t more sustainably managed. Experts also warn that toxic lakebed dust, kicked up by wind, will create a growing air pollution health hazard.

What’s clear: If Utahns don’t take collective action, costs associated with a dry lakebed will be far greater than the costs of mobilizing to protect the lake. “It’s not too late,” Shoop says, “and if we start doing these things now, then potentially we can turn this trajectory around."

This story originally ran in the Summer 2022 issue as “Too Big to Fail.” To receive our print magazine, become a member by making a donation today