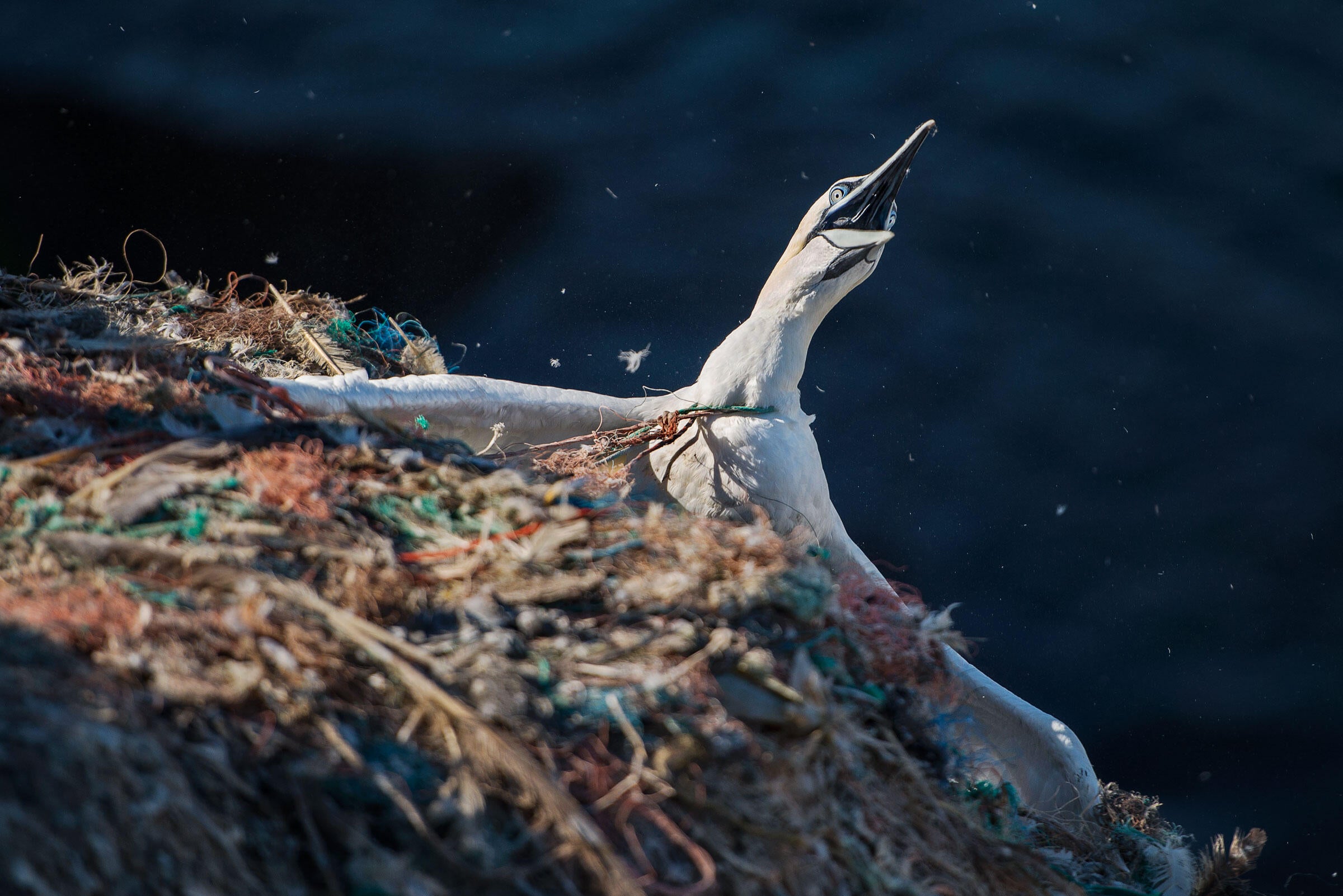 This Northern Gannet, hanging by off a cliff on Grassholm Island, was one of 50 birds rescued in 2015. The seabirds have incorporated plastic waste, instead of the usual seaweed or kelp, into their dome-shaped nests, piling on more trash when they reinforce the structure each breeding season. Photo: Sam Hobson

Without human intervention, dozens of the magnificent seabirds would starve to death at their nesting site each year.

By Alisa Opar and Sam Hobson

By Alisa Opar and Sam Hobson 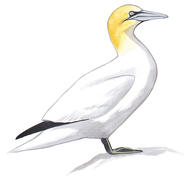 By mid-October, most of the tens of thousands of Northern Gannets that inhabit Wales’s Grassholm Island each breeding season have departed for their wintering grounds. But some stragglers can’t set out to sea: They’re tethered to the island by trash. The birds that breed on Grassholm, the fourth-largest Northern Gannet colony on the planet, line their nests with discarded monofilament fishing line and other plastic garbage that they mistake for seaweed, and hundreds of birds become ensnared each year. To give the captives a fighting chance, a small crew visits the tiny island every fall to free as many gannets as possible.

Grassholm, which is off-limits to the public, has no dock, so the rescuers’ aluminum-hulled boat lurches in tempestuous waters as they disembark onto slippery rocks. “The smell hits you before you even land,” says Greg Morgan, a warden with the Royal Society for the Protection of Birds, who leads the annual rescue mission. “Thirty-six thousand pairs of seabirds equals a lot of guano.” Once ashore, Morgan and his team of volunteers pass through the colony, cutting gannets loose, which can take 30 seconds to 10 minutes per animal, depending on how entangled it is. So far, they’ve freed nearly 600 bound birds in 12 trips to the nine-hectare island, which is located eight miles off Wales.

In recent decades, gannets have deposited some 20 tons of plastic on Grassholm, likely collected from the mass the Gulf Stream dumps off the United Kingdom’s western coast. (The world’s largest gannet colony, on Bass Rock, off the eastern coast, doesn’t suffer the same fate.) Clearing the garbage interwoven into nearly every nest isn’t an option, as it could cause a mass colony desertion. “Plus in all likelihood it would look exactly the same within 10 years,” says Morgan.

Most of the 30 to 100 victims rescued each year get a leg or wing tangled as a chick, the ligature tightening as it grows. “In some extreme cases, the leg falls off,” says Morgan, who releases one-legged gannets just like the other captives. “It is otherwise healthy, so it deserves a shot at survival.”

In 2015, when these photos were taken, the team rescued 42 juveniles and 8 adults. They were too late to help 32 birds that had starved to death, and likely dozens more whose remains had already decomposed. The losses are unfortunate, says Morgan, but he won’t risk visiting the island earlier and disturbing the massive colony of breeding birds. 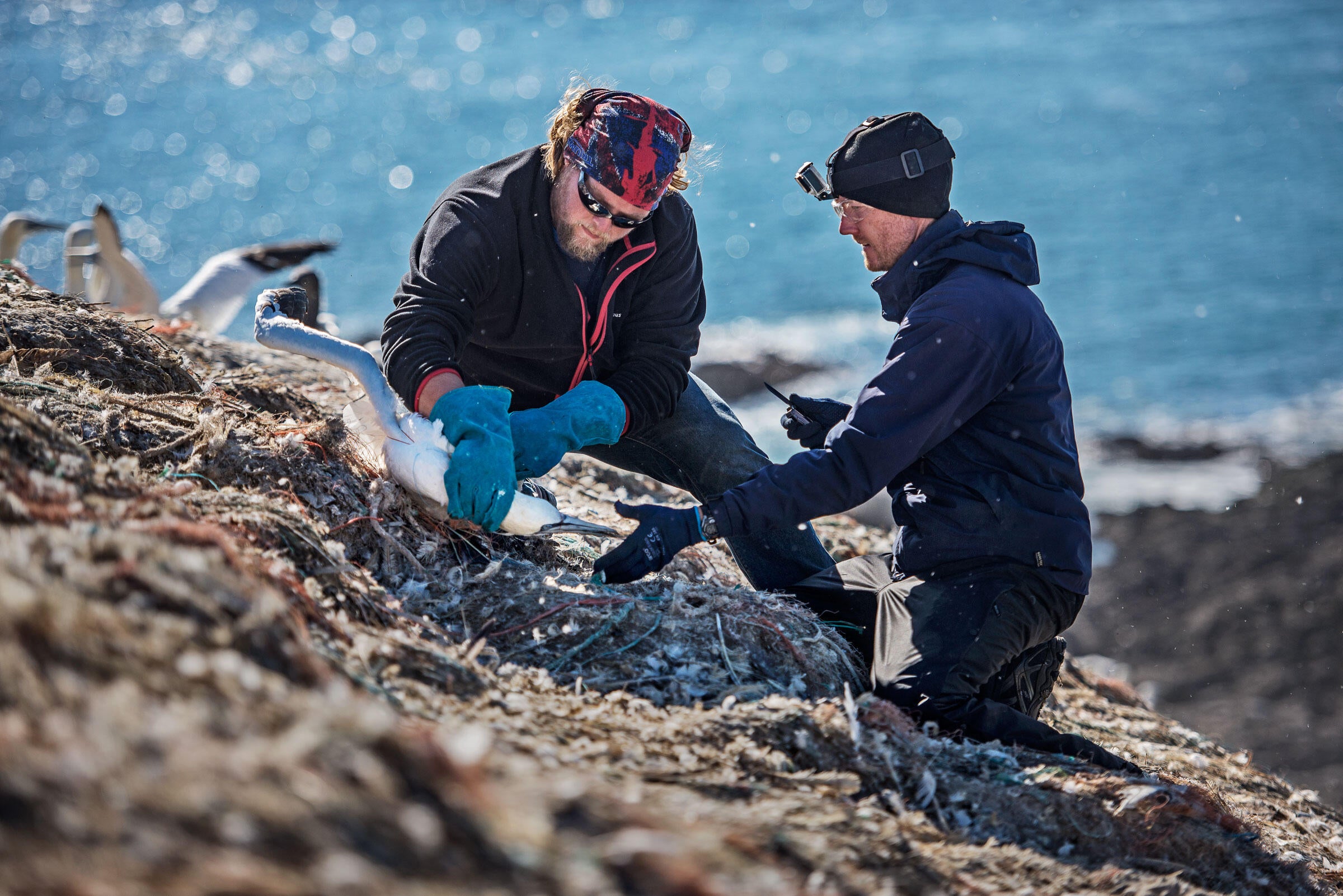 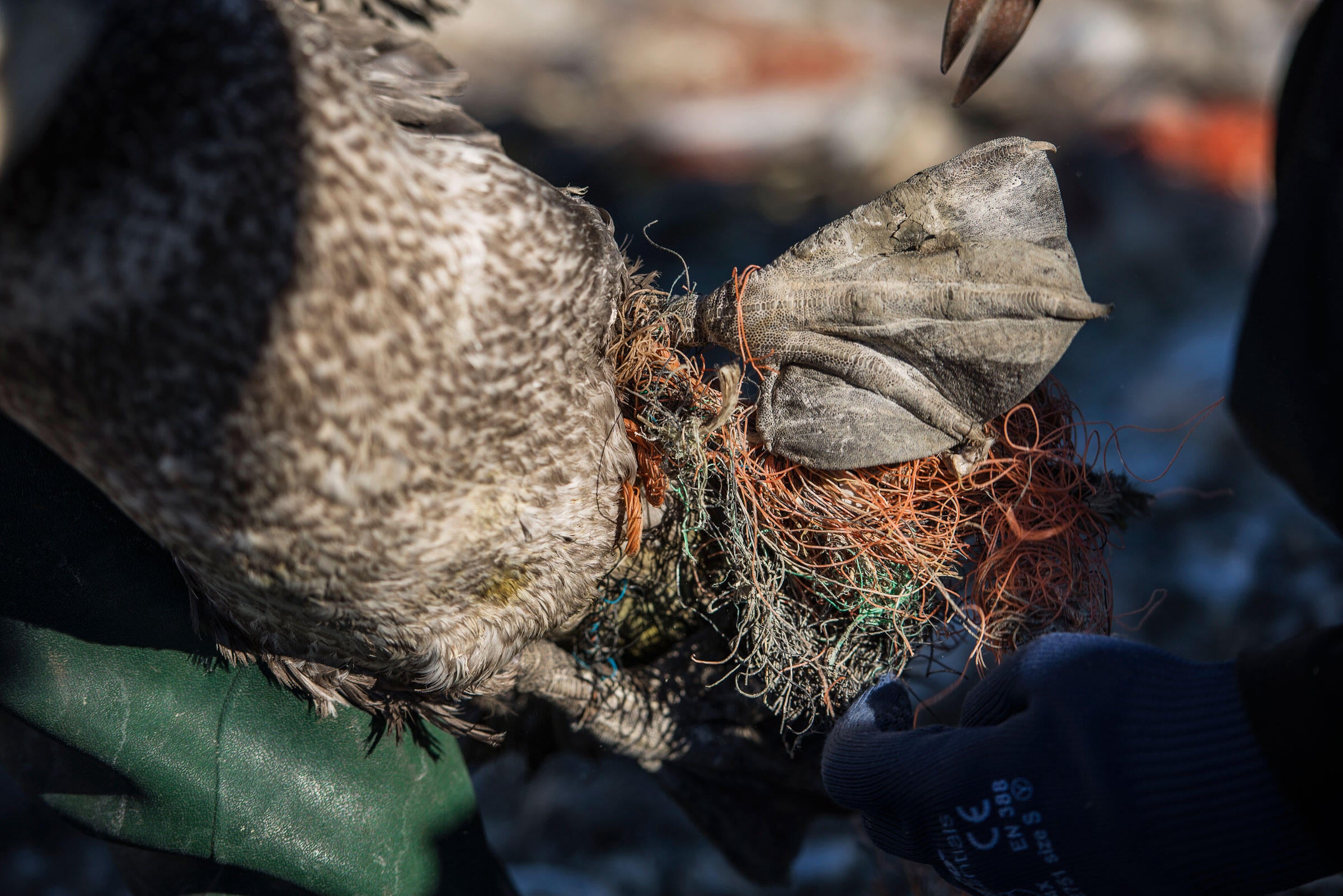 The foot of a young gannet has become entangled in a mass of plastic fibers; in extreme instances, the trash can cause foot or wing deformities, and even sever the limbs. Photo: Sam Hobson

While declining fish stocks and warming seas are taking a toll on some seabird species, gannets are largely thriving, thanks to their ability to dive 70 feet deep and exploit a broad variety of food sources. Morgan acknowledges that a “couple hundred” trash-related deaths each year isn’t going to put a dent in Grassholm’s colony, much less the global population, and yet he’s compelled to return each year. “It is not easy to think of these birds suffering on one of our reserves,” he says.

RSPB, which owns the island, generally focuses on conservation, not animal welfare. The group makes an exception in this case, says Morgan, because the birds are suffering as a direct result of human actions, and saving them could help draw attention to the dangers of marine litter. The waste comes from the fishing industry tossing broken nets overboard, shipping companies allowing materials to blow off deck, and the overall proliferation of plastic products.

“None of these issues are going to be fixed by a small band of conservationists battling our way out to Grassholm in October storms to cut free a few gannets,” says Morgan. “But hopefully the final answer is greater than the sum of its parts, and we can highlight the issue to enough people to maybe, one day, make a small difference.” 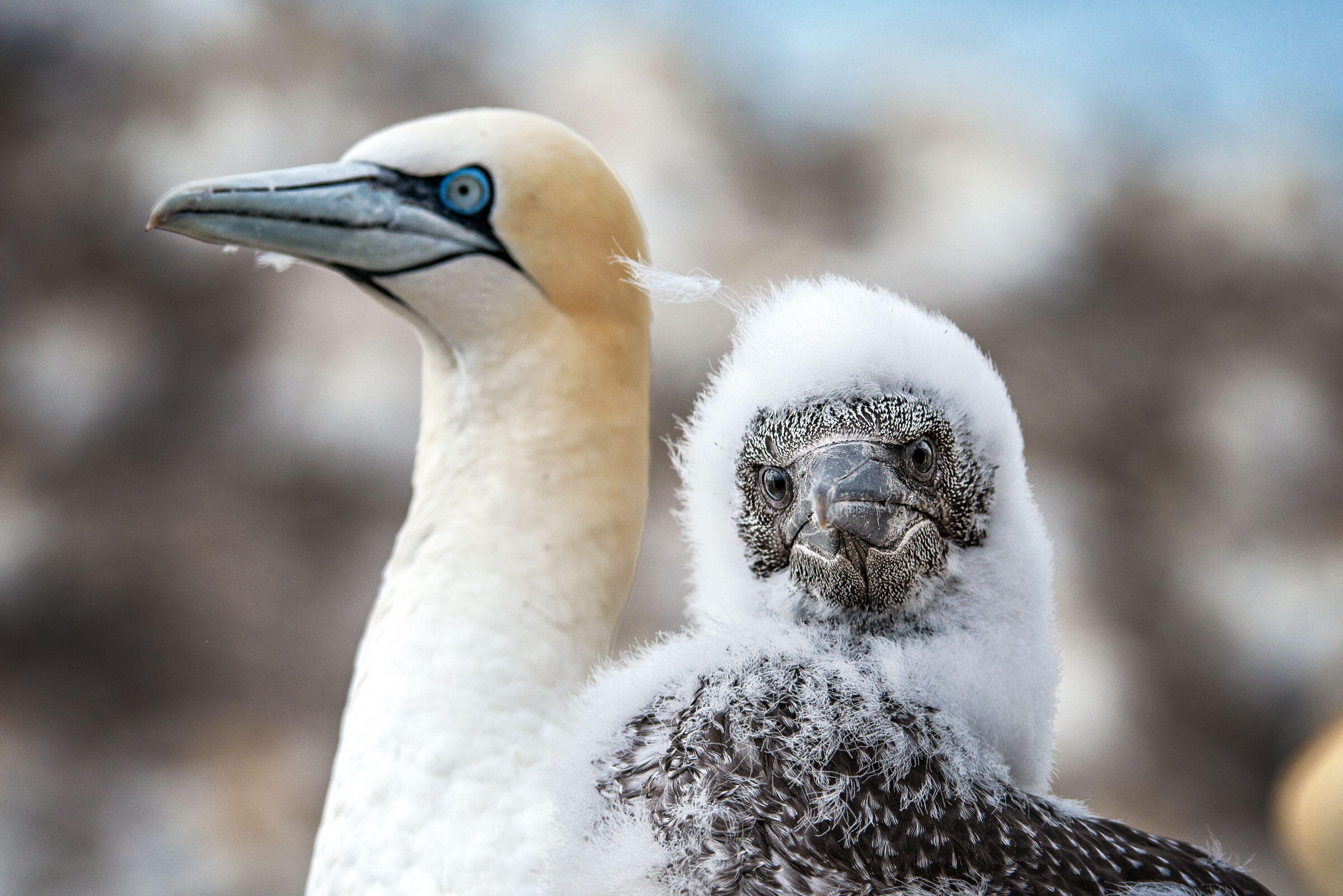 Most of the birds rescued are fledglings that were inadvertently lassoed as chicks and then experienced the ligature around their wing or foot tightening as they grew. Photo: Sam Hobson 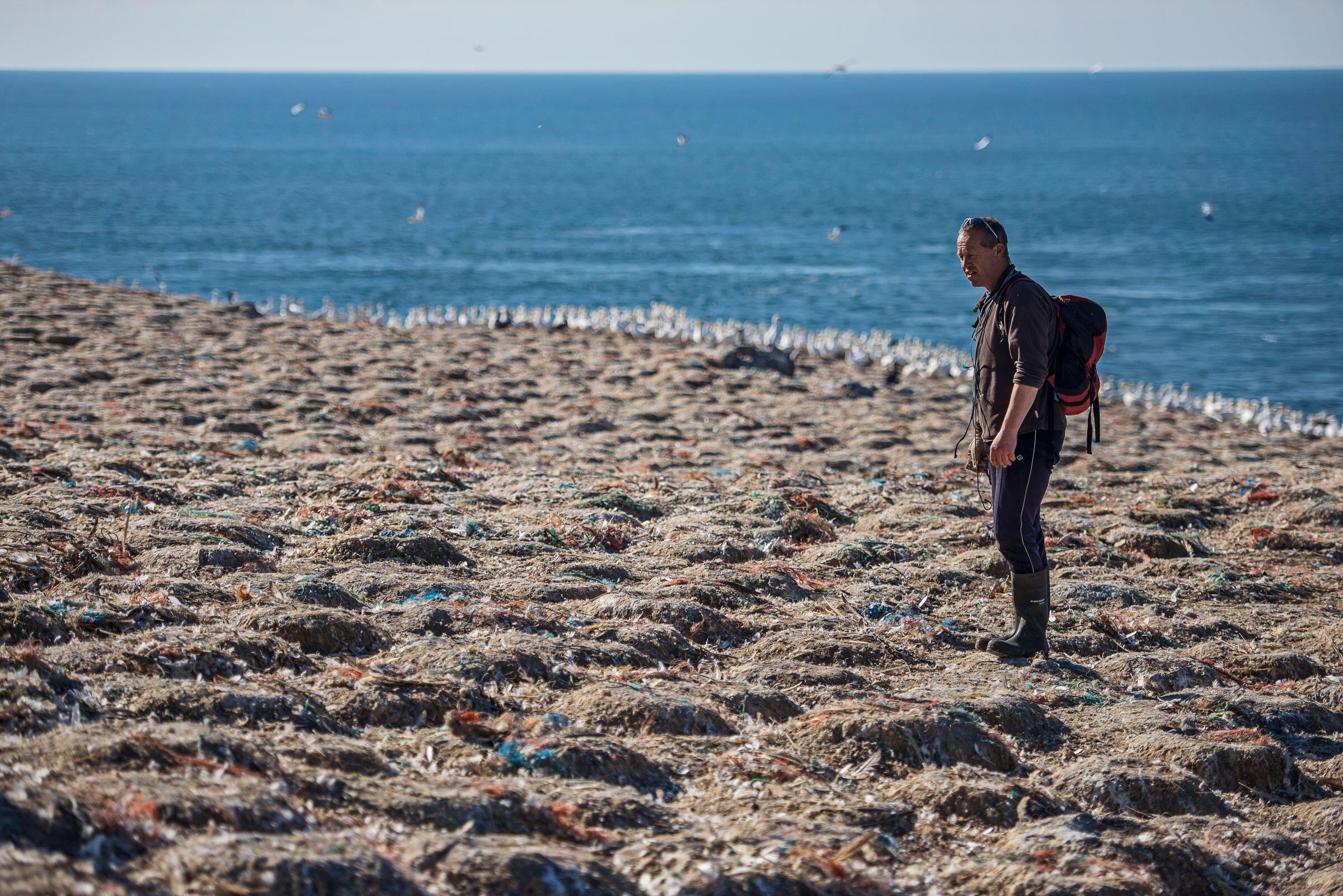 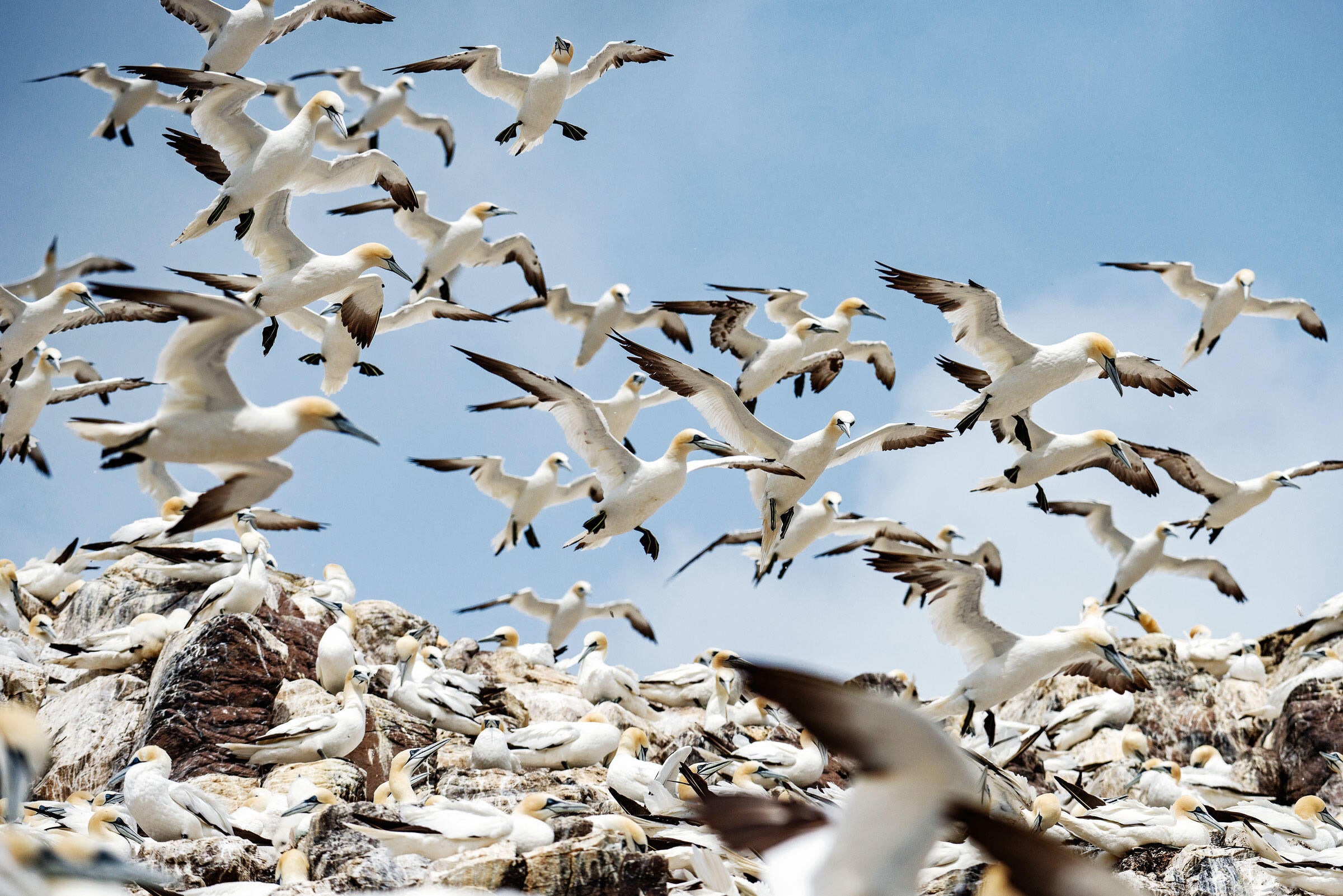 Globally, Northern Gannet populations dropped drastically during the 19th century due to hunting of eggs and adults. Thanks to protections, the birds recovered in the 20th century, and their numbers continue to grow today. Photo: Sam Hobson