As Oil Companies Dig Into Yasuní National Park, Ecuadorians Are Fighting Back

Considered the most biodiverse place in the world, the Yasuní is in danger of being ruined through the exploitation of its natural resources. And time is running out to save it.

The most biodiverse park on the planet can be a very noisy place—especially around sunset, when day-shift creatures cede the rainforest to those who roam and serenade the night. But on a late afternoon in April, the trails near Yasuní National Park’s Yasuní Scientific Station are jarringly quiet.

In a half day of hiking the muddy trails near the station, we see a few lizards and snakes, and a fast-moving troop of squirrel monkeys, but only a handful of the 610 bird species that have been catalogued within the park’s borders.

“Only a few years ago, the wildlife here was amazing,” says my hiking partner, Ecuadorian biologist and nature photographer Rubén D. Jarrín. But new roads and oil pipelines keep cutting deeper into this fragile wonderland, disrupting the movements and life cycles of everything from canopy-dwelling birds to ground-prowling jaguars. As seismic surveys pinpoint new pockets of oil in the park’s pristine core, wildlife lovers in Ecuador and around the world are rallying to save this UNESCO Biosphere Reserve—and the densely connected web of people, plants, and animals living within it.

Jarrín and I spent the previous day driving to Yasuní from Quito, Ecuador’s high-mountain capital. We climbed first into the treeless páramo, then threaded our way between active volcanoes, descending for hours through ghost-lit cloud forests. The dense pink fog finally parted, revealing a tremendous expanse of river-veined rainforest beneath us, stretching to the eastern horizon and two thousand miles beyond.

Biologists have identified the Yasuní area, located at the rain-drenched intersection of the Amazon, the Andes, and the equator, as potentially the most biodiverse place on Earth. Whereas much of the Amazon basin is flat, with relatively infertile soils, the low hills of this region host countless microclimates and are layered with dark, volcanically enriched soils.

In a single hectare of land here, botanists have identified 655 species of trees, more than in the United States and Canada combined. The ever-expanding inventory of fauna at Yasuní includes 173 mammals and more insect species than in any other forest on the planet. Sightings of globally threatened mammals like the giant anteater and pink river dolphin are fairly common. A lucky birder might make a once-in-a-lifetime sighting of a Rufous-vented Ground-Cuckoo or an Agami Heron. There are bats that catch fish; giant anteaters and otters; and a frog whose translucent skin allows an x-ray view of its internal organs.

“If we can’t manage to protect places that are this important,” says Kevin Koenig of Amazon Watch, “then it seems unlikely that we’ll be able to protect the rest of the planet.”

The stakes here are even greater than the preservation of biodiversity, and they extend far beyond the patch of land itself. In order to stave off the worst impacts from a changing climate, scientists say, most of the planet’s remaining fossil fuel resources will need to remain underground. The Amazon forest, as the world’s largest carbon sink and its largest watershed, is crucial to mitigating runaway climate change. The northwestern Amazon, where Yasuní is located, boasts the basin’s highest biodiversity and is considered the most likely region to maintain wet rainforest conditions. As anticipated climate change–induced drought intensifies in the eastern Amazon, this area could serve as a critical biological refuge for displaced species.

“If we can’t manage to protect places that are this important,” says Kevin Koenig, Ecuador program director for Amazon Watch, “then it seems unlikely that we’ll be able to protect the rest of the planet. Depending on what happens here, we could be at the beginning of what could turn out to be a very tragic story.”

Once Jarrín and I landed in the Andean foothills, we drove for two hours along corrugated roads north of the Napo River, the largest of Ecuador’s Amazon headwaters. Here, the denuded landscape is pocked with chemical settling ponds, jumbles of roadside oil pipelines, and get-drunk-quick oil towns like Coca, Pompeya, and Lago Agrio (Bitter Lake, named after the former Texaco headquarters in Texas).

Ecuador’s president, Rafael Correa, rode to his 2006 election in part on a wave of national outrage over the legacy of foreign oil companies’ pollution of the nation’s rainforests. The fiery Correa—a sort of Hugo Chávez lite with a showman’s flair—recruited Hollywood activists for a “dirty hands” media campaign in support of the small nation’s long-running legal fight against ChevronTexaco, which had dumped 18 billion gallons of toxic waste in the rainforest north of Yasuní. Pledging to throw the gringos out, Correa promised that Ecuadorian control over oil production would protect the Amazon’s land and people.

Indeed, the newer, tidy-looking oil infrastructure south of the river seems like a great improvement over the dead landscapes to the north. That’s in part because rules and methods have evolved since the anything-goes days when the northern oil fields were developed—and in larger part because the oil operation (a joint venture led by Spain’s Repsol) so tightly restricts access to this area, which it calls Block 16.

Most of Block 16 overlaps a reserve that in 1990 was carved out of Yasuní National Park for the Waorani people, Amazonian Amerindians who are ethnically and culturally distinct from other ethnic groups in Ecuador, and who speak a language that’s unrelated to any other known language. Waorani leaders successfully fought for a homeland to protect their culture and lands from settlers, logging, and oil exploitation. After the reserve was created, though, some Waorani leaders made controversial deals that brought oil drilling to the territory.

Now only oil workers, Waorani residents, researchers, and others willing to jump through significant bureaucratic hoops are allowed to enter, via a ferry terminal that is protected by razor wire and armed guards. This has slowed the rate of colonization and deforestation, and has reduced impacts from hunting. 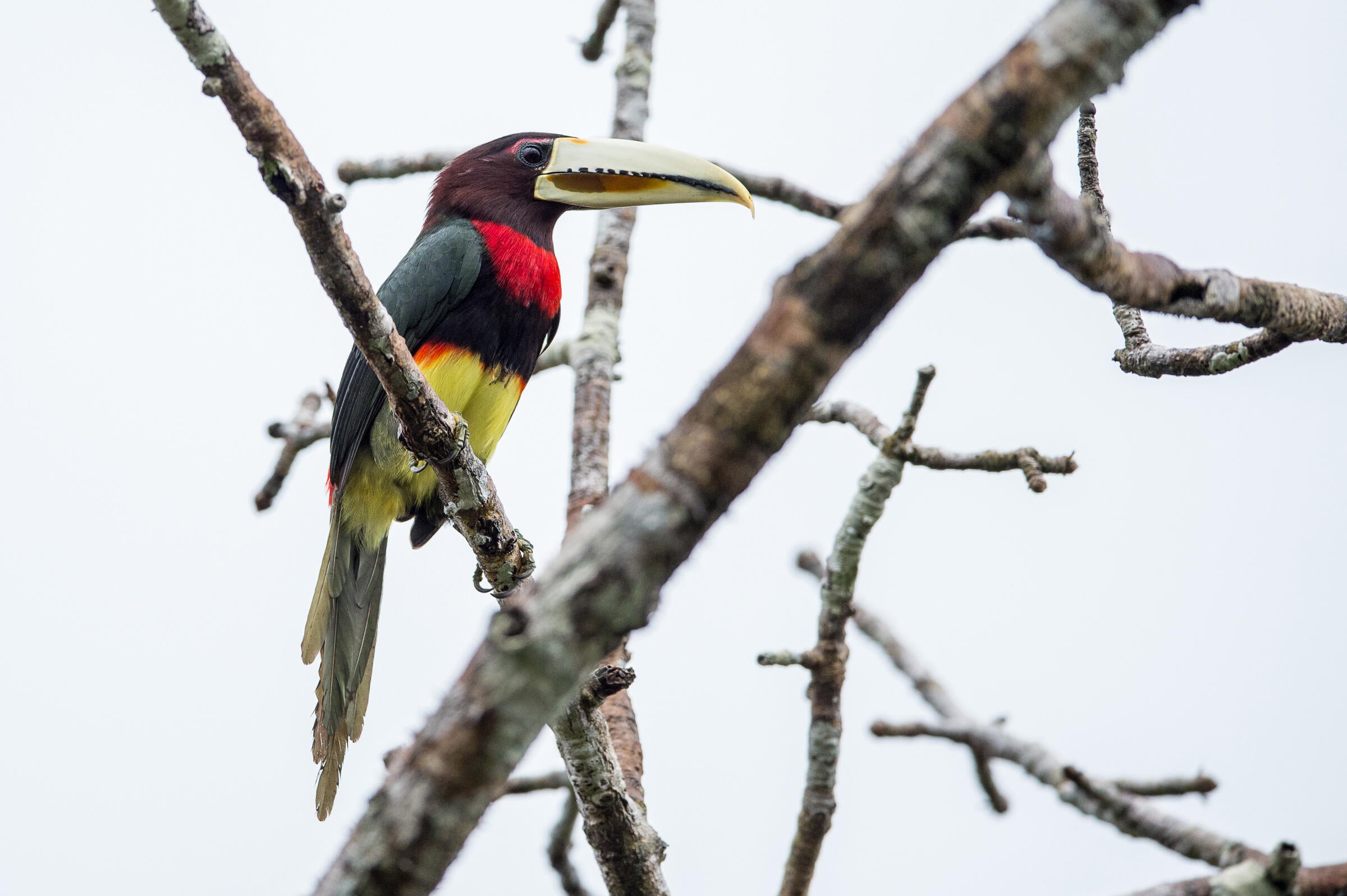 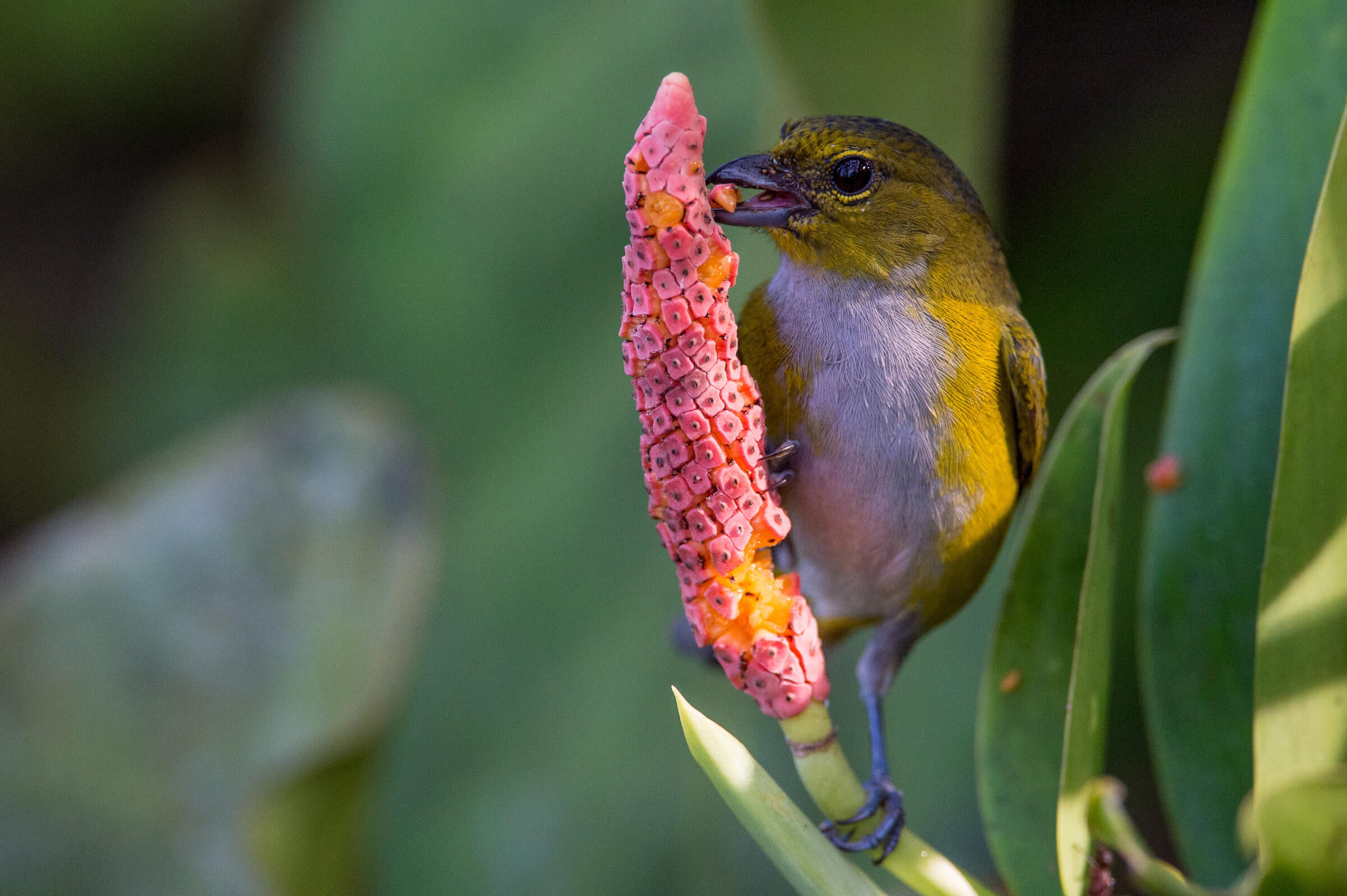 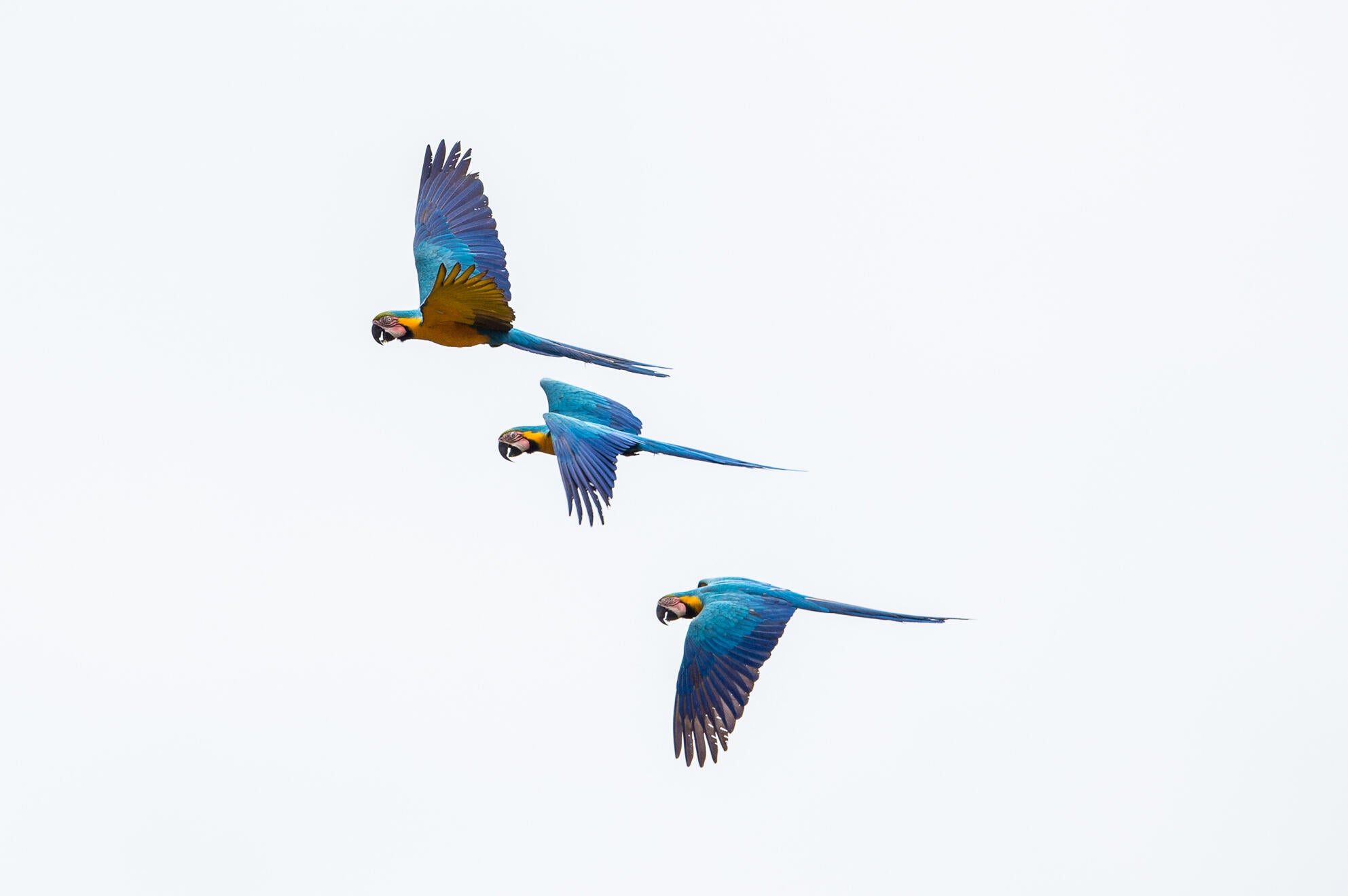 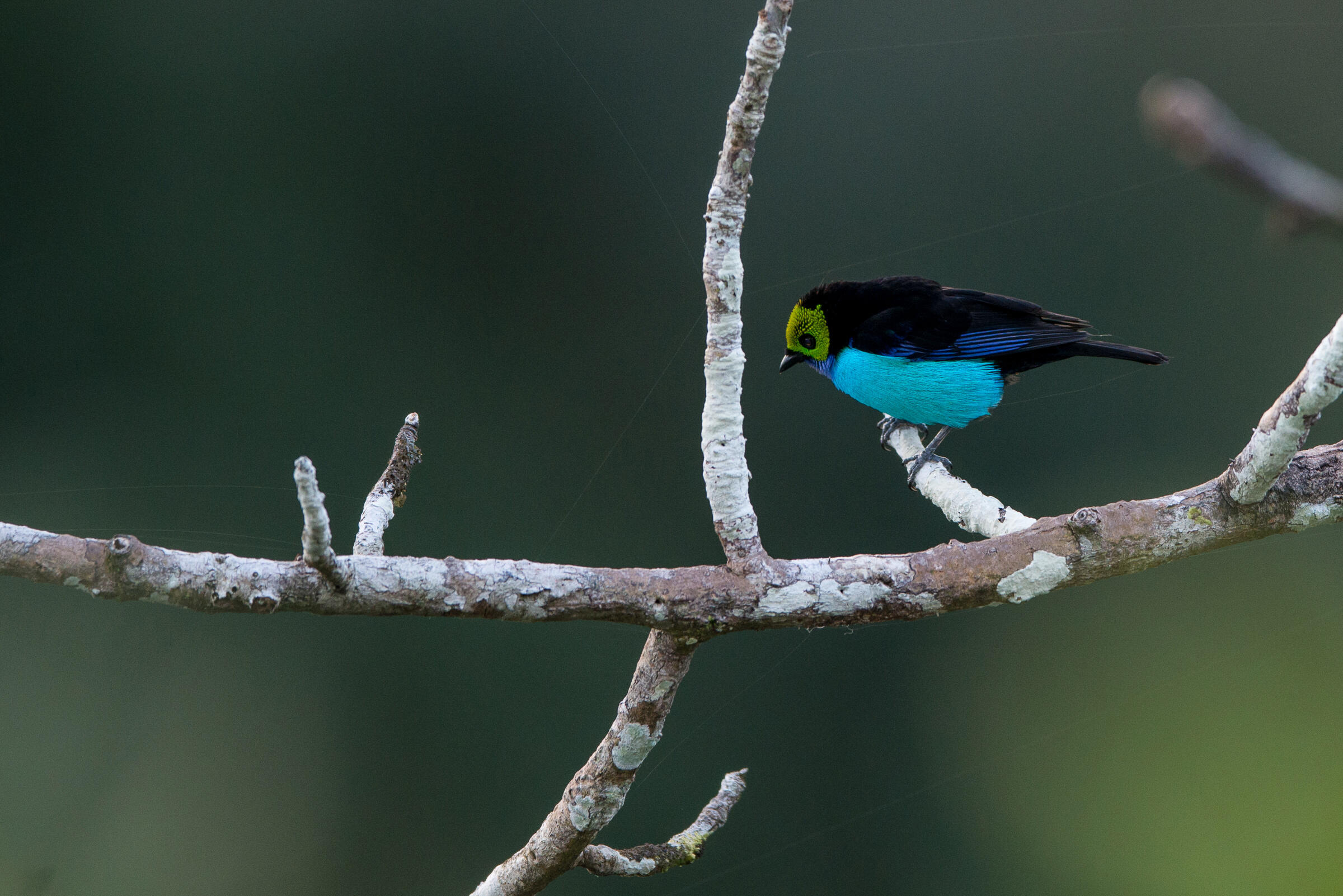 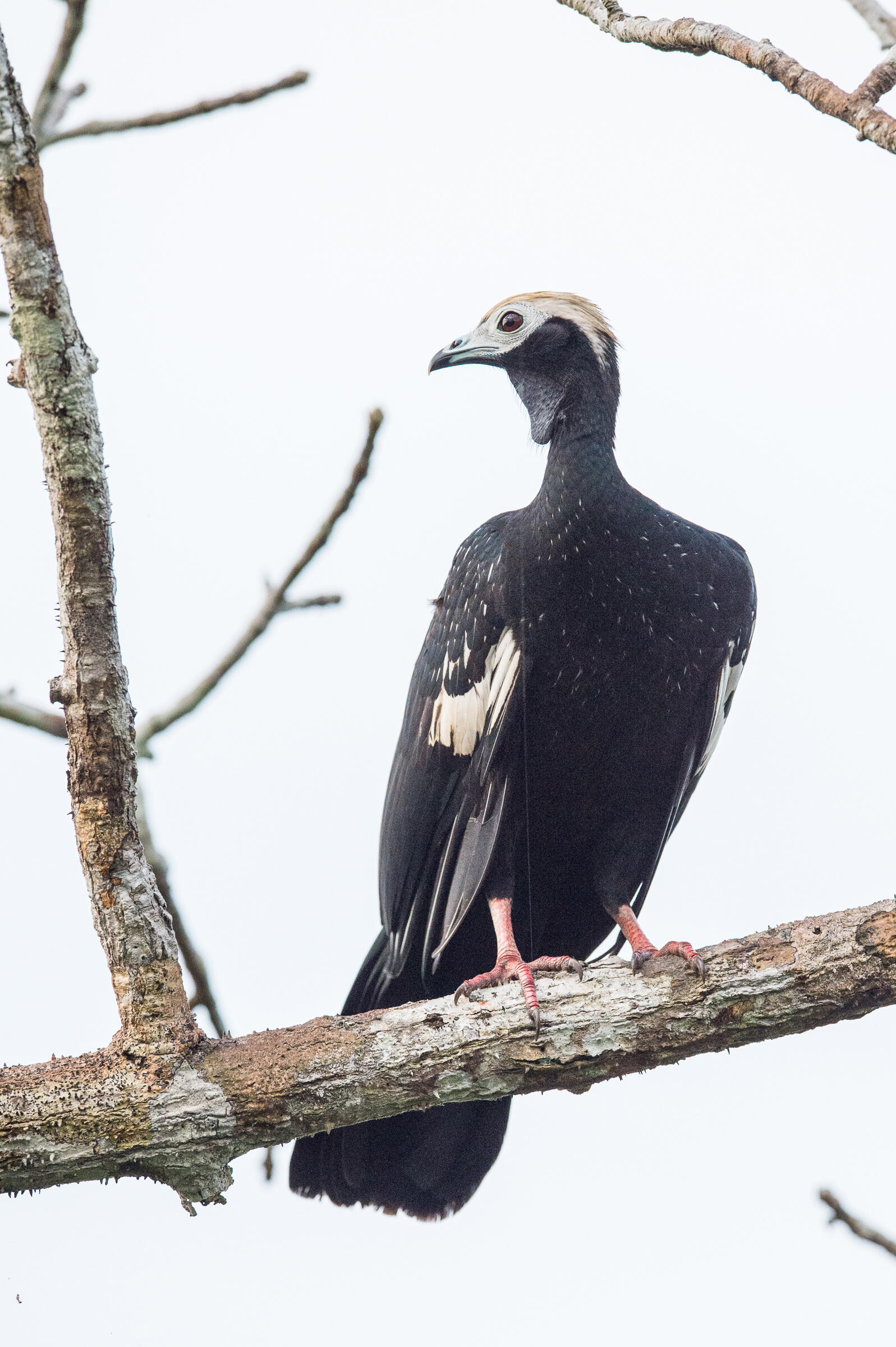 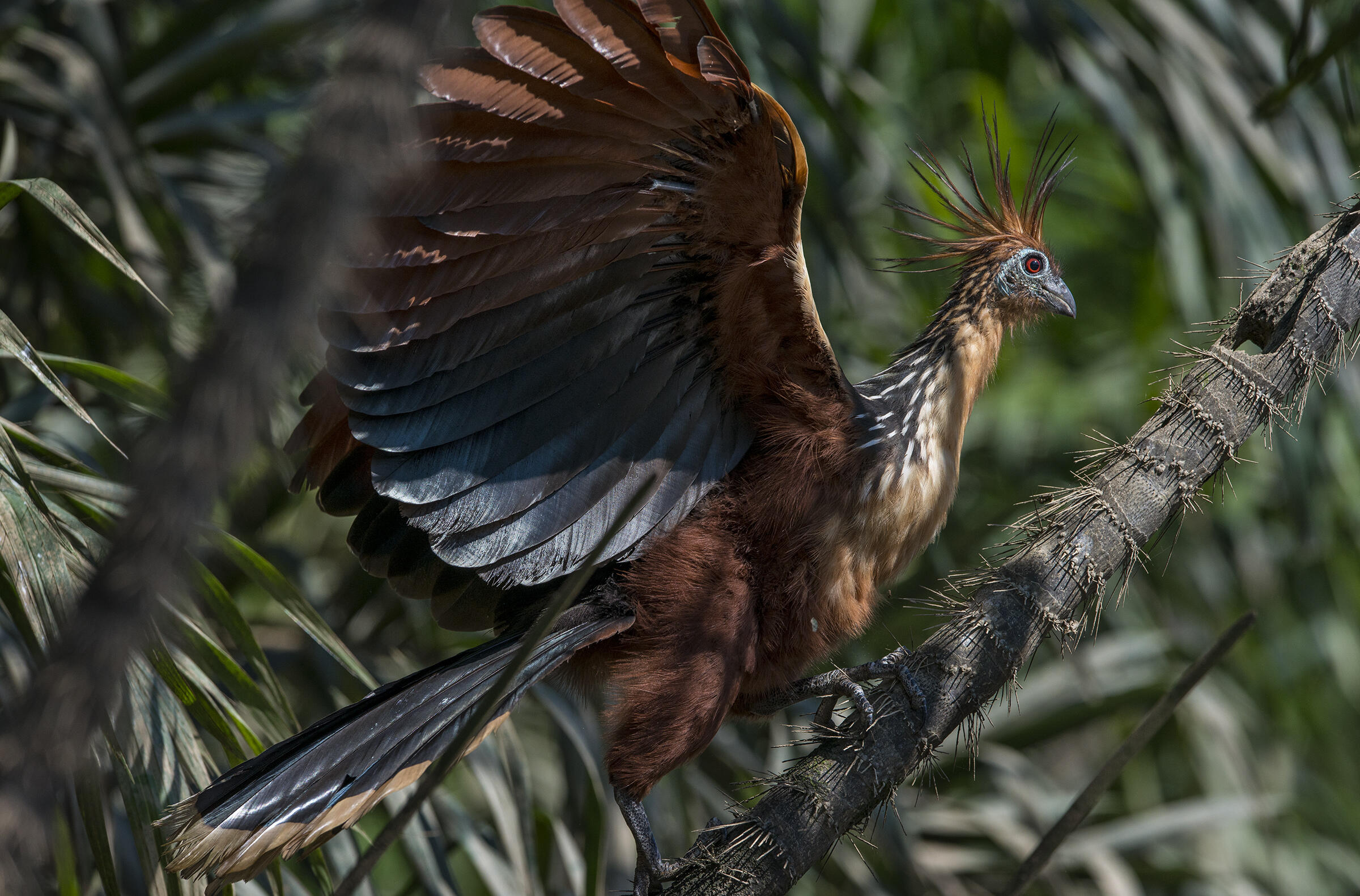 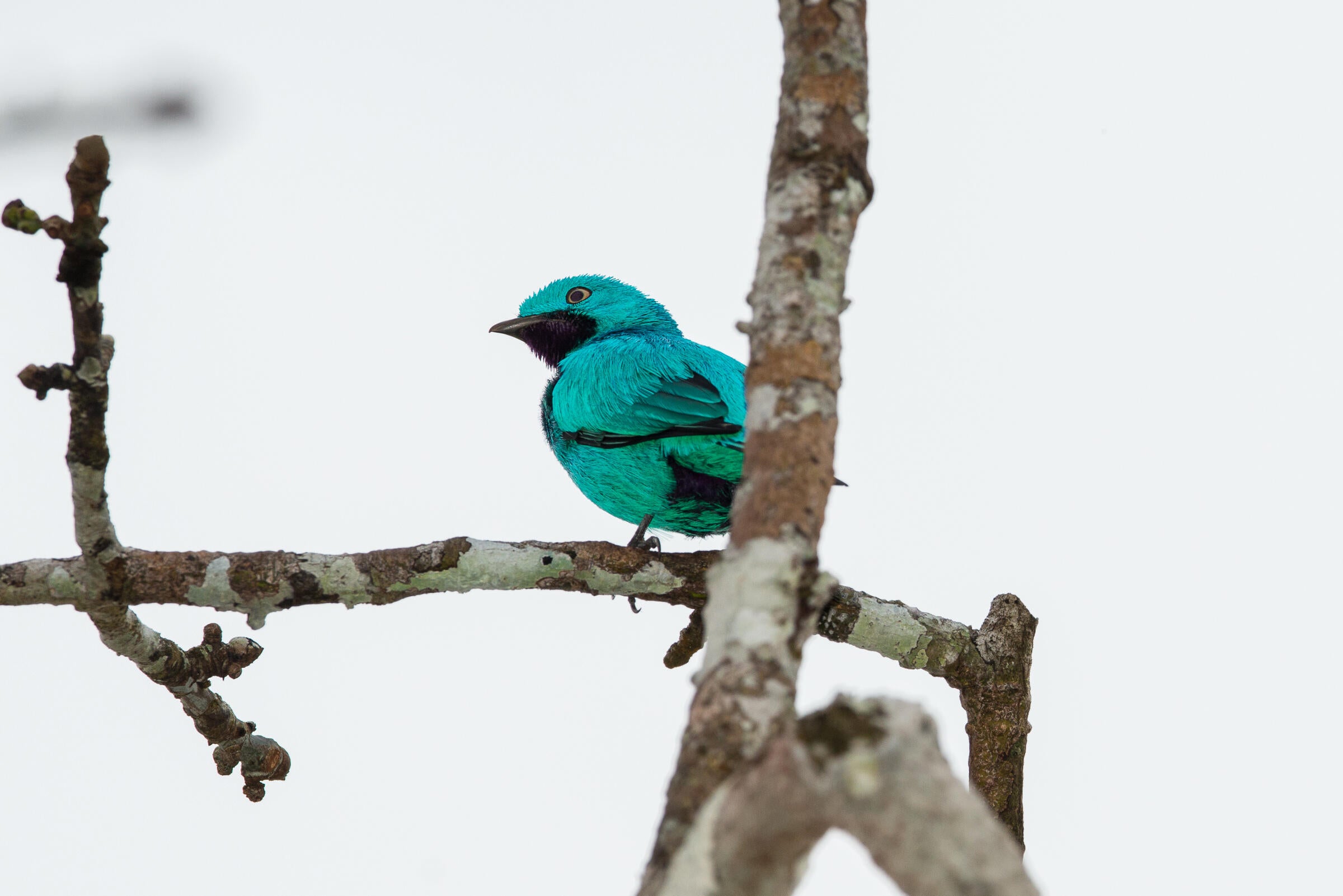 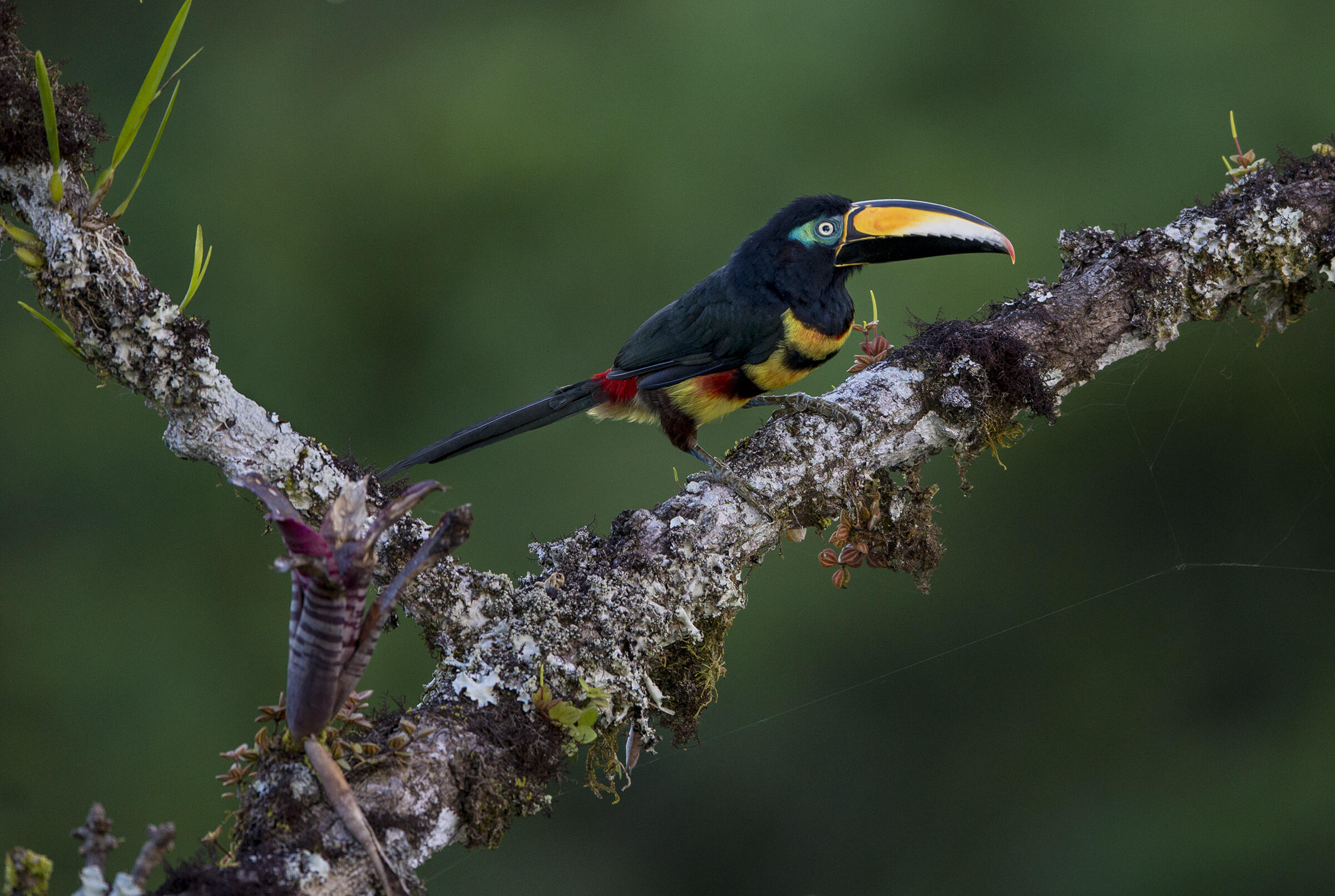 “It has slowed the impacts, but it hasn’t stopped them,” says Juan Carlos Armijos. Over the eight years that he has worked at the Yasuní Scientific Station, which is run by Quito’s Pontificia Universidad Católica del Ecuador (PUCE), Armijos has developed close ties with the Waorani, who until recently hunted with spears and blowguns and lived seminomadic lives. Now most Waorani have settled in roadside communities, and many use oil-company cash to buy guns. As a market for bush meat, feathers, and exotic pets has developed, wildlife in the forests near the roads has declined noticeably.

Armijos brings me to the village of Guiyero, which he helped to outfit with school classrooms, a computer lab, and a now-defunct fish-farming project. We meet Bogui Ahua, who shows us his pet Blue-and-yellow Macaw—one of many captive birds around the village. Nearby, a woman crouches over a fire outside her concrete-block house, burning the hair off the hind leg of a peccary that her husband shot that morning.

“In the old days, we would sing and dance when we had a peccary to eat,” says Guiyero chief Wampi Humberto Ahua. He wears a headband of braided palm leaves, a necklace of jaguar teeth, and businesslike leather loafers as he speaks in the Wao language, which his nephew translates into Spanish. “We fought to defend our territory, but usually we just traveled and hunted. It was a calm life, mostly.”

About 40 years ago, when Ahua was a boy, a helicopter dropped off a missionary. “One of our men came to the village and said, ‘We have a new friend.’ But before we got there, the others had killed him where he landed.” The next missionaries got a warmer welcome, “but since then our culture has declined,” the chief says. “A few years ago some people gave us money to sign something in Spanish. Then the oil came. Now it’s more difficult to find a forest with animals.”

Though the Waorani have been pulled halfway into the modern world, Yasuní’s two uncontacted tribes, the Tagaeri and Taromenane, continue lifestyles that have changed little since the Stone Age. “We know as little about them as they know of us,” says Enrique Vela, Ecuador’s former director of human rights for indigenous people. Most estimates put the number of uncontacted tribespeople between 80 and 300, though their population is declining as a result of asynchronous feuds with the Waorani, whose new tools allow them to more efficiently hunt and carry out the cycles of revenge that have defined tribal relations in the western Amazon for thousands of years.

Expanding oil exploration and production in Yasuní have bumped up tensions and conflict between indigenous groups over territory and resources. Though the government has delineated a no-entry “untouchable zone” for the people living in voluntary isolation, it has allowed oil surveyors to enter, and it approved plans for oil platforms at the boundary, squeezing the Tagaeri and Taromenane into an increasingly smaller patch of land.

With no understanding of the global forces converging around them, the two tribes are thought to be among the least likely of the 90 or so uncontacted peoples on Earth to survive the next decade. “They almost certainly have no idea of the existence of a country called Ecuador, which considers them citizens,” says Vela. They also likely have no knowledge of the cascading series of missteps that have created the environmental and human-rights dramas now coming to a head at Yasuní.

“There are two different realities here in Ecuador,” says Renato Valencia, who directs the Yasuní Forest Dynamics Project. “There’s the one that is defined by the law, and there’s what’s actually happening.”

Ecuador’s current constitution, ratified in 2008, protects the rights and cultures of indigenous people living in voluntary isolation. A more well-known clause recognizes nature itself—described by the Quichua term Pacha Mama—as an entity with legally enforceable rights, and forbids the extraction of non-renewable resources in protected areas.

The Chinese, with more oil than they can use, are reselling most of it to the United States. Activists hope that the Amazon oil will someday be stigmatized like Canadian tar sands oil.

Environmental and human-rights activists around the world celebrated the Ecuadorian constitution’s groundbreaking poetry. But at home the difficulties of applying it soon became apparent, most dramatically at Yasuní. The most awkward issue is that of agency: Who speaks for the trees?

Shortly after his election, President Correa threw his support behind an audacious and unprecedented proposal: Ecuador would shelve a plan to extract an estimated 920 million barrels of oil inside a pristine and ecologically sensitive eastern tract of Yasuní known as the ITT Block (named for the Ishpingo, Tambococha, and Tiputini oil fields). In exchange for preserving the internationally important wilderness and preventing millions of tons of carbon emissions from entering the atmosphere, Correa asked the developed world to ante up $3.6 billion, roughly half of the then-estimated oil revenues the country would be forsaking. 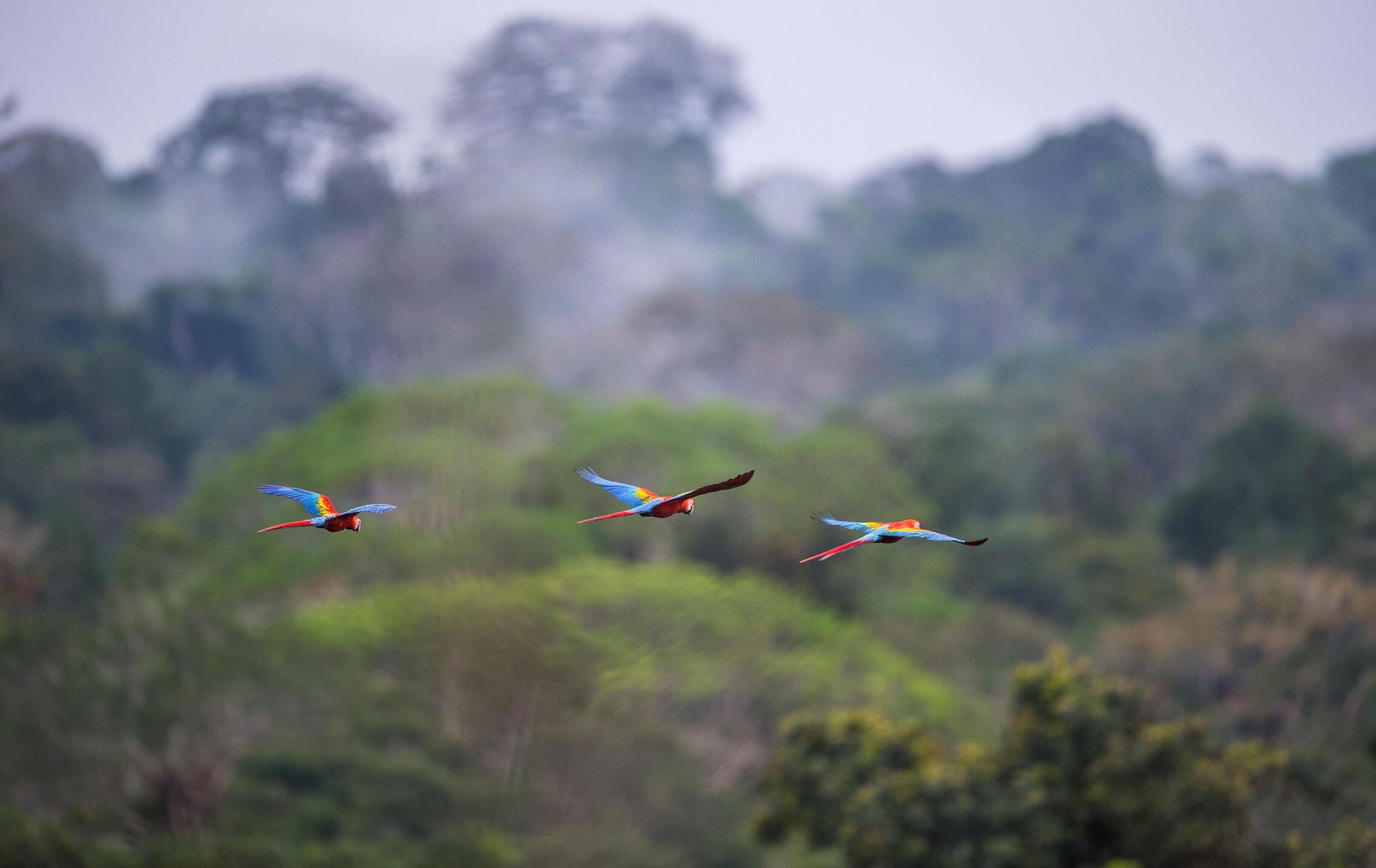 Scarlet Macaws rise over the jungle at the Tiputini Biodiversity Station. Photo: Neil Ever Osborne

Environmentalists held up the plan as a prototype for an exciting new paradigm, one that would reduce the burden of environmental preservation on poor countries as the world took the first steps toward a post-fossil-fuel era. Since then, proposals for “Yasunízation”—as pay-to-preserve initiatives have come to be known—have proliferated around the world, from New Zealand (coal) to Nigeria (tar sands), Quebec (gas fracking), and Norway’s Lofoten Islands (oil).

But Ecuador’s plan got off to a shaky start. Though Germany and other European nations quickly threw their financial support behind the ITT initiative, it took more than two years to negotiate the specifics of an agreement with the United Nations Development Programme (UNDP). The agreement specified that the funds, mostly from governments of wealthy countries, would be spent on researching and developing alternative energy and other technology, reforestation and care of protected areas, and social development.