On a winter day during the Revolutionary War, a flock of emerald-green parrots landed on a house in Schoharie, New York, convincing locals the apocalypse had arrived. (A year later, British troops invaded and burned down that exact building.) The birds were Carolina Parakeets, and as the villagers’ shock would suggest, their presence was something of a freak occurrence—one of just three state records of the species from 1780 to the 1930s, when it was declared extinct in the wild. But that didn’t stop New York from being included in the species’ long-accepted range map. In fact, it covered much of the Eastern United States, as if early scientists had drawn a blob around every reported sighting. In one spot, the parakeet’s range even traced the precise borders of Delaware and New Jersey.

It’s that last feature that raised the suspicions of Kevin Burgio, an ornithologist and postdoctoral fellow from the University of Connecticut, in 2013. “I doubt parrots had a high respect for state boundaries,” he jokes. So Burgio decided to reconstruct the real ranges of the two parakeet subspecies: Conuropsis carolinensis carolinensis and Conuropsis carolinensis ludovicianus. He and his team analyzed each historical observation dating back to 1564, scoured travel diaries from hunters and amateur ornithologists, gathered notes from specimens in museum collections, and pruned out suspect evidence. 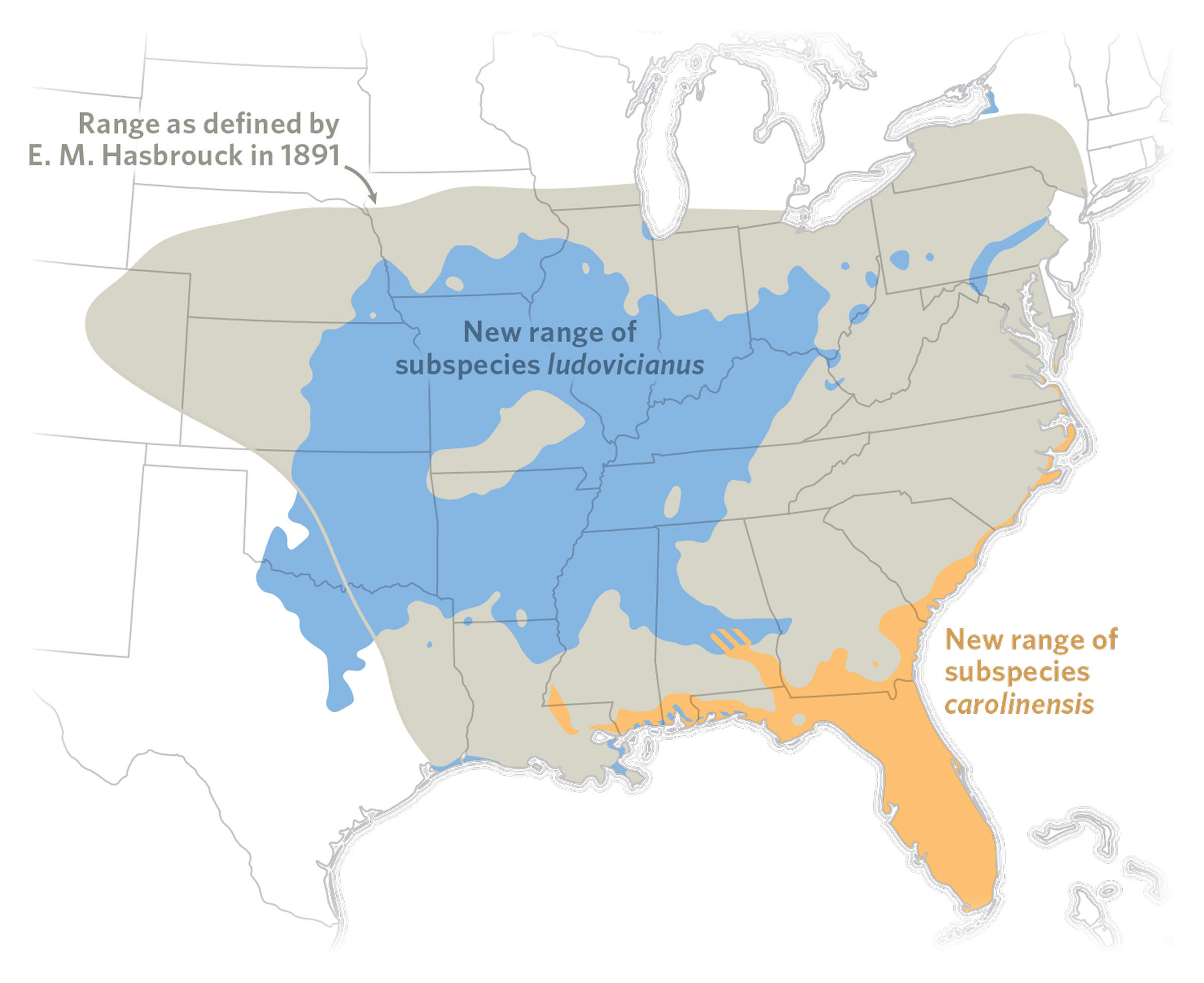 The resulting map was not only narrower, it also revealed that both subspecies had sovereign territories with little overlap. By comparing seasonal differences in every part of the new range to the birds’ wintering and breeding needs, the scientists further concluded that the western subspecies migrated as far northeast as Pennsylvania. As a result, the parrot apocalypse of 1780 is officially a fluke (though the long-gone town of Paroquet, Arkansas, remains on the map).

Burgio’s findings help elucidate why the species died out so rapidly, too: The long-suspected culprits (deforestation, hunting, disease, or some combination thereof) would have had a graver impact on two isolated populations than on a more wide-ranging one.

Now that he’s set the record straight, Burgio hopes his research can inform modern conservation work around parrots, which are the most threatened avian group on Earth. A closer look at the Carolina Parakeet’s range, for instance, may help reveal new niches for species struggling in the tropics. And tracking constrictions in the dead bird’s range over time could point to local land-use changes that are making parrots more vulnerable today.

But the past doesn't always line up with the present, Paul Reillo, the founder and president of the Rare Species Conservatory Foundation, says. His organization conserves Red-browed Amazons and other declining parrots in captivity and in the wild. Reillo believes the world has changed too much for scientists to draw useful ecological lessons from the Carolina Parakeet's history. “It’s not like comparing apples to oranges, but comparing apples to cinderblocks,” he says, adding that the research would be better directed toward current wildlife. “In the extinction crisis we’re facing now, we need to ask hard questions about what we’re doing in science.”

For Burgio, however, the parakeet is worthy of inquiry, simply because it stands for something bigger and timeless. “Ultimately, this research has little to do with extinction,” he says, “and has much more to do with life.”