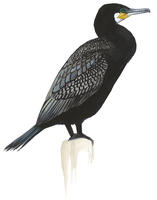 In preparation for his great cormorant assignment, Berlin-based illustrator Martin Haake examined many other John James Audubon paintings to refamiliarize himself with the artist. “He is so great at catching a certain moment in the life of a bird,” he says. The male’s neck—artfully angled toward his family—captivated Haake, who sought to preserve the theater of the quartet while simplifying the scene. “I wanted to focus on just one bird to be a little bit more abstract,” he says.

To assemble the avian patriarch, Haake glued pieces of painted paper and snippets from books and magazines onto an old piece of paper. He then scanned the image into Photoshop and further manipulated the design and colors. Haake tried a version without the bird’s scaly snack, but ultimately decided the morsel should stay. “It’s nicer with the fish,” he says.

In looking at Audubon’s original, it’s easy to imagine the open-mouthed youngsters crying for their share. It would be a natural instinct—Great Cormorants feed entirely on aquatic prey. As Audubon observed, all cormorant species “are expert at tossing up a fish inconveniently caught, a foot or so above their head, and receiving it in their extended gullet.”

This story originally ran in the Winter 2019 issue. To receive our print magazine, become a member by making a donation today.​