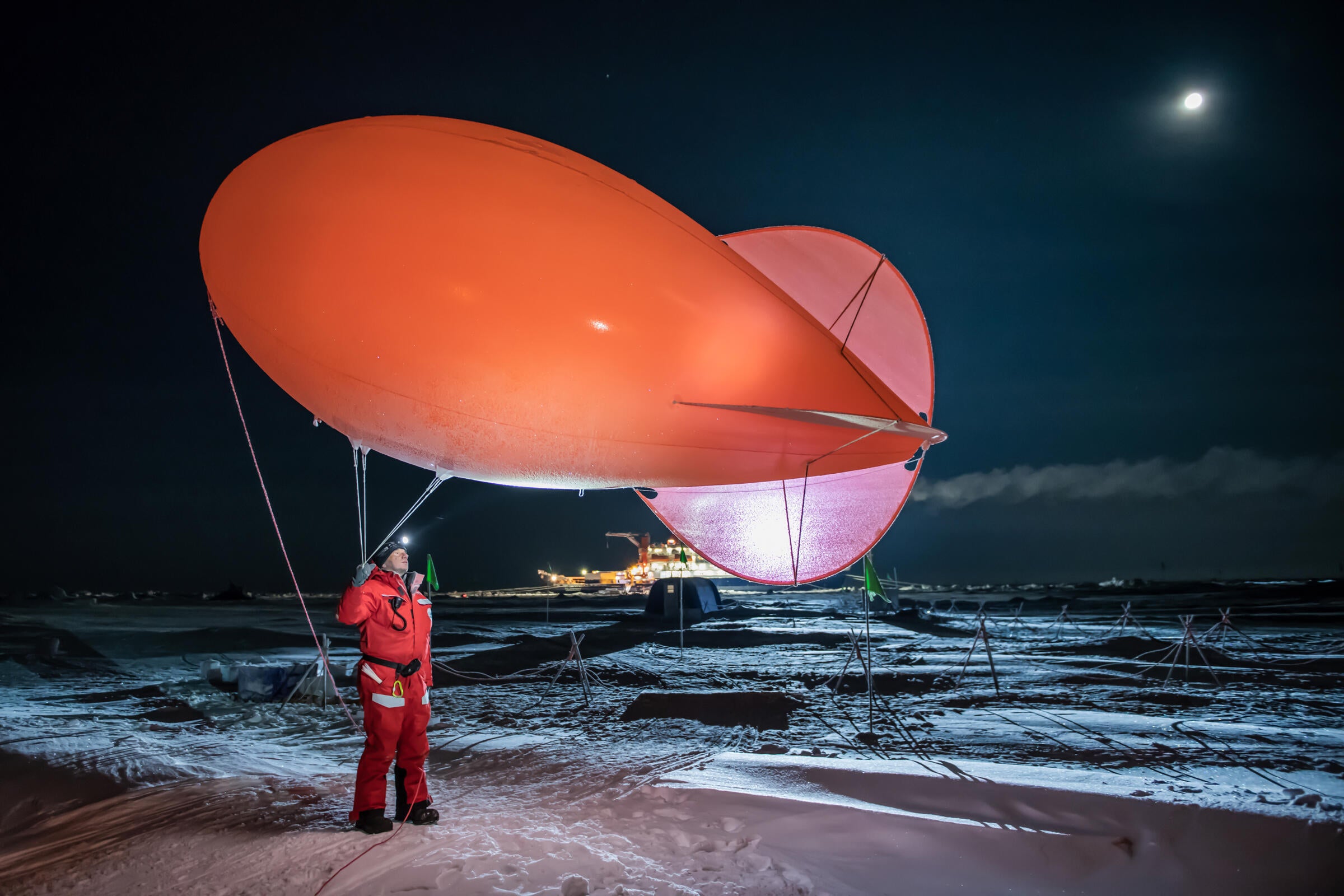 An oval, pinkish-orange balloon with fins extending off the back looms large as it floats above Jürgen Graeser, a technician on the MOSAiC expedition. Known as Miss Piggy, the weather balloon collects data within the few thousand feet of atmosphere above the ice. Graeser wears a red snowsuit, and the ship Polarstern is visible in the distance. December 12, 2019. Photo: Esther Horvath

The Arctic is warming faster than anywhere on Earth, and clouds may be key. Photographs by Esther Horvath capture an extreme scientific mission.

The high Arctic is dangerous in the dark of winter. Temperatures drop to –40 degrees. Ice cracks underfoot. Polar bears roam. Yet scientists on the Alfred Wegener Institute’s MOSAiC expedition (the Multidisciplinary drifting Observatory for the Study of Arctic Climate) braved these hazards so they could study the Arctic atmosphere for a full year.

High-Arctic icebreaker missions like this one aren’t unprecedented. However, MOSAiC collected more and better data, and involved more researchers that were more farflung. It had one other critical difference: “All those old expeditions were studying an Arctic that doesn’t exist anymore,” says expedition co-coordinator Matthew Shupe, at atmospheric physicist with the University of Colorado and NOAA. “The Arctic is changing fast, and the ecosystem is changing fast. We need to understand what’s happening now.”

Today’s Arctic is warming two to three times faster than anywhere on Earth, and scientists have urgent questions about why. Clouds may be key. “Clouds are one of the leading sources of uncertainty in our models,” Shupe says. So in October 2019 the Polarstern icebreaker was locked into the frozen ocean near the North Pole and left to drift as scientists sampled the sea, ice, and atmosphere. The data will yield insights into the Arctic’s cloud cycle and a sharper picture of climate change everywhere.

Miss Piggy is not your typical weather balloon. Most are one-time-use tools, which carry tiny, data-transmitting instruments through six miles of atmosphere, until they pop. But Miss Piggy, pictured here with technician Jürgen Graeser, is built for survival. The porcine balloon stays tethered to the ground and collects data—temperature, humidity, wind, particles, and more—within the few thousand feet of atmosphere above the ice known as the surface boundary layer. In winter, this region is turbulent: When ice cracks, exposed seawater emits water vapor and heat that travel from the surface up into the high atmosphere and form clouds. As the Arctic warms, more cracks develop, which means more heat enters the atmosphere. How might this influx affect clouds? Miss Piggy will tell us.

To work in the high Arctic, you need a safe haven: a well-defended ship. It’s warm, there’s food, water, electricity, and camaraderie, and, crucially, polar bears cannot get in. But on the ice you’re exposed, which is why polar bear guards kept watch over the scientists as they worked. When the trained, armed sentries spotted a bear, they evacuated the ice floe by hauling remote staff back to the ship on snowmobiles and sleds, and chased the bears away with flare guns. The strategy worked: The mission had no human-bear encounters all year. 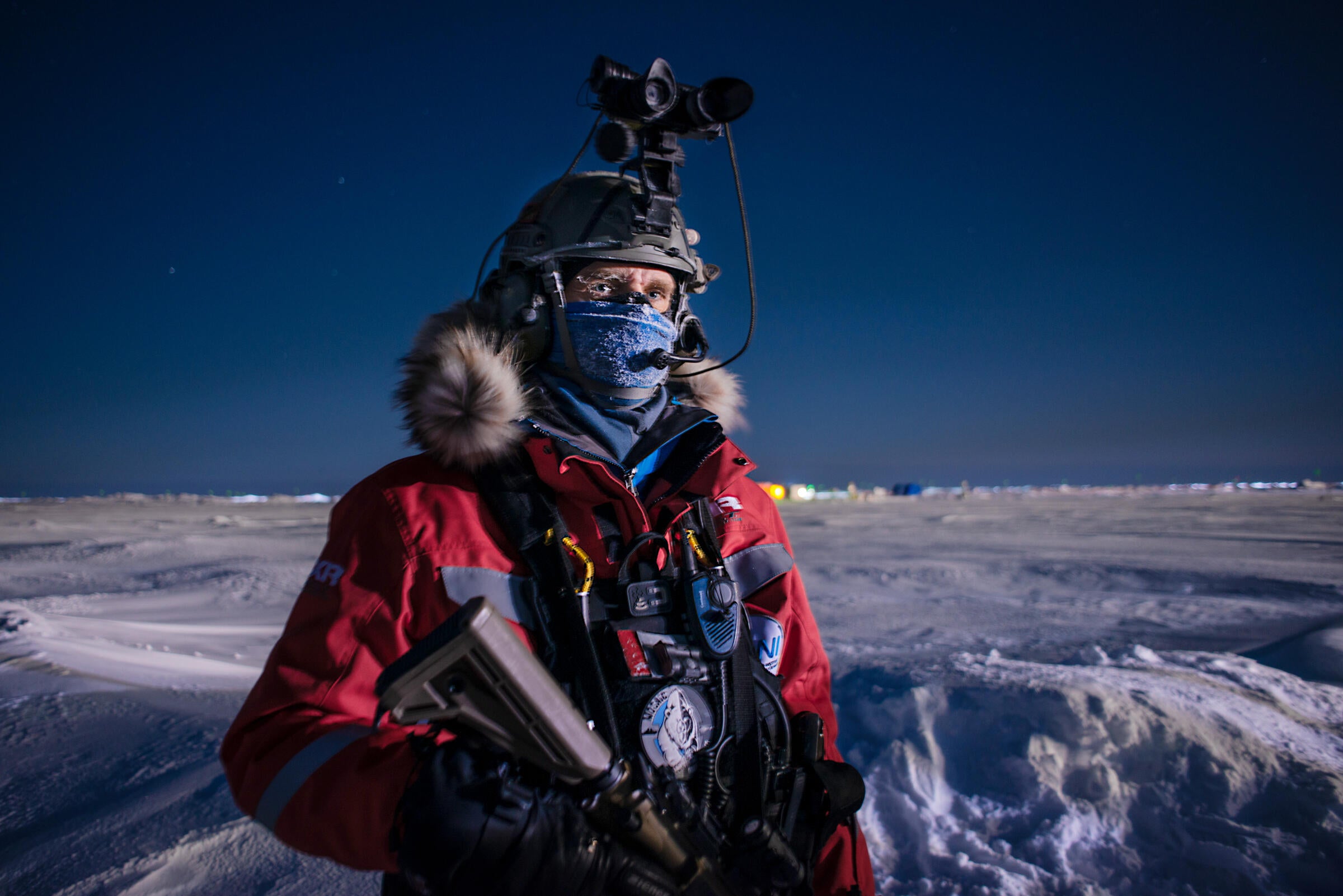 Olaf Stenzel, a Polarstern polar bear guard, kept watch over scientists working on the ice. With a determined look on his face, he stands in front of a frozen expanse in a heavy red coat with a frost-coated blue scarf across his face, carrying a gun and wearing night vision goggles. Photo: Esther Horvath

While there were no incidents, the scientists saw plenty of bear visitors. On October 10, 2019, two polar bears came close to the ship and stayed for several minutes exploring the ice camp before they were chased off. Luckily for photographer Esther Horvath, they stuck around long enough for her to capture photos of the curious animals. A photograph similar to the one below won her a World Press Photo prize. 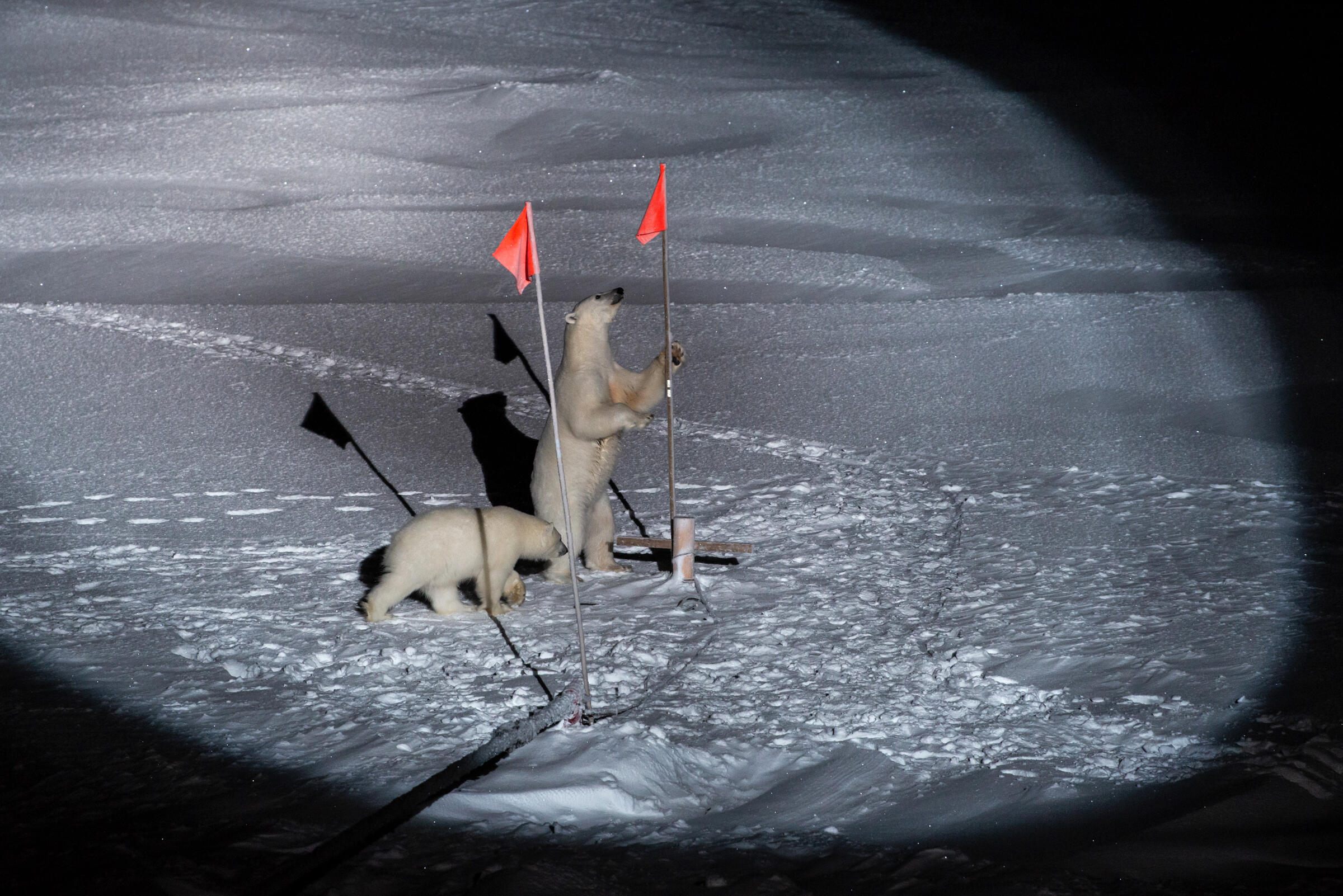 Two polar bears visited the Polarstern on October 10, 2019. One stands on its hind legs, grasping at a a tall orange flag that marks the camp's boundaries, while the other explores nearby. Photo: Esther Horvath

The ship provided safety, and also served as a scientific platform. Inside a container on the bow, atmospheric scientist Julia Schmale from the Swiss Federal Institute of Technology set up a laboratory to analyze aerosol particles. Each minuscule speck of dust, soot, ocean salt, sulfate, ammonia, or microbe is a seed around which water vapor condenses; together these form a cloud.

In most places clouds cool the climate by reflecting incoming sunlight and heat back into space. But in the Arctic, winter clouds warm the region by trapping heat rising from the ocean. Nobody knows how big the effect is, Schmale says, but it might explain the Arctic’s rapid warming—and help scientists understand climate change far away. Global weather is driven by temperature differences between polar and temperate regions, which means Arctic warming affects everyone. “One atmosphere connects every place on Earth,” she says. Right now climate models especially lack data from winter months. By filling those gaps, Schmale aims to unpack the cloud mystery. 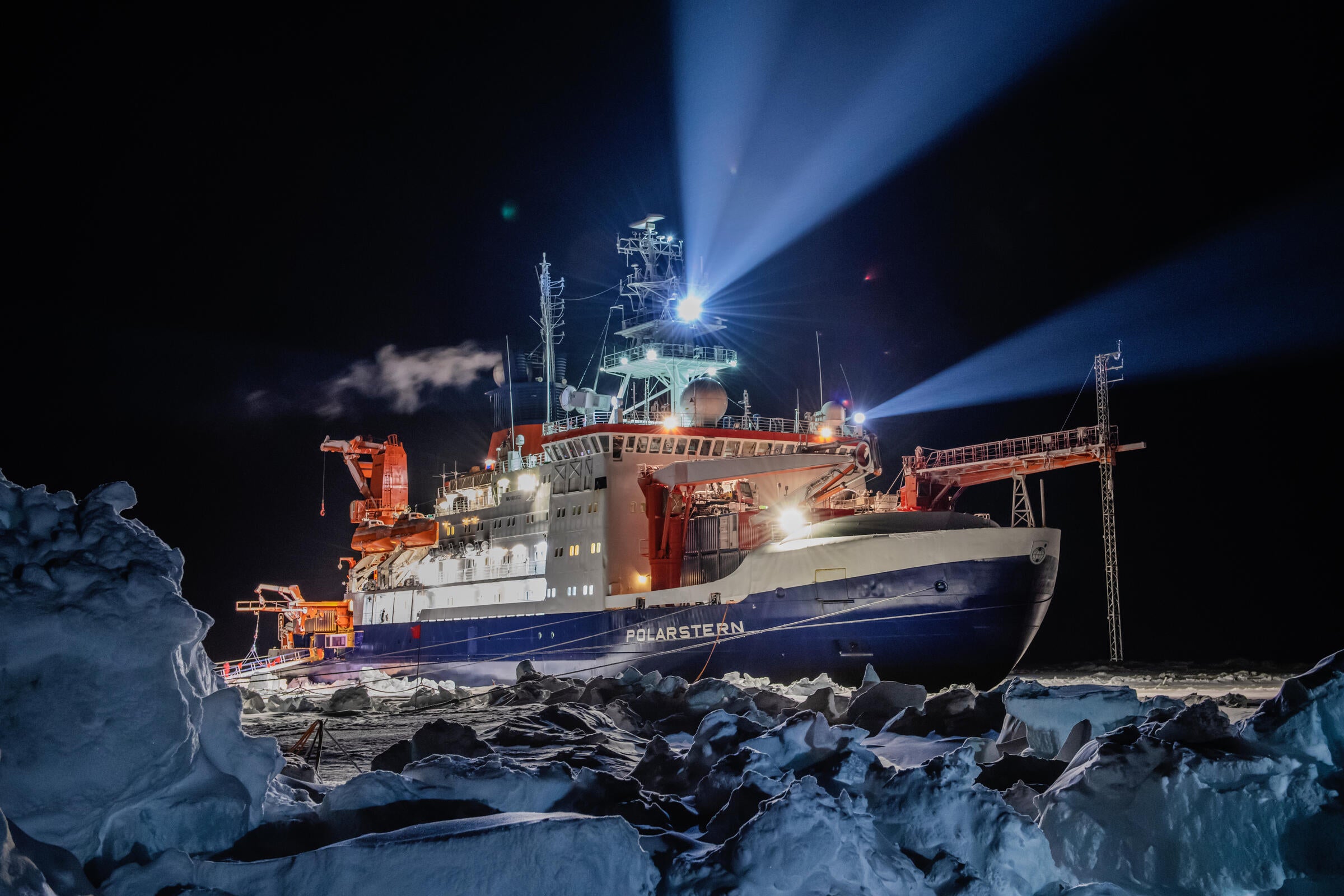 The Polarstern icebreaker ship stands boldly illuminated by its own lights in what is otherwise the dark polar night. The ship is painted navy blue, with Polarstern spelled out in white lettering. Many cranes, ladders, towers, and other technical equipment extend from the deck. Photo: Esther Horvath

Beyond the ship, infrastructure developed on the ice floe: 5,300 meters of powerline and 2,500 meters of network cable crawled toward multiple encampments hosting millions of dollars of scientific equipment. Incredibly, these structures were built on a dynamic, ever-shifting ice floe prone to sudden transformation. “You can’t necessarily tell the floe is moving,” NOAA’s Shupe says. “But if you really slow yourself down—close your eyes and sit there—you can feel it.” While parked in the ice floe with its engines off, Polarstern traveled miles across the ocean every day and more than 1,000 miles in a full year. 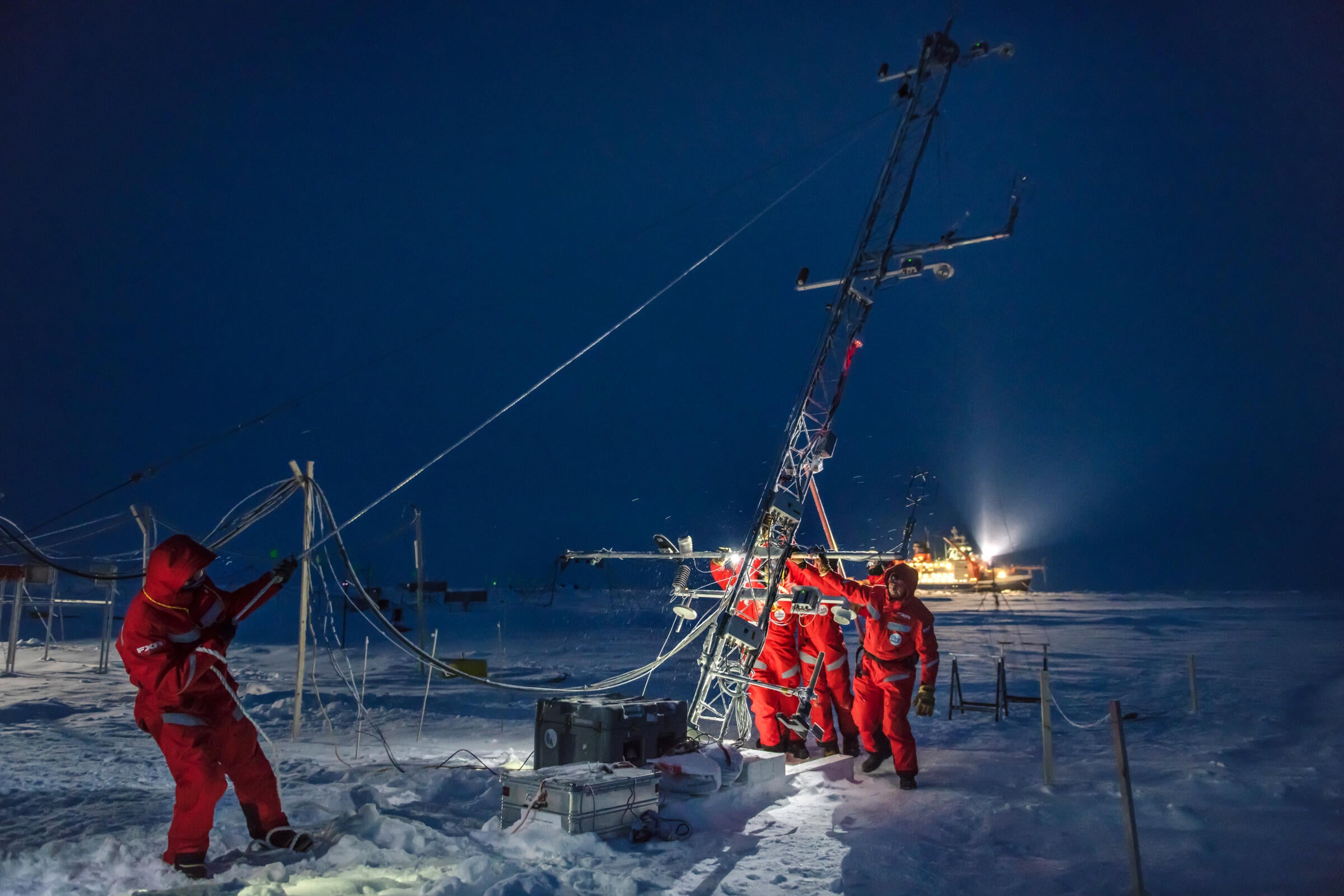 Scientists, all wearing red snowsuits, hoist a 36-foot-tall tower while standing on a snow-covered ice field. One scientist pulls on a long rope attached to the very top of the structure, while three others stabilize the base. October 24, 2019. Photo: Esther Horvath

The encampments were never on solid ground. At the atmospheric research camp known as Met City, Shupe and his crew were hoisting the 36-foot-tall tower (pictured above) when he heard a loud noise. “I look down and there was a crack in the ice going right under my feet,” he says. Luckily the crack froze back over, and the tower sustained no injury. But at all times Met City was on the move as it drifted with the ice. Sometimes it rotated around the ship—or threatened to leave altogether. “There it is, floating on its own ice floe,” Shupe recalls. “Met City really took a ride.” 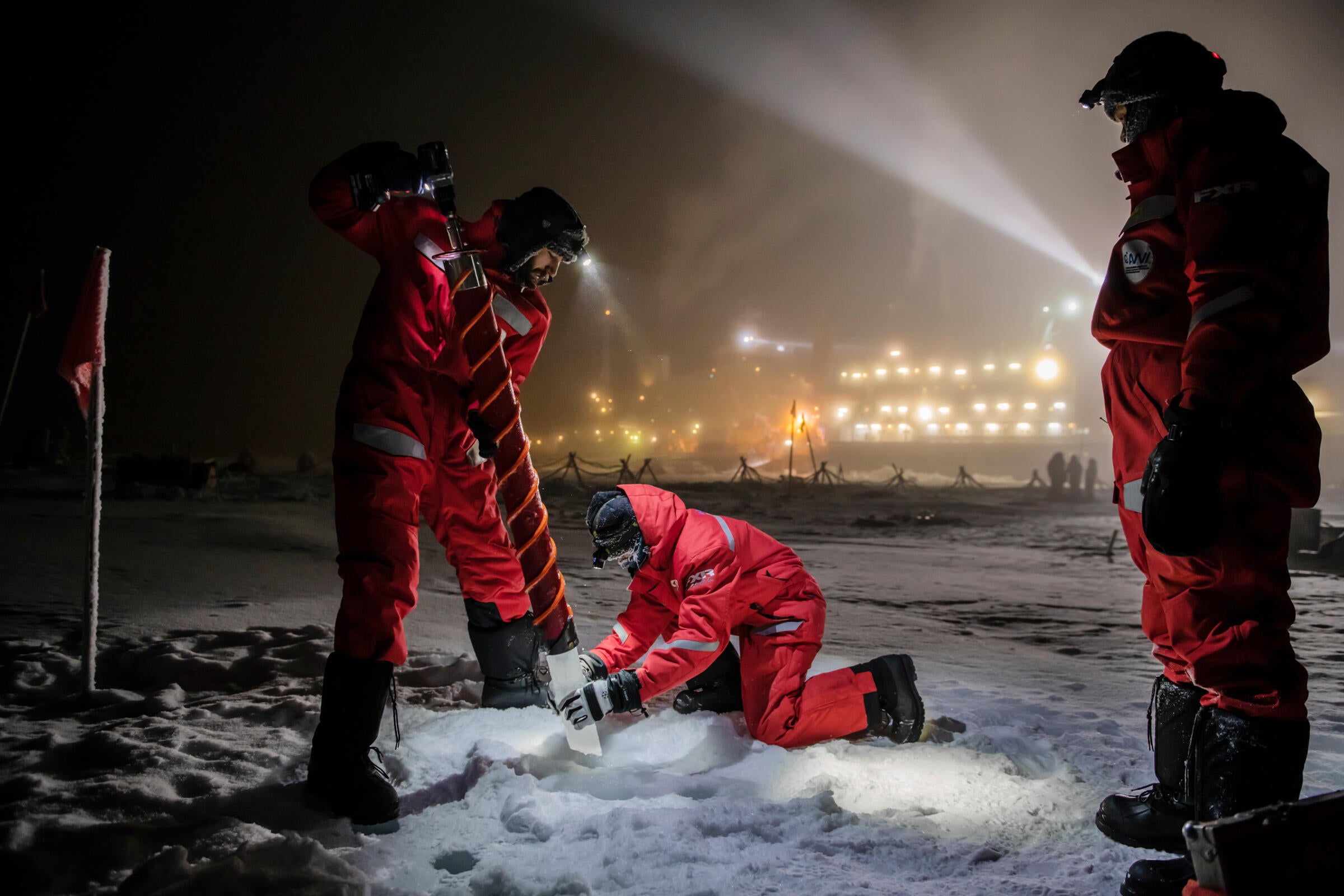 Three members of the ice team collect a test core. A scientist kneeling on the ground removes a cylindrical piece of ice from a drill approximately five feet long. Photo: Esther Horvath

To fully understand what’s happening in the Arctic air, you have to study the ground. Every week a team drilled into the sea ice to collect 50-plus cores. Then they brought them back to the ship to process samples for dozens of scientists on board and at home. One member of the ice-core team was Jessie Creamean (not pictured), a staff scientist at Colorado State University who studies how microbes like algae and bacteria produce aerosol particles which then seed clouds. As sea ice melts, the Arctic ecosystem is expected to undergo a shift from hosting ice-residing microbes to hosting open-water microbes. Those microbial community changes could then affect cloud formation. “Climate change can affect the ecosystem, and then the ecosystem can affect the climate,” Creamean says. “It’s all connected.” 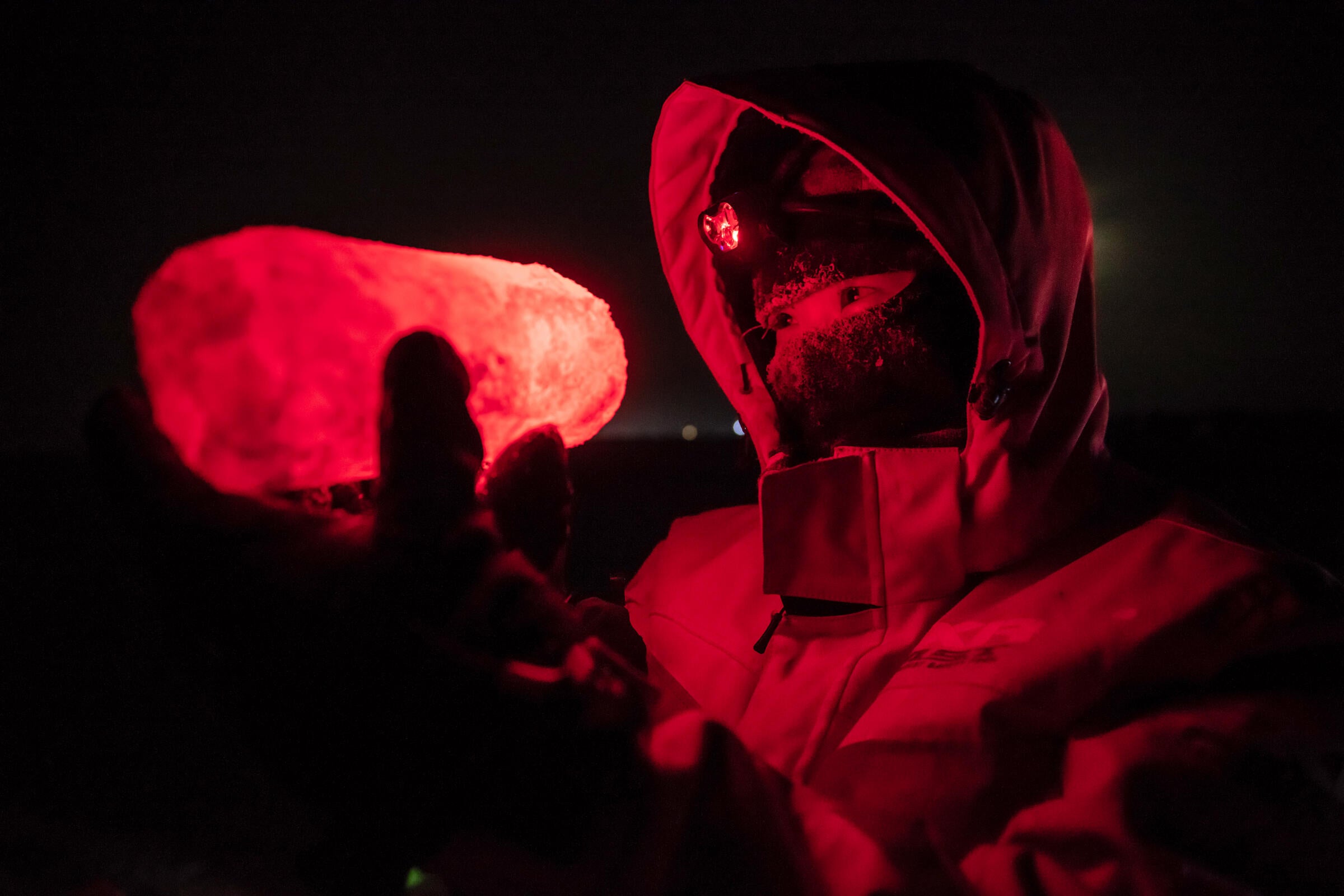 Allison Fong, an Alfred Wegener Institute biologist, inspects part of an ice core under red light. The red light is necessary so the scientists do not artificially stimulate microbes living in the ice. Photo: Esther Horvath

Life on a high-Arctic icebreaker required teamwork and trust. Those qualities extended beyond the ice; the hundreds of scientists that took part in MOSAiC throughout the year represent a much larger international community of meteorologists, biologists, physicists, and chemists. For instance, data collected by high-tech sensors (below) measure ice thickness and snow depth on the ground that are used to validate data collected by satellites and used by researchers around the world. 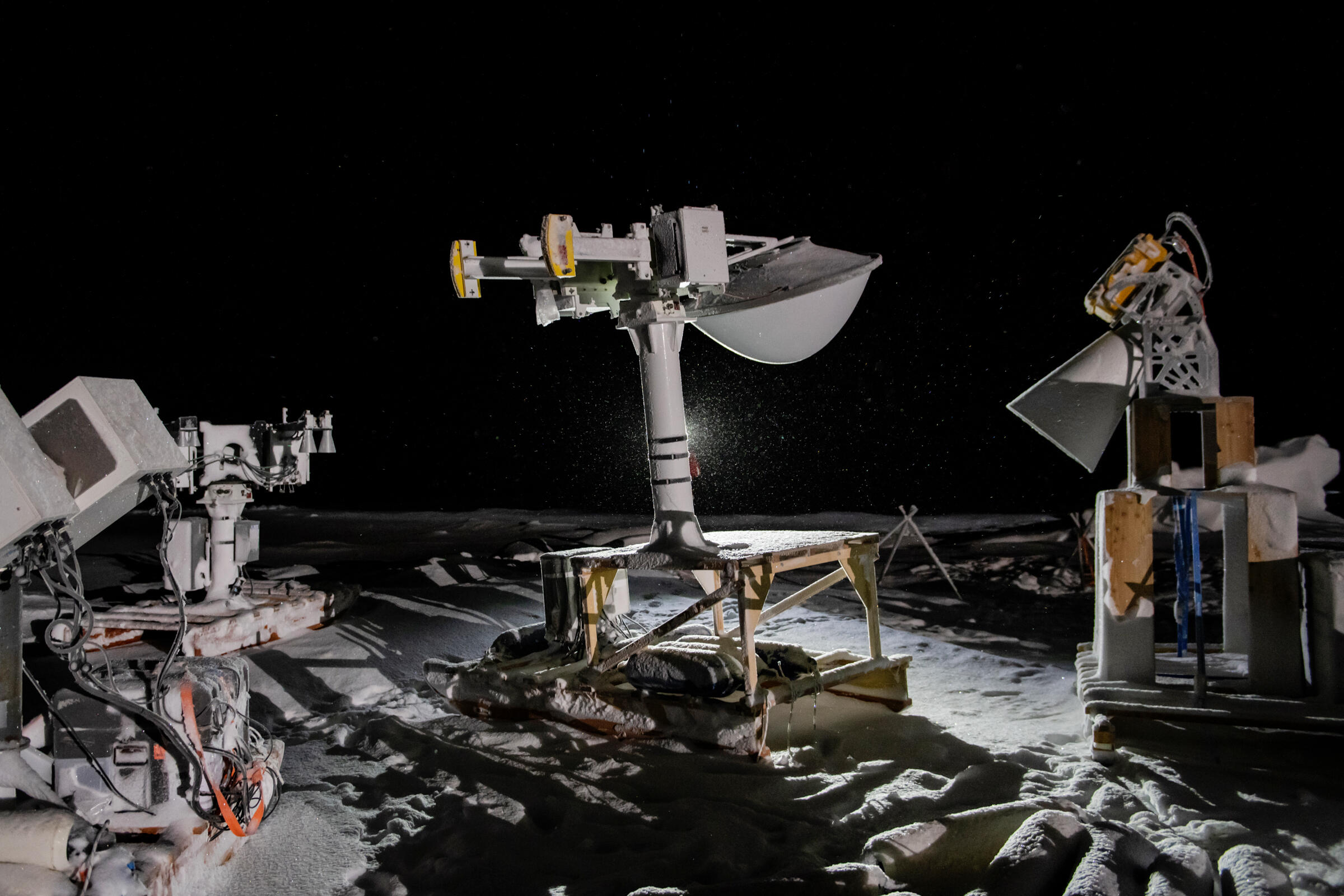 Three high-tech sensors, which look like rudimentary robots, stand together on the snow. They link up with satellite technology to determine how snow cover influences the growth of the sea ice. November 22, 2019. Photo: Esther Horvath

The shared, extreme experience of living on Polarstern cultivated community. The few habitable structures—such as a Met City tech hut (below), warm enough to shelter computers and scientists—became gathering spots. Such sites sparked conversation and collaboration. “I was bumping elbows with biologists all day long,” says Shupe, a physicist. The connections between atmosphere, ice, and sea, and between physics, chemistry, and biology, became a running theme. “The gears start spinning in your head: How are these things linked?”

After Polarstern returned to Bremerhaven, Germany, on October 12, 2020, researchers scattered back to 37 countries to pore over data. They’ll eventually link up their own findings with those of friends and colleagues made on this once-in-a-lifetime expedition, and together generate improved models of how climate change is unfurling at the farthest reaches of this planet. 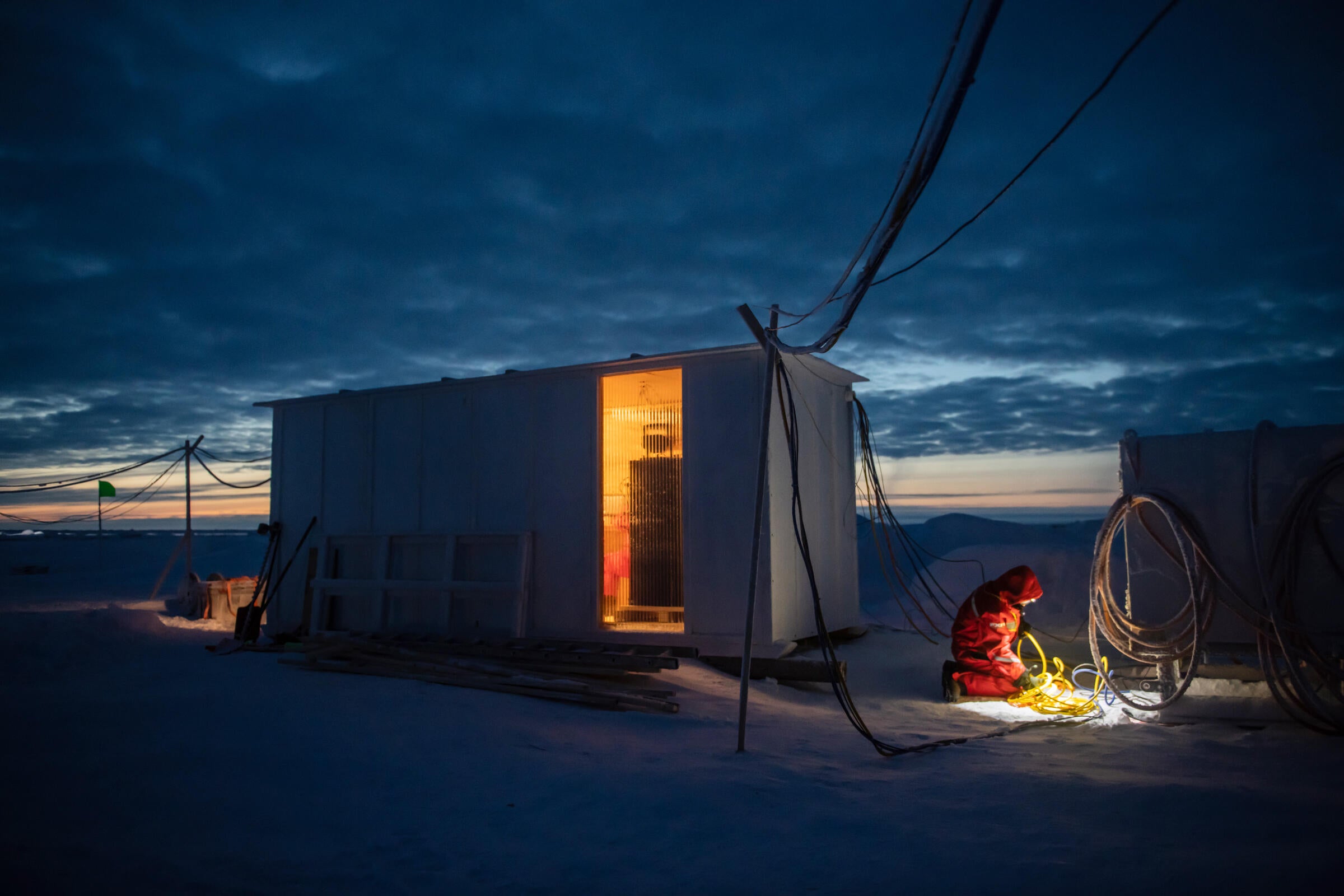 Warm, orange light shines through the doorway of the Met City tech hut—a container to keep computers warm, and large enough to house scientists huddling for warmth, too. A scientist kneels beside the hut untangling yellow cables. Photo: Esther Horvath

Into the Arctic Ice, The Largest Polar Expedition of All Time, by Esther Horvath, Prestel, 288 pages. Available now here