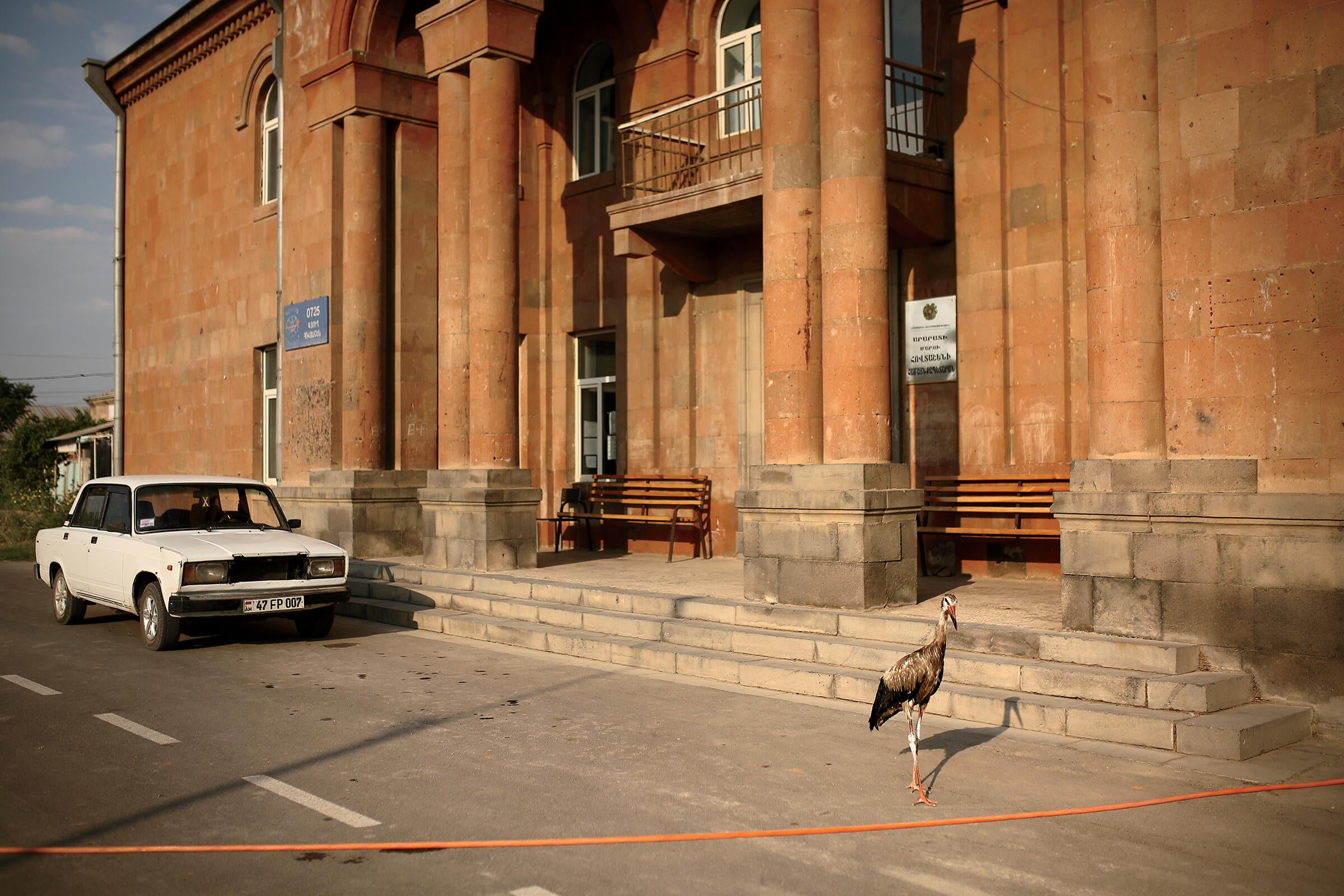 This summer, as in the past, volunteers gathered in a field next to Hovtashen’s town hall (pictured here) to treat oiled birds, like this one. Photo: Biayna Mahari

Behind the Mystery of Armenia's Oil-Covered White Storks

In the half decade since oiled birds were first spotted, volunteers and conservationists have raced to care for the iconic animals—and pushed the government to address pollution sources.

In 2017 residents of Armenia’s Ararat Valley region began noticing a strange phenomenon: White Storks that nest in their villages were covered in a thick, oily substance. Villagers alerted BirdLinks Armenia, an organization that monitors birds and butterflies, which assembled a team to wash the iconic waders and nurse them back to health before releasing them into the wild. With each passing year, Armenians have seen more oiled storks, which indicates that, rather than being an isolated incident, the issue is complex and systemic. And as the problem has gotten bigger, so has the response. Conservationists, community leaders, and volunteers across Armenia have been treating affected storks, as well as working to find the sources of the pollution and advocating for the government to address them.

Exalted in legends and folklore, storks hold a special cultural significance for Armenians. They are bearers of good fortune (not just of babies, as the universal trope holds). One of Armenia’s most well-loved folk songs, “Bari Aragil” (“Good Stork”), implores: “Come live by my house, good stork. Weave your nest atop my poplar tree.” Nowadays, while telephone poles are the more common perch of choice for the birds, Armenians still celebrate the appearance of a nest near their home. This sense of kinship has no doubt played a role in residents’ concern for the birds. This summer, as in the past, volunteers gathered in a field next to Hovtashen’s town hall to treat oiled birds. An oil-covered White Stork waits safely in a volunteer's backyard while waiting to be cleaned. Photo: Biayna Mahari

Suren Mkrtchyan, a former Hovtashen mayor, has helped lead the charge to protect storks in his community. He’s been aided by bird lovers of all ages, including Mari Sharimanyan, six, and her mother, Margarita. Throughout the summer volunteers capture oiled birds, many of which are severely malnourished and injured from failed attempts to fly. They transport the roughly three-foot-tall, nine-pound waders to cleaning sites, where they scrub them with two detergent solutions before rinsing and drying them. Then they take the cleaned birds to protected, semi-wild environments, where they hand-feed them sliced pieces of fish and observe them until the storks fully regain their strength ahead of fall migration. A portion of Armenia’s White Storks winter in Africa and the Arabian Peninsula. “These birds are sacred,” Mkrtchyan says. “They have lived alongside us, always.” 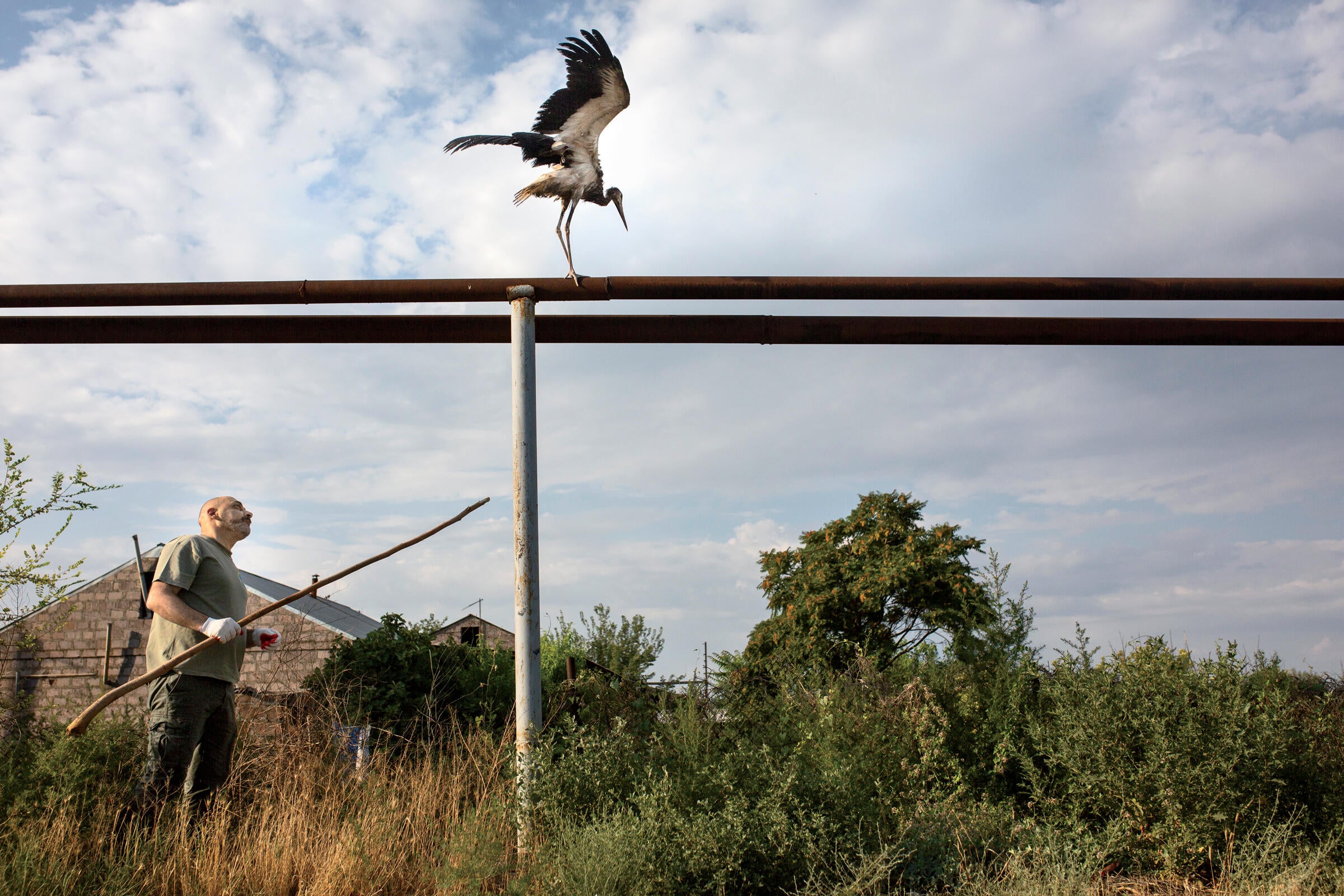 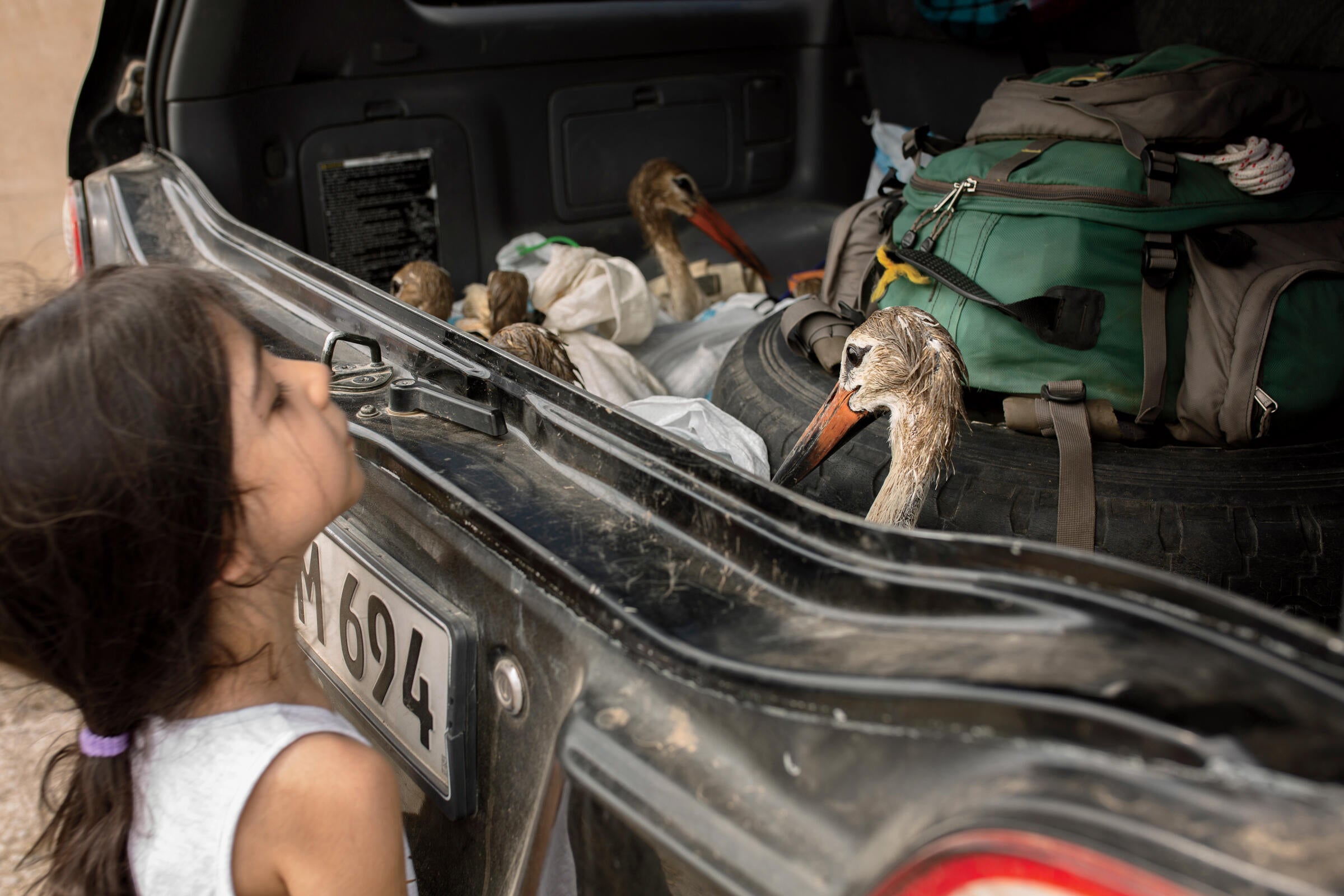 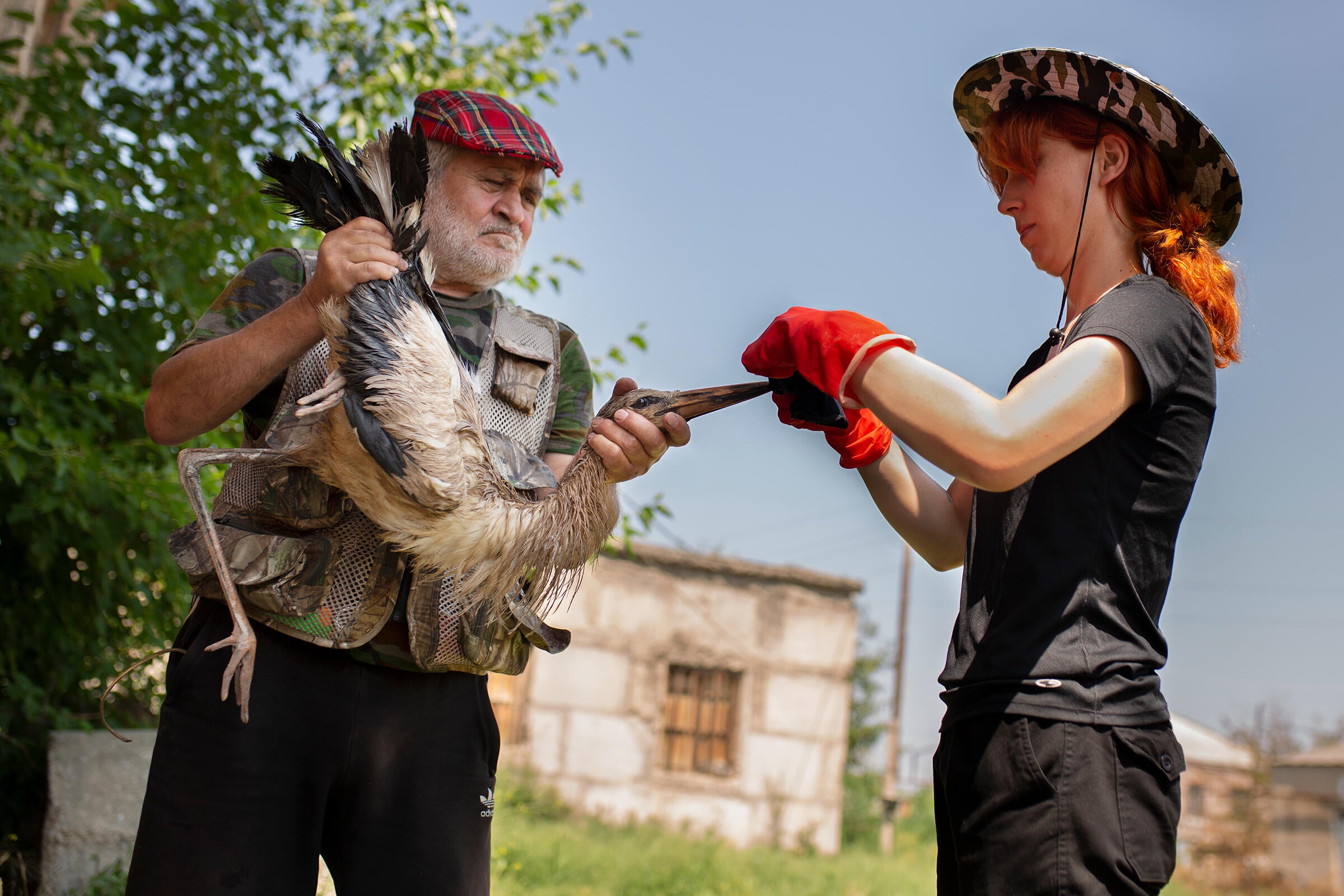 Volunteers place a sock on the head of the stork so that it doesn't panic during bathing. Photo: Biayna Mahari 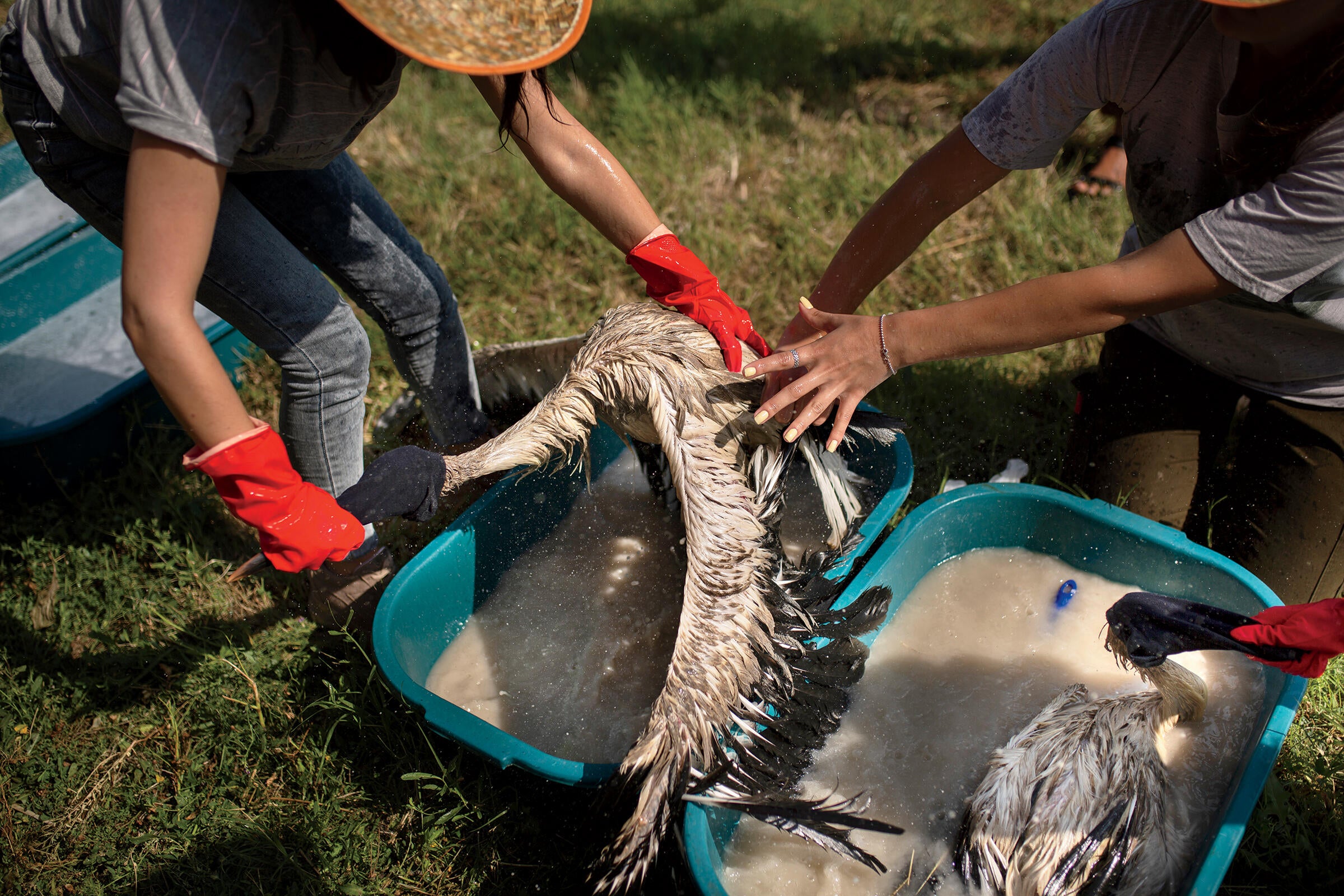 Volunteers transport the storks to cleaning sites, where they scrub them with two detergent solutions before rinsing and drying them. Photo: Biayna Mahari 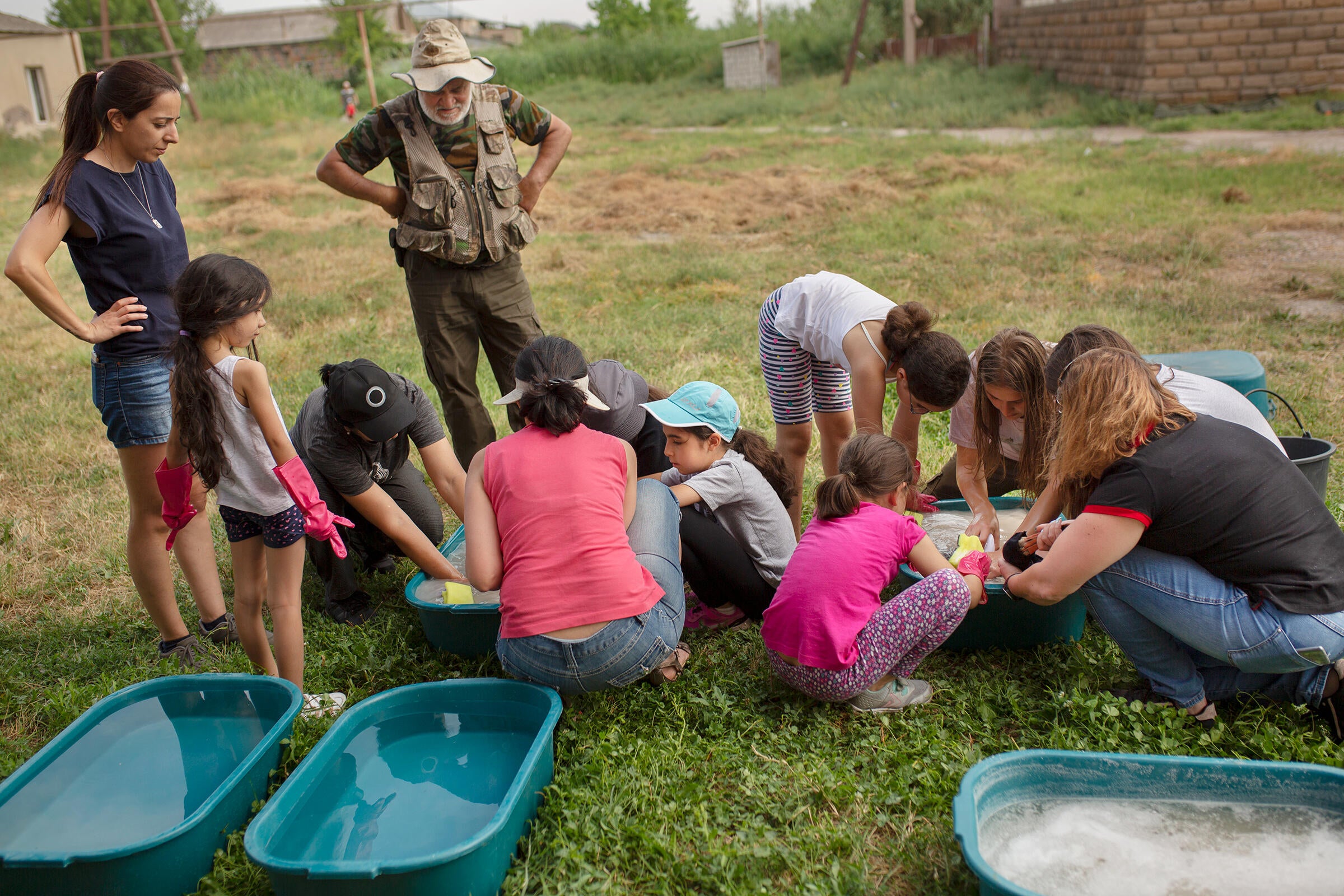 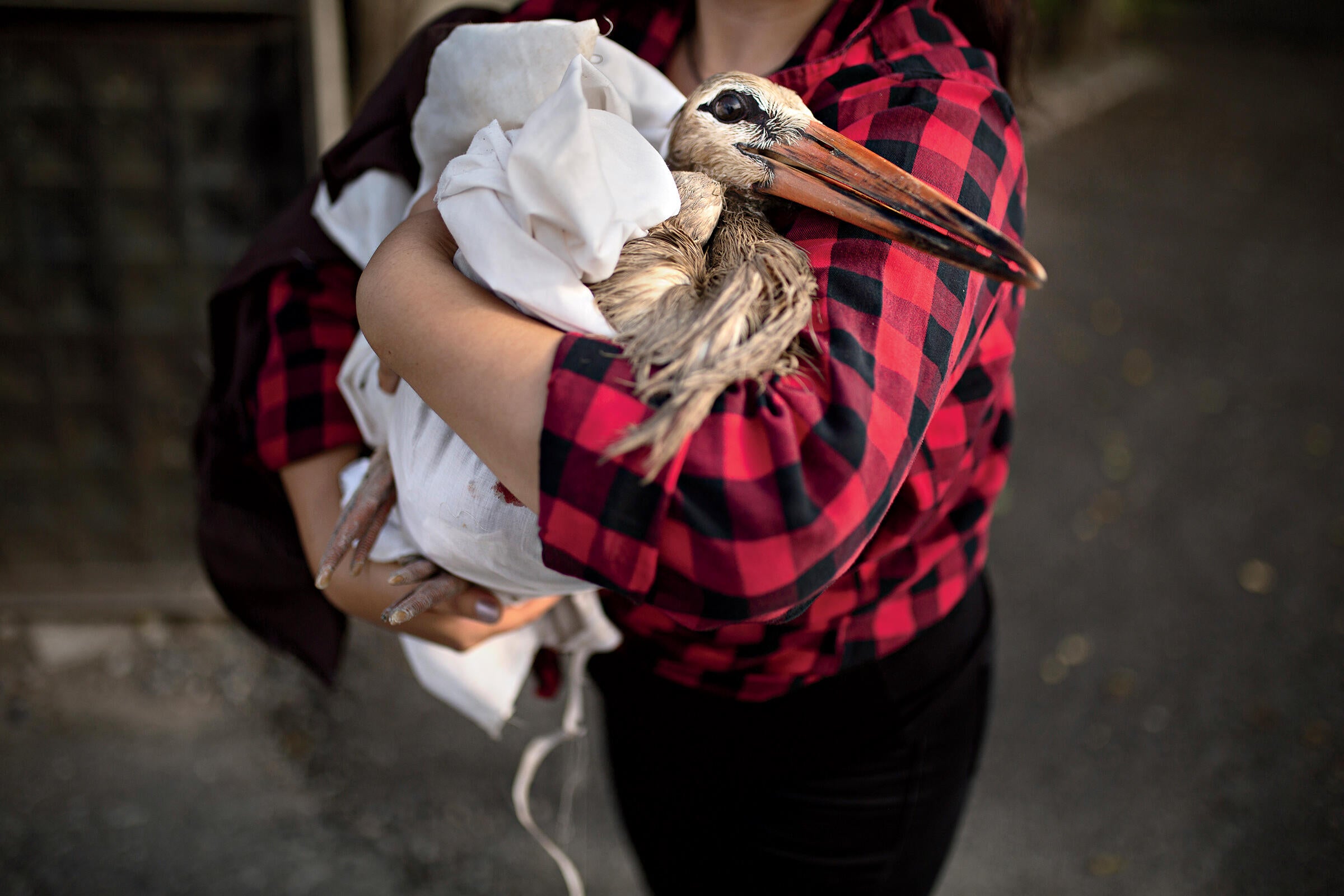 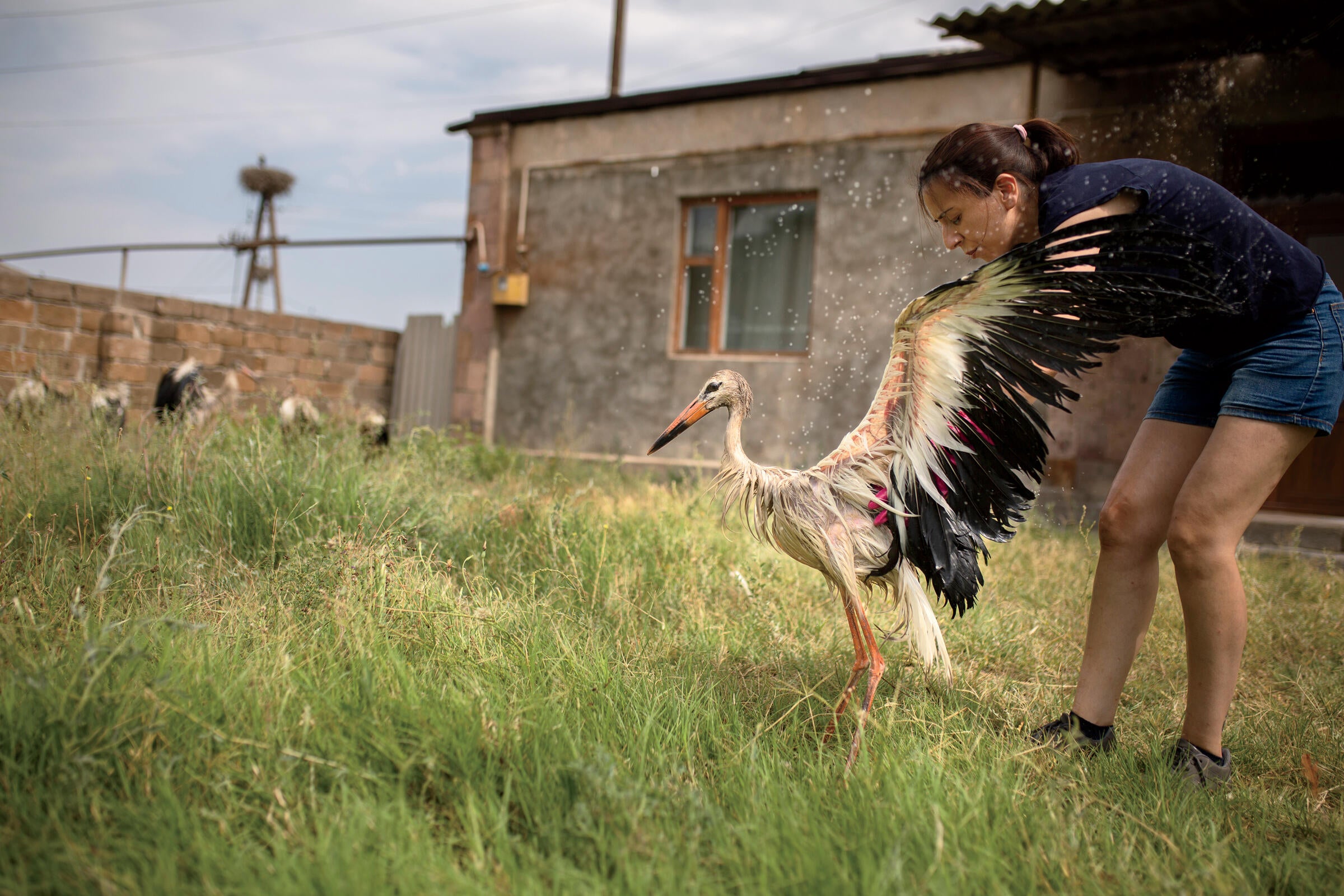 Margarita Sharimanyan, who works at BirdLinks, releases a freshly bathed stork to the yard of one of the villagers. Photo: Biayna Mahari 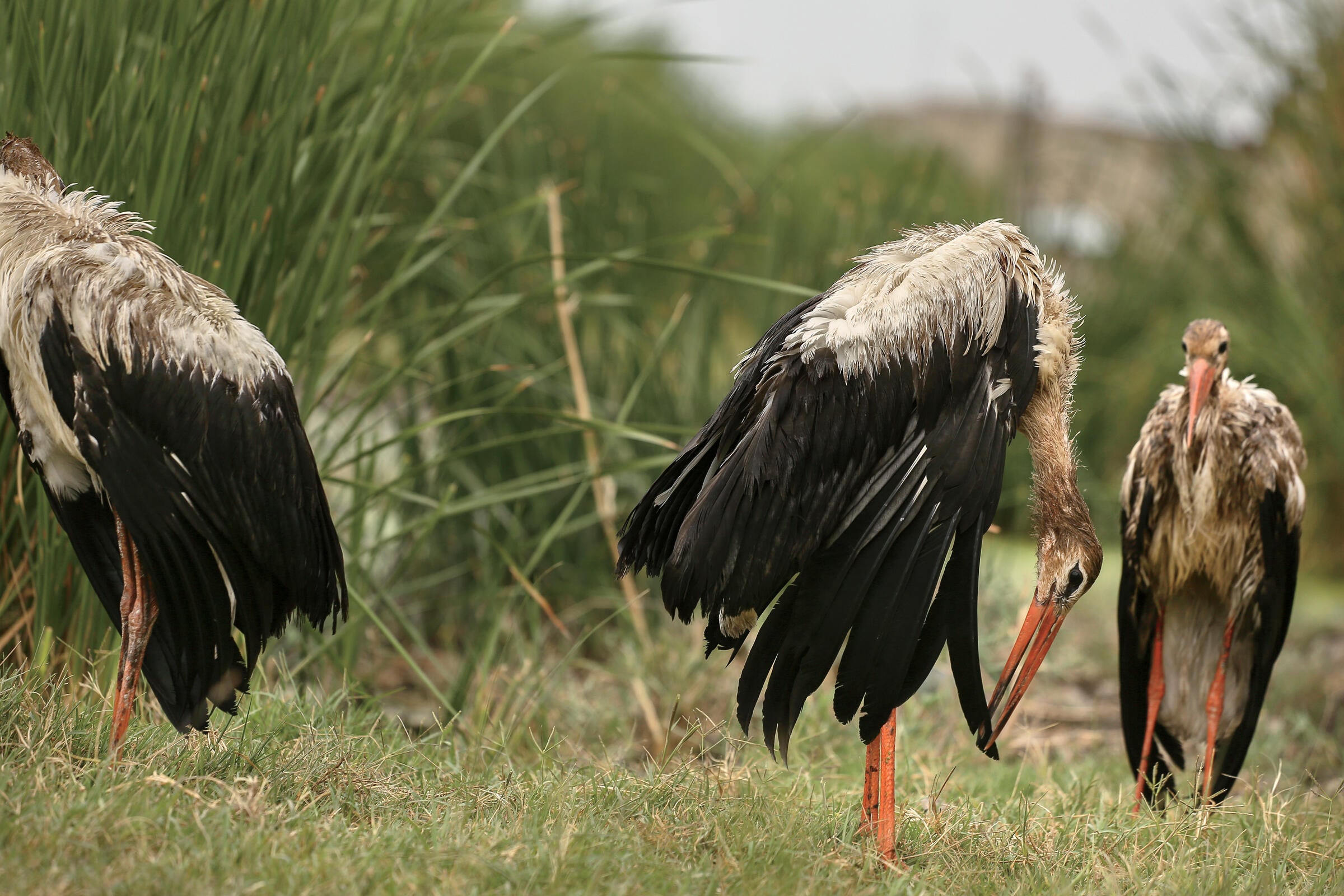 Many Armenians share his sentiment. More than 1,000 families take part in BirdLinks Armenia’s “Nest Neighbours” program, which started in 2006, long before the oil mystery. “Storks are an excellent indicator of things that are going wrong in the environment because they’re very sensitive and they’re at the top of their food chain,” says executive director Karen Aghababyan. “The other thing they have going for them is that people really care about them. We found a way to channel that love and care into data collection.”

Those careful observations have revealed that, over the past decade, some stork nesting areas in Armenia have had notably lower rates of breeding success than others. Aghababyan and his colleagues sampled the soil in these areas and found high concentrations of DDT and other banned pesticides, which may be linked to the decline. 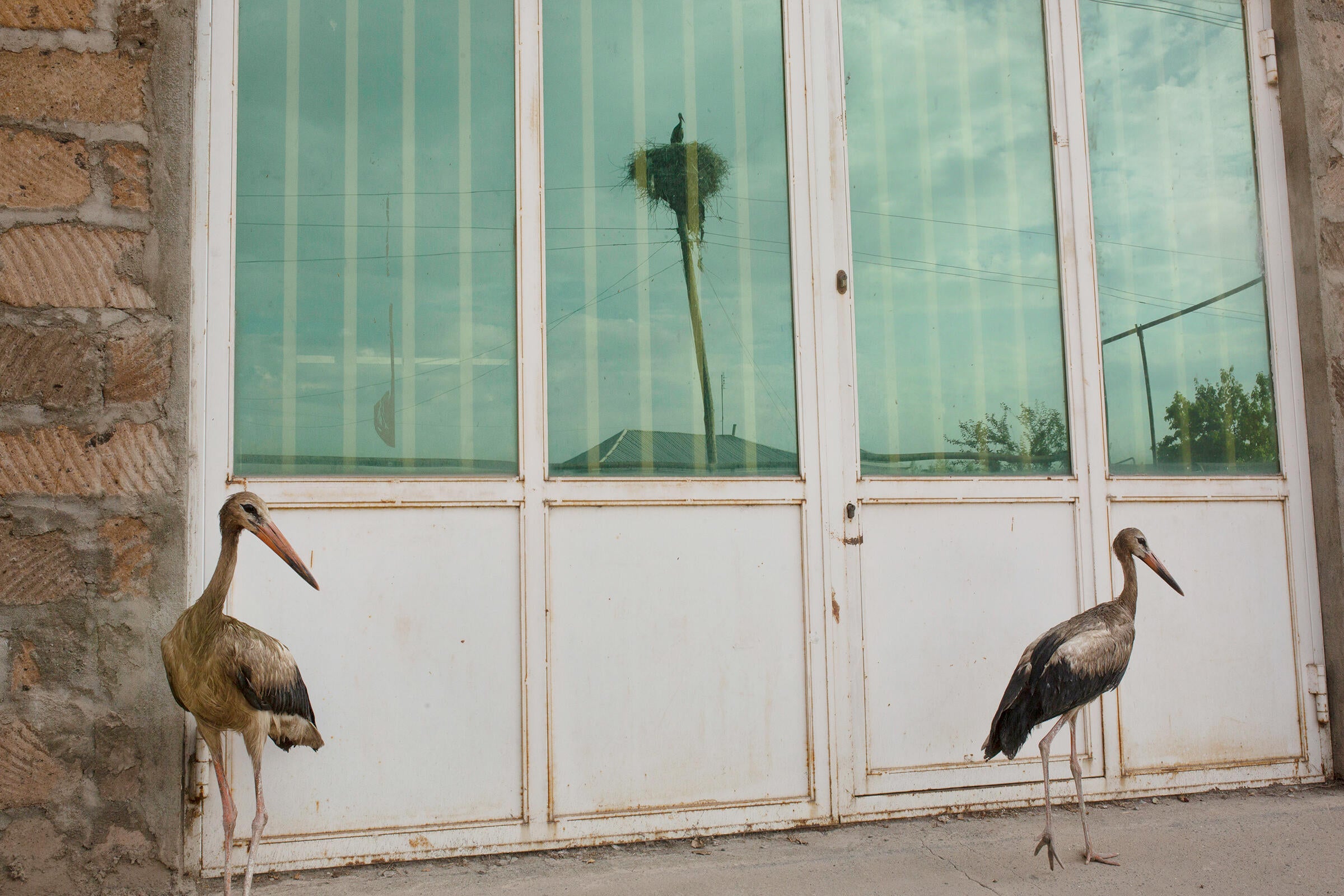 While the two storks on the sidewalk are covered in oil, the one in its nest across the street—reflected in the window—hasn't been affected. Experts believe storks become oiled at polluted feeding sites. Photo: Biayna Mahari 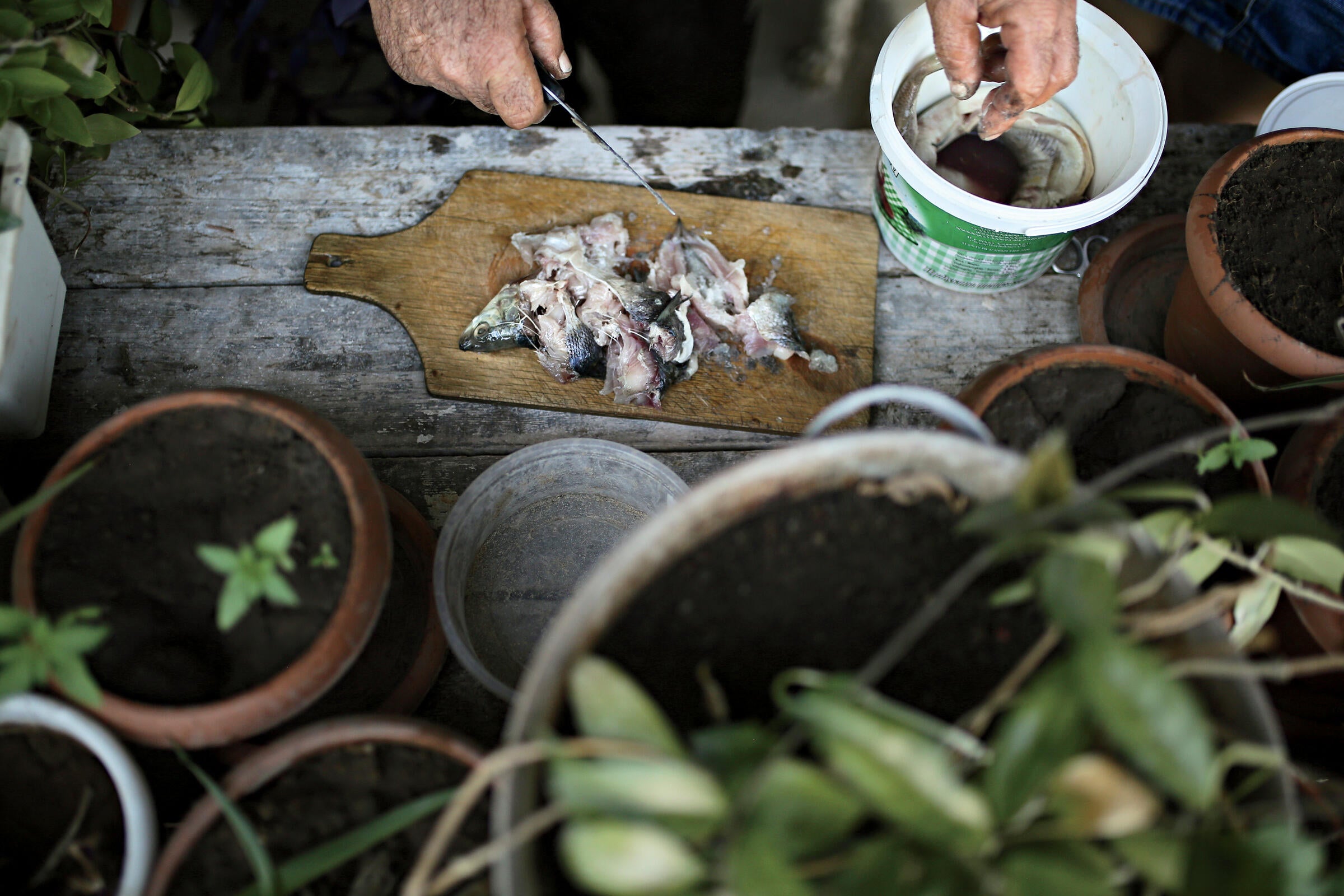 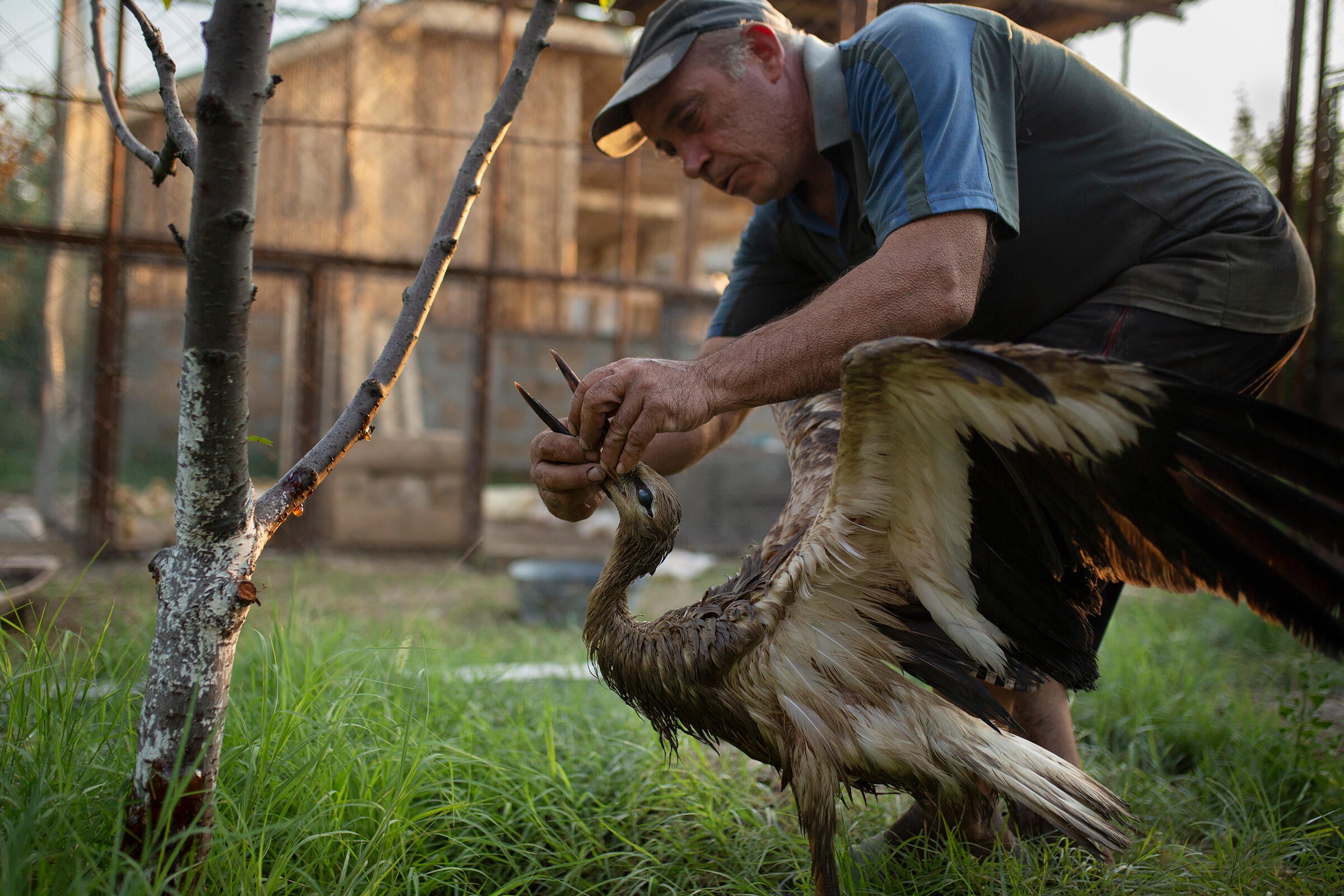 Avanesyan feeds an oiled White Stork that refuses to eat on its own. Photo: Biayna Mahari 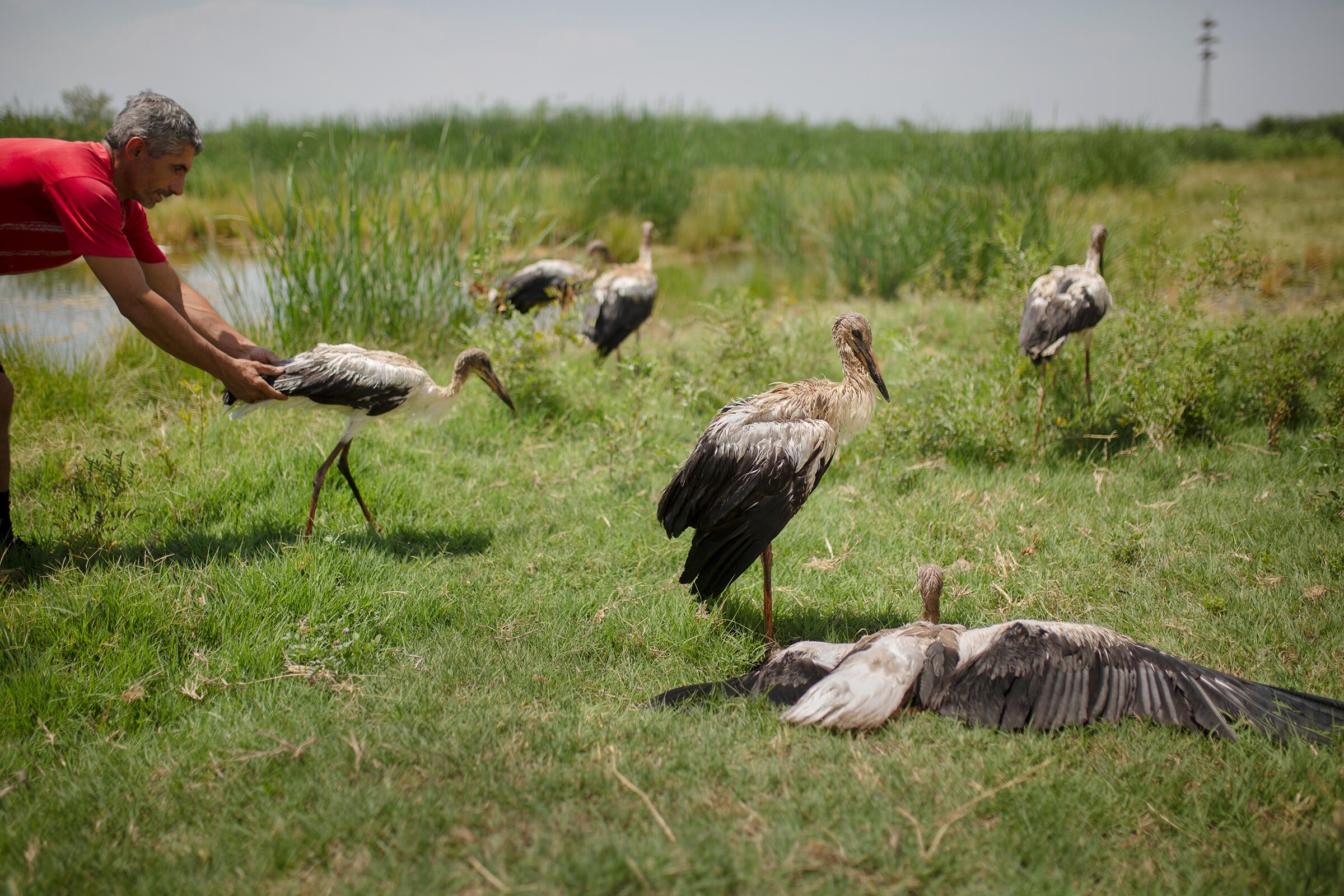 Exposure to oil is a newer, yet no less worrisome, development. For the past three years the researchers have been observing 33 villages where the contamination is most prevalent; they’ve seen the percentage of affected nestlings grow from 5 percent in 2019 to 58 percent in 2021. They also identified a likely major culprit: a sturgeon farm that’s been documented illegally dumping waste from gutted fish into a nearby canal, which causes clogging. Storks foraging for invertebrates and small vertebrates at the site pick up the fatty residue, which they transfer to their chicks.

Amid the public outcry, the government has taken action. Companies responsible for illegal dumping—including the Hovtashen sturgeon farm, multiple canneries, and a potato chip factory—have been fined, and now, under strict monitoring by the State Inspectorate Body, are required to transport waste products to the municipal dump, says Voskehat Grigoryan, head of the Department for Protected Areas in Armenia’s Ministry of Environment. What’s more, the country’s waste management legislation and enforcement mechanisms are undergoing an overhaul.

While it’s still too early to gauge the effectiveness of these measures, the recent attention has amplified the cultural significance of Armenia’s legendary White Storks—they’re not just a sign of luck, but also a call to attention, to caution, and to care. 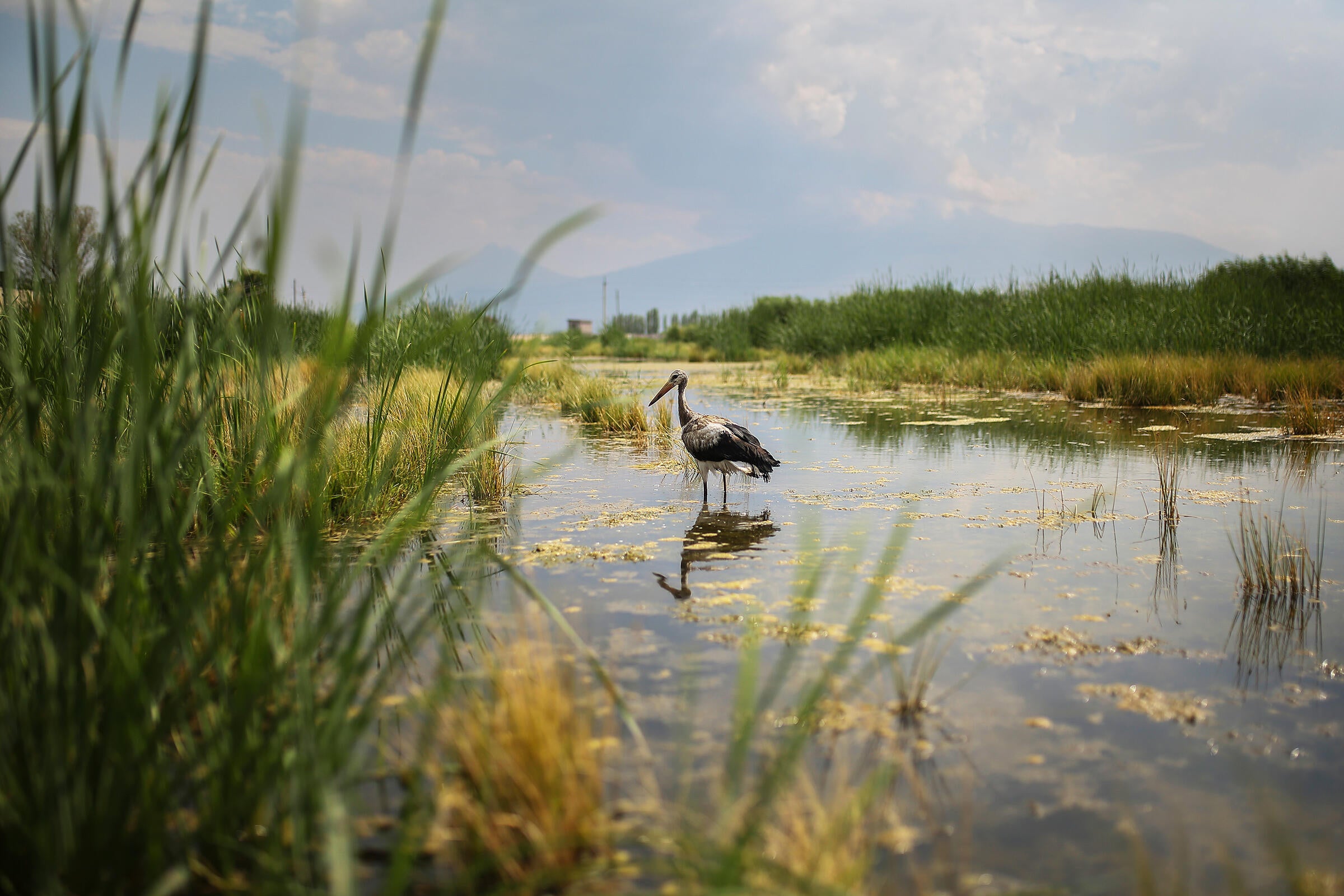 This story originally ran in the Winter 2021 issue as “Fortune-Tellers.”​ To receive our print magazine, become a member by making a donation today.​