Since settlers arrived in the United States, tribal nations have lost nearly 99 percent of their lands through treaty cessions, forced migration, theft, and devastating government policies designed to erode Native sovereignty and culture. These wrongs coincided with the destruction of habitat and wildlife populations that tribes had long lived alongside and actively shaped in beneficial ways.

By the late 19th century, an emerging conservation movement began efforts to stem damage to the environment but didn’t concern itself with past and ongoing atrocities toward Native Americans. Like the government, it, too, perpetuated and embraced policies to take land and restrict Indigenous practices.

Today some land and wildlife managers, officials, and conservationists are beginning to recognize these injustices and appreciate the power of Indigenous methods, such as prescribed burns, to maintain resilient ecosystems. That goes to the highest levels: The U.S. Secretary of the Interior, Deb Haaland, and National Park Service Director, Charles F. Sams III, both the first Indigenous leaders in their positions, are now facilitating greater tribal involvement in overseeing federal public land—all of which was once Indigenous land. In June, for example, the Interior Department formalized a historic partnership with five tribal nations to co-manage Bears Ears National Monument in Utah.

Many nations are also now finding ways to regain some of the ancestral terrain they lost, such as by purchasing property, cultivating land donations, and partnering with conservation groups and agencies. While tribes have been reclaiming homelands since at least the early 1900s—and numerous obstacles and challenges still exist—the movement sometimes dubbed “Land Back” is picking up momentum, says Cris Stainbrook, president of the Indian Land Tenure Foundation. “Land forms the jurisdiction, really, for tribal nations,” he says. “The more inside their boundaries, the more solidified their sovereignty is.”

While each tribe has its own reasons for acquisitions, such as building much-needed affordable housing, many are acting with an expansive conservation vision at the center of their agenda. They aim to heal generational trauma, enhance their culture and language, and revive traditional hunting, gathering, and cultivation practices—all while protecting and restoring key habitats and wildlife species and often welcoming public visitors. From California to Kansas to New York, recent examples span the country. The three highlighted here showcase how returning land to tribal stewardship seeds a better future for everyone.

Return of the Range 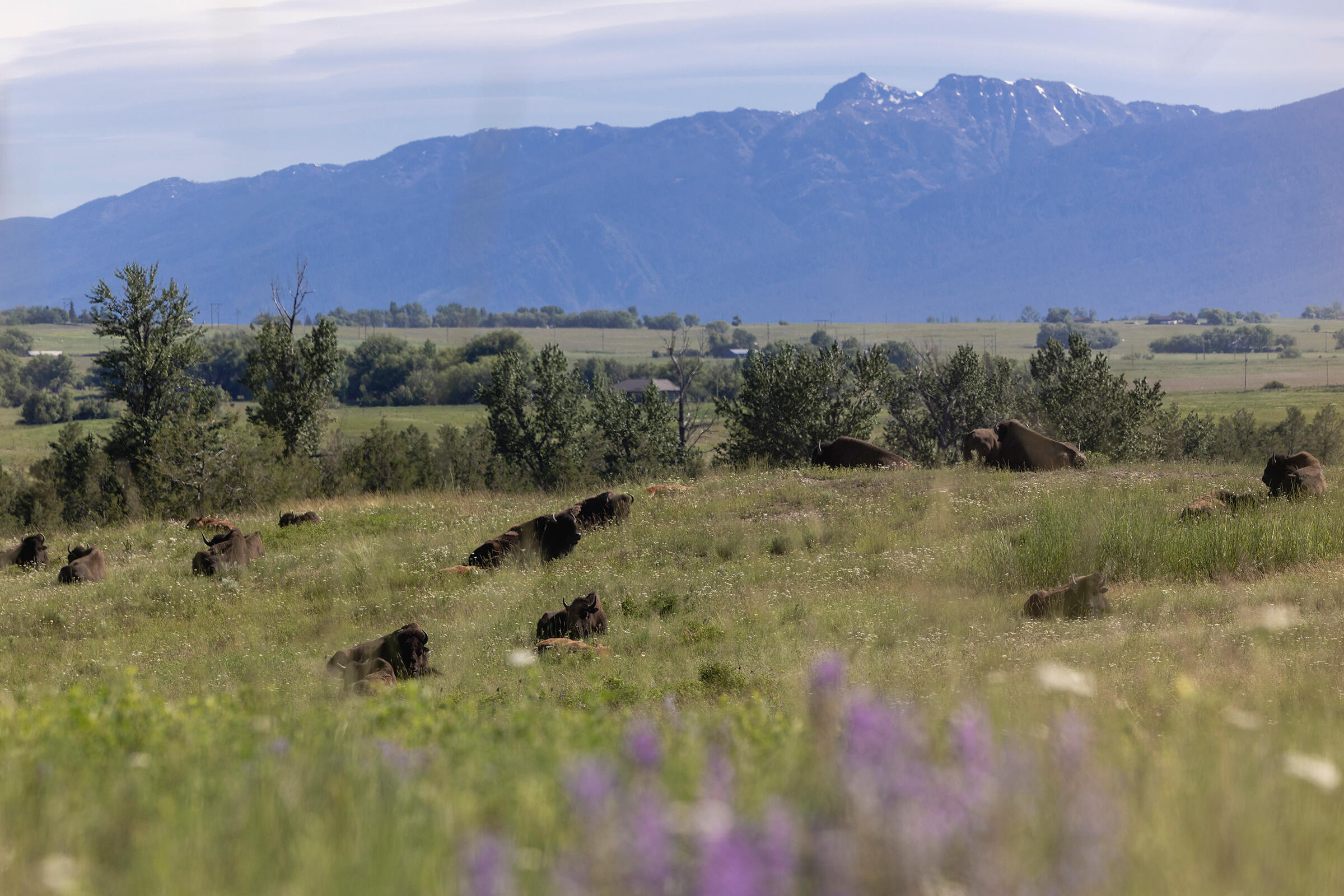 When the Confederated Salish and Kootenai Tribes’ ancestors ceded more than 20 million acres to the federal government in the Hellgate Treaty of 1855, they believed their people would live in perpetuity on the 1.25-million-acre Flathead Reservation. But the United States changed its mind.

During the allotment era from the 1880s to 1930s, Congress turned over parcels of reservation land to non-Indigenous homesteaders and individual tribal members, undercutting tribal government control. By 1934 the tribes held only 30 percent of the original Flathead Reservation in western Montana. These losses upended their ways of life, including a symbiotic relationship with bison for food, shelter, supplies, and customs, says Tom McDonald, tribal council chair of the Confederated Salish and Kootenai Tribes (CSKT). He, like many people, calls the animals buffalo.

In this time, the great irony of the National Bison Range was born. Seeing the buffalo’s precipitous decline—the result of a federal strategy of encouraging the animal’s slaughter to push Native peoples off their lands across the West—a tribal member named Little Falcon Robe established a free-roaming herd on the Flathead Reservation. By the early 1900s it was the nation’s largest remaining one. But then allotment policies fractured the landscape and forced the animals’ sale.

Soon after, spurred by wealthy conservationists rallying to save the species, President Theodore Roosevelt took 18,800 acres of the Flathead Reservation (an action a federal court ruled unconstitutional in 1971) to create the National Bison Range, one of the nation’s first wildlife refuges, in 1908. To stock it, officials bought bison belonging to the reservation’s original herd and installed fences to keep wildlife in—and Native Americans out. “It was like an island in the middle of the reservation that the tribes weren’t welcome to,” says McDonald.

Now it’s theirs again. This spring the CSKT held a celebration of the transfer of the Bison Range from the Interior Department back to the tribes. The long-sought action was part of a larger deal in which the CSKT relinquished thousands of off-reservation water-right claims in exchange for a nearly $2 billion trust to improve its water supply. 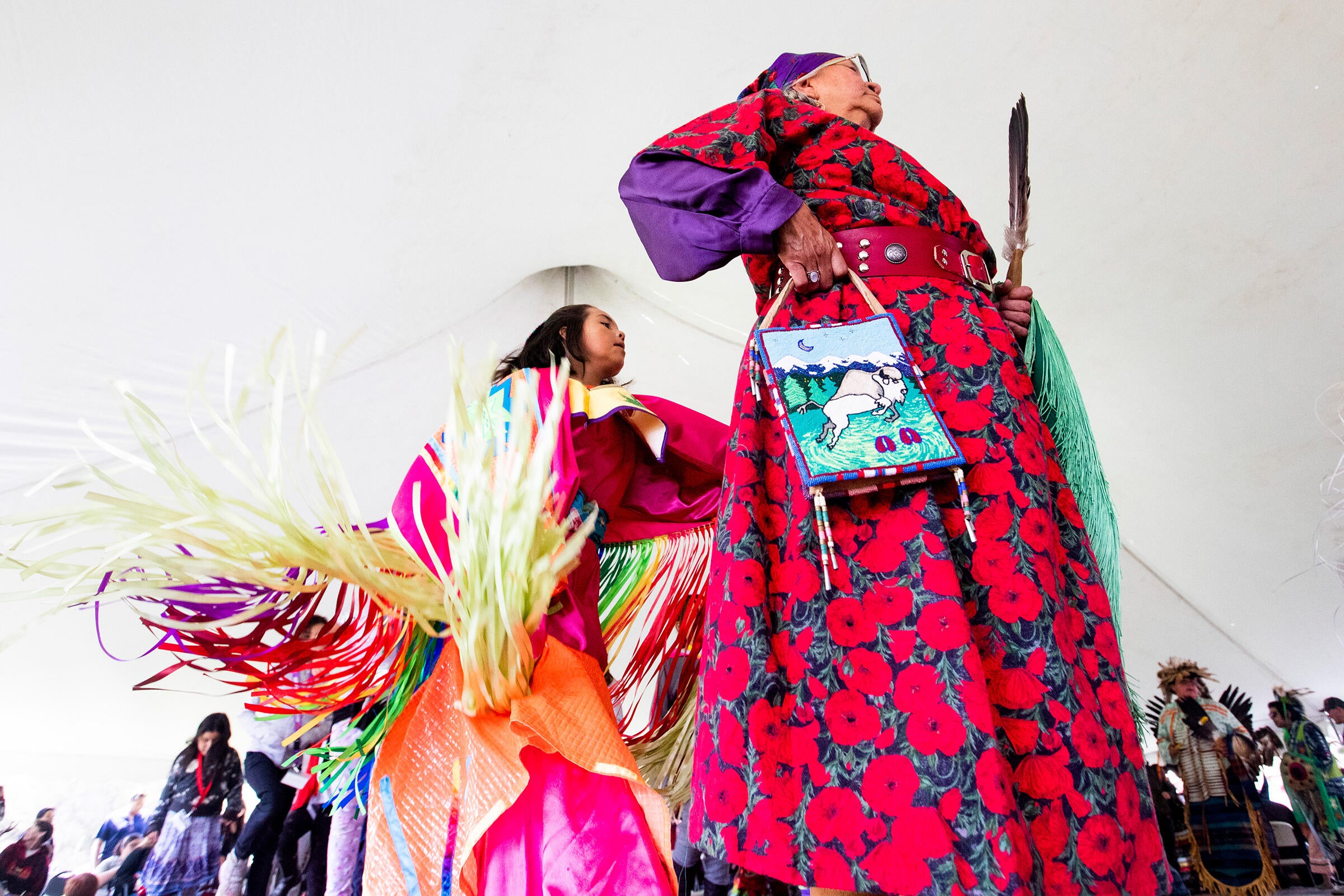 Dancers celebrate the transfer of the Bison Range back to the Confederated Salish and Kootenai Tribes during a powwow in May 2022. Photo: Tailyr Irvine 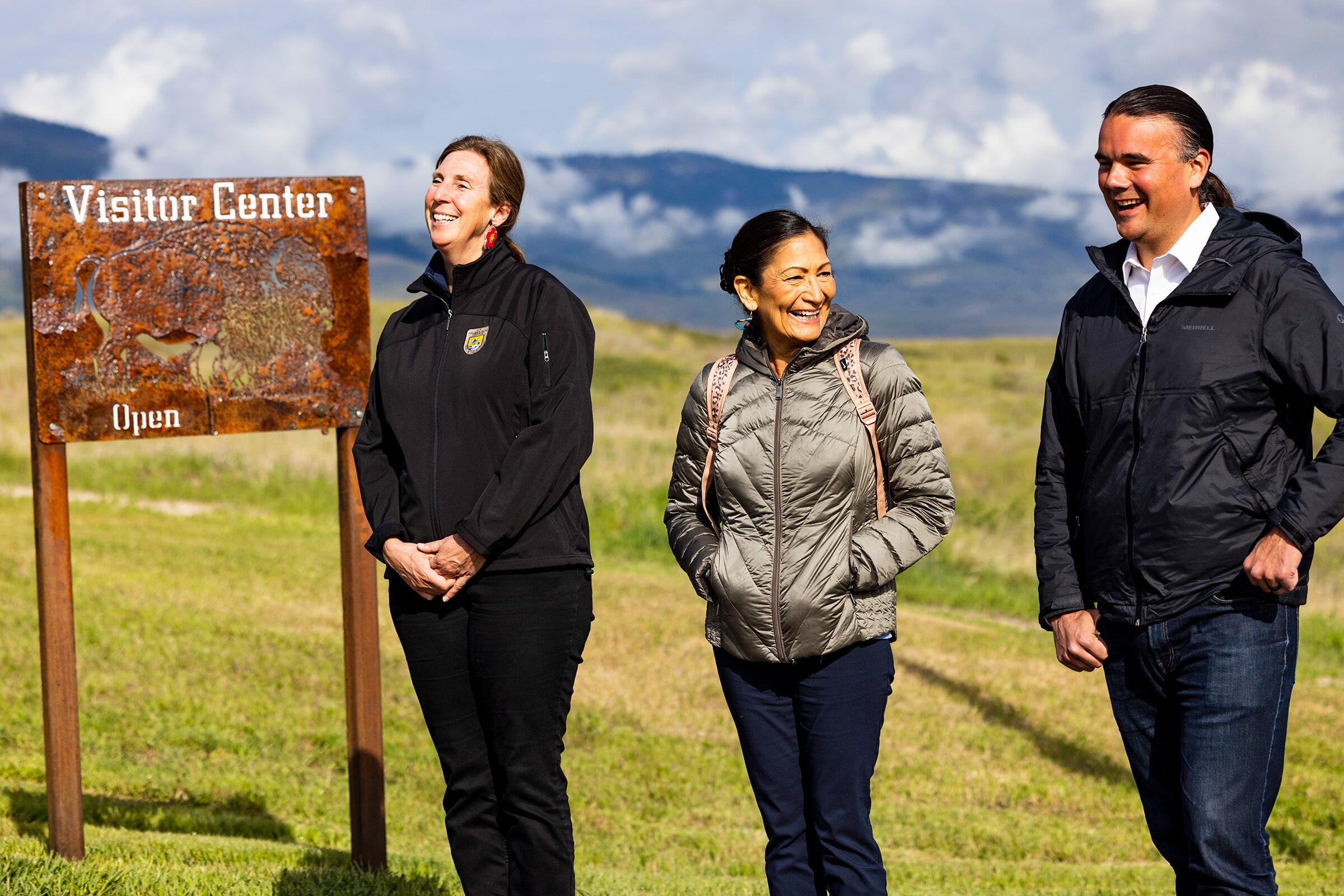 Secretary of the Interior Deb Haaland (middle) with her team before a tour of the Bison Range during the transfer celebration. Photo: Tailyr Irvine

Seek out buffalo, elk, and dozens of bird species as you wind along the Bison Range’s three wildlife viewing drives. First, stop at the visitor center to pay a $10 vehicle entry fee and explore exhibits about the site’s tribal history, culture, and wildlife. You’ll learn the Indigenous names and significance of species you may spot: The song of Western Meadowlarks, for example, heralds summer’s return. For a tougher trek, buy a permit to hike the Mission Mountain Tribal Wilderness.

The transfer creates new opportunities and challenges, says McDonald. People are moving to and visiting the region at historic rates, with tourists driving through the reservation to Glacier National Park. The CSKT aim to open a second Bison Range visitor center and entrance on the main road to Glacier to reduce the carbon footprint of exploring the refuge and to attract more people, whose fees are needed to help fund operations. And in contrast to the historic era of homesteaders flooding the West, the tribes now have a better chance to shape newcomers’ relationships to the landscape. They’ll share their history, culture, and ways of living—and how those practices carry into the future.

Buffalo have survived disease and slaughter, McDonald notes, and as drought- and heat-tolerant creatures, they’ll be resilient to climate warming. The CSKT will use stock from its herd to support other tribes restoring bison. Meanwhile, across the West, bison ranching is on the rise, and ecologists are embracing the species’ role in maintaining healthy prairie. The mammals graze grasses to varying heights, creating bird nesting habitat and water-filled wallows. McDonald is excited to share the message: “The time of the buffalo is coming,” he says. “They are a perfect symbol for endurance: that persistence will prevail.”

A River of Revival 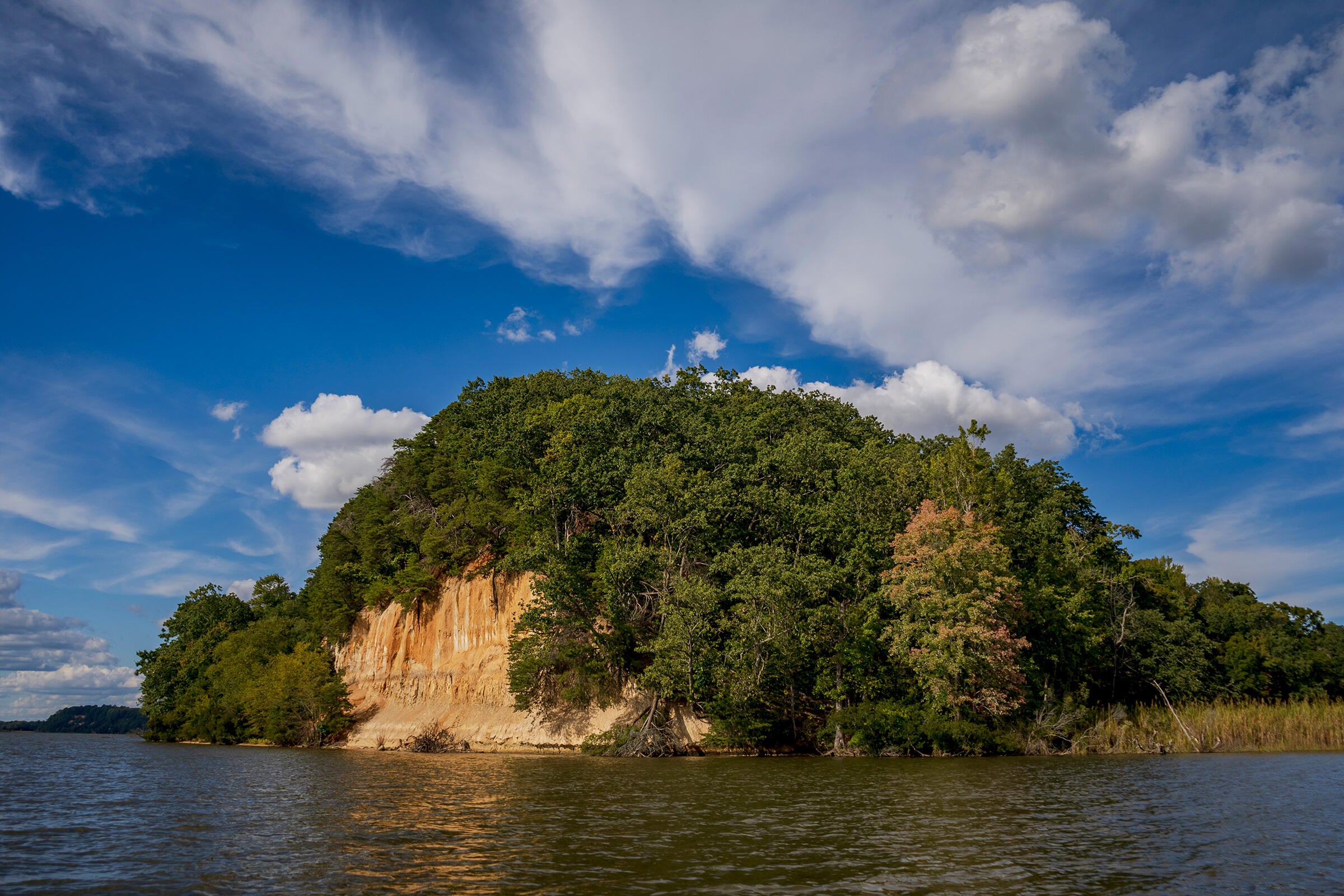 The Rappahannock Tribe in Virginia recently acquired Fones Cliffs in the heart of prime Bald Eagle habitat. The area was once the site of at least three Rappahannock villages. Photo: Carlos Bernate

Anne Richardson still recalls her father, then the Rappahannock Tribe’s chief, shedding tears 25 years ago when he entered the tribe’s new cultural center. “He said, ‘I never dreamed that I would live to see the day that we would have this back in our community—a place where we can gather and be together and be protected,’ ” she says.

Soon after, Richardson succeeded him as the fourth elected chief in her family of the Rappahannock in Virginia. Her ancestors were among the first Indigenous peoples of the United States to encounter Europeans. In 1608 when John Smith famously traveled the Rappahannock River, he documented Native villages as they volleyed arrows at him from the cliffs. By the 1640s illegal settlers encroached, and in the 1660s, forced removals began. More than 300 years later, in 1998, Richardson and others revived a long fight to restore sovereign rights to her people. In 2018 the tribe finally received federal recognition for the first time.

Earlier this year the tribe achieved another milestone: acquisition of 465 acres of woodlands and towering rock face overlooking the east side of Rappahannock River and its marshlands near Chesapeake Bay. The area, called Fones Cliffs, was once the site of at least three Rappahannock villages, and today it’s one of the most important nesting habitats for resurgent Bald Eagle populations on the East Coast. “Because the eagles are sacred birds to us, we don’t want to do anything to disturb them. We’re so glad they’ve come back,” Richardson says. “I believe that they’ve come back there waiting for us to return.”

Search for Bald Eagles when you visit Fones Cliffs, part of a globally significant Important Bird Area that hosts one of the East Coast’s densest populations of the species. Though the Rappahannock land isn’t yet open to the public, enjoy the area’s wildlife at the nearby Rappahannock River Valley National Wildlife Refuge. Or canoe or kayak on a portion of the 3,000 miles of water trail known as the Captain John Smith Chesapeake National Historic Trail. For a taste of the Rappahannock Tribe’s culture, seek out tickets to its annual powwow, held most recently in October 2022.

Several organizations helped facilitate the return of the land, where an ancestral village called Pissacoack stood. The tribe worked with conservation groups for years to fend off development on the larger Fones Cliffs area. A small portion was protected as part of the nearby Rappahannock River Valley National Wildlife Refuge, the site of another village called Wecuppom, in 2019. Later, a landowner approached the tribe and offered to sell his parcel, and a close partner, the Chesapeake Conservancy, worked with donors and grant providers to strike a deal. The nonprofit transferred the fee title to the tribe and a conservation easement to the FWS. Now Richardson, the Conservation Fund, and the other partners are seeking a way to protect a developer’s larger parcel—which the fund bid on in a sale in a bankruptcy auction in November—and preserve the iconic cliffs forever.

Activities at Pissacoack are ramping up as the tribe prepares to open the land to the public, possibly as soon as 2023. They are planning a network of trails and a replica 17th-century village, Richardson says, “so people can learn the truth of how we lived and who we are.” She also is expanding their Return to the River program, which trains tribal youth about traditional ecological practices, culture, and skills such as canoeing. John Smith once wrote he could “walk” on the river’s fish. That density, Richardson notes, was thanks to her ancestors’ stewardship. Today the Rappahannock are advising scientists on work to restore river herring—a traditional subsistence food—that have declined so drastically that they’re now illegal to fish in Virginia.

During a land transfer ceremony in 2022, Richardson once again saw elders weep: Though the Rappa­hannock already had some land, this expansive ancestral home on the tribe’s namesake waterfront hits differently. “It’s a strong foundation for long-term sovereignty for the tribe—like a stake in the ground, so to speak,” Richardson says. Tribal youth didn’t cry at the event; they exuded excitement. “They know that this is really all being done for them,” she says. “They have a responsibility now to steward this land into the future.”

A Place of Their Own