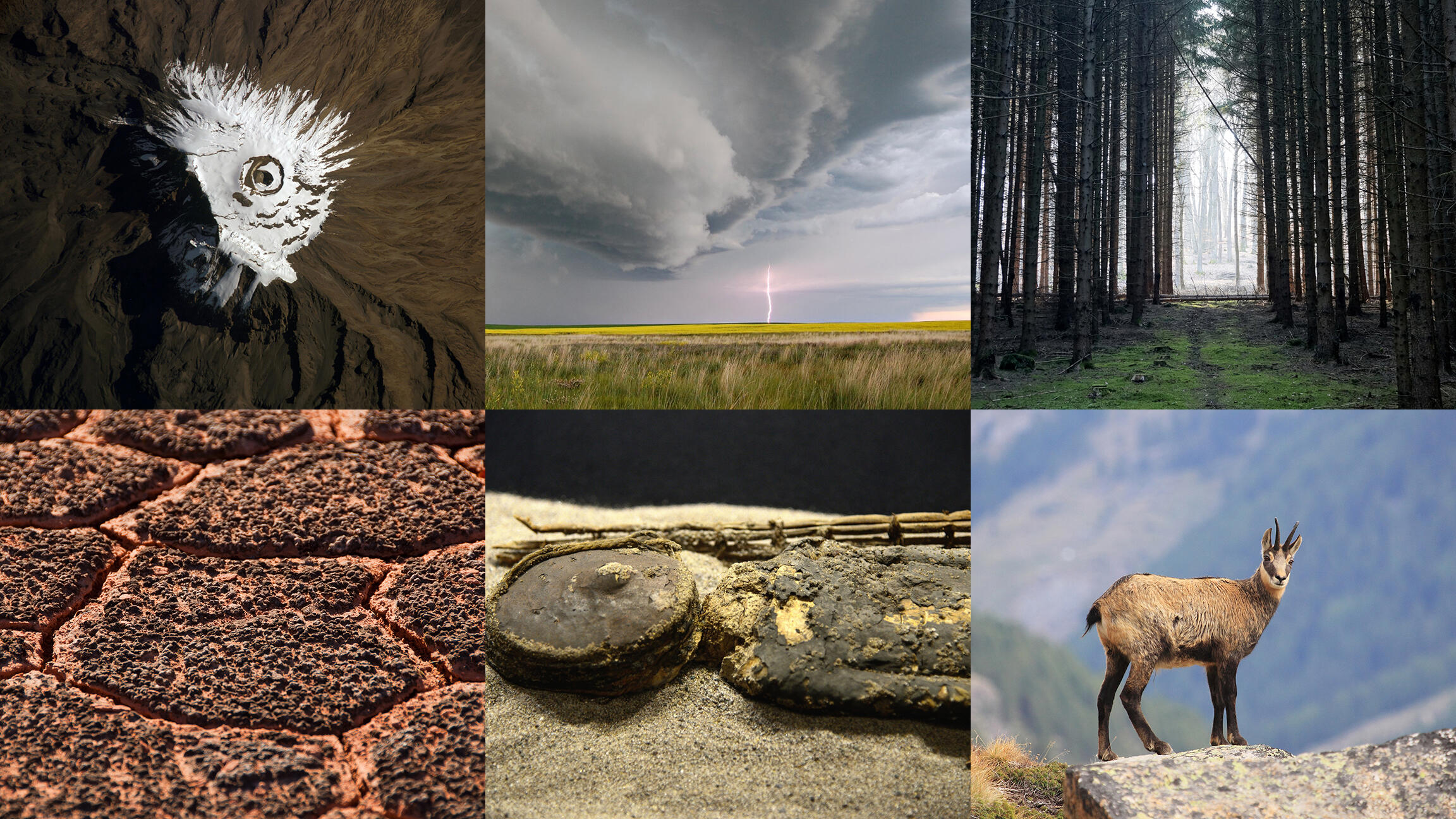 By Manon Verchot and Jesse Greenspan

You’ve heard climate change is going to cause rising sea levels and warmer temperatures. And you know that glaciers are melting, and storms are just going to get stronger and stronger. But these aren’t the only consequences. The earth will develop lots of exciting new features as it warms. Some you’ll love, others will be less…pleasant. Here are a few of the terrestrial surprises coming your way:

Warming temperatures have expanded climatic ranges for many invasive and disease-ridden insects, from mountain pine beetles in the West to dengue- and malaria-carrying mosquitos in Europe and North America.

It’s not all bad news: Climate change might limit other invaders. The big-headed ant, one of the world’s most invasive species, and one that has traditionally dominated any ecosystem it enters, may be stopped in its tiny tracks—or at least slowed down: A study of climate projections over the next six decades found that almost 20 percent of the ants’ climatic range will be lost as temperatures change. This might bring some relief to species that have suffered in the ants’ wake, like the Red-tailed Tropicbirds or Wedge-tailed Shearwaters, whose nestlings frequently fall prey to the fearsome Formicidae.

Some fish and amphibians are known to spontaneously change sex midway through life. But this behavior is new in wild reptiles, and climate change may be to blame. Excessively hot temperatures (above 90 degrees Fahrenheit) seem to be making male Australian central bearded dragons ignore their male chromosomes and grow lady parts, scientists reported in Nature.

Among 131 captured bearded dragons, 11 (all from particularly hot areas) had male chromosomes but lacked male sex organs. These dragons mated with other males, and even produced more eggs than true female dragons. The sex of their offspring was determined solely by temperature—producing a lot more male-chromosome females. This could seriously unbalance the population going forward.

More sediment and organic matter will make its way into the oceans—either because it’s washed in by increased rainfall, or dumped from a melted glacier. As a result, scientists predict that some oceans and seas will get murkier. This is most likely to happen around coastal zones and estuaries, which is exactly where many birds and fish feed.

Murky water makes it harder to hunt by sight, which means that birds including the Marbled Murrelet, gannets, and kittiwakes might struggle to find food. Other species, however, could thrive. “While it may impact some species negatively, it might actually make things better for other species,” says Dr. John Piatt, a research wildlife biologist at the United States Geological Survey.

That’s great if you’re enjoying the ongoing Rise of Slime: Increased precipitation in Norway, for example, is sweeping organic matter into the ocean, making it cloudy; as a result, some fish populations are declining while jellyfish populations boom.

But despite thriving in harsh desert conditions, bacteria in cold deserts may not be able to cope with heat brought on by global warming; others may take their place, and researchers aren’t sure what this will mean for the ecosystems. And because bacteria play a role in soil fertility they also help to slow down desertification; the replacement of one type of bacteria by another could have serious repercussions for the spread of deserts around the world.

Could rising temperatures also bring rising tempers? Recent research suggests they might. According to the analysis of 56 research papers on the subject, increased temperatures and fluctuating precipitation patterns are likely to cause an increase in both individual clashes, like fistfights, and larger brawls, like wars.

"Heat changes the way people feel and think, increasing anger and making thoughts of aggression increase," Richard Larrick, who studied the effects of heat on aggressive acts by baseball players, told the Washington Post. Since 2014 was the hottest year on record, best to hope the Ice Bucket Challenge cooled some people off.

Sea level rise is attributed to glaciers melting, but few people know some of the other effects of glacial melt—such as increased volcanic activity.

Glaciers are so heavy they weigh down on the earth’s crust. This prevents magma from reaching the earth’s surface. But as they melt—and they’re doing so quickly—this weight shifts from land to water, so eventually oceans could weigh more than land masses. Scientists theorize that this could cause more volcanic activity as the pressure on underground magma shifts. “While some effect from the changes in subsurface pressure on volcanic activity makes a lot of sense,” says Roland Burgmann, from University of California, Berkeley, “how important this effect is is more difficult to predict.” But we’re going to find out!

As the sea level rises, it makes sense that beaches are the first to go. Already, 70 to 90 percent of beaches are being wiped away by this rising waters, exacerbated by major storms.

Many governments trying to preserve their beaches have been importing fresh sand—or dredging it up from the sea floor. While this is already a temporary solution (the sand just washes away again), it’s about to get more difficult. There’s currently a sand shortage, thanks to demand from the fracking, glass, and cement industries.

Over the past 50 years, trees in Europe have been growing faster. Researchers from the Technische Universitaet Muenchen in Germany found that in some cases, tree growth has increased by as much as 70 percent. (Trees in rainforests are expected to follow suit, but haven’t yet, according to recent research.)

While there are multiple hypotheses to explain this phenomenon, researchers think higher levels of carbon dioxide and nitrogen in the atmosphere may contribute to tree growth. Those higher levels are thanks to climate change. “It's also a bit warmer than it was (up to 1 degree Celsius on average), and this means the period of growth is extended in spring and autumn,” says John Grace, from the University of Edinburgh.

The world’s oldest man-made mummies aren’t Egyptian—they’re Chinchorro, a fishing people that lived along the coast of present-day Chile and Peru. For upwards of 7,000 years these mummies—prepared via de-fleshing the bodies and stuffing them with plant fibers—remained well-preserved in the bone-dry Atacama Desert, but that’s coming to an end.

In the last decade, the mummies have begun to rapidly deteriorate, with some even turning into black ooze. Rising humidity levels, possibly caused by climate change, may be to blame—the humid air facilitates the growth of mummy-chomping bacteria, Harvard researchers announced this March. Climate change may put other historical artifacts under siege too, from outdoor marble statues  to the ancient frozen tombs of Siberia.

It’s hard to focus when it’s hot. And thanks to climate change, many places in the world are getting more and more scorchers. As a result, employee productivity is suffering, according to several recent papers.

In hotter-than-average countries like India and Thailand, for example, a mere one-degree Celsius rise could reduce economic output by up to 3.9 percent per country, according to a 2014 discussion paper from two Ivy League professors. Air conditioning mitigates some of these negative effects, but not for outdoor workers or those in poorer countries that can’t afford it. (Of course, air conditioners also contribute to climate change.) Even math test scores decline in the heat—though, curiously, not reading ones—a different group of researchers found in 2012.

Yes, seriously. With warmer temperatures come smaller goats. Since the 1980s, Alpine goats—also known as Chamois—have lost an average of 25 percent of their body mass, and climate change is likely to blame.

In the last 30 years, Chamois’ alpine home has warmed by 4 degrees Celsius (7.2 degrees Fahrenheit), so the Chamois now spend more time basking in the sun and less time looking for food. “If climate change results in similar behavioral and body mass changes in domestic livestock," study co-author Dr. Stephen Willis says in a press release, “this could have impacts on agricultural productivity in coming decades.”

Lightning strikes will increase thanks to—you guessed it—global warming, according to researchers from University of California, Berkeley.

Lightning occurs when electrical charges build up within the water vapor of a cloud. Warmer temperatures mean there will be more water vapor trapped in the atmosphere, leading to more lightning.

Scientists expect lightning strikes to increase by about 12 percent for every degree Celsius gained.