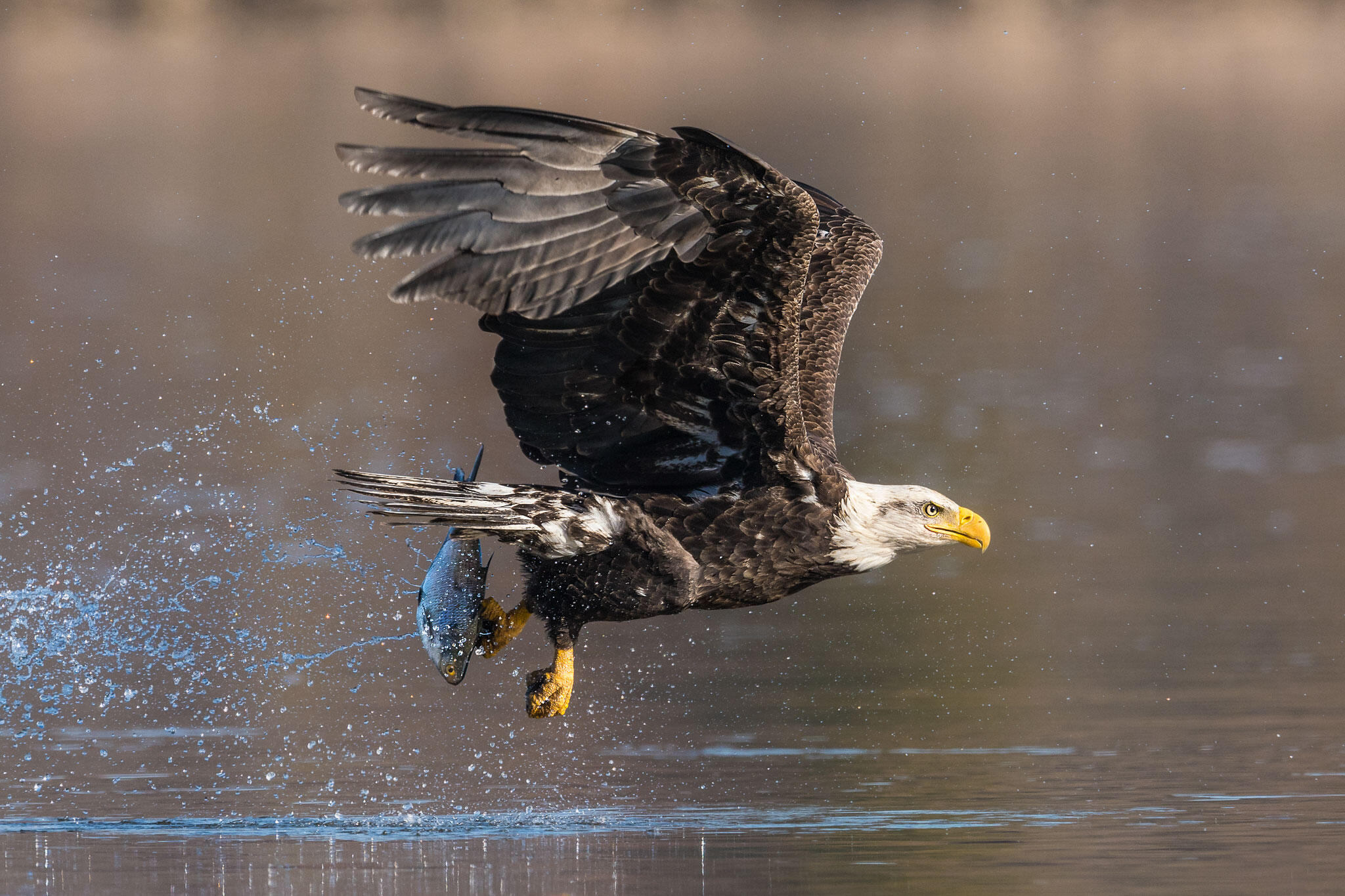 Before the MBTA, Bald Eagles were frequently electrocuted by power lines. The threat of prosecution under the law encouraged utilities to develop bird-safe guidelines to minimize unnecessary deaths. Photo: Mark Boyd/Audubon Photography Awards

The bipartisan group’s letter calls an updated reading of the law “a new, contrived legal standard” that would let industry kill birds with no penalty.

The signatories include two former deputy secretaries and three former assistant secretaries of the Interior Department, and five former directors of the U.S. Fish and Wildlife Service. It also includes seven former chiefs of migratory bird management, whose service spans nearly half a century, from 1972 to 2017, under every president from Nixon to Obama. The position is currently vacant under the Trump administration.

“All the past administrations for which we have worked have struck a balance and worked diligently and in good faith with industries that had significant impacts on birds,” they write. “We respectfully request that you suspend this ill-conceived opinion, and convene a bipartisan group of experts to recommend a consensus and sensible path forward.”

The “ill-conceived opinion” they cite is a Solicitor’s opinion, issued just before Christmas, that reinterprets the law that makes killing over 1,000 species of migratory birds illegal. “It shall be unlawful to hunt, take, capture, kill . . . by any means whatever . . . at any time or in any manner, any migratory bird,” the law reads. It’s a strict law, and over the past century, courts have ruled that anyone who kills migratory birds for any reason—even if they did not intend to kill birds—is potentially liable for fines or jail time.

In practice, the U.S. Fish and Wildlife Service, which directs prosecution under the MBTA, reserves it for the most egregious cases: hunters who actively pursue migratory birds, and industrial facilities that ignore direction from the agency to install safeguards to prevent unnecessary bird deaths.

The new opinion, in contrast, concludes that killing migratory birds is illegal only when “the actor [is] engaged in an activity the object of which was to render an animal subject to human control”—a stance multiple courts have rejected. This excludes industries that aren’t in the business of killing birds, but whose equipment or facilities entrap, electrocute, poison, or otherwise kill them by accident.

The opinion was written by Daniel Jorjani, a longtime adviser to libertarian billionaire Charles Koch, who co-owns Koch Industries, a chemical refining and manufacturing corporation. Zinke appointed Jorjani as Interior’s Principal Deputy Solicitor in May.

“This legal opinion is contrary to the long-standing interpretation by every administration (Republican and Democrat) since at least the 1970’s, who held that the Migratory Bird Treaty Act strictly prohibits the unregulated killing of birds,” the former DOI leaders continue.

Many of these deaths are easily preventable, and through the decades industries have partnered with conservation groups to develop solutions.

Many of these deaths are easily preventable, and through the decades industries have partnered with conservation groups to develop solutions to avoid prosecution under the MBTA. In 1989, for example, the National Audubon Society partnered with electrical utilities and the government to form the Avian Power Line Interaction Committee, which aimed to prevent collisions with and electrocutions on power lines. This is a problem for eagles and other raptors, which perch on poles and lines to rest and scan for prey. The committee identified some simple best practices, such as stringing markers on power lines to make them visible to birds in flight; spacing lines wider than an eagle’s wingspan to prevent electrocution; and installing diverters to obstruct birds trying to nest on top of power poles. While these efforts don’t eliminate bird deaths—electrical transmission still kills tens of millions of birds every year, according to USFWS estimates—companies that attempt to minimize that figure avoid further scrutiny under the MBTA.

The letter’s signatories have decades of experience working with many industries to develop guidelines for each “to reasonably address unintended take,” they write. “It can be done. In fact, it has been done.” Thanks to their efforts, oil- and gas-processing facilities that store toxic waste in open ponds suspend nets to prevent water-seeking birds from landing—and some experiment with more high-tech solutions. Communications towers flash their lights and point those lights downward to avoid attracting birds. Commercial fisheries hang streamers from longlines to scare seabirds away from baited hooks.

Zinke’s reading of the law—“a new, contrived legal standard that creates a huge loophole in the MBTA” in the words of the former Interior Department leaders—offers little incentive for companies to invest time and money to prevent unnecessary bird deaths. “They won’t have to, legally,” says Garry George, the renewable energy director for Audubon California who’s worked with industries on making their equipment safe for birds. “They could still have goals to protect birds through best management practices because it’s the right thing to do. But all companies would not have to think about it or do anything because the liability would be gone.”

The MBTA has long had a target on its back by a range of interests that find it too strict and cumbersome. Indeed, a review of federal disclosure forms found 12 companies, representing wind, solar, oil, natural gas, electric power, and manufacturing industries, that specifically listed the MBTA as a lobbying target during 2017.

Their incentive for weakening the MBTA, though typically unspoken, is intuitive: Equipment central to these industries’ work regularly kills birds, and they don’t want to shoulder the legal liability or invest time and money into prevention. “Most of the managers who work with the MBTA, we work with them to find paths forward,” George says. “But the higher echelons for the companies would rather just get rid of the obligation. So that’s their strategy.”

In their letter, the former DOI heads, with decades of experience between them, urge Zinke to reconsider his reinterpretation of the MBTA and work with them to instead find a solution that balances development and conservation. Failure to do so wouldn’t just be bad for birds, but also for the country as a whole. "Your new interpretation needlessly undermines a history of great progress, undermines the effectiveness of the migratory bird treaties, and diminishes U.S. leadership,” they write.