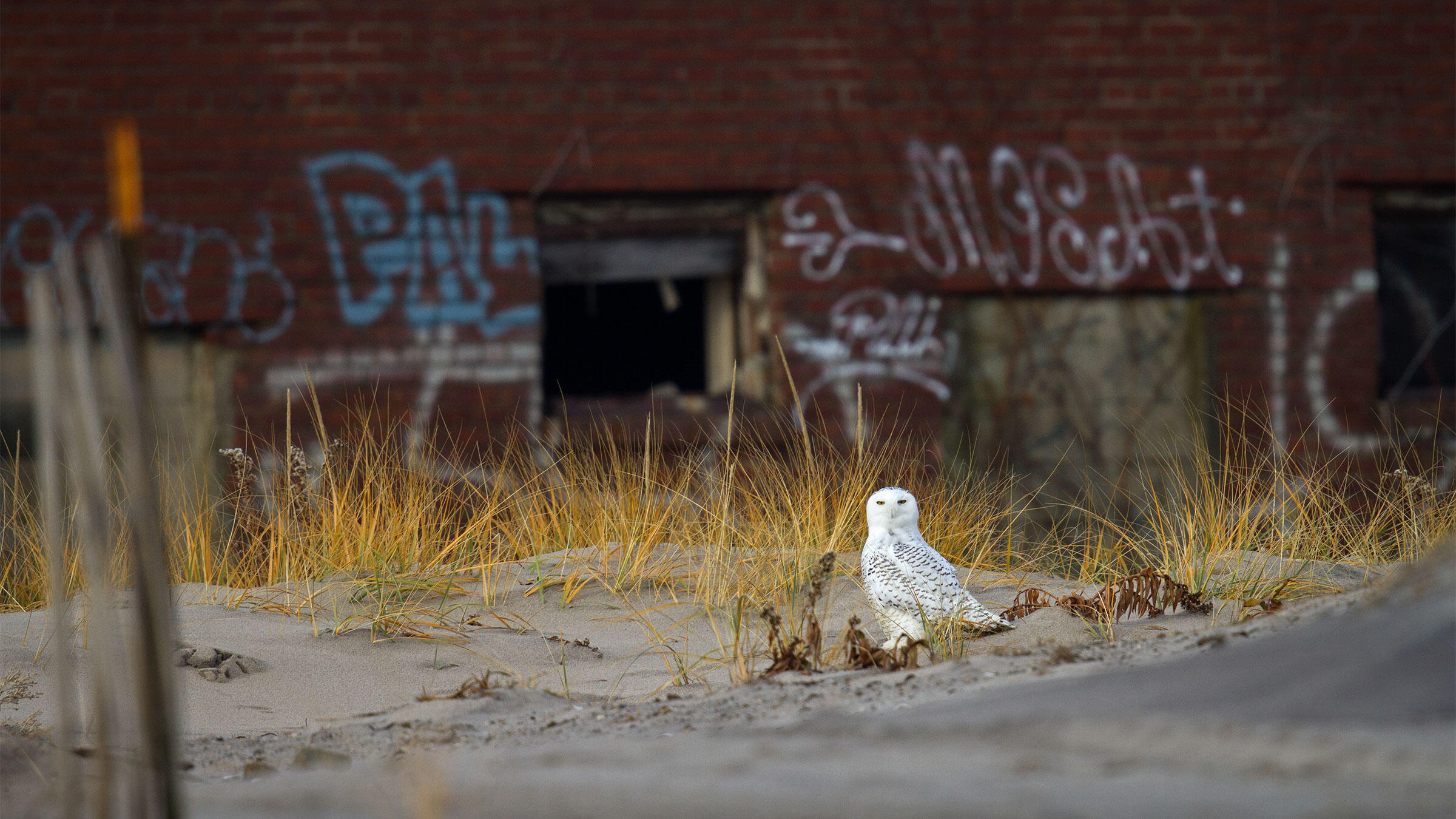 Snowy Owls are typically found in Canada and the Arctic, but occasionally, they'll wander south during the winters, frequenting airport tarmacs and other flat stretches around Northeastern U.S. cities. Photo: Francois Portmann

A Guide to Finding Urban Owls

You don't have to live in the middle of the woods to see an owl. Here's how and where to spot five species in towns and cities across the U.S.

Owls aren’t always the secluded, deep-woods birds we make them out to be. In fact, they could be lurking a lot closer than you think—maybe as close as that woodsy little park across from your favorite bodega, or that shady cemetery next to the freeway.

Of the 30-plus species of owls in North America, several have learned to thrive in urban spaces. The living isn’t always easy—city owls are sometimes struck by cars or poisoned by rodenticides—but they’re drawn to the endless glut of food items such as rats and sparrows, especially in winter. Owls can easily see and seize prey scurrying across manicured lawns and park fields, and they love nesting and roosting in big, old trees that line neighborhoods and streets. Sometimes they might even nestle up to a light or utility pole.

Point is, cities and towns provide great landscapes for “owling.” Before you head off, however, you need to know where and when to find them. While owls are largely active around dusk and at night, it’s much easier (and safer) to look for them by light of day. Winter is also the best season to scout. The leafless branches make it easier to scan for roosting birds, and if you're lucky, you might even find one uncommon visitor from the Arctic or boreal forest venturing south in search of food.

Also, if you are going to look for owls during the day, it's important to remember that they’re probably resting at that time. So give them space and try not to blow their cover to other animals. When toting a camera along, always remember: A close-up photo isn’t worth an owl’s distress.

With all that in mind, it's time to go find some urban owls. Here are five species that provide the greatest chance of success across 49 U.S. states (sorry Hawaii).

Where to look: These pint-size raptors tuck their bodies into tree cavities in deciduous or mixed woodlands and tend to stay close to water. Check treed backyards, arboretums, parks, and cemeteries.

Rarity factor: In terms of owls, they’re common, which means you might be able to find a few on a good outing. But you'll have to look closely: Their streaked, muted feathers make them hard to spot against tree bark.

Screech-owls are the smallest species on this list, ranging from 6 to 10 inches in height. They’re stubby with pointed ear tufts, and their coloration varies from gray to red. They hunt insects, House Sparrows, Northern Cardinals, mice, and more.

The birds often sit right at the entrance of a cavity, basking in the warm sun. But don’t just let your eyes guide you; listen for the scolding calls of angry chickadees and other songbirds. At night you may hear an Eastern Screech-Owl’s whinny (yes, it actually sounds like a high-pitched horse) or a Western’s bouncing-ball call.

You can also try attracting screech-owls to your yard. They’ll take to birdbaths and nest boxes.

Where to look: You can find this species lingering in patches of coniferous and deciduous woods near a water source. Older suburban neighborhoods with big, mature trees might attract Barred Owls, along with parks with scrub-free grounds.

Rarity factor: They’re quite common in the eastern United States, with a range expanding out to Texas and the Pacific Northwest.

Barred Owls are cream and brown birds with dark eyes (uncommon for owls), rounded heads, and no ear tufts. During the day they rest up in branches. Listen for angry jays and other birds mobbing them, and squirrels and chipmunks scolding them from afar. Also keep an eye out for whitewash on tree trunks (poop) and owl pellets (regurgitated blobs of fur and bones). You may hear them hooting during the day; their distinctive call sounds like who-cooks-for-you, who-cooks-for-you-all.

They have similar habitat tastes as Red-shouldered Hawks. If you see one raptor, you might see the other. 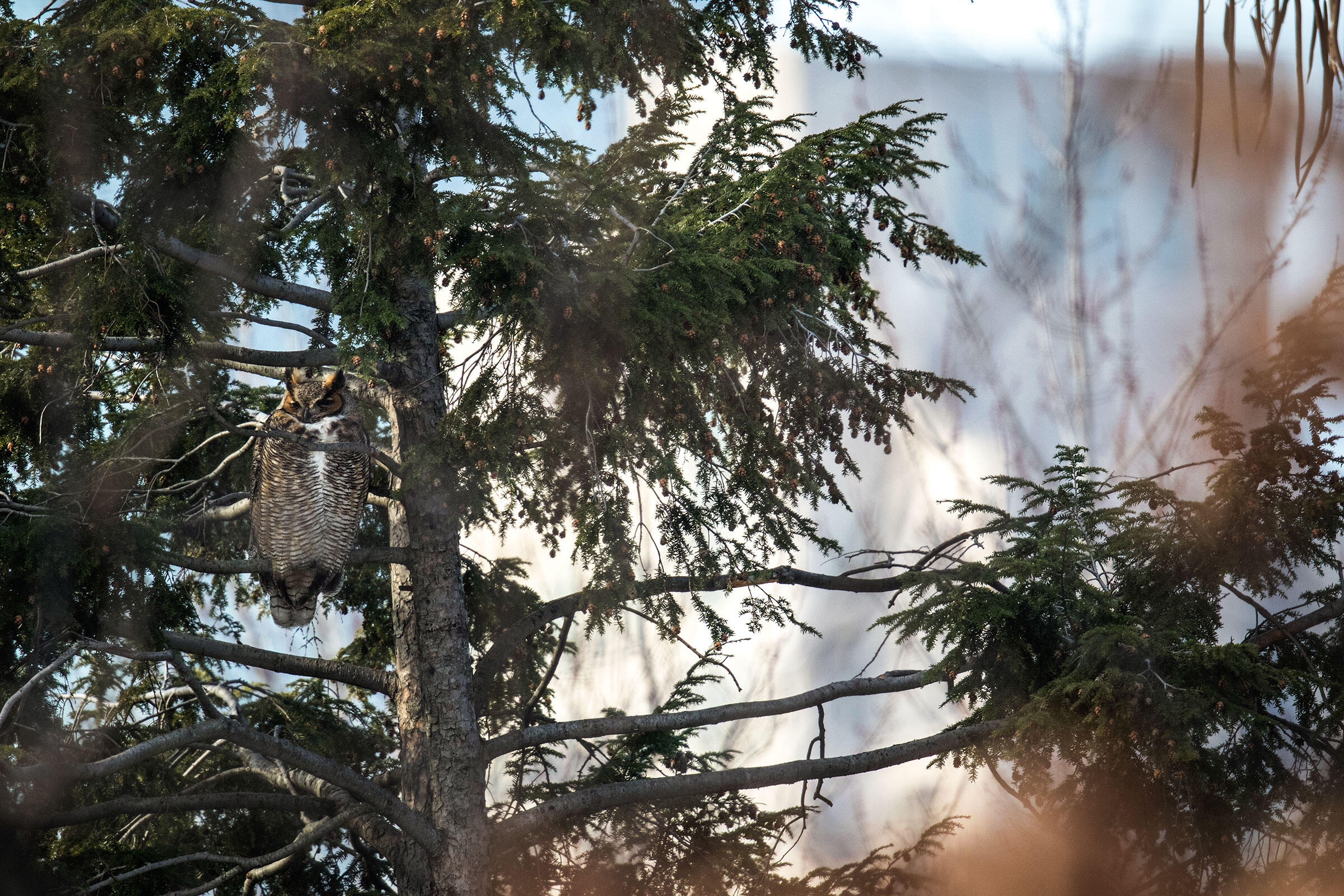 Where to look: Flexible and adaptable, Great Horned Owls inhabit areas with trees, the open country, and the edges between woods and meadows. Try cemeteries, large city parks, or botanical gardens.

Rarity factor: They’re one of the most common owl species and are found across the continent, but they have big territories that they fiercely guard. So finding just one is an accomplishment.

Great Horneds are probably the biggest owls you’ll come across. Their most obvious characteristic is their feathery ear tufts, or “horns.” They hunt mammals in the city, but will also eat insects, carrion, and birds, including other owls.

If you’ve noticed a large nest way up in a tree, give it a quick inspection. These owls breed as early as January in nests borrowed from mammals and birds, particularly Red-tailed Hawks. In fact, like Red-tails, they thrive in fragmented habitats created by human development.

During the day, Great Horned Owls roost on branches next to the trunk. They prefer to sit high up in conifers, which can make them tough to see amid dense needles. Scan slowly up tree trunks and look for whitewash and pellets. Also watch out for angry crows making U-shaped swoops, and listen for squirrels and chipmunks making distress calls. You might hear a Great Horned’s gravelly hoots at dusk: They’re very territorial and are quick to sound off—sometimes in pairs—to warn away intruders.

Where to look: These raptors will haunt flat, tundra-like places that mimic their typical northern hunting grounds. Airport tarmacs and beaches are your best bets around cities.

Rarity factor: Snowies are a real treat. During winter, they’ll dip down to the northern United States; but in some irruption years they might push farther south, even to Florida.

True to their name, Snowy Owls are blizzard-white with a scattering of black spots. Here in the Lower 48 they hunt ducks, gulls, rats, and more. Though they steer clear of heavily inhabited areas, they’re famous for hunkering down at airports, beaches, fields, and other open areas. Look for distant white lumps on the snow and also check high perches such as lampposts or hay bales.

If you’re really itching for Snowy sighting, check out Project SNOWstorm. You can track five different individuals through the winter and possibly even spot one if it wanders close to you.

Where to look: This isn’t a real city species, but it can be found just a short drive away in grasslands or fallow farm fields.

Rarity factor: They’re not common but are widespread, wintering across much of the lower United States and breeding in Western prairies and wetlands. You may find multiple if you visit a hot spot.

Cream and brown, Short-eared Owls have slim, elegant wings. They’re fun to watch in flight as they tussle and hunt over open fields. They might emerge in the middle of the day, especially when it’s cloudy, but otherwise look for them at sunset. They prefer the same habitat and prey as Northern Harriers, so use the hawks as a clue.