A Hat Tip to the Women Who Started Modern Bird Conservation in the U.S. 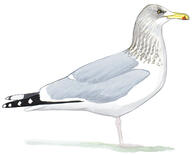 But a little more than a century ago, the city’s birding scene wasn’t thriving—it was dead. An outing in the park would turn up hundreds of birds, stuffed and perched on people’s heads. During his infamous feathered-hat census in 1886, ornithologist Frank Chapman counted 40 species of Aves, including Ruffed Grouse, Cedar Waxwing, Northern Flicker, and Snow Bunting, on 542 different women. Meanwhile, Herring Gulls were being hunted for their eggs and skins, and had all but vanished from the river. Egrets, spoonbills, and other waterbirds were on the verge of extinction as well.

Chapman’s findings sparked outrage, especially among wildlife-loving women who preferred live birds to taxidermy. Banding together under the banner of the early Audubon Society, they went straight for the source of the slaughter: the fashion industry. They boycotted hatmakers and shopkeepers to put feathers out of style, and lobbied for protections against poaching nationwide, paving the road for the Migratory Bird Treaty Act (MBTA).

Now, a hundred years later, they’re at the heart of the New York Historical Society’s timely exhibit, “Feathers: Fashion and the Fight for Wildlife.” Launched in partnership with NYC Audubon and the U.S. Fish and Wildlife Service, it celebrates the centennial of the MBTA, along with the female juggernauts who popularized the save-the-birds movement.

The three-part exhibit, which runs until July 15, opens with a tour of an elite 19th-century wardrobe. Big-ticket items include a set of honeycreeper-encrusted earrings, a hand muff woven from “kissing” Herring Gulls, a barely worn gown fringed in swan feathers, and a diamond and gold crown topped with egret plumes. Ironically, these sartorial status symbols were also meant to be protective, says Roberta Olson, the curator of drawings at the New York Historical Society. “Nature was disappearing [in the 1800s],” she explains. “[Fashion] was society’s way of taming and keeping it.”

Soon, however, the upper class had a more sustainable means of appreciating wildlife. With the advent of the first portable camera (1888) and the first field glasses (1894), birding became a real pastime. “People realized they didn’t have to shoot birds to see them,” Olson says. At the same time, conservation—through ethical fashion, habitat preservation, and more—was playing a bigger role in feminism, and vice versa. “Women were empowered with the suffrage movement and realized they could make a difference to spread the appreciation of birds and their conservation beyond the realm of ornithology,” says Olson’s co-curator on the exhibit, Debra Bach. The avian motif became so popular, supporters wore bluebird pins for solidarity during state suffrage votes.

Progress was coming down hard and fast on America; women were founding Audubon chapters, illustrating and writing field guides, and using their social capital to spread awareness about the importance of birds. The second chapter of “Feathers” is devoted to this tenacious class of conservationists. It features icons who’ve been written into history—Harriet Hemenway, Minna Hall, Mabel Osgood Wright, Florence Merriam Bailey—along with those who’ve escaped recognition. There’s Mary Sage from Long Island, who bought a Ford Model T just to travel and teach children about birds. There’s Lilli Lehmann from Germany, who turned her opera fame into a soapbox for environmentalism. And then there are the working women who stitched piles of Audubonnets, the term given to the bird-friendly designs that took the industry by storm after the anti-poaching campaign. “Wherein beauty is achieved without robbing the feather kingdom,” promised one Audubonnet ad.

The war against fashion also came with consequences. “It had an economic effect on immigrant families,” Olson says. As hat buyers made sacrifices for birds, their boycotts cut into factory wages for the masses. Conservation had become a sphere for women, but most of those women were rich, white, and blind to certain hardships.

That’s less so the case today. There’s a stronger sense of social consciousness among conservationists—a group that now encompasses women from diverse economic, ethnic, and sexual backgrounds. If “Feathers” was recast to tell the story of modern bird conservation, it would focus on the crisis of habitat loss, Olson and Bach say. But it would also have a much larger cast of heros to call upon. Women who’ve stood up to environmental threats around the world, despite grave dangers; women who patrol the woods, plains, and streets to collect data on birdlife; women who’ve turned Audubon into a grassroots and national force; and women who make sure nature can be enjoyed by everyone.

The exhibit ends with John James Audubon’s timeless paintings, which Olson says, served as “prescient warnings about the loss of habitat and species.” For decades, they galvanized avian champions—but as the record now shows, it's feminists that helped keep birds on our conscience.

The Migratory Bird Treaty Act is under attack! Show your support for America's oldest bird law by contacting your representative today.

After 96 Years, Betty Reid Soskin Is Still As Fierce As Ever

In her new memoir, 'Sign My Name to Freedom,' the activist, pioneer, and National Park Service ranger reflects on the many lives she’s lived.

Just in Time for Thanksgiving: A New Audubon Exhibit With the Gallant Wild Turkey as the Lead

The New-York Historical Society debuts its most ambitious display of 'Birds of America' artifacts yet, slated for 36 years of exhibition.

Audubon Spotlight: Desiree Loggins Is Building a Diverse Coalition by the Border

As a regional network manager working in the Southwest, Loggins unites communities to fight against a wall that would harm birds and people.