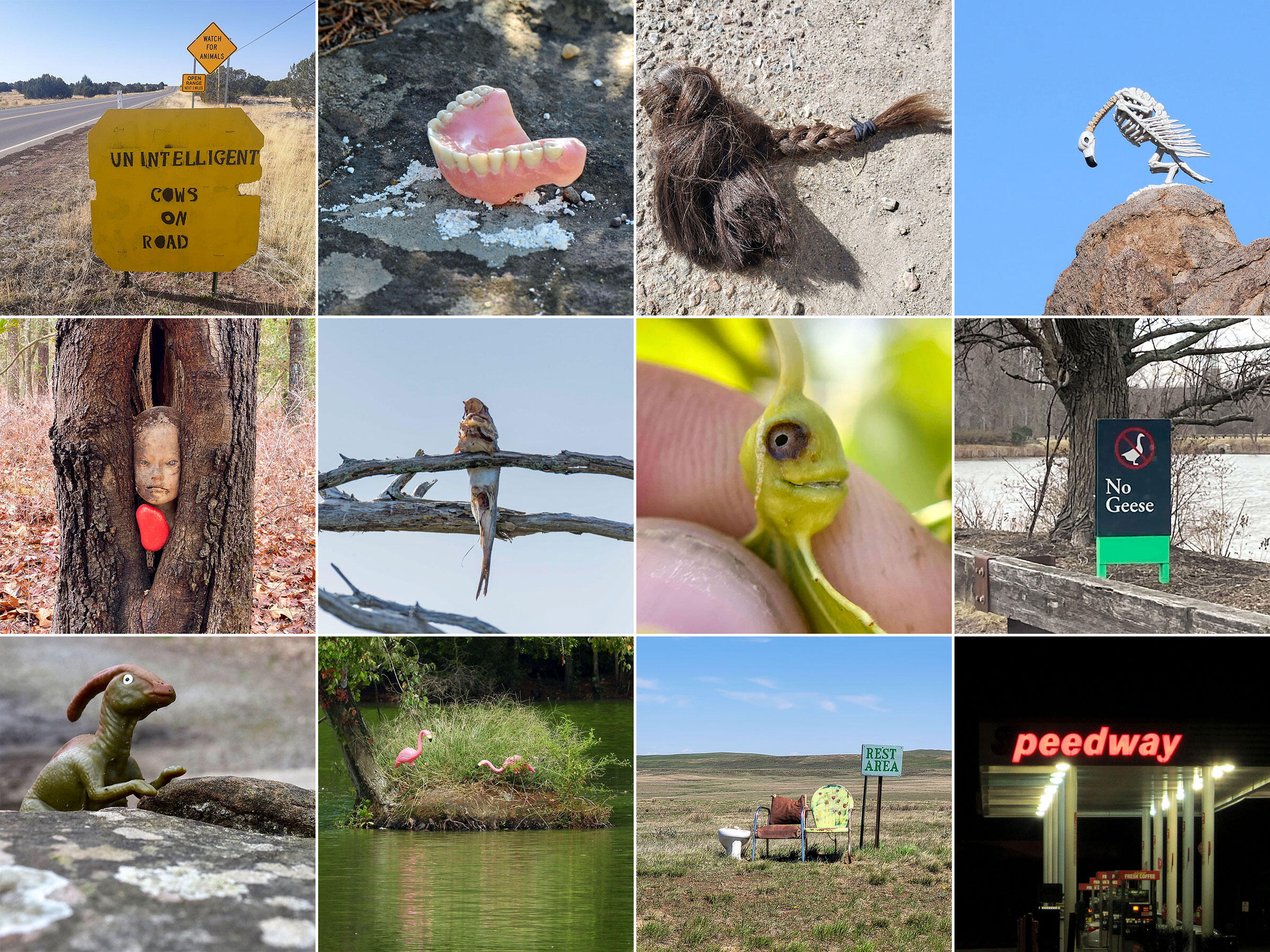 A Long-Running Ode to the All the *&#% Birders See

A 10-year-old Facebook group celebrates the surprising and weird sightings that can mark a birding trip—no actual birds required.

It all started a decade ago with a dark early morning and a little too much coffee. Julie Davis and Jackie Bain, along with their husbands, were making the two-hour drive on New Year’s Day to contribute to the Audubon Christmas Bird Count. They were in Circleville, Ohio, about halfway to their destination, when both women realized almost simultaneously that they urgently needed a pit stop.

They pulled over at the closest gas station and looked up. With a burst of hysterical laughter, they knew they were in the right spot: The first letter of the Speedway’s bright orange sign was not illuminated. It read: “peedway.” Davis, board chair of the American Birding Association, was practically in tears. “I mean, it was just so funny,” she recalls.

They snapped a photo and knew it needed to be shared. And not just that photo, but all of the weird, funny, surprising, and breathtaking sights they and other birders see every time they step out into the unknown. Many have nothing to do with birds.

The result was “Sh*t Birders See (other than birds),” a Facebook group that today— to the surprise of its founders—just passed its 10-year mark. True to its name, its more than 6,000 members post all kinds of highlights from their birding trips—except photos of birds.  Generally, it’s a celebration of the unexpected.

In just recent months alone, there’s been an indigo snake taking a bite out of a rattlesnake in Texas, and the dead fish perched in the interlocking branches of a tree on Merritt Island in Florida (possibly left by the many Osprey nearby). Quirkier offerings include a glass jar containing exactly $1.60 in change, balanced on cairn in the Connecticut woods (alongside a Barred Owl photo, just to “prove” they were really on a birding trip). One participant wasn’t so sure they would ever use an underground tornado shelter they stumbled across—at its entrance hung a sign warning “Caution Pesticides.” Sometimes the postings veer towards the creepy: While birding in Newfoundland, Canada, one group member came across an unsettling trio of women’s mannequin heads displayed on tree trunks (at least the display was in front of a beauty shop).

In creating this space for bird enthusiasts, the two women aim to help showcase what many birders know intuitively: the power of their hobby as a gateway to closely observing and appreciating the broader world. “[Birding] gives you the chance to get out there and open your eyes,” says Davis, who now lives in South Carolina. “And yes, you're looking for this one thing, but then if you're observant—and birding teaches you to be observant— that's kind of how it mushrooms into something bigger.”

Bain, who previously worked as a naturalist and now serves as an educator for a health department, explains that birding can take you into places where you can’t help but stumble on something different than you would in heavily-trafficked locales. “It's not like you just go to a national park and okay, there's all your critters,” she says.

Aside from its playful name, Sh*t Birders See, and the concept behind it, isn't a standalone idea—it ties into a trend in birding. As a whole, many are opting to slow down to observe what’s around them, rather than ticking a bird species off a list. At the Wisconsin Society for Ornithology’s Green Birding Challenge, which helps to encourage fossil fuel-free birding, participants walk, bike, or canoe to see birds. A selling point of ditching the car: It offers extra time to appreciate the journey. There’s also the growing concept of “slow birding,” which involves practicing a more measured approach, while building a stronger connection to the local landscape and oneself.

Today, Davis and Bain said they spend about five to 10 minutes a day managing the Facebook group—everything from approving new members to looking over some of the dozens of posts made every month. Bain said they’ve had very few problems with members posting malicious comments or angry messages. She said occasionally some of the posts will be a little “off color.” And by that: “I mean, a lot of people post poop,” she says.

Kari Warner, who has been birding for about eight years, said being a part of the group for the last several years has prompted her to look beyond the lens of her binoculars. “It makes you a little more aware of your surroundings. You’re noticing more from the neighborhoods you drive in to the parks that you’re at, and even different cars in the parking lot,” says Warner, who works as a business analyst for The Nature Conservancy.

Soon after she joined, she was in a large park to do some early morning birding when she noticed seven kittens seemingly dumped from a white van. She decided to call off birding for the day to collect them. With the help of a friend, she got them to shelters and homes. She took two in herself. Warner said through the group and birding overall, she’s learned a very important lesson: “The more observant you are the better.”