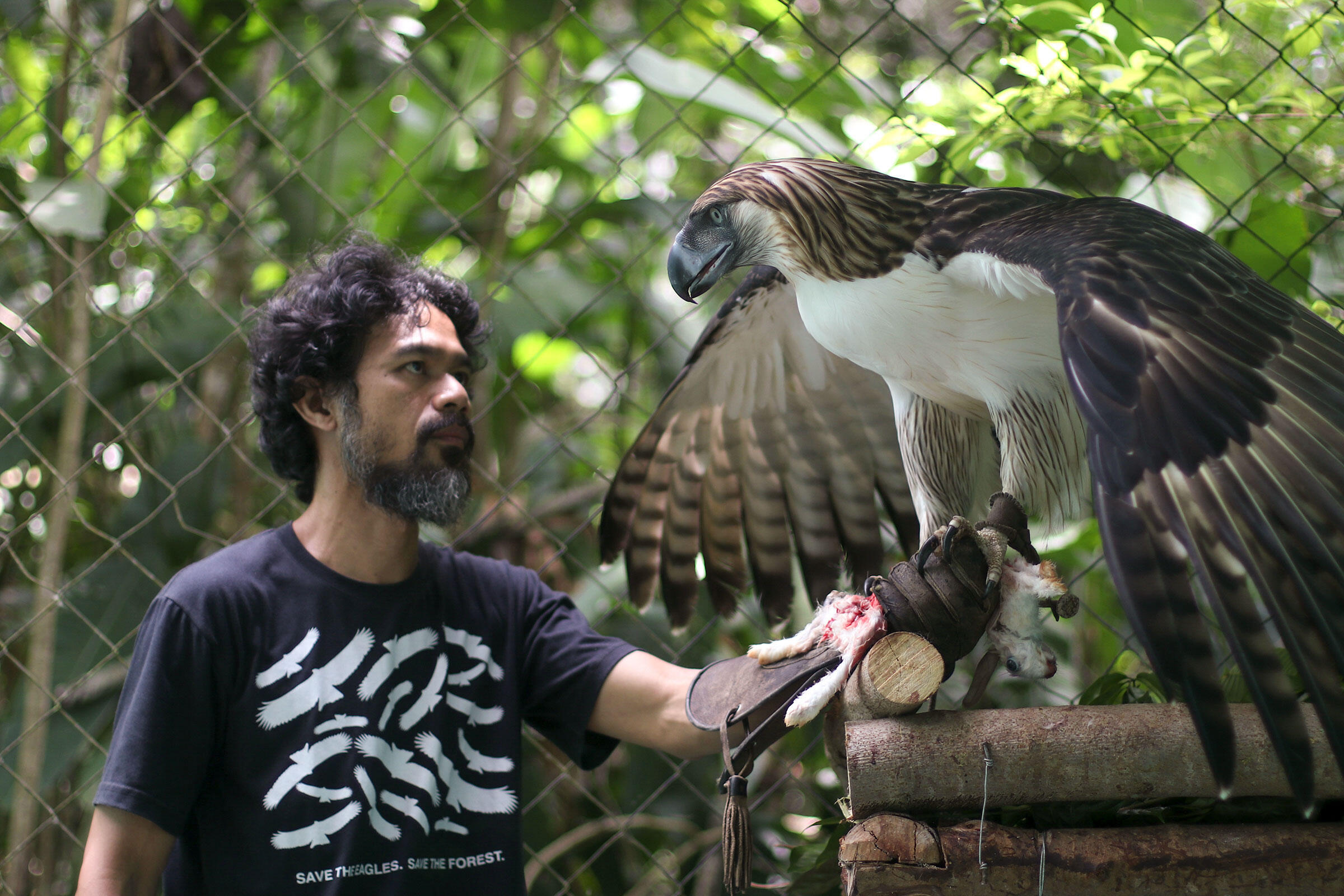 When keeper Dominic Tadena approaches his ward Imbulog's cage, he does so with slow steps and tranquility. The gray-eyed eagle observes him calmly before taking off and sinking into the man's leather glove. Imbulog is one of dozens of permanent, critically endangered residents (both captive-bred and rescued) at the Philippine Eagle Center in Davao City. Photo: Ugo di Mauro

“They’re not supposed to be caged. I hate to see them locked up,” says Eddie Juntilla, as he leads us through a small gate marked Authorized Personnel Only. “But it’s either this or them dying in the wild.”

The “cage” Juntilla is referring to is a 20-acre jungle on the fringe of Davao City, built solely for the world’s largest—and perhaps rarest—bird of prey. A patchwork of rainforest and mid-montane greens, it forms the heart of the Philippine Eagle Center, the last standing sanctuary for an imperiled raptor and those dedicated to its survival.

With its near-seven-foot wingspan, hazel panache, and inquisitive stare, the Philippine Eagle needs little introduction. For centuries it thrived in its endemic island range, ruling over the tropical food chain as a shrewd, tactical hunter. (The bird is also known as the monkey-eating eagle, based on its culinary preferences in the canopy.) But mining, logging, and poaching for meat have decimated the population over the years. At last count, there were an estimated 400 pairs left in the wild, squeezed into a breeding territory the size of Anaheim, California. In 2010, BirdLife International and the International Union for Conservation of Nature listed the species as critically endangered, banning the global export, slaughter, and sale of live or dead eagles.

The bird’s special status has done it little good at home, however. The Philippine government is largely hands-off when it comes to protecting the eagles and their habitat; hunting is illegal but is hardly investigated, and deforestation continues unchecked. So instead, the fate of the species falls to the Philippine Eagle Foundation and center.

Founded in 1969 under a different name, the goal of the Philippine Eagle Foundation was simple at first: study the raptor’s territory needs and reproduction habits, map its decline, and come up with solutions to shield it from guns and chainsaws. Their initial report showed that the species was an extremely slow breeder. Each pair of eagles spent two years rearing a single-egg clutch. Once the offspring was independent, it took another six to seven years for it to mate and bear chicks of its own.

With that knowledge in mind, the foundation shifted its priority to multiplying the bird’s numbers indoors—and that’s how the Philippine Eagle Center was born. An initial round of funding from the government led to construction of the sanctuary in Davao City, where rural residents would have a chance to learn about and interact with the iconic banog, the Filipino term for bird of prey. From there, the center only grew: Donations poured in from around the world, and two wild-caught eagles soon became 28 strong. 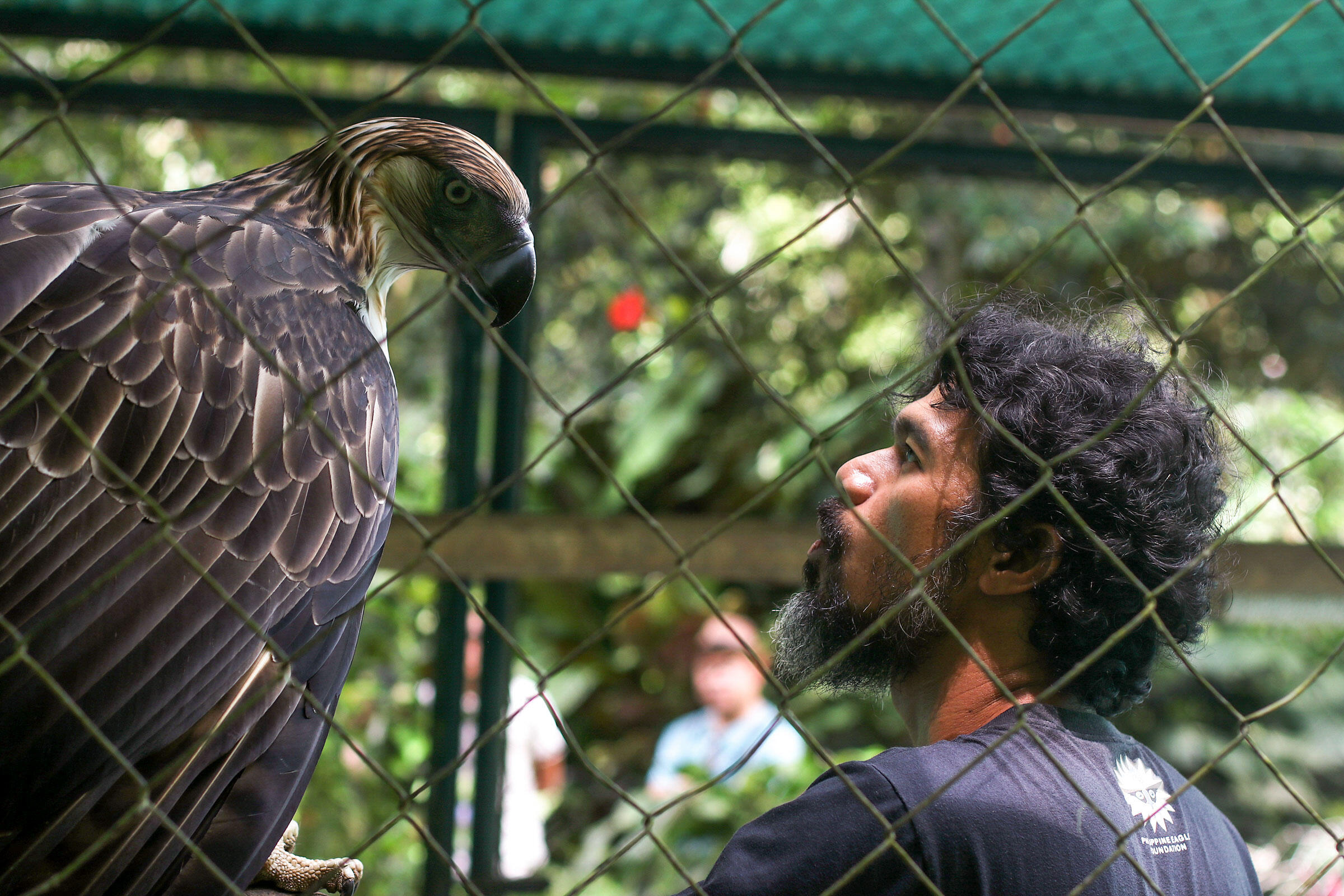 Tadena's whistle is like a secret language between man and bird. He makes regular vocalizations to keep the eagle on his arm calm and entranced during the encounter. Photo: Ugo di Mauro

For Juntilla, a senior animal keeper and 30-year veteran of the center, the efforts have come with a few sacrifices. During the debut year of captive breeding, he and the rest of the staff gave up their wages to help make ends meet. The mission continued, and in 1992, the team used artificial insemination to hatch a duo of chicks, which they subsequently named Pagkakaisa (meaning unity) and Pag-Asa (meaning hope). The science, which took 14 years to perfect, is one of the most critical conservation tools for the center today.

Aside from the now 26-year-old Pag-Asa, Juntilla has six other Philippine Eagles imprinted on him and an additional five more under his watch. For most people, that may sound like a lot of responsibility—but as the robust 51-year-old puts it, “if it’s your passion, you never get tired of doing it.” He and his peers also rescue wild individuals; between 1984 and 2015, they took in six Philippine Eagles wounded by bullets. Once admitted, the birds became permanent residents at the center.

While the team has tried to reintroduce eagles in the past, it stopped doing so due to grim results. Five of the 10 freed individuals have either been trapped or shot. In March 2008, for example, a farmer confessed to killing, cooking, and eating Kagsabua, a bird that was treated at the center in 2006. Kagsabua was released with a tracking device on the other side of the mainland in Bukidnon. The corpse was eventually traced to the culprit, who received a six-year prison sentence and a 100,000-peso fine (roughly $2,000).

So, the center continues to be the only safe haven for the birds. But by growing the captive population, it at least gets to educate the curious public about conflicts they can help abate. Though the majority of the eagles are kept out of view (to protect them from lurking dangers like avian malaria), visitors are welcome to wander the exhibits, meet with the keepers, and even go birding in the curated habitat.

At the same time, the plight of the Philippine Eagle is gaining global recognition with two new films—Birdshot by Filipino filmmaker Mikhail Red and Bird of Prey from the Cornell Lab of Ornithology and renowned cinematographer Neil Rettig—offering deep, dual perspectives on the human-raptor relationship. More eyes also means more support for the Philippine Eagle Foundation, which has held on without government funding since the late 1980s.

Back in Davao City, a festival rages outside of the center walls. Every August the locals celebrate Kadayawan, a harvest gala packed with color and cultural wealth. The Philippine Eagle always makes an appearance during that time—by way of costumes, floats, and other fantastical depictions. The homage merely lasts a week, but it's another way to preserve the raptor’s legacy and keep a lineage that started with hope and unity alive.

Lauren McGough became a falconer as a teenager. Now her compassionate training with Miles, a troubled Golden Eagle, has given him a new life.