Mississippians: Urge your members of Congress to reject the Yazoo Pumps. 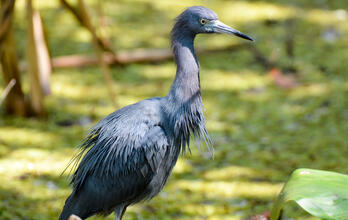 From its northwoods headwaters to its sultry lower reaches, the swollen Mississippi River has had a record-breaking spring. St. Paul, Minnesota, was flooded for 42 straight days, blowing past a previous record 33-day stretch. In Rock Island, Illinois, the river rose higher than during the devastating floods of 1993. And to relieve pressure on the levees around New Orleans, the U.S. Army Corps of Engineers for the first time opened the Bonnet Carré Spillway twice in one year.

In the flood-prone southern Mississippi Delta, the rising river and punishing spring rains are now stirring up talk about a controversial engineering project that opponents thought they’d sunk more than a decade ago. In 2008, under President George W. Bush, the U.S. Environmental Protection Agency used its Clean Water Act authority to veto the Yazoo Backwater Area Pumps Project, citing major harm to wetlands and wildlife. But now, public outcry and political pressure from the Delta has put the proposal back on the table.

The Yazoo backwater area is a sparsely populated, 926,000-acre arrowhead aimed south, with its point just north of Vicksburg, Mississippi. The flat, low-lying area contains around 278,000 acres of wetlands, most of them bottomland hardwood forest—wildlife-rich swamps that once dominated the lower Mississippi floodplain but have been largely wiped out by agriculture and development. The backwater historically provided natural storage for regular flooding from the Mississippi and Yazoo Rivers, which converge at Vicksburg. But a complex system of levees completed around the backwater in 1978 walled it off from the rivers, allowing land-clearing for agricultural development while forming a kind of bathtub. Now most of the area's water comes from rainfall that drains out into the Yazoo.

When the Mississippi River is at flood stage, though, the surge of water acts as a wall at the confluence with the Yazoo. The smaller river, unable to drain into the larger, begins backing up into the backwater area. When that happens, the Army Corps closes the Steele Bayou floodgate, a component of the levee system about 10 miles north of Vicksburg. That plugs the bathtub drain, keeping the river water out. The problem is, it also keeps rainfall in. Water builds up in the Yazoo tributaries that flow through the backwater with nowhere to go. When there are heavy rains while the gate is closed, as happened this year, the bathtub fills up and floods the farms that are the region's economic backbone.

The proposed pumping facility—authorized by Congress in 1941 alongside other Army Corps flood-control infrastructure that has since been built—aims to address that problem by forcing 6 million gallons of water per minute out of the backwater and into the downstream Yazoo River when the gate is closed. That would bring relief to the farmers within, but in huge swaths of the area, pumping the water out would prevent the periodic inundation that creates and sustains important wetland habitat.

When it torpedoed the plan, citing a Corps assessment that it would harm at least 67,000 acres of wetlands, the EPA determined that the pumps would have “unacceptable adverse effects on fishery areas and wildlife.” A separate EPA analysis found that they would in fact damage more than 200,000 acres of wetlands, an area roughly equal to the sum of New York City’s five boroughs. In 2007, John Meagher, a 24-year veteran of the EPA and retired director of its wetlands division, wrote in the New York Times, “I never reviewed a proposal that would do more damage to the environment than the Yazoo Pumps project in the Mississippi Delta.”

Opponents—including conservation groups, scientists, conservative taxpayer advocates, and 90 percent of Mississippians who provided public comments on the project—paint the $220 million project as pork-barrel spending that would primarily help a relatively small number of big farms get bigger by expanding their operations into newly drained areas. Plus, all the water that gets pumped out will have to go somewhere, and they worry that downstream communities could suffer as a result.

But Delta residents and elected officials say frequent flooding is a crisis for the region, and argue that the pumps are needed more than ever to protect their property and economy. In response to heavy rains, the Corps shut the Steele Bayou gate from February 15 until April 1, during which backwater flooding reached its highest level since 1979, with around a half-million acres underwater. More rain and another round of floodwater coursing down the Mississippi—expected to crest near Vicksburg around May 20—forced them to shut it again on May 11.

“Today’s flooding in Mississippi should not be happening,” said U.S. Sen. Cindy Hyde-Smith on May 9, pushing for the pumps in her first speech on the Senate floor after being elected to represent the state last November. “It’s time for the federal government to step up and make good on its promises.”

Pressed by Hyde-Smith at a Senate subcommittee hearing in April, EPA Administrator Andrew Wheeler confirmed that he is reconsidering the 2008 decision, raising the possibility of what could be the first-ever reversal of a veto by the agency.

The wetland area at risk is more than eight times larger than the combined acreage affected by all 12 other projects the agency has vetoed, says Melissa Samet, senior water resources counsel for the National Wildlife Federation. “When you put the impacts in perspective, they’re monumental,” she says. “Massive. Beyond the pale.”

The wetlands at risk are of profound significance for bird conservation.

Even if the pumps were installed, some flooding would remain a fact of life in the backwater. Instead of siphoning off wetlands, conservationists say communities should protect and restore them to act as a sponge-like flood-control tool, while also embracing relatively low-cost options like elevating roads and buildings. As levees and other structures have walled off and hemmed in the Mississippi, it’s made flooding more severe. At the same time, downpours are becoming more intense as climate change worsens. To be resilient in the face of these forces, communities should invest in natural infrastructure to give the river some space and soften the blow, says Jill Mastrototaro, policy director for Audubon Mississippi. “We’re really trying to lift up the other more logical, common sense, cost-effective options that are on the table for these communities that have been facing concerns about flooding,” she says.

The wetlands at risk, Mastrototaro notes, are of profound significance for bird conservation. They sit in the heart of the Mississippi Flyway, and some 60 percent of all U.S. bird species migrate through the lower river’s historical floodplain, including 40 percent of the country’s waterfowl population and up to 1 million shorebirds, according to the EPA. The Yazoo backwater is home to a national forest and four national wildlife refuges, two of which are designated Important Bird Areas: Panther Swamp, which supports large breeding populations of Prothonotary Warblers and Red-headed Woodpeckers and is frequented by non-breeding Wood Storks, and Yazoo, where Wood Ducks nest and another 100,000 ducks spend the winter.

Draining the area’s wetlands would wipe out a key refueling site during migration, when birds need every calorie they can get, making the journey fatally taxing for more of them, the EPA reported. And birds that breed in the backwater would have to spend more time traveling farther to find food for their young, likely leading to more young birds dying.

For many Yazoo backwater farmers, however, the more pressing concern is that their fields are underwater. More than 5,000 residents signed a recent petition to advance the pumps, and elected officials—Republican and Democrat—have lined up in support. At a recent meeting of the Mississippi River Commission in Rosedale, all the testimony was in favor of the project, says Charles Grayson, director of the Bigger Pie Forum, a nonprofit group that promotes fiscally conservative economic development in Mississippi. Grayson says he’s not convinced the pumps are the right solution—but a solution is needed.

“Now that the Delta is upset about the flooding, the governor is upset. Every politician is upset,” Grayson says. “For the lower Delta, this is everything at the moment.”