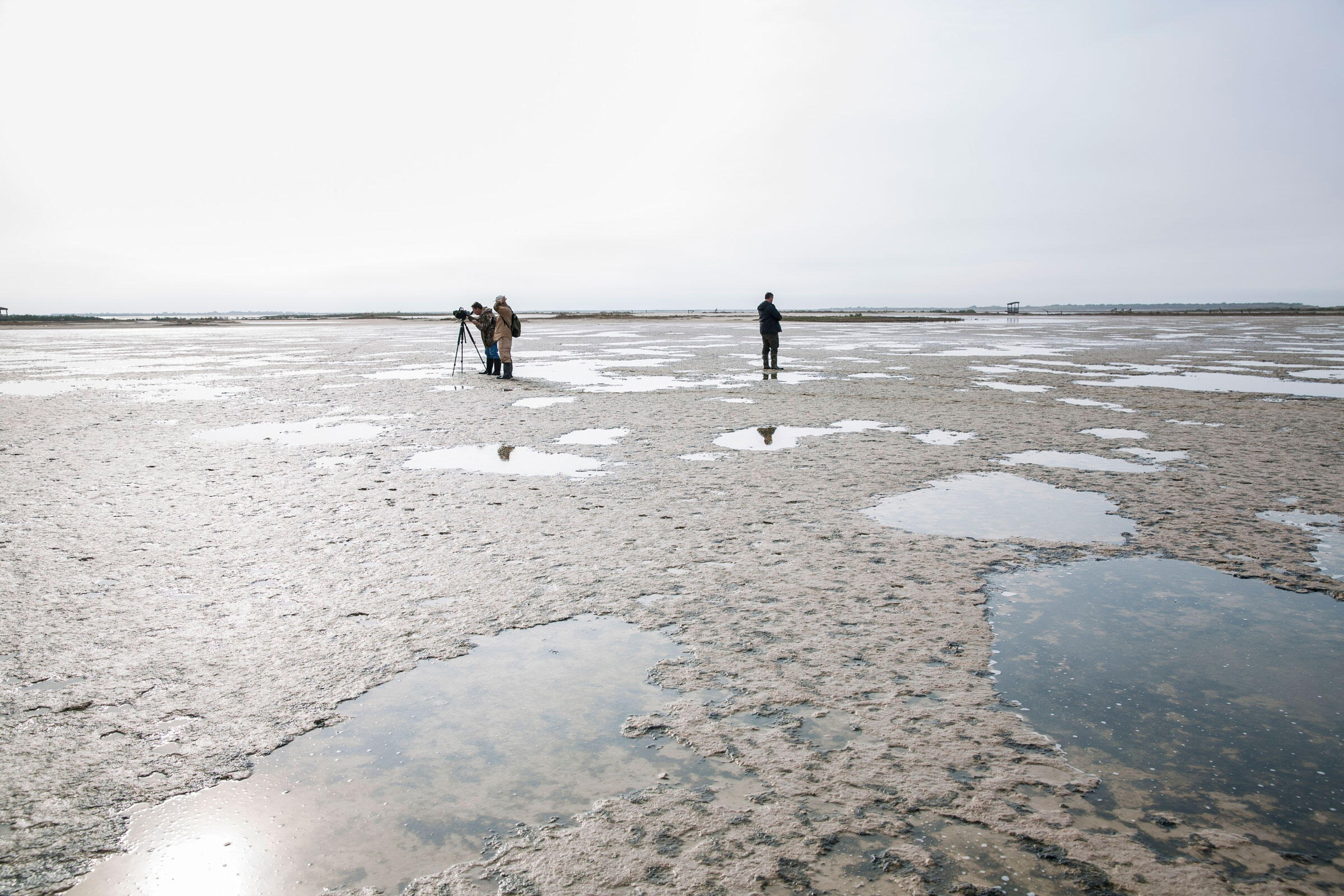 From left, Beau Hardegree, Mikael Behrens, and Mark Pulich search mudflats at the Nature Preserve in Port Aransas, Texas, during the Christmas Bird Count on Dec. 18, 2017. The group counted 70 species at the preserve. Photo: Angela Piazza

Beau Hardegree and the birds he counted around Port Aransas, Texas, late last month had something in common: They both survived Hurricane Harvey.

In August, the first major hurricane to hit this part of the Texas coast in nearly half a century flooded Hardegree’s home with a foot of water. He’s lived with his wife and two children in a camper parked in his driveway ever since. “We're a lot better off than a lot of people in this town,” he says. “If you drive around, there's a lot who don't have anything.”

Despite the upheaval in their own lives, Hardegree and dozens of others in Port Aransas set out on December 18 to take part in Audubon's Christmas Bird Count, the 118-year-old community science project in which volunteers across the Western Hemisphere fan out to record the types and numbers of birds they spot. The Port Aransas count is just one of more than two dozen CBCs along the Texas coast alone. Over time, these annual snapshots have generated a greater understanding of how birds are faring today and how climate change might affect their habitat in the future.

The participants knew that, in addition to damaging human-built structures, Harvey had swamped the homes of the area’s avian residents. The category 4 hurricane smothered willow trees at the Joan and Scott Holt Paradise Pond that provide food and shelter for warblers, American Robins, and other songbirds. It cut through a bulkhead separating the Corpus Christi Ship Channel from the Port Aransas Nature Preserve, eroding habitat that supports a bevy of birds, including Least Bitterns, Roseate Spoonbills, and Green-winged Teals. And the storm surge, followed by dozens of inches of rainwater, inundated the salt marshes where Seaside Sparrows roost in clusters of short, shrubby black mangroves that have expanded into the salt marsh. The results of the Port Aransas count, now in its 40th year, would be an important indicator of how severely the birds have been affected.

Before dawn on the day of the count, the participants set out in small groups to survey their designated areas within the Port Aransas count circle, which included parts of Aransas Pass, Ingleside, Red Fish Bay, and San Jose Island, all of which fell in Harvey’s destructive path. Despite the obvious fact that Harvey had personally affected many count participants, most people prefer to focus solely on the birds. When asked how the hurricane had affected him, Warren Pulich, who founded the Port Aransas CBC in 1977, six years after Hurricane Celia pummeled the island, demurs. “I don’t think we have enough time to talk about this," he says.

Spotting Seaside Sparrows is typically a given for Joan and Scott Holt, who organize the count. Not this year. They search the familiar places, the backside of Mustang and Harbor islands, to no avail. “Finally in Little Slough on Harbor Island, one jumped up to the top of a mangrove when we played its call,” Joan says. “[That’s] very good news and hope for the future of this iconic species.”

Just as the landscape has been in flux since the storm, so too was the makeup of the crowd on the count. There were a few new faces, but most people who showed up have been taking part for years—though some old hands didn’t make it. “There’s a lady I know whose house was bulldozed yesterday, so I’m not sure she’s up for this today,” says Hank Arnold, who oversaw the group counting at the Leonabelle Turnbell Birding Center. Usually they count birds from the extensive boardwalk on the property, but that wasn’t an option this year: Harvey tore out the structure. So Arnold brought along his drone to aid in the count. “I would have come out anyway, but it’s important this year because of what happened,” he says.

Colleen Simpson, the nature preserve manager, and Joan Holt, who also serves as a city council member, are applying for grants and seeking donations to rebuild the boardwalk on the preserve, which nearly 60,000 people visited last year. “What you saw today at the birding center, it just almost makes you cry,” Holt says.

A Great Egret and Snowy Egret perch (left) on the remnants of the boardwalk at the Leonabelle Turnbell Birding Center, which was destroyed by Hurricane Harvey. From left: Leslie Hoekstra, Lee Christie, and Tom Keffer count birds at the center. Photo: Angela Piazza

Port Aransas resident Ray Dillahunty didn’t consider sitting out the count, despite recent hip surgery. He convinced a local business to lend him a golf cart, and he and Denise Dailey use the borrowed vehicle to traverse the beach facing the Gulf of Mexico. They both smile when they tally 29 Red Knots, which have been declining for decades, foraging on a beach.

At another point in the day, Dailey slips on a jetty while counting Laughing Gulls overhead, bloodying her nose and mouth. She simply wipes her mouth with a tissue and keeps going. “When I saw the hurricane had hit my favorite place in the world—and I’m sorry I’m getting so emotional,” she says, pausing to take a breath. “I thought I had to do something. I had to do some small thing. I couldn’t put a roof on anybody’s house, but you know, I was worried about the birds, and I was worried about the people,” she says.

The desire to help—and a love of birds—also spurred Lee Christie and her husband to take part the Port Aransas CBC for the first time. The couple lives in Hood River, Oregon, but they were volunteering at Padre Island National Seashore for a few weeks around the holidays. When they learned of the Port Aransas count, they drove down on their day off. “What’s really important is the habitat is [still] here,” Christie says.

At the end of the day, all 33 participants gathered at Holt’s home to calculate the totals from the group effort. Over plates of tamales they shared stories and pictures. In all they’d spotted 147 species of birds, the lowest number in 20 years. Last year they recorded 154 avian species. 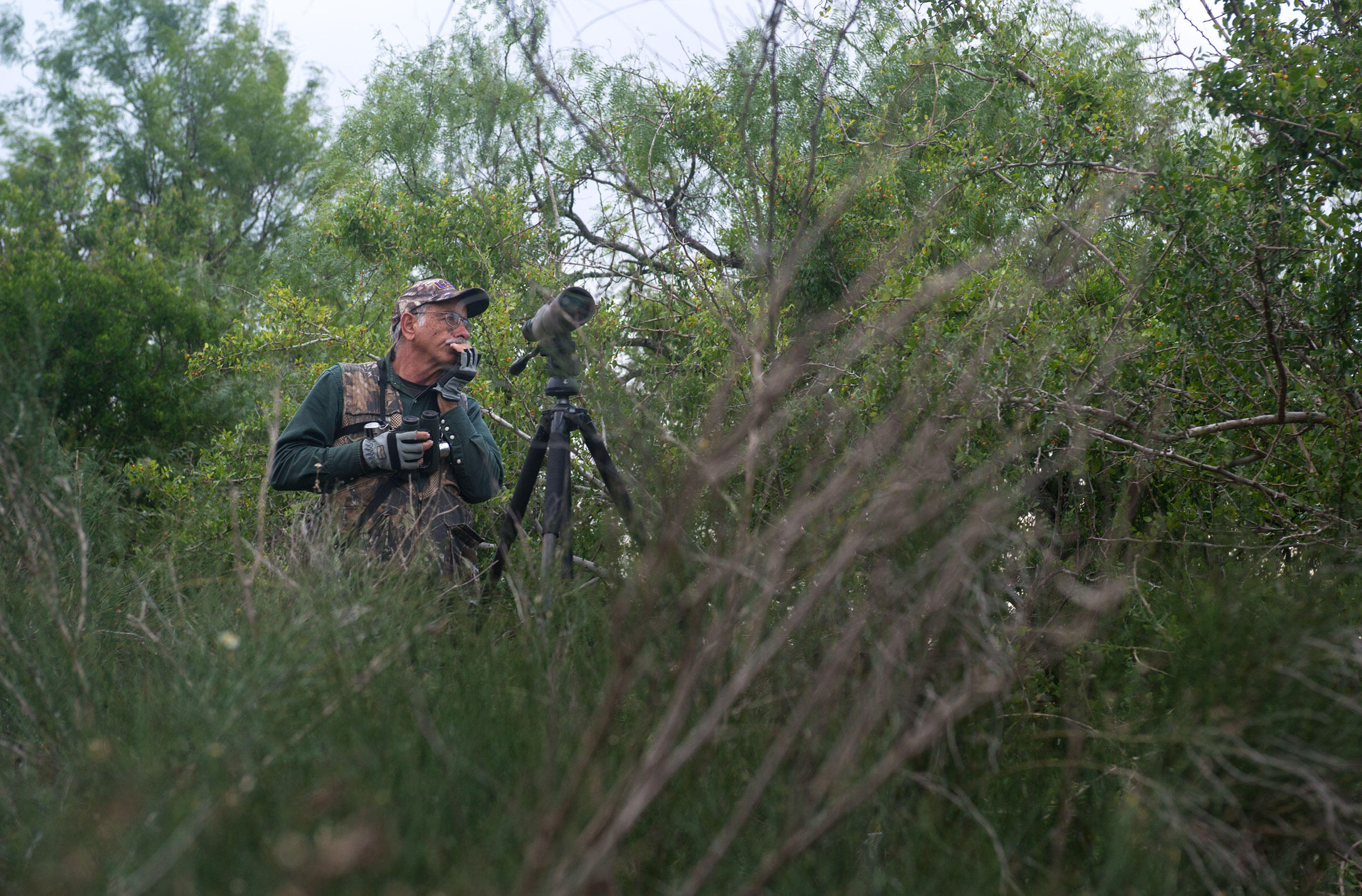 Other counts along the coast also saw their numbers dip this year, says Brent Ortego, a retired Texas Parks and Wildlife Department biologist who participated in 12 Christmas Bird Counts in two weeks. “My last one was yesterday, the Brazoria Count,” he says on New Year’s Eve. The Mad Island Marsh Preserve’s CBC, for instance, which is farther from Harvey’s reach at more than 100 miles northeast of Port Aransas, recorded 219 species, below the average of 230.

At the Holt house, the group doesn't dwell for long on the species they didn’t see this year, including the Horned Lark and Spragues Pipit, which typically reside in the grassy hummocks surrounded by dry sand on the preserve that Harvey dowsed with salt water. Instead they focus on the Red Knots and other birds that seemed to have fared well during the storm—or at least survived it. And the festive mood turns exultant when they learn of another survivor—some said the ultimate survivor—that was spotted in the count’s territory for the first time: Whooping Crane. The pair of the magnificent cranes, which Scott Holt caught sight of foraging on San Jose Island, are two of only about 430 of the birds that exist in the wild. He was beyond thrilled: “I’ve been looking forward to that for decades."

You Can Help. Provide birds with the food and shelter they need by planting native plants. Use our handy native plants database to get started. 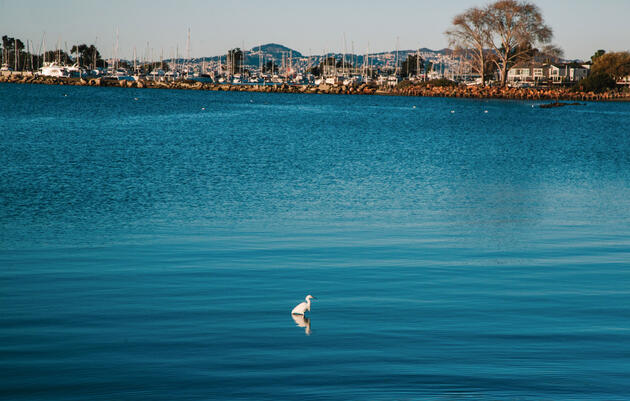 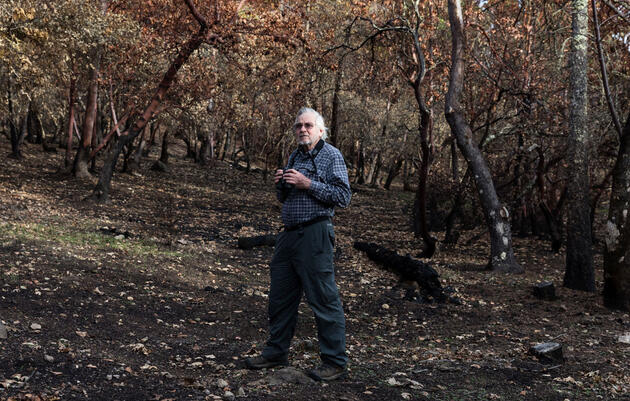 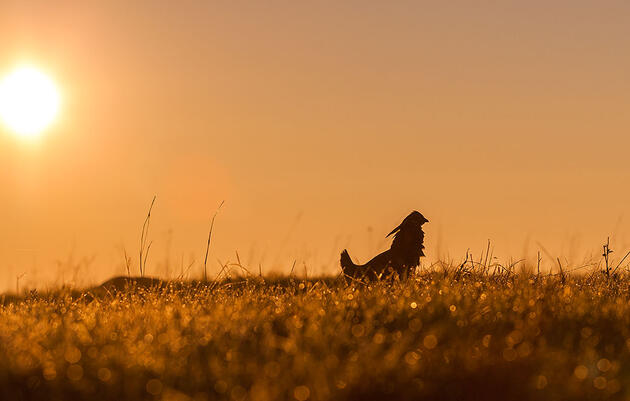