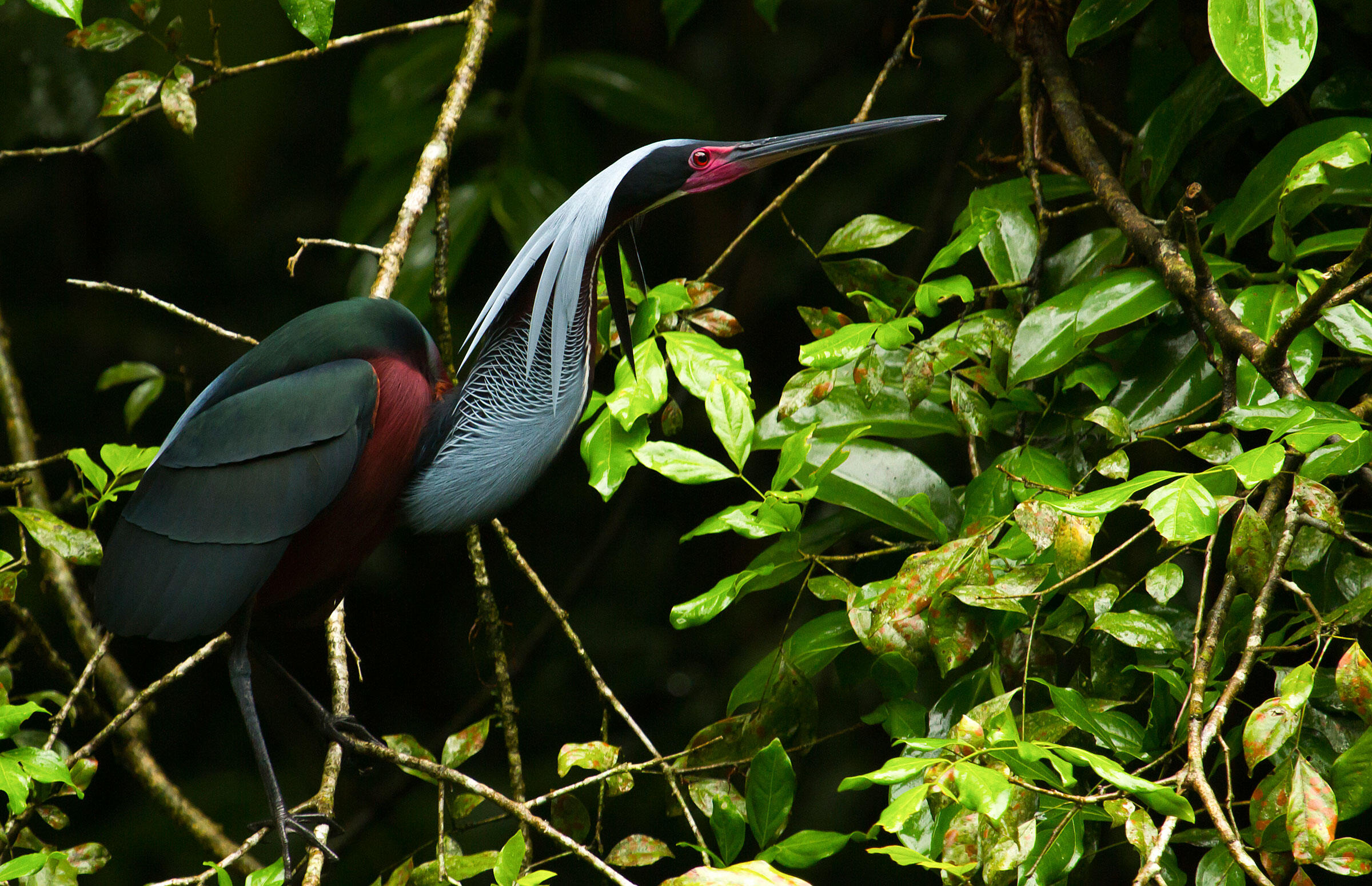 The Agami Heron is a superb-looking bird, in part due to its swanky mating ensemble—a feathery white comb over, ombre neck plumes, and a hot-crimson facemask. But the species favors the steamy overgrowth of Central and South America and is notoriously hard to find (no one even knows where this mysterious bird spends its winters). As a result, very few people have seen its extraordinary habits or photographed it in the wild—until now.

It all started when heron biologist Jim Kushlan and wildlife photographer Kirsten Hines heard about a rare colony of Agamis at the Pacuare Reserve in Costa Rica, back in 2011. After a series of conversations with the reserve's manager and caretaker, Kushlan and Hines were finally able to secure permission to visit at the height of breeding season last May. What resulted from their trek—thanks to Hines’s photography skills—is the first full documentation of this elusive species' breeding behavior.

After arriving at the private eco-reserve by boat, Kushlan and Hines immediately launched into an eight-day heron study. With the help of long-time caretaker Danilo Herrera and his sturdy old canoe, the duo counted 266 Agami Heron nests plus two chicks—all holed up on a tiny island in the Pacuare lagoon. They were lucky to find the birds at all. Three years ago, an impish spider monkey used a fallen tree to cross over to the nesting grounds. Once there the animal destroyed multiple nests, causing the entire colony to flee and relocate for the season. But spider monkeys are now exiled from the island—Herrera makes sure to cut up any makeshift bridges he notices during his patrols—and the birds are back and thriving.

Though Agamis are easily disturbed, the Pacuare birds are used to Herrera’s presence and therefore, are more forgiving to humans. During their stay, Kushlan and Hines even led a group of local high school students to the bird blind to watch the herons. The teens were captivated by the glamorous birds, Hines says, but were also very respectful of their shy ways.

The trip marked the second time Kushlan had encountered the species (the first time was by flashlight in the dead of the night in Ecuador), but it was Hines’s first, and the birds made quite an impression. “The Agami Herons were stunning, more brilliant than any of the images I’d seen,” she wrote on her website. “This was a special opportunity, and that was exactly why we were here.”

As soon as Hines spotted the heron's headdress (which she likens to a punk rocker's wig and Einstein's hair), she started snapping away from behind a bird blind. Her timing was impeccable; at one point, a young female and male faced off in a fascinating courtship act, while on the other end of the blind, a chick called out to its father for food.

Unlike most birds, both sexes of Agamis boast the same fancy plumage around mating season. The only way to tell them apart, Kushlan says, is by the male’s larger beak and body. And unlike many other species, it’s the female that has to win the male’s heart. Courtship starts when a male chooses a nesting site and starts displaying around it. This catches the eye of a female—and if she’s interested, she’ll come over and start dancing: shaking her plumes, rocking on her legs, turning bright red in the face, and bowing from time to time. The males then counter—and they can get aggressive, snapping and even stabbing the females with their razor-sharp beaks to try and rebuff them. “It’s very hard on the female,” Kushlan says. The process may go on for days, until the male finally accepts the partner and they start building a nest.

The herons' courtship has never been described in such detail before. And thanks to Kushlan’s expert eye and Hines’s elaborate photos, the findings will be published in the journal Waterbirds in early June. The paper, which complements ongoing research on an even larger Agami colony in French Guiana, imparts new information on the birds' nesting, feeding, and parenting habits, and how they react to disturbances around them. It also points out the discrepancies between the breeding males and females; for example, the female will hold the red in her lores for hours, unlike the male.

Kushlan and Hines hope that their work will draw more scientists to Costa Rica for long-term monitoring; every new detail can help strengthen the IUCN's conservation plan around the Agamis. Through their experience they realized that well-managed, privately owned land can be valuable to both local inhabitants and migratory animals. “Private endeavors like this can have a continent-wide effect on a species,” Kushlan says. He and Hines urge birders to visit the reserve and see its special tenants firsthand (Hines gives the place a glowing review on her online travelogue).

As for the intrepid husband and wife, they’re now back in their home state of Florida, preparing to scout out another wily waterbird: the Zigzag Heron, a little-known species which nests in the Amazon, right alongside its regal Agami cousin. 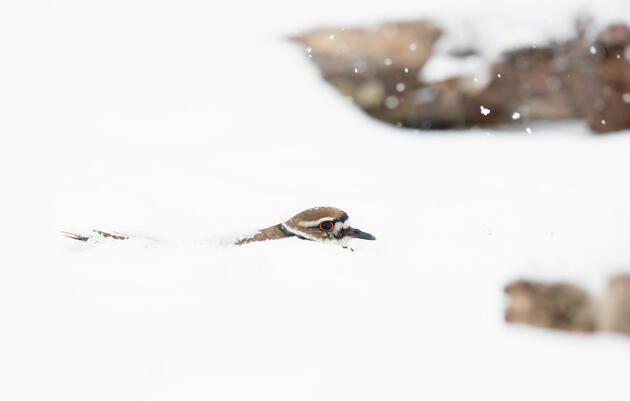 By protecting the Killdeer's nest from harm, Melissa Groo was able to capture one parent's impressive devotion to its eggs. 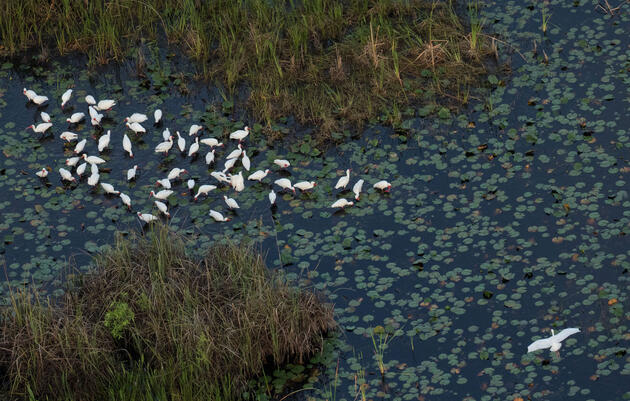 Thanks to optimal conditions, wading birds are breeding in huge numbers throughout the Everglades this year 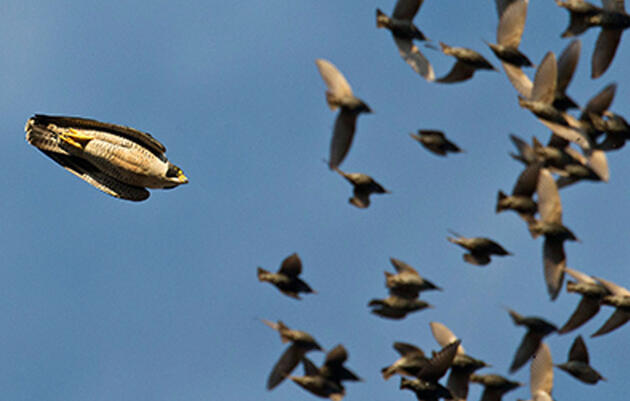 Starlings are easy to find. But capturing their twisted formations as they evade predators takes commitment and vision.