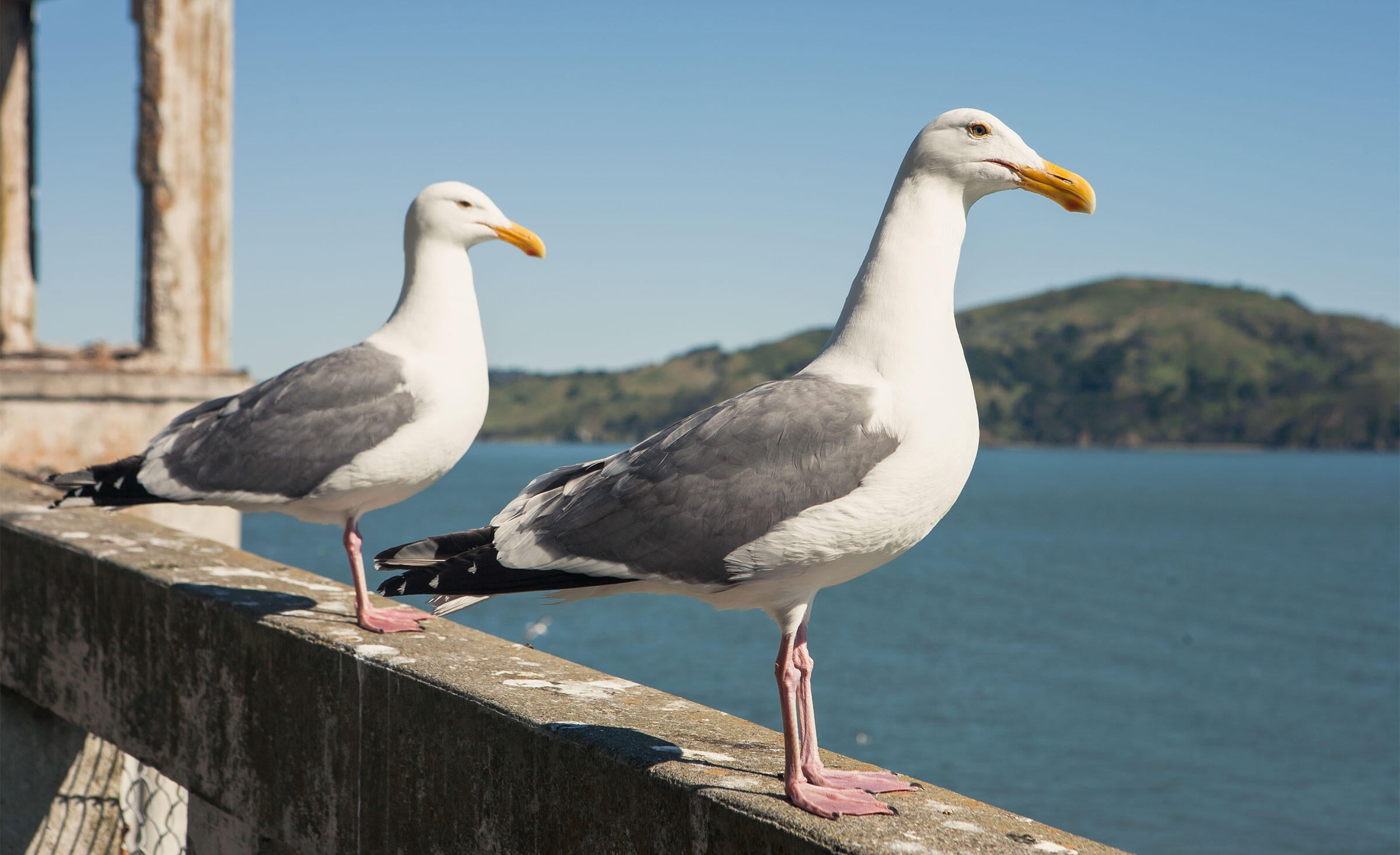 Alcatraz Is Being Overrun by Seabirds, But Who’s Complaining?

After docking on Alcatraz Island in California, many visitors head straight for America’s most notorious prison. But as they zigzag up the hill—thinking of such legendary inmates as Al “Scarface” Capone and George “Machine Gun” Kelly—they can’t miss the Western Gulls perched on just about every structure.

The gulls aren’t just props to the isle’s eerie atmosphere; they’re part of a thriving, 22-acre ecosystem that houses multiple bird colonies. Near the dock, those who glance up might notice Great Blue Herons nesting on Alcatraz’s largest eucalyptus tree. A brief stroll to The Rock’s west (and exceedingly windy) side, reveals one of the Bay Area’s largest flocks of Brandt’s Cormorant, framed by the iconic Golden Gate Bridge. And in nearby shrubs, Snowy Egrets and Black-crowned Night-Herons roost right alongside the foot traffic.

In late spring and early summer, when chicks and juveniles of various species are strewn out across the landscape, Alcatraz really heats up as a birding destination. Scope-toting docents are usually on hand to help curious visitors observe the buffet of breeders. The National Park Service (NPS), which manages the island, also leads occasional guided tours of the avian life. (These walks generally aren’t advertised in advance, so birders must luck into them on the day they visit.) Even for sightseers who can’t tell a pelican from a starling, a tour of Alcatraz can become an avian-inspired affair.

Birding the Rock doesn’t come cheap: A ferry ticket costs $38. But the perks include a cellhouse audio tour and more than 5,000 nesting waterbirds of nine different species. “I wish more birders would come out and experience this place,” says Tori Seher, the NPS biologist for Alcatraz. She points out that it’s the best location in the Bay Area for viewing colonies up close. “I think the locals maybe think it’s a tourist trap . . . but it’s amazing out here,” she says. The Marin Audubon Society seems to agree with that; the chapter organizes an Alcatraz trip for its members at the height of the breeding season each June.

Historically, the island was a seabird haven before armed guards ever took over. Explorers arriving in San Francisco Bay in 1775 described it as a guano-encrusted rock and named it “La Isla de los Alcatraces” (Spanish for “The Island of the Pelicans” or “The Island of the Gannets”). It’s unknown exactly which species lived there, and by the time Alcatraz became a fortress in the 1850s, the birds had all purportedly been driven away. The Rock was later used as a military prison, and then, from 1934 to 1963, as a maximum-security federal penitentiary from which escape was all but impossible. During those years, “there were no reports of birds nesting on the island,” Seher says.

In 1972, following a 19-month occupation of Alcatraz by Native Americans, the island was transferred to NPS. The birds began to come back around that time, ironically aided by the tide pools and steep cliffs that were dynamited by construction workers.

Western Gulls were the first to show up on the felon-free island, followed by Black-crowned Night-Herons and Pigeon Guillemots. Then, in 1992, the Brandt’s Cormorants reappeared. Originally numbering just a few individuals, the population has since boomed to a record 1,862 pairs in 2018, likely aided by a surge in marine prey.

This summer, in addition to the cormorants and ubiquitous Western Gulls, conservationists counted 42 Pigeon Guillemot pairs and about 100 pairs each of Black-crowned Night-Herons and Snowy Egrets during their annual survey, plus a smattering of Great Blue Herons, Black Oystercatchers, California Gulls, and Canada Geese. There are also Song Sparrows, Anna’s Hummingbirds, and Common Ravens that nest on the island, while Brown Pelicans fly overhead. There’s a plethora of non-avian wildlife, too, from harbor seals to banana slugs.

Fall and winter birding on Alcatraz brings its own pleasures, Seher says. Grebes and diving ducks frolic offshore, flocks of sparrows and warblers flit after food, a resident Peregrine Falcon patrols the skies, and a mysterious Burrowing Owl hides out in the prison sewer pipes.

Look closely, and one of these birds might just reveal something fascinating. Take it from Heather Robinson, a scientist at the Farallon Institute, who’s been monitoring the Western Gulls and Brandt’s Cormorants of Alcatraz for six straight breeding seasons. She particularly admires the juvenile cormorants, which jam their heads down their parents’ throats for food and form groups that play together and cuddle for warmth. “It’s like a little gang of teenagers,” Robinson says. (In fact, she’s so smitten with Brandt’s Cormorants, she has a forearm tattoo of one chasing a school of anchovies.)

But the return of Alcatraz’s birds could cue more tense encounters with tourists. The Rock is now among San Francisco’s top tourist attractions with more than 1.5 million visitors annually, and sometimes these crowds come into conflict with the wildlife. Earlier this year, for example, Robinson witnessed a visitor hop a fence and run through the Brandt’s Cormorant colony, causing some pairs to lose their eggs. Other threats include helicopters, kayaks, drones, and fishing boats that approach the colony too closely.

Robinson suspects these disturbances may have been too much for the island’s few Pelagic Cormorants, which haven’t bred on Alcatraz for the past four years. Even so, long-term monitoring shows that, overall, the jailbirds of Alcatraz are thriving—all the more reason for birders to come enjoy the unique spectacle. “You get to see these cute, little, fuzzy chicks running around everywhere,” Seher says. “How can you not enjoy that?”