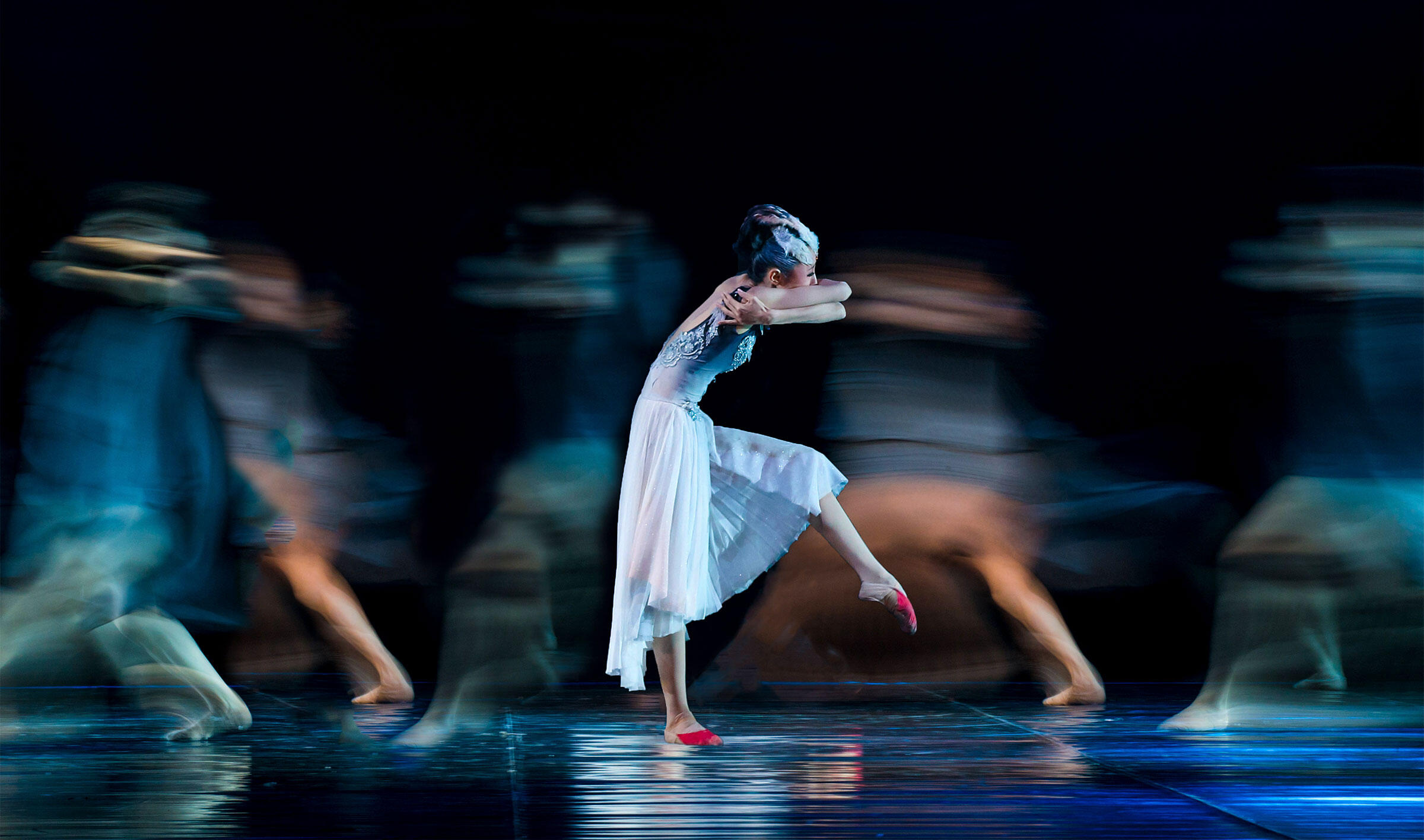 The endangered Crested Ibis, as played by Zhu Jiejing in the ballet Soaring Wings. Photo: Courtesy of the Shanghai Dance Theatre

It starts with a single white feather floating down from the rafters. As the spotlight holds, six dancers stream onto the stage and pose in gem-encrusted headpieces, red-tipped slippers, and ivory suits. They are the Crested Ibises, and they have a tale to tell.

From the first scene on, it’s clear that Soaring Wings isn’t your conventional ballet. Even in the hallowed halls of Lincoln Center, it covered new artistic ground by drawing focus to wildlife extinction.

Set in 20-century China and performed by the Shanghai Dance Theater since 2014, the show made a limited run in New York City and Boston earlier this month. It mirrors the real-life plight of the Crested Ibis, a stately bird that once numbered in the tens of thousands and inhabited much of East Asia and Russia. But by the 1970s, plume hunting, pollution, and dredging of wetlands had completely wiped out the species—save for seven individuals in the Qinling foothills of China. Today, thanks to GPS tracking, pesticide bans, and tight nest surveillance, that tiny stronghold has swelled to nearly 2,000 birds.

For Tong Ruirui, director of the Shanghai Dance Theater and choreographer of Soaring Wings, the ibis offered a unique opportunity to use ballet to champion environmental change. “We need to do a lot to help the preservation of the Crested Ibis, [yet] the most important is to strengthen the awareness of protection,” she says. Rather then reenacting historical events, however, she opted for an adaptation that also imagines the bird’s perspective. “This is the first production I have choreographed that focuses on the relationship between human beings and nature,” Ruirui says. “We are more accustomed to view nature from the human side, but perhaps sometimes we may as well try to view ourselves from the other creatures’ sides.”

To bring the species' wild disposition to the stage, Ruirui had to break through “traditional thoughts of dance.” Instead of adhering to the smooth, stoic lines of ballet, her dancers wobble their arms and heads to mimic a preening or foraging ibis. Still, the footwork remains nimble and elegant, resulting in a performance that's both artful and realistic.

Soaring Wings, which was penned by playwright Luo Huaizhen, follows a young woodcutter who finds Crested Ibises roosting in the forest. He instantly falls in love with the leader of the flock, though not in a Swan Lake kind of way; it’s a romance built on fascination—one that many birders and ornithologists can relate to. But the charming setting takes a gloomy turn as death and destruction takes over the ibises’ world. The lighting dims, the backdrop goes black, and the birds shed their plumage for sootier coats.

As the show enters its second act, the feather reappears in the spotlight. This time, a ring of dancers takes turns tossing it into the air, catching it before it kisses the ground. The scene is as mystifying as it is revealing. “The feather displays the attitude of humans towards nature,” Ruirui says. By shifting from the careless warmth of a farming village to the sterile severity of a modern city, “the drama shows the erosion from the former life to today.” In the process, “[animals] are dropped and they disappear; it is the way we express our gradual unawareness of natural species.”

But in the end comes hope, as a new class of conservationists emerges. In the penultimate scene, students crowd into a museum to study an ibis behind glass, while the aged woodcutter looks on in solace. To Ruirui, he's a metaphor for all that we need to do to reverse the fortunes of the Crested Ibis. “These types of creatures could be on the edge of extinction if they’re not commemorated and protected,” she says.

For that purpose, Soaring Wings rises above its limits as a silent work of art. And though it’s been performed more than 200 times in dozens of nations, “the staging of every work does not mean the piece is finished,” Ruirui says. “The rest is done by audience and their imagination.” If the ballet proves anything, it’s that we need to better understand how we affect birds and our planet. That includes the Audubon editor in the audience.