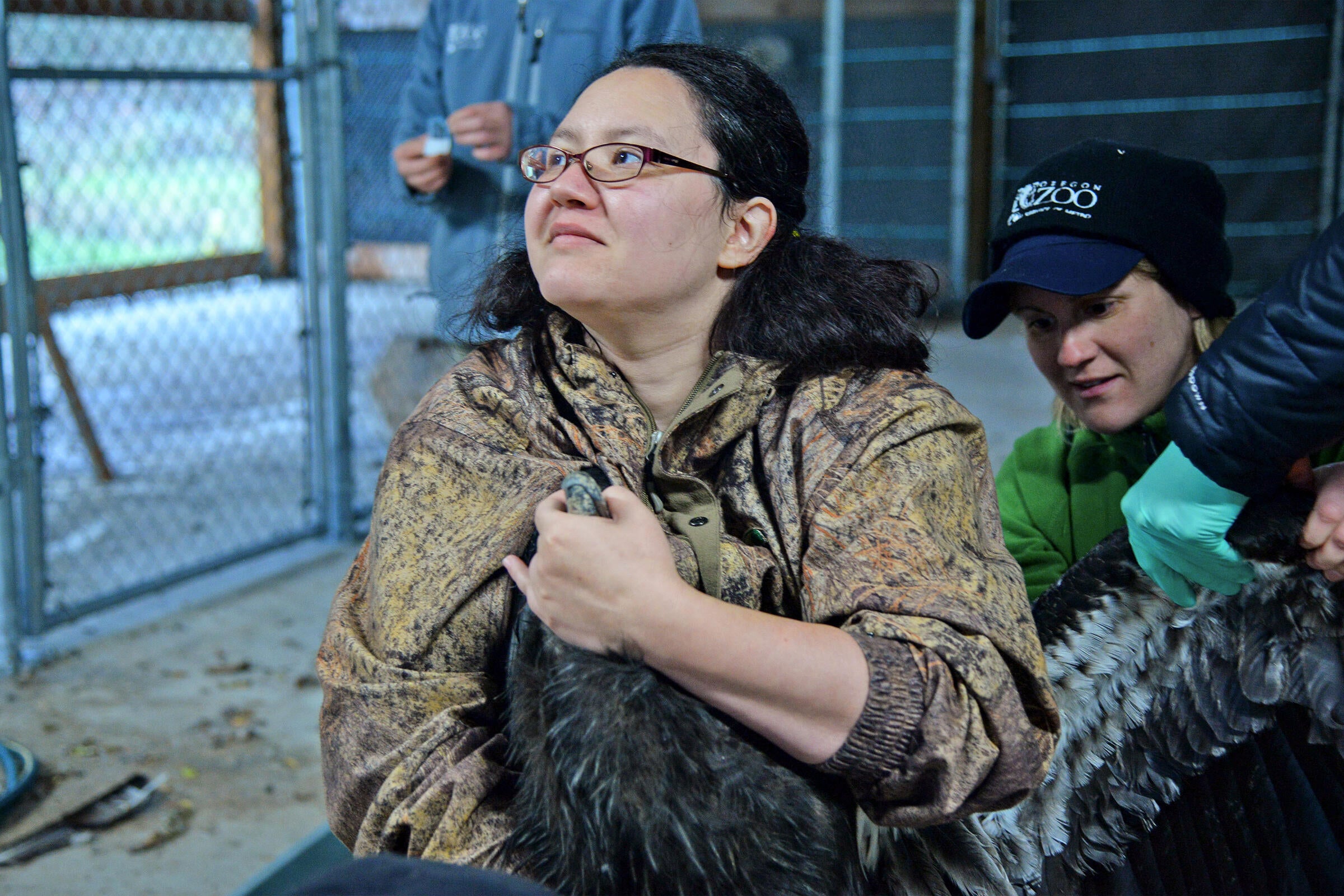 First came the ravens early in the morning. Their heavy black beaks pecked at the most vulnerable parts of the stillborn calf carcass, donated by a local rancher, laying on the prairie. Next came the Turkey Vultures, scattering the ravens before plunging their featherless red heads into their next meal. Later in the morning, once the air had warmed and the canyons had shrugged off their mist, came the California Condors. They descended onto the calf, peach-colored heads reared back, feathered chests out. Their 10-foot wingspans beat the air, forcing the ravens and vultures into retreat. Now it was their turn.

"I've never experienced anything like the first time that I saw a Condor,” recalls Tiana Williams-Claussen, Yurok tribal member and director of the tribe’s wildlife department. “You just don't have a sense of how big they are until you actually see one up close and personal.”

Williams-Claussen, hidden in a quiet observation room with some colleagues in 2008, watched the impressive raptors feast outside a condor sanctuary on California’s central coast. She had just been hired by the Yurok Tribe’s wildlife department to begin what would become a decade-long project to restore the endangered bird—known as pregoneesh in the Yurok language—to her homeland.

The Yurok Tribe is now on the eve of launching their own condors into flight next year, restoring one of the longest-living raptors to part of its historic range, which overlaps with the Yurok’s ancestral lands along the Klamath River. The program is a partnership with 16 different federal agencies, private companies, conservation and wildlife organizations, and the Yurok Tribe to bring condors back to the U.S. northwest. The Yurok Tribe is waiting on one final decision by the federal government before they’ll be in the clear to begin building condor-release facilities in Redwood National Park. It will be the first time a tribal nation has reintroduced the California Condor, and the end of a long wait—a century since the imposing birds were seen soaring across northern California skies.

The return of the condor, Williams-Claussen says, comes at the same time as a larger Yurok revival, which includes language revitalization, reclamation of water rights, the largest dam removal in the United States, and a continued effort to buy back ancestral territory.

“This is absolutely an application of our tribal sovereignty,” says Yurok Vice Chairperson Frankie Myers, who has been involved with the program since its start. “This shows that collaboration and building capacity are important for connecting our tribal governments’ will with the cultural needs of the people.”

Until that day in 2008, Williams-Claussen had never seen a condor before. But a lifetime of hearing the stories and lessons of condors had impressed on her their importance. “It’s a mutual sort of relationship,” Williams-Claussen says. Ecologically, condors are an apex species, breaking down large carcasses with their bone-shattering beaks, clearing away carrion and making food accessible to smaller birds. They form bonds and mate for life, and while they live in hierarchical flocks, they eat together, fly together, and are generally pretty communal. Traditionally, the condor is central in a number of Yurok practices like the white deerskin dance and the jump dance, both part of their annual world renewal ceremonies. Condor feathers are used in regalia, and can only be found, never taken through hunting or other means. Instead, feathers and regalia are passed down from generation to generation.

Traditionally, the condor is central in a number of Yurok practices.

California Condors once ranged from British Columbia to Baja California, and can travel up to 200 miles in a day. But the arrival of colonizers in the 19th century brought harmful practices that ultimately placed the species on the endangered species list. Birds were poached for feathers and trophies. Lead bullets lodged in carcasses they ate poisoned the scavengers (today lead is the species’ number-one threat). Artificial pesticides leached into the environment and thinned condor eggshells. By 1987, just 27 condors were left in the world; U.S. Fish and Wildlife biologists then captured the remaining birds so they could breed them in captivity and gradually reestablish a wild population. Today, more than 300 condors are found in the wild in a patchwork of populations in Baja, Mexico, the American Southwest, and southern and central California. But they’ve yet to be reestablished in northern California, where towering old-growth redwoods, low human density, and ample food from the coast provide ideal habitat for the bird.

There are parallels between the condors’ extirpation and the suppression of Indigenous lifeways by colonization, Williams-Claussen says. Up until 1978, when Congress passed the American Indian Religious Freedom Act, Indigenous people’s right to openly practice their religious and traditional dances wasn’t protected. That same year, an advisory panel on California Condors published a report that ultimately laid the groundwork for the bird’s restoration.

“Having been forcibly removed from our land, having our landscape management practices completely eradicated—it just completely reformed our entire landscape and made it untenable for species like Condor to survive,” Williams-Claussen says. “Of course, concomitantly, it made it hard for us to survive.”

Williams-Claussen never planned to work with condors. She left home in Klamath on the coastal Yurok Reservation to study biochemical sciences at Harvard; she planned to become a doctor and then return to serve her community. But it didn’t feel like the right path. Instead, after graduating from college, she enrolled in a post-graduate internship program with the Yurok Tribe. She applied for various positions, and was placed with the wildlife department, eventually becoming the first employee hired on in 2008 just as the department was starting up. The Yurok Tribal Park Task Force had chosen the condor as the single most important land-based species to return to ancestral Yurok territory, and Williams-Claussen would take part in the reintroduction program.

“It wasn’t my lifelong dream to be a wildlife biologist and bring Condor home, but it was my dream to help restore the Yurok people,” Williams-Claussen says. “This is a very powerful way to do that.”

For Williams-Claussen and her colleagues like wildlife biologist Chris West who leads the condor reintroduction program, the past 12 years have been committed to studying viable habitat and learning how to care for the intricacies of individualistic yet community-oriented birds. They’ve also had to build a lot of relationships. Condors range over hundreds of miles, which makes their reintroduction unlike other species that may stay in one national forest or park. Redwood National Park officials have held meetings as far north as Portland, Oregon, and as far south as Sacramento, and have consulted with more than 60 tribal nations about the project. Other tribes have programs in the works, too: For the past few years, the Nez Perce Tribe have been working towards releasing condors in Hells Canyon in eastern Oregon.

Dave Roemer, deputy superintendent of Redwood National Park, says it was a unique process; they don’t often hold hearings so far afield, nor do they typically receive such a passionate, positive response. Every venue, from Eureka to Medford, filled its seats. “It was just so powerful to see so much enthusiasm and emotion and support,” says Roemer, who has been involved with the project for nine years. “There's not too many projects that I'll work on in my career that will be that important to people.”

No significant opposition stymied the project through the years, but compromises were made. The reintroduction of an endangered species can be controversial because of the regulations and demands it makes of industries like timber, power utility companies, and private property owners. To assuage that, the program is proposing the released birds be classified as “experimental,” meaning they won’t have full legal protections under the Endangered Species Act. Should the worst-case scenario happen and the flock in northern California wink out, it won’t affect condor populations already established in other areas. But Williams-Claussen doesn’t expect that to happen because of the birds’ adaptability as a generalist species. “They really are a species that can thrive in a diversity of systems,” Williams-Claussen says.

Now the tribe, in collaboration with U.S. Fish and Wildlife Service and the National Park Service, is nearing the end of a three-year-long National Environmental Policy Act process analyzing the possible environmental impacts of condor reintroduction. So long as a positive decision comes through soon, the Yurok may receive their first condors as early as 2021. The condors will be kept in enclosures in Redwood National Park for three months to socialize and form the bonds of a flock. Once they’re released, a new phase of the project will begin. They’ll be six to eight years old before they begin breeding, and biologists will regularly assess the health and vitality of the flock over the next few decades.

In the meantime, Williams-Claussen, who is now getting her masters in natural resources with an emphasis in wildlife at Humboldt State University, will provide regular progress updates to tribal elders, who she hopes will soon see condors in the sky during their lifetime. “We’re doing it for them,” she says, “and we’re doing it for the next generation, so they don’t have to grow up in a world where they don’t know Condor.”

This Bird Lives Because She Never Quit

Jan Hamber defied the norms of her time, helped save the California Condor, and at age 90 is still blazing a trail for other women scientists.