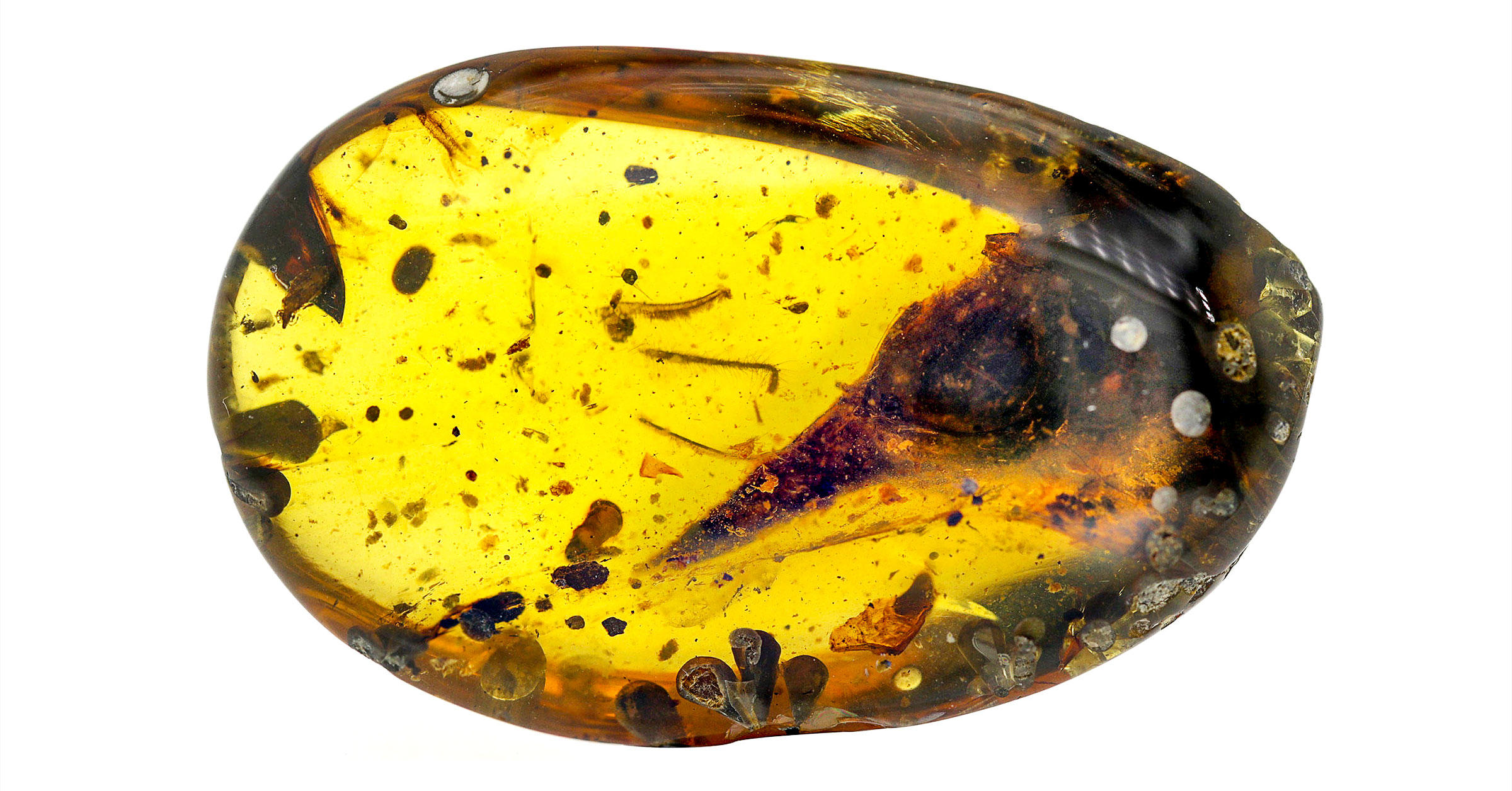 The teeny skull, from a bed of 99 million-year-old fossils from Myanmar, suggests bird diversity was vast before the dinosaurs went extinct.

UPDATE July 27, 2020: Last week, on July 22, the authors retracted the paper, published in Nature, describing this fossil as a dinosaur. Later analysis suggested it was a lizard. If it's a lizard, and not a dinosaur, that means it was not an ancient bird. Please read this story with caution.

When paleontologist Lida Xing first examined the piece of amber, he knew he had something special on his hands. Trapped inside the 99 million-year-old hunk of fossilized coniferous tree resin, which weighs about as much as a ping-pong ball, was a teeny skull smaller than a U.S. penny. It looked like “a tiny arrow,” he says. “It was too strange. With a long beak and big eyes, only birds have such characteristics.”

He showed a photo of the specimen to his former research advisor Xu Xing, a professor at the Chinese Academy of the Sciences in Beijing who has discovered more dinosaurs than any other living paleontologist and specializes in those with feathers. “After watching the photo for two or three minutes without talking, he kept thinking, and then told me that this is a very special specimen,” says Lida Xing, who’s also based in Beijing at the China University of Geosciences. “He was very surprised.” (Lida sent written comments over email, as he’s currently under quarantine for coronavirus in a town with poor cellular service.)

The paleontologists were so impressed because the specimen was smaller than any they'd seen from the Mesozoic era—the age of dinosaurs, which stretched from 250 to 65 million years ago and includes the Triassic, Jurassic, and Cretaceous periods. Named Oculudentavis khaungraae, the fossil is one-sixth the size of the next-biggest known fossil bird. What’s more, the skull is slighter than that of the Bee Hummingbird, the most diminutive bird living today which lays eggs the size of coffee beans in a one-inch nest. Somehow, this ancient bird was even smaller.

The find is the latest from a trove of amber mined in Myanmar. Known as a Lagerstätte, or “mother lode” in German, this fossil bed serves as an unparalleled window into life in a tropical forest 99 million years ago. At this site, Lida Xing has personally discovered a bird hatchling and feathered dinosaur tail encased in amber. Other researchers have found lice-ridden dinosaur feathers, as well as lizards, frogs, snakes, snails, and various insects. This sort of fragile, miniscule material, which is rarely fossilized, is revolutionizing our view of avian life before the mass extinction event that killed the dinosaurs.

“It’s really fascinating, the stuff we’re getting out of this amber,” says Amanda Falk, an avian paleontologist at Centre University in Kentucky who was not involved in the new research. “It backs up something that I’ve thought for ages, which is that birds had a crazy radiation in the Mesozoic.”

For a long time, scientists believed that birds were a relatively new invention when an asteroid struck Mexico’s Yucatan Peninsula and wiped out all other dinosaurs. But these new finds, Falk says, suggest that there was a diverse array of ancient birds that lived alongside the dinosaurs. Their lightweight bones, as well as soft parts like skin and feathers, simply weren’t preserved like the enormous dinosaur skeletons on display in museum halls.

“The sheer amount of diversity we had in the Cretaceous, in Aves [the order of birds], is amazing,” she says. “You had birds doing all kinds of stuff. We even had even really tiny birds like we have today.”

Oculudentavis, which means eye-tooth bird, has some unusual features for birds of its time, including two outsize eye sockets. A commentary published alongside the new research in Nature suggests that the eye structure “provides strong evidence that Oculudentavis was active in well-lit, daytime environments.” The skull has a long beak lined with numerous tiny teeth on both the upper and lower jaw. Based on that, “it’s a safe assumption to say this thing is eating arthropods” such as insects, Falk says. The beak and skull are too fragile to crack open seeds, and while fossil dinosaurs with this many teeth often eat fish, “with something this small, I don’t think that’s a feasible option,” she says. “But they’d be great for crunching through a beetle carapace.”

Unfortunately, the skull is all we have. Falk, who specializes in dinosaur feet, wishes she could see its hindlimbs. “The feet can tell you a lot about what kind of life habit it had,” whether it lived in trees, on the ground, or swam. Likewise, she’d love to see the wings. “Is it an aerial insectivore?” Falk asks. “We don’t know because we don’t have the wings.”

Its appearance, though, makes it pretty clear that it’s a bird, and the paleontologists placed the fossil in the family of Aves on a suggested family tree. Though, to them, the distinction between bird and dinosaur isn’t so grand. “Birds are dinosaurs,” Lida Xing says. “But this specimen is so special. In fact, it has some characteristics that do not belong to birds or even dinosaurs.”

A Chinese fossil suggests that some feathered dinosaurs flaunted glamorous getups to rival the colorful displays of modern birds.

How Birds Survived the Asteroid Impact That Wiped Out the Dinosaurs

Today’s great diversity of tree-dwelling birds can be traced back to small ground birds that survived global forest destruction.